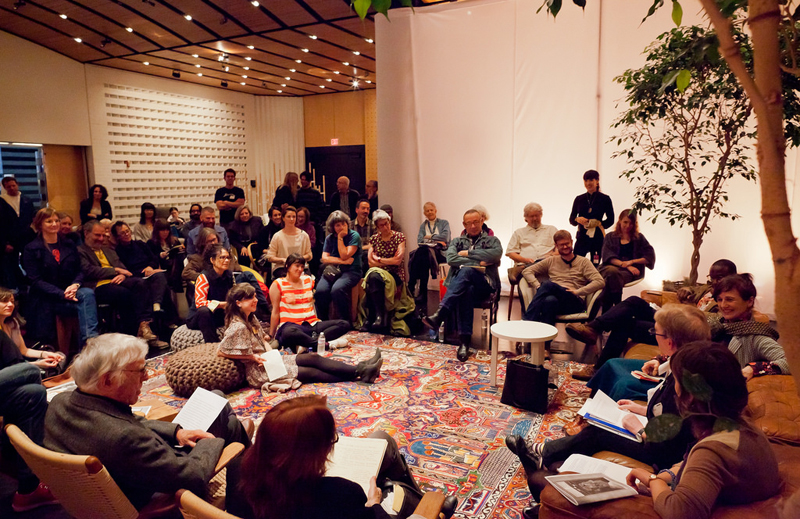 In the summer of 2011, I was charged with creating a large-scale public program to complement the landmark exhibition The Steins Collect: Matisse, Picasso, and the Parisian Avant-Garde. The show reunited the legendary early collections of the Stein families — writer Gertrude Stein and her companion Alice B. Toklas, Leo Stein, and Michael and Sarah Stein — and gave audiences an intimate view into the lives of these American expatriates in Paris in the early twentieth century. I conceived of a massive living room to be installed in SFMOMA’s generally dreary but quite large Schwab Room on the first floor of the museum. There, we’d produce a day-long salon to commemorate the legendary Saturday salons in Gertrude and Alice’s apartments at 27 rue de Fleurus, exclusive gatherings of the avant-garde artists and writers of the time, often considered the crucible of modernism.

In keeping with the spirit of those informal gatherings, Gina Basso and I invited artist and curator Margaret Tedesco to host our salon, and to collaborate with us in programming it. Margaret has lived in the Bay Area for decades, and in addition to her work as an artist, taught for many years at the San Francisco Art Institute. From 2007 to 2017, she ran the salon-style space [ 2nd floor projects ] in the Mission District (it now operates as a pop-up gallery). [ 2nd floor ] has a distinguished program of presenting exceptional exhibitions by artists from the Bay Area and around the world, and Margaret is also a publisher, creating a limited edition chapbook or broadside as part of every exhibition: each time, she invites a writer to create new work, not in service as essayist or courtside commentator, but as artist in their own right. We knew that Margaret’s long history of organizing intimate gatherings with artists and writers, as well as her deep ties to so many different kinds of cultural producers in the Bay Area, would make her the ideal host; she didn’t disappoint. She suggested we invite a range of artists of all kinds, filmmakers, writers, poets, dancers, and historians to entertain us with their personal recollections of Bay Area avant-garde histories. The cast list she dreamed up included the young filmmaker Barry Jenkins (pre-Moonlight), legendary poet/documentarian/KQED exec Richard O. Moore, choreographer Joe Goode, poet Joanne Kyger, visual artist and musician Mary Elizabeth Yarbrough, and Lucinda Barnes, chief curator at the Berkeley Art Museum, along with more than a dozen others.

To complement the conversational salon, Gina and I commissioned a special edition of TRY!, a poetry zine edited by David Brazil and Sara Larsen, and invited Jefre Cantu-Ledesma to create a new sound composition. The zine and Jefre’s CD, Conversations with Myself (citing the famous Bill Evans series), were available as giveaways for the afternoon. The Living Room itself was beautifully designed, furnished, and installed by Claudia Mahecho of SUPERNATURAL SF. In the Haas Atrium just outside the Living Room, twenty-six poets performed a marathon reading (co-organized with Samantha Giles at Small Press Traffic) of Stein’s The Making of Americans. It was an extraordinary afternoon.

I am very pleased to be able to share the recordings from that day with you (and photos of the event can be found here). The histories and conversations are moving, often funny, tales of underground, off-grid, nascent, and pre-established antics and practices around the Bay Area, from the people who lived and breathed these scenes. A lot to love and learn here; hope you enjoy.