A few times a season, we like to reach out to a current or former Open Space contributor and find out what they’ve been up to. Visual artist, writer, and scholar Duane Deterville is a columnist and last published work here in 2013. 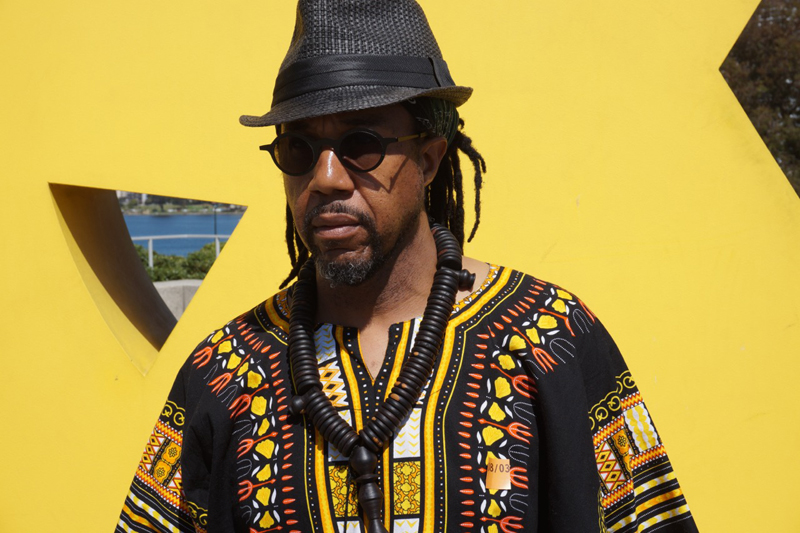 So, Duane, what have you been up to? We were excited to see you were involved with a presentation of the “Black Panther Party Serve the People” mural in Oakland recently — what else?

Yes, the Oakland Maroons Art Collective (OMAC), which I founded with artist Refa One, initiated that project. The Black Panther Party “Serve the People” mural is located at 14th and Peralta streets in West Oakland, and is the culmination of at least a year’s worth of work for OMAC. Our collective consists of me, Refa One, Rage Souljah, Kujichagulia, Chris Herod, Tureeda Mikell, and Akinsanya Kambon.  The disciplines practiced by members of the collective range from visual arts, writing, and poetry to new media and documentary film. In 2016, on the occasion of the fiftieth anniversary of the Black Panther Party, Refa One and I curated “The Point Is…” 2.0: Art Representing the Relevance of the Black Panther Party’s Ten-Point Program in the 21st Century at the Joyce Gordon Gallery in downtown Oakland. We collaborated with Akinsanya Kambon, Tarika Lewis, and the greatly respected Emory Douglas — former Minister of Culture for the BPP — who were official artists for the Black Panthers. We held panel discussions and produced a Black Panther Party Ten-Point Program coloring book that we gave away to children on a special day during the exhibit. I contributed three illustrations and wrote the introduction; we still have a few copies left for sale.

On December 4th of this year, we held a celebration for the completion of the mural project, which had been led by Refa One. It included participants like Batsh Lo, a Senegalese artist who came from Paris to work with us; Chris Herod, who made conceptual paintings for the mural; AISEBORN, who added calligraphy; Senay Alkebulan, who painted some details; and me, adding the African Adinkra symbols and ground drawing.

In addition to those projects, I was recently invited to do a talk and post-screening Q&A at the Elmwood Theater in Berkeley. I’ve been giving lecture presentations on Afrifuturism and Black Visual Culture, and have spoken at San Francisco State University for their Africana Studies department; I was also the keynote speaker at AfroLit Con in Oakland, where I talked about the same topic for a less academic audience. I’ve been invited to give that same presentation at the Berkeley Art Museum on Saturday, January 27th, 2018.

Over the last couple of years I’ve also been giving lectures and presentations centered on Black film, African diasporic visual culture, and jazz and visual culture. In 2013, I wrote a two-part essay for Open Space, “Kahlil Joseph’s ‘Until the Quiet Comes’: The Afriscape Ghost Dance on Film,” which has been quoted in at least one scholarly essay. I developed it into a paper in 2014, which I delivered at the very first Flash of the Spirit Conference in New Orleans, given in honor of Robert Farris Thompson, the legendary Yale scholar of African diasporic culture and philosophy. (I wrote about meeting Thompson in my very first Open Space post.) One prominent curator heard my presentation and was impressed enough to recommend me to do a lecture the following year on Kahlil Joseph’s video installation Double Conscience at the LA County Museum of Contemporary Art. The last time that I presented the essay and keynote slide presentation on Joseph’s work was for my one-man art residency at Jasmine Moorhead’s Krowswork Gallery in 2015. I titled my residency “Afriscape Cartography” and showed my Polaroid photo series as well as a group of my drawings; I also created a large installation drawing in collaboration with Refa One. Finally, in 2015 I was selected for the Alumni award by the California College of the Arts’ Visual & Critical Studies Department. 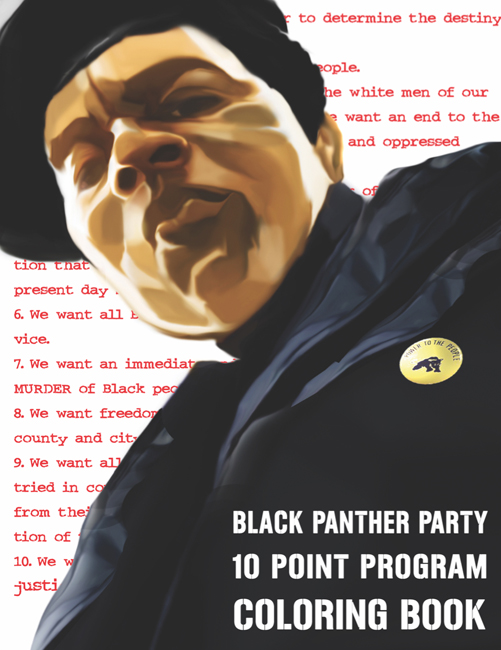 Yes, absolutely! On December 16th, 2017, I attended the highly acclaimed composer/musician Wadada Leo Smith’s Create Festival at The Lab in San Francisco. He performed several of his compositions in an evening concert that also included the Rova Saxophone Quartet. The thing that made it mandatory for me to attend that performance was the special workshop he led that afternoon, wherein he explained the musical language he created for his illuminated musical scores. He calls the language “Ankhrasmation,” and it is fascinating. The scores are in full-color, and he characterizes them as doorways to performing music. In keeping with my ongoing study of the intersection between the jazz aesthetic and visual culture, I attended the two-hour workshop and had a chance to talk to elder Smith. We both have a mutual friend in Oakland — musician/composer Oluyemi Thomas — whom I interviewed about his illuminated musical scores in 2012 in a three-part post for Open Space, “The Visual as a Quickening Sound Vibration.” These artists that we sometimes call jazz musicians are much more than performers, and Wadada’s workshop was very much about how to enter life in creative ways. He explicated the ways in which the color blue manifests in nature and how that relates to what we are as individual human beings. The score that he used to demonstrate his musical language was predominantly blue, and it made me recall a succession of references to blue in a stream of consciousness. Wadada is from Mississippi, which reminded me of the Delta Blues, as well as the fact that he comes from what Amiri Baraka called Blues people. It also reminded me of David Hammons’ conceptual artwork Concerto in Black and Blue, with its emphasis on blue light and its references to music.

Throughout many of your contributions to Open Space, your love for music — especially jazz — is clear (“Giving Full Attention to a Film without Pictures” being but one example). What music has been informing your art and writing of late? Or have certain works of art led you to new or familiar music?

Great question! I have to say that, most recently, the music of Kamasi Washington has been informing both my art and writing. So far mostly in an indirect vibrational sense, but that’s good. That’s how it starts before it becomes this full-blown, directly informative thang. Certain compositions on Kamasi’s album The Epic have brought me to tears. I see him as part of the lineage of Black musicians that are tapping into an intimately spiritual sound, like John and Alice Coltrane, Pharaoh Sanders, Archie Shepp, John Carter, and Bobby Bradford. The Epic also has me thinking about the fact that it is inspired by a graphic novel that Washington is writing, and so exists at the intersection between jazz and visual culture. Washington recently released an EP in tandem with a video multimedia piece, Harmony of Difference, that  was part of the 2017 Whitney Biennial. The A.G. Rojas-directed video is interesting in the way it referencs legendary photographer Roy Decarava’s images of jazz musicians. So yet again Kamasi has captured my attention with a combination of jazz and visual culture. 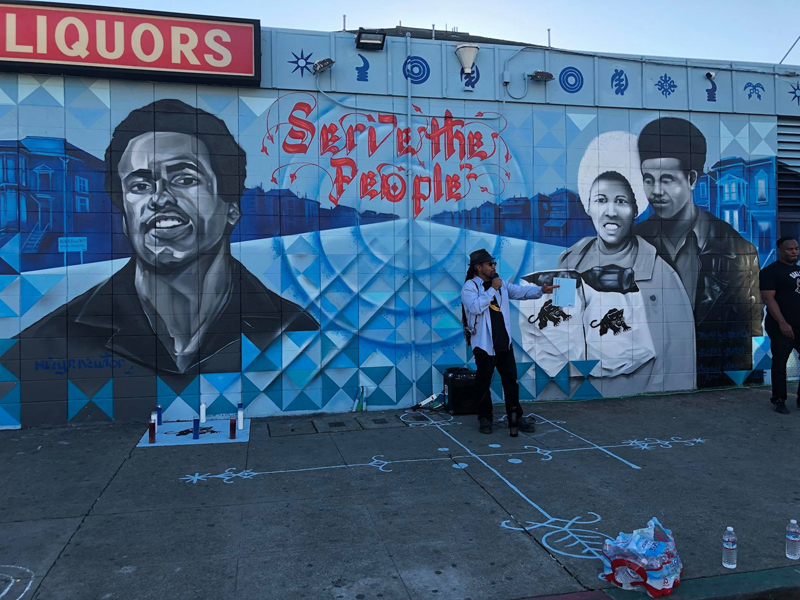 We know that last year you attended a couple art festivals in Dakar, Senegal. Can you tell us a little about your time there, and if any artists or works in particular stood out for you?

I was invited to the Festigraff gathering of spray can artists in Dakar as part of the AeroSoul Arts organization, which was founded by Refa One; I attended in the capacity of administrator and writer for AeroSoul Arts. Refa had created a working relationship with Senegalese artist Docta, who founded Festigraff a number of years ago. In turn, Refa invited Docta to Oakland to participate in the AeroSoul Arts exhibit here in the Bay Area, and by doing so solidified their African/African diasporic artistic collaborations. Anyway, I went on my first trip to Africa in the best circumstances that I could imagine. There are so many good experiences that I’ll have to only give you a couple.

Of the artists who stood out for me, the spray can artist Mad Zoo Fall was the most impressive. He won my undivided attention and brotherhood by painting a mural portrait of Léopold Senghor (one of my favorite poets and the first president of Senegal) and writing a dedication to me on it. So there’s a mural of Senghor in Dakar dedicated to me.

Even though I went to document murals and write for AeroSoul Arts, I was at one point asked to pick up a spray can; I painted a portrait of the great Pan-Africanist revolutionary Amílcar Cabral on a wall by the highway in Senegal. I smile when I think of it, because brotha Refa played one of my favorite compositions by Miles Davis while I was painting. Listening to “Calypso Frelimo” (a piece Miles named after Pan-Africanist revolutionaries in Mozambique) while painting a mural of Cabral on a wall in Dakar is one of the most beautiful experiences I’ve ever had!

I curated an exhibit at the San Francisco Main Library this month titled If Superpowers Could Save My Community. The exhibit features the artwork of San Francisco-based incarcerated youth who I taught along with Refa One. We created an art project that instructed the youth on how to create comic book covers that depict superheroes of their own invention. Their artwork is currently on show in collaboration with the Black Comic Arts Festival happening on Martin Luther King Jr. Day Weekend and will be on display through April 5th. In addition to the aforementioned lecture at the Berkeley Art Museum, I’ll be doing a similar presentation at the Berkeley Public Library in February that will focus on the Marvel Comics superhero Black Panther, in anticipation of the forthcoming live action movie about him. I’m also teaching a class this year at San Francisco State University’s Africana Studies department called “Black On-line: Cyberspace, Culture, and Community,” focusing on the interaction with and early use of the internet by Black people. With all of the controversy surrounding net neutrality I expect it to be a very lively class.

I have a couple of essays that I plan to complete for Open Space in 2018 that cover some of the topics mentioned above. And I’ll be going to Senegal again this year for Festigraff and the Dak’Art Biennale. Look for essays reporting on my experiences there on Open Space as well.