Giving Full Attention to a Film without Pictures

Duane Deterville is one of our three art-and-conversation hosts for SLOW ART DAY, April 27. 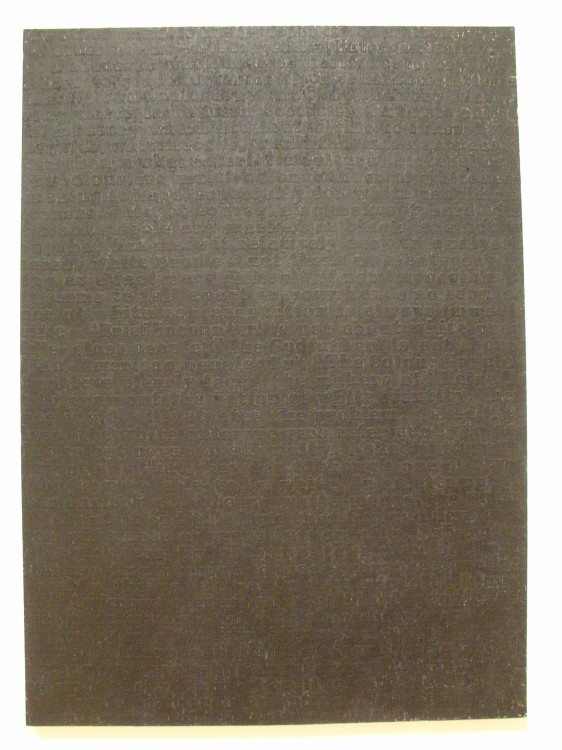 I oftentimes look at artwork that seems to evoke a sound. Music, dialogue, or other implied sounds. A few pieces that I’ve viewed at SFMOMA over the last few years that play sounds in my head are David Hammons’s Basketball Drawing, James Weeks’s Two Musicians, and Raymond Saunders’s piece titled Bird/Charlie Parker. Bouncing a basketball on the street and subsequently bouncing the same basketball on a large sheet of paper was the inventive technique Hammons used to make his Basketball Drawing. The grime from the street was used as the material for the gray drawing. Upon close viewing the print from the basketball emerges from the overall cloudlike feel of the piece. The affect years ago when I viewed it up close was to hear the sound of a bouncing ball as the image of the basketball prints became more visible. With its trio of storefront church crosses dominating the upper third of its composition, Raymond Saunders’s Charlie Parker — formerly titled Bird — makes me hear the black sanctified church as much as bebop.

Anticipating my role as a host/discussion moderator for SFMOMA’s Slow Art Day on Saturday, April 27, I wanted to give 10 minutes of undivided silent attention to one of the art pieces currently on display. So I visited SFMOMA’s permanent collection with all of my usual expectations surrounding how my visual experience is connected to, imbricated in, and changed by my imaginary audio experience. My attachment to — OK, obsession with — jazz music made me want to give a late-period Piet Mondrian painting my full attention for 10 minutes. You know, one of the great examples of his early 1940s New York period when he was bumpin’ “boogie woogie” jazz music 24/7 in his painting studio — a practice that would eventually lead him to produce visual bebop in the process. So I was eagerly anticipating a 10-minute concert in my head while viewing Composition with Red, Yellow, and Blue. But when I arrived to view it the room was boarded up and curators were behind the makeshift wall hanging a new display of Ellsworth Kelly pieces.

With my intentions thwarted by chance I wandered for a little while and landed in front of Glenn Ligon’s text-heavy piece done with black paintstick on canvas, titled White #13. My first inclination was to stand silently for 10 minutes, experience it as an inscrutable black abstraction, and wait for sounds to start playing in my head. But as my eye caught a word or phrase I heard dialogue that made me step closer to “hear” what was being said. Upon close examination Ligon’s painting reveals a few insights. The text in his painting is taken from an essay by film theorist Richard Dyer, and it references at least two films in an effort to describe the ubiquity of white bodies in visual culture: The Godfather and The Color Purple. One small section says, “… The Godfather is not about white people in America …” Another says something about “Jewishness,” but the way that I experienced these blacked-out, paintstick-covered words was as fragments of a conversation or a disembodied narrator for a documentary film. The text was voiced in my head sometimes as male and at other times female. Being both fascinated and frustrated by the way that the text would reveal itself only at certain viewing angles I found myself searching its surface in silence well past my intended 10 minutes. I finally broke away from it — both a little disappointed that the jazz concert that I wanted to hear got replaced by the dialogue in my imaginary film without pictures, but also feeling rewarded with an experience that I wouldn’t have had without giving my full attention to Ligon’s painting.