What is the canonized art piece that most occupies your imagination and how do you re-interpret its meaning in your own personal way?

With this first entry I’m not only introducing myself and demonstrating the unapologetically Africanist lens that I often use for experiencing visual culture, but also inviting my readers to share their personal way of experiencing and interpreting art. The story of my trip to New York this past July might just do both. I was invited to show my artwork in a show called “Negritude” by writer/curator/musician Greg Tate. While I was there I had the pleasure of being guided and toured by scholar/curator/photographer/researcher/professor C. Daniel Dawson. Danny Dawson has worked as a curator and educator for well established institutions like the Studio Museum of Harlem, Jazz at Lincoln Center, The Caribbean Cultural Center and Columbia University just to name a few. He specializes in African Diasporic cultural expression. Danny invited me to come with him and his friends Robert O’Meally, the Director of the Center for Jazz Studies at Columbia and Adam Rudolph, a Jazz musician that has worked with Herbie Hancock and Yusef Lateef amongst others, in a car trip up to Yale to visit the great scholar of African Art and Philosophy Robert Farris Thompson. The trip to Yale gave me the unexpected opportunity to view an art masterpiece. 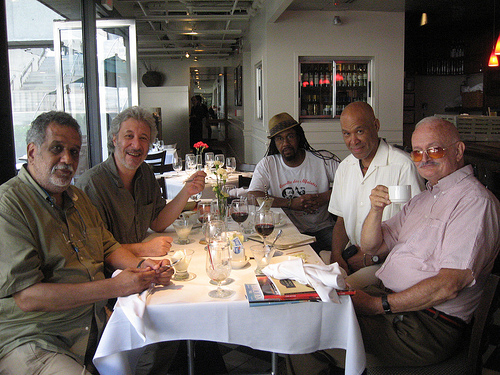 We all have a personalized method of looking at art and often times we don’t trust our method when we encounter an Artwork with a capital “A.” You know, one of those canonized masterpieces that are written about for over half a century or more.

I find it interesting that nearly everybody in the western world has seen one of these art pieces and has some experience of them, usually through reproductions. A lot of us are carrying around an image of these paintings in our imaginations. Of course when I talk about ‘the canon’ I’m discussing the European western canon of artworks by predominantly white male artists. “The Mona Lisa”, Picasso’s “Three Musicians…” You get the picture. Literally. If you’re inexperienced with interpreting these pieces you are beholden to the explanations in the museums that show them or the books that have been written about them. They may end up looking like images of far away distant places that have little relationship to us. A way of retrieving our own cultural perspectives and cultural narratives through viewing these works of art is to attach the narrative of our own experience to those art pieces in order to understand them.

The story of my recent encounter with a canonized work of art that has occupied my imagination for decades is an example of how we can experience artwork that has a mass of definitions already surrounding it from the vantage point of our own cultural perspectives. The car trip from New York to New Haven, Connecticut and the lunch with Professor Thompson deserves a blog entry of its own. This story begins after the lunch when I got to see one of my favorite paintings with three viewers that are profoundly affected by African and Afri-Diasporic cultural expression. The Yale University Gallery across the street from the restaurant is where I saw in person for the first time Vincent Van Gogh’s painting “The Night Café.” As an Africanist one would think that my special canonized masterpiece would be a piece of African art like the 16th century Nigerian Edo/Benin Ivory mask that was used for the Festac 1977 Festival poster or the Liberian Hornbill Mask of the Poro Society in the De Young Museum’s African art collection. Basquiat’s “Boy and Dog in a Johnny Pump” was another piece that I obsessed about, but before I became aware of any of these pieces a painting created by Van Gogh in September of 1888 titled “The Night Café” fascinated me. My first encounter with the painting was as a teenager looking at reproductions. I read about it in “Dear Theo” Van Gogh’s published correspondence with his brother, bought postcards and prints of it. But, I had never seen the piece in person. 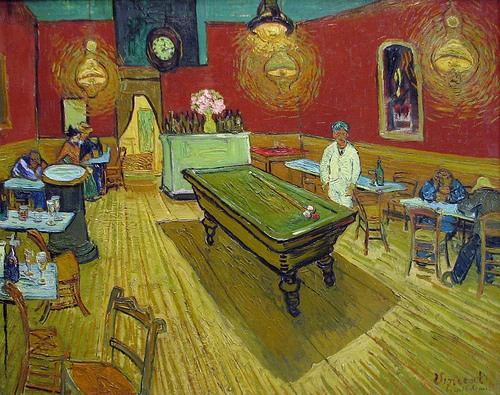 After our inspiring lunch with professor Thompson I noticed that we were directly across the street from the Yale University Art Gallery. I knew that the painting was in their collection because I had seen it listed so many times on postcards and prints. I guess the look on my face, as if I was about to see some charismatic holy man, lead my friends to indulge me in going across the street to view the Van Gogh. When we got to the third floor and saw the piece, it was better than I could imagine. Reproductions don’t do it justice, but the great advantage of the experience was viewing this work with a Jazz musician, a literature professor who is an expert in Jazz studies and an African Diasporic scholar. Adam Rudolph, the Jazz musician, viewed three of the gas lamps depicted in the painting that hang from the ceiling as eyes peering back at the viewer. For me his observation meant that since there are three gas lamps depicted in this manner, the painting has a “third eye.” Robert O’Meally, the literature professor came up with the gem of a description that opened up new doors of perception for me. O’Meally called The Night Café a “Blues painting.” Playing with the notion that the painting could be interpreted in a blues rooted aesthetic usually associated with Black folks, I mentioned that the clock in the background was ten minutes past twelve. You know, “Round Midnight” referencing Thelonious Monk’s Jazz standard composition. I thought yeah, Blues-like because the colors imply gaiety, yet the scene is one of depressed isolation verging on madness. The scene populated by drunks and night dwellers possibly on the precipice of committing a crime is expressed so eloquently that we can’t keep our eyes off of it. It seems to be a way of negotiating the madness depicted in way that conquers it. The best of the blues does the same. It depicts a narrative of isolation or tragedy with such simple eloquence that it momentarily conquers those conditions. I like the idea, the freedom, that one can see Blues people in a 19th century European painting.

We need to give ourselves permission to have personalized/ subjective readings of canonized works of art. The gaze of non-western perspectives on the European and Neo-European canon may be a way of unseating (dethroning?) the European canon of art. Decentering it in a way, which allows other narratives to enter the aesthetic conversation with autonomy (on its own terms). We remove the Euro-Canon as the Art critique Panopticon.

Tell me, what is the canonized art piece that most occupies your imagination and how do you re-interpret its meaning in a non-canonical way?