Kahlil Joseph’s “Until the Quiet Comes”: The Afriscape Ghost Dance on Film

I’m still looking at Kahlil Joseph’s film “Until the Quiet Comes.” Released in September of 2012 and more recently the 2013 recipient of the Sundance Film Festival’s Short Film Special Jury Award – it is presently my favorite piece of art. The consensus of opinion amongst my peer group is that Joseph’s short film is pure genius. But beyond that, it seems to have touched and strummed a chord of emotion in some of us that is beyond the words that we normally use to describe a film. So, what I’m about to do with this essay is -partially – to publicly work through my current obsession with its magnetic imagery and to provide an explanatory legend for the part of the Afriscape that it maps with those images. This is part one of a two part essay.

“Until the Quiet Comes” – with music by Flying Lotus – is the latest of filmmaker Khalil Joseph’s collaborative work with contemporary musicians. They’re not music videos as much as short films enhanced by contemporary music. Joseph’s past collaborations have been with progressive hip hop artist Shabbazz Palaces and the Afri-Brazilian musician Seu Jorge. We can safely say that he is somewhat aware of African diasporic spiritual practices and cosmology because he titled one of his previous films starring Seu Jorge, “Oshun and the Dream.” “Oshun…” being a prominent feminine African/Yoruba deity found throughout African diasporic spiritual traditions in Brazil, Cuba and the U.S.

In Oakland, musician/filmmaker Adimu Madyun AKA Wolfhawk Jaguar has produced several impressive films that more explicitly use African diasporic religious themes for his recent album titled “Hunter Poetry.” Not only do his films access African diasporic Yoruba religious content and imagery, they also oftentimes profoundly utilize the words and services of local Yoruba religious priests and priestesses. There may very well be a renaissance of Afri-diasporic spiritual consciousness emerging from contemporary Black music, its dance performers and its attendant films. Another of the engaging additions to this renaissance is the series of films produced by YAK utilizing the talents of the dance group Turf Feinz.  This Oakland dance group turns abandoned houses in Black neighborhoods into temporary performance spaces dedicated to fallen community members. The film that they dedicated to Kenneth “211” Ross who was gunned down by Police in Oakland is a primary example. If there is one major identifiable common denominator present in these films it is the notion of ancestor veneration or respect for the dead.

As we will see, the film “Until the Quiet Comes” also has this respect for the dead but is unique because of its brevity. Clocking in at just 3 minutes and 50 seconds – it reminds me of the profoundly epic experience that a few unique AM radio broadcast era singles could deliver in just a few minutes. Some of us can remember the first time that we heard “When Doves Cry” by Prince or Stevie Wonder’s “Living for the City.” They created a narrative Odyssey in just under 4 minutes that could take you on an epic journey far away from the spot near a radio that you had just heard it. “Until the Quiet Comes” does the same thing in the visual field.

If we examine the narrative spaces depicted in this film with what I call an “Afriscape” critical lens, then we can interpret the images presented to us in a way that makes clear their affinity with African metaphysics.  A short definition for the Afriscape would be the deterritorialized cultural presence of Black/African people anywhere in the world.  The Afriscape is a contiguity of African cultures that acknowledges commonality viewed from varying subjective critical lenses and sensibilities. These Afriscape sensibilities give us the ability to map meaning in these images – gradually unpacking the deceptively simple and oblique narrative to reveal the cosmic scope of their implications. Those implications are present with the very first image in Joseph’s film. 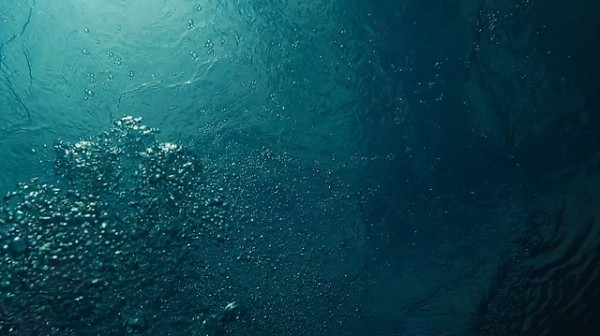 The image of water that opens the film to the voice of singer Erykah Badu – and that recurs in several places – seemed inscrutable before several viewings. After its first appearance it began to speak volumes by the way that it recurs in the beginning, middle and end of this film. In a film that so poignantly depicts death and life, an Afriscape understanding of the body of water as an image reveals things that take on cosmogenic proportions. When we apply an understanding of traditional central African cosmology to Joseph’s film (A perfectly appropriate approach when used to describe cultural expression in the Black-Atlantic diaspora.) we know that the image of water symbolizes the barrier between the living and the dead. Kalunga is what the Bantu-Kongo of central Africa call the barrier between the world of living and the world of the ancestors. [i]The image of Kalunga is graphically depicted in a circular cosmogram with a cross in its middle that is found in so many Kongolese sculptures and religious objects as well as ground drawings used in ritual practice throughout the African diaspora. The horizontal line that divides the top of the circle from the bottom is the Kalunga line and it is often characterized as a body of water. The four points at each end of the cross designate the cycle of a soul’s existence starting with the bottom side that represents all beginnings. Next is the right side representing birth – moving in a counter-clockwise motion to the top point that indicates maturity, and then (not finally) to the left side that indicates death. The bottom point below the Kalunga line also indicates dwelling in the land of the ancestors. And so, the cycle is continuous. 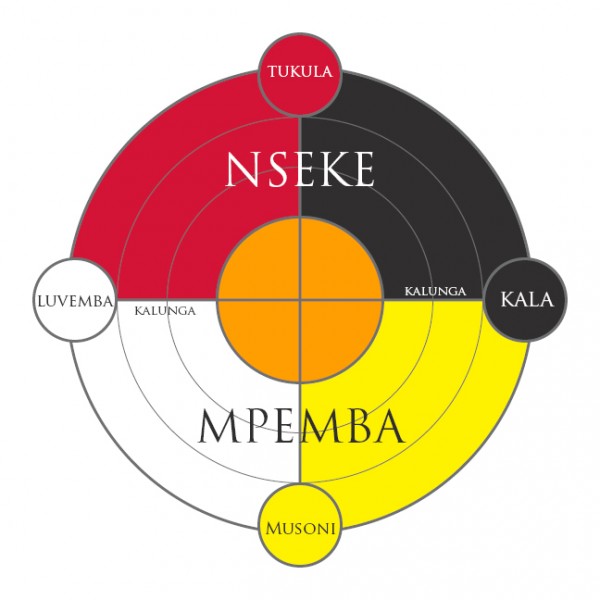 A diagram of the KiKongo Cosmogram found in Central Africa

These points on the Kongo cosmogram are important to remember as we map the Afriscape narrative spaces in this film – beginning with the opening scene of an empty round swimming pool and a young boy standing in the right hand (birth) side of the circle motioning with his finger as if to fire a gun parallel to the Kalunga line and striking the left hand (death) side of the pool’s circumference. His action seems to instantaneously bring on his own death by being felled with his own imaginary bullet. This scene is one reason that at least two of my fellow artists are not capable of repeated viewings of this film precisely because it hits too close to the home where real life tragic memories dwell. [ii]The place where seeing a child bleeding on the sidewalk stays with you forever and the sound of a mother screaming at the sight of it will never leave you. 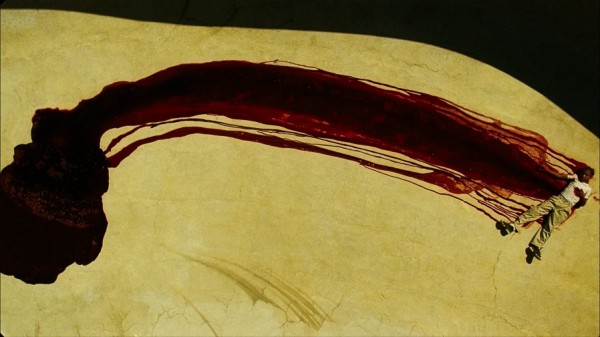 Still from Kahlil Joseph’s film “Until the Quiet Comes”

Part two of this essay covers the most dramatic aspects of “Until the Quiet Comes” and completes a deeper explication of this contemporary Black film through a critical lens informed by Bantu Kongo philosophy. Look for it this weekend.

[ii] The first draft of this essay was written prior to the tragic incident of gun violence that happened December 14th, 2012 in Sandy Hook, Newton, Connecticut. That incident is relevant to this image in Kahlil Joseph’s film because the public and governmental response to it underlines the amount of gun violence that black children have been subjected to for generations now without national outcry. In fact, when children are victimized by gun violence in Black communities like the Nickerson Gardens Projects the prevailing response from the status quo is to use it as a reason to further vilify Black communities as inherently violent.