Series Shifting Terrain
Shifting Terrain
Series
Organized by Rachel Jans + Claudia La Rocco
Organized by Rachel Jans, assistant curator of painting and sculpture at SFMOMA, the Shifting Terrain exhibit (October 5, 2019–March 8, 2020) features work by artists who gained attention in the 1970s, including Helène Aylon, stanley brouwn, Terry Fox, Joan Jonas, Charles Gaines, Michelle Stuart, and Zarina. Dedicated to works on paper, the show highlights how artists investigate and unsettle the construction of the self, history, and place; some pieces consider how place is marked and made, while others accentuate the energy and physical process of making art. For this series, we invited three artists whose practices resonate with these themes to visit the galleries and create works inspired by their experiences of and reflections on the artists and work therein. A text by Rachel concludes the intergenerational and interdisciplinary conversation — for now. 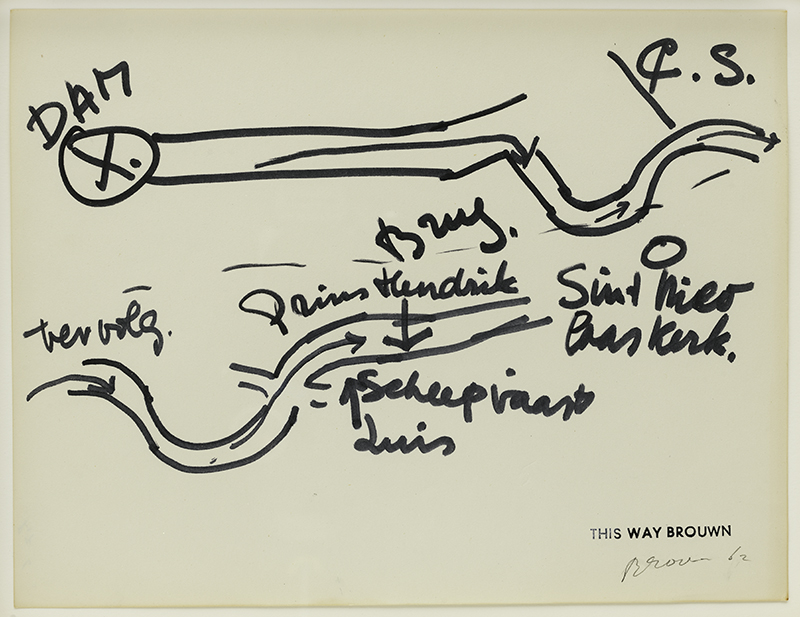 On a piece of paper, perhaps from a notebook, is a drawing swiftly sketched with a black marker, mapping out directions from point A to point B. Stamped on the bottom right corner is THIS WAY BROUWN. stanley brouwn did not make this drawing, nor the hundreds of others produced in this series between 1960 and 1964. They were made by passersby the artist approached on the street, asking for directions to particular points in the city. Rather than proclaiming that everyone is an artist, brouwn simply called upon the everyday skill — one swiftly disappearing in our time — of drawing a map. The results elegantly anticipate the art of social practice and participation, reminding of the power of the ordinary (or shall we say pedestrian) to connect us with one another and guide us through this uncertain world.

We do not know whether brouwn was lost when he first began instigating these hand-drawn maps. He had been in Amsterdam for a mere three years, having arrived in 1957 from Dutch Guiana, which would not gain its independence from the Netherlands until 1975. He must have been sensitive to the relationship between insider and outsider, between colonizer and the lived experience of colonialism. Through unassuming yet radical methods, brouwn put pressure on these profound relationships. His requests were generative, giving rise to moments of potential openness and hospitality between strangers. In this and other practices (such as the “sb step” in which brouwn measured distance with the length of his foot), he used absolute simplicity and unflagging persistence to create an alternative to the mapping and demarcation of space by nations and empires.

The works marked THIS WAY BROUWN constitute an archive of brouwn’s many pedestrian encounters, a collection of memories and recollections, a catalogue of directions and places. In the 1970s, creating and amassing data became a guiding principal, the beginnings of which are on view in Shifting Terrain. In two sets of drawings, brouwn logged his total number of footsteps while visiting Milan and Turin with the aid of a hand counter. He noted his daily steps on individual index cards (a form of organizing knowledge that dates to the seventeenth century), placed them in plastic sleeves, and put them in black binders. As the project continued, brouwn stored new cards in cabinets, creating a systematic record of his distinctive daily life. 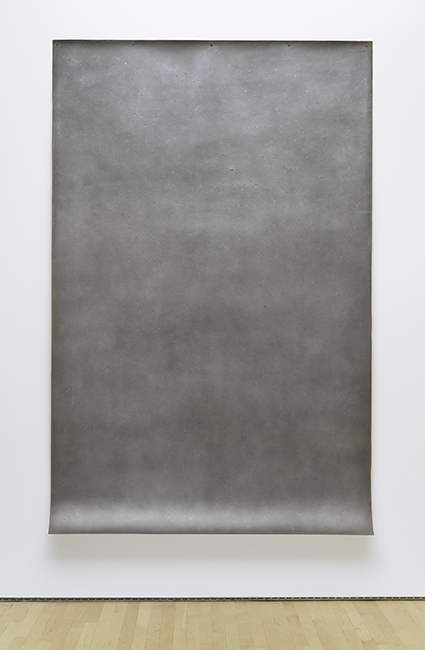 The material structures Michelle Stuart adopted similarly lay bare her conceptual stakes. Her “earth rubbings” take the form of large hanging scrolls and handmade books, which she produced to create, document, and share histories and impressions of place. Inspired by early explorers, Stuart often traveled long distances in her surveys of pre-Columbian cultures and the natural world. Passing through the Guatemalan village of Zacapa under cover of darkness in 1979, she asked her driver pull to the side of the road: a chunk of raw graphite caught her eye, and she gathered this crystalline carbon along with handfuls of soil, stowing the earthen matter in her car. The eventual result of this excavation, on view in Shifting Terrain, is Zacaba (1979), a luminous gray scroll pinned directly to the wall (the title of the work is possibly misspelled on account of the rushed circumstances).

Stuart’s practice plumbs epochs, referencing an ancient method of preserving and disseminating knowledge. As the scroll swoops downward, its bottom edge arcs subtly outwards, hinting at the act of unfurling, suggesting both the passage and display of time. The monochrome work displays rich hues of silver and gray, with reddish undertones of the earth shining through; the only marks to be read are the indentions of pebbles, rocks, and debris cratering its surface. Stuart’s use of graphite (associated with writing since it was first discovered in the sixteenth century) bypasses language and the figure to create a direct and sensuous record of natural history. The process of rubbing suggests the physical process of making history, and is Stuart’s adaption of frottage — a method of transferring an image on paper through rubbing — perhaps the oldest known means to reproduce archeological wonders.

A book is both permanent and portable. The artist Zarina, born Zarina Hamshi, has incorporated these characteristics in her art, transforming the book format into a repository of her memories and experiences of place. The Ten Thousand Things II (2011–14) replicates one hundred works Zarina has made throughout her long career; intimate collages on paper sheets the size of paperbacks offer a retrospective of her exploration of the impermanence of home, distilling motifs from this body of work in small yet sumptuous compositions of impenetrable black, gold leaf, and creamy paper. Featuring simplified geometric forms, including cartographic references and tasbih prayer beads, The Ten Thousand Things II reflects her far-flung life, which began in India, wound around the world during travels and studies, and landed her in the United States in 1975. 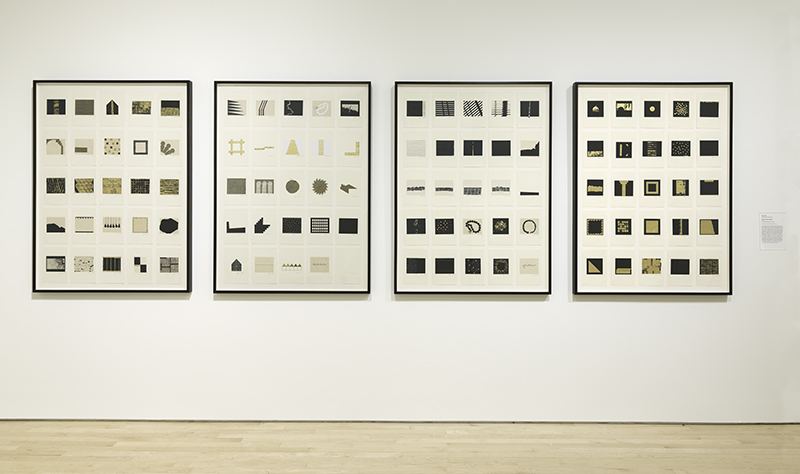 An ongoing series started in 2009, The Ten Thousand Things take inspiration from Marcel Duchamp’s La Boîte-en-valise, for which he reproduced miniature copies of his entire body of work before fleeing to the United States. While Duchamp’s tiny recreations were made to fit into a suitcase, an emblem of mobility, Zarina has stayed true to her primary medium of paper, its malleable properties supporting her explorations of displacement. Throughout her career she has immersed herself in the processes of printmaking, collage, and even papermaking, mastering techniques from China, India, Korea, Bhutan, Nepal, Japan, France, and beyond. These materials and traditional methods become vehicles for her considerations of the modern condition of mobility.

Zarina’s meticulously refined collages are arranged in a grid across four panels. The artist suggests her engagement with such orderly formations is inspired by forms long preceding minimalism, noting in a conversation with Sandhini Poddar in Zarina: Paper Like Skin that she “became familiar with grids by experiencing architecture.” Through memory and these two structures, the book and architecture, Zarina has created a compendium of places inspired by the built environment of her native India — pieced together from small bits and pieces of paper — to convey nearly abstracted maps, arches, jali, floorplans, the heavens, and the 1947 fault line dividing India and Pakistan. The partition of India and Pakistan, which split her family when she was ten years old, is perhaps the most formative event shaping her views on the ephemeral nature of home. As she reflected to Theresa Harlan in Fresh talk/Daring Gazes: Conversations on Asian American Art, “I understood from a very early age that home is not necessarily a permanent place. It is an idea we carry with us wherever we go. We are our homes.”

The spaces that surround us now continue to be freighted with uncertainty and disagreement, whether around housing, land rights, burning acres of forests, or shorelines disappearing in the stealth of the rising tides. At the same time, these places are mapped and cached in excruciating detail, stored somewhere on a cloud. The connection and contact so key to the works surveyed here serve as propositions to reconnect us to the physical world. Imagine what we could learn from immediate, sensuous, and intentional contact with the earth, one another, and the physical structures around us. If we are lucky, we might see that old methods can reveal to us new things.

To extend this dialogue, we commissioned three artists to create works in response to Shifting Terrain, inviting individuals who similarly open up new horizons in an ever-changing landscape for relating to, recording, challenging, and remembering the world. Moving across disparate forms, Hm Mirra, Cheryl E. Leonard, and Indira Allegra explore the ways place is experienced and represented. Describing her process, Leonard poetically writes of taking inspiration from the “endless monochrome” of Zacaba. Sharing kinship with Stuart’s embrace of adventure, she traveled late at night to Rodeo Beach, receiving and responding to the surrounding phenomena through a variety of methods in which the natural world and the world of human invention support and subvert each other. The result is Siren Songs, a recording of layered sounds and vibrations — the tune of shells, of falling sand, the pull of the tide — that allows us to experience both the vastness and variation of nature through sound.

Typed neatly on an index card in 377 characters including spaces, on the surface Mirra’s contribution describes a walk in northern California’s Marin County. The notations read like a collection of facts, of precise measurements: four hundred steps, in four hundred seconds, in forty breaths. The language, steps, breaths, time, materials are not isolated; rather they expand into a series of interconnecting networks. Through this extraordinary economy, the piece contains within it a range of measures, suggestions of what systems the body might contain within it, and the systems that it also inhabits. These understated transcriptions nevertheless make vivid the physical components of movement and life: the body, breath, time. Feet as Moving Collecting Parentheses, the work’s title, evokes the symmetry of the body, two feet side-by-side, moving across the ground, a pair of brackets. Each step in her walk references a dollar, as the artist translated her activity into the terms of the Open Space commission itself, a commission of $400 for four hundred words. The earth is one terrain, the systems in which we live another — something stanley brouwn knew all too well.

Like Leonard and Mirra’s contributions, the investigation of place is central to Allegra’s Watching You from a Moving Platform, a multi-disciplinary work evoking the disjuncture between the shifting impermanence of place and the clarity of memory. These ideas are brought home to us through dance and poetry, as Allegra carries and explores her ideas through her body and voice. Like Zarina, Allegra turns to the grid to gather and store her memories, using the frame of the camera and the seemingly blank space of SFMOMA’s White Box — a performance and event space — as the site and container for these considerations. Though the soaring white walls and expansive floor seek to affirm it as a neutral setting, Indira suggests it is a site for the investigation of whiteness itself, writing of it as “a construction, abstraction and curiosity.” The movement and the setting seem to be in a relationship of push and pull, oscillating positions of foreground and background, cleaving open the very idea of a disinterested site and infusing and challenging it with viscera, living presence, and memory.