Series Poet Be Like Kevin Killian
Poet Be Like Kevin Killian
Organized by The Editors
On June 15, 2019, the Bay Area suffered the tremendous loss of Kevin Killian, a renowned and deeply loved poet, playwright, novelist, critic, and teacher — among many other things. A central figure of the New Narrative literary movement and a longtime lynchpin of San Francisco arts and culture, Kevin inspired countless people near and far with his spirit, intellect, and generosity. Here, we gather remembrances and tributes in honor of this singular individual, and the legacy he leaves behind. 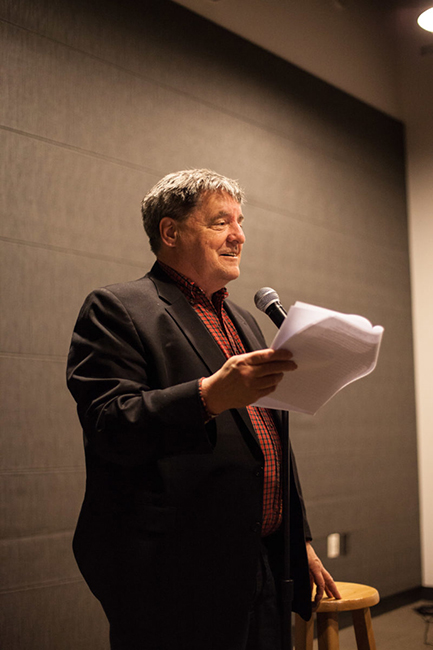 Kevin Killian performing at “A Funny Thing Happened on the Way to the Museum” in 2013. Photo: Keith Baker.

Like so many folks in the Bay Area and beyond, we were shocked and deeply saddened to learn of Kevin Killian’s passing on June 15. Our thoughts and love are with his many loved ones — and in particular with his wife and frequent collaborator, the writer Dodie Bellamy.

This loss came far too soon: but then, with someone like Kevin — is there anyone remotely like the magical Kevin Killian?! — it would always have been too soon. Along with our heartache, there is deep gratitude for his myriad and deep contributions to the arts, and to the Bay Area in particular. These contributions are too numerous to name; they seem to be everywhere on the internet, from places and people far and near. Doors opened, encouragements given, wit deployed, enthusiasms shared.

To these many notes of thanks, we add our own: Kevin was an incredible friend to Open Space, and to many of our colleagues at SFMOMA. His intelligence and generosity enriched so many of our endeavors. Nothing can replace his singular presence, but we are thankful to have his art.

Below, we’ve gathered just a few of Kevin’s museum interventions, linking to his words and videos of his work, which we have been poring over as we mourn this beautiful man. Any list would be too brief to do justice to the fullness of his art and life, but we humbly here offer some of our favorite Kevin Killian collaborations.

Kevin was the first columnist in residence at OS, his prolific output beginning in 2009, even before the announcement of his tenure could be officially made. His last work was this interview in December with JoAnn Low. (He also can be found here and there among Dodie’s rich and varied OS writings.)

He gifted the museum with a 2012 performance of Wet Paint, a play commissioned in 1996 by Bill Berkson. And he allowed us to offer the script here, for free.

That same year, he collaborated with artist D-L Avarez on another poets theater feast as part of the museum’s Stage Presence performance series: here’s a snippet of The Visitor Owl.

On the occasion of Mark di Suvero at Crissy Field, in 2013 he organized a chapbook of poetry with Frank Smigiel, then SFMOMA’s curator of public programs. The book was hand-produced by Andrew Kenower and Lara Durback.

In 2014, he was part of an evening of poets, performers, and comedians holding forth on humor and art. In addition to performing, he wrote this essay for Megan Brian, the night’s organizer.

And on and on it goes… we miss you, Kevin. And we thank you.