On the occasion of Mark di Suvero at Crissy Field, SFMOMA curator of public programs Frank Smigiel and poet and playwright Kevin Killian have co-organized a small chapbook of poetry, beautifully hand-produced by Andrew Kenower and Lara Durback. We’ll be posting selections from FIELD WORK on Open Space throughout the fall. Kevin Killian introduces the project here. 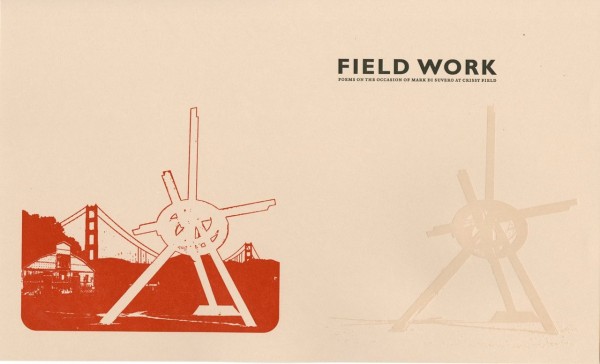 Once a tidal wetland, Crissy Field got its name from a flyer who crashed in a Denver airshow and became a hero. This Army airstrip, at first lined with grass, was paved with asphalt as whispers of a second world war swept through California in the mid 1930s. Ironically the erection of the Golden Gate Bridge spelled its doom as a top-echelon airbase just as it was getting going, and years of neglect and second guessing followed, but the base was used continuously for training and MedEvac operations right through the end of the Vietnam War. In 1994 Crissy Field was decommissioned, and the National Park Service took over, negotiating an uneasy blend of pre-Conquistador wetland with patriotic reminders of San Francisco’s extensive engagement with the military. No wonder the annual firework show on the Fourth of July is staged here, for while Crissy Field lives on, nationalism still seems gorgeous, even organic. As a child of seven, the sculptor Mark di Suvero passed these shores, under the bridge and along this field, when his family (Italian Jews living in the Shanghai ghetto, and recalled to Italy by Mussolini) decided to flee to America instead. Today, the San Francisco Museum of Modern Art is exhibiting eight of his celebrated large-scale sculptures on the wide verdant acres of the restored field. They can be seen from Alcatraz, from the traffic-filled rumble of Highway 1 snaking from Marin into the Marina, from the Red and White and Blue and Gold cruise lines that steam between bridges twenty times a day or more. And now we have invited the poets to come look at them, and this book records their inquiry.

Two years ago, in a similar initiative, four esteemed East Coast poets read their work before an array of di Suveros at Governors Island in New York — Yusef Komunyakaa, Brenda Shaughnessy, Tan Lin, and Paul Muldoon. The poets gathered on this occasion — most of us Bay Area-based, most of us scheduled to speak at a pair of public events celebrating the sculptor’s eightieth birthday — practice a spectrum of contemporary tendencies. A poetry fan himself, Mark di Suvero has enjoyed the pleasure of watching his work write itself, over decades, into the fabric of our deepest poetic concerns. In the tension between representation and abstraction; the tug of the political versus the personal; the nostalgia for a disappearing commons; the questions that haunt visual art and poetry both on gender, and on issues of nation and race, —in all these arenas and more, di Suvero’s monumental works have exerted a pull, even an atmosphere, without which our field of production would have been utterly, mysteriously different.

We’ll be posting selections from FIELD WORK on Open Space throughout the fall. Join some of the poets for a reading and book launch this Saturday, September 28, at Crissy Field, and in conversation with Mark di Suvero, on September 30.