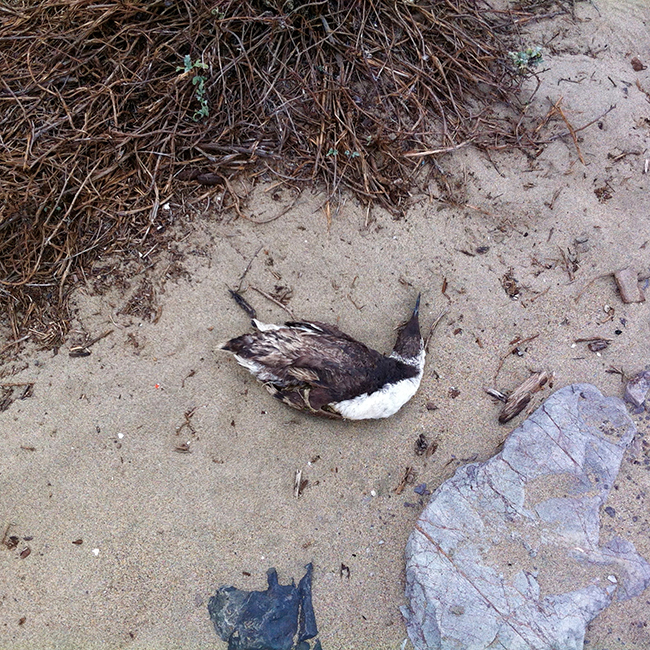 Middle Harbor Shoreline Park at the Port of Oakland, four years after cops raid Occupy Oakland. It’s overcast and about sixty-one degrees Fahrenheit and I am collecting trash. I find a Fritos bag, two plastic bags, a plastic jug that looks to have once been full of bleach, lighters, toothbrushes, tampons, a dead bird whose stomach is probably full of plastic fragments. I think about marching to shut down the Port, about dancing on top of semi-trailer trucks at sunset, about sharing snacks, about all the containers we passed walking to BART. I hang on to those photos like I have something to show for them. 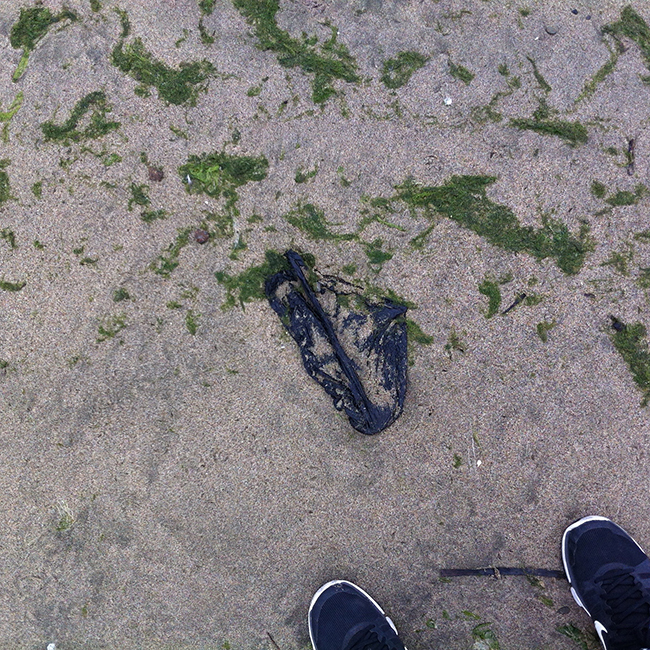 Roughly 90% of products traded throughout the world are transported on cargo ships in containers such as those we passed that night; only approximately 4% of this cargo is inspected, while the rest remains a transnational opacity maintained by logistics giants like Matson and Maersk. What goes into — and, in the event of severe weather, spills out of — these containers is typically known only to those who ship them.

Detritus that flies out of trucks headed to landfills, sloppy waste management infrastructure, poor and expensive recycling infrastructure, plastics interests that make stopping plastic pollution at the source close to impossible. In light of these systemic issues, pinning responsibility for mitigating plastic pollution on individuals is lazy at best and, given the pollution’s ecological and social consequences — violent, sexist, and racist at worst. 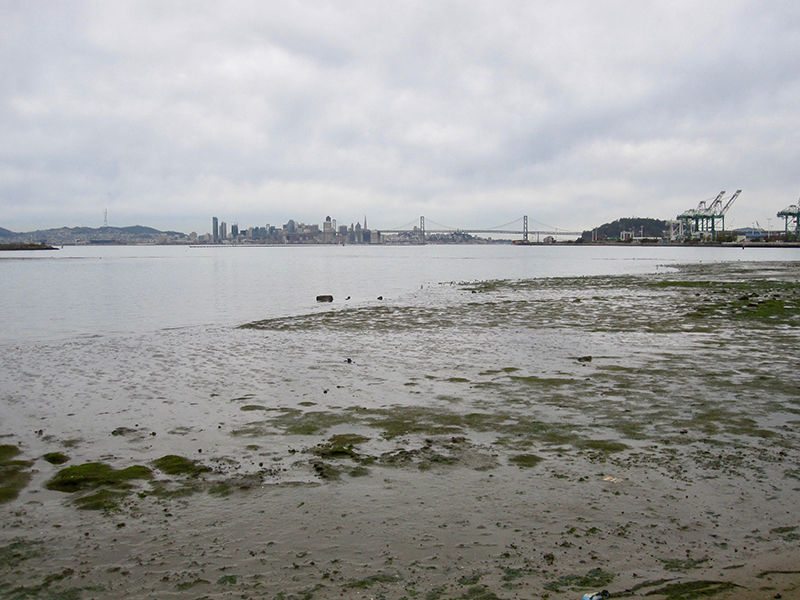 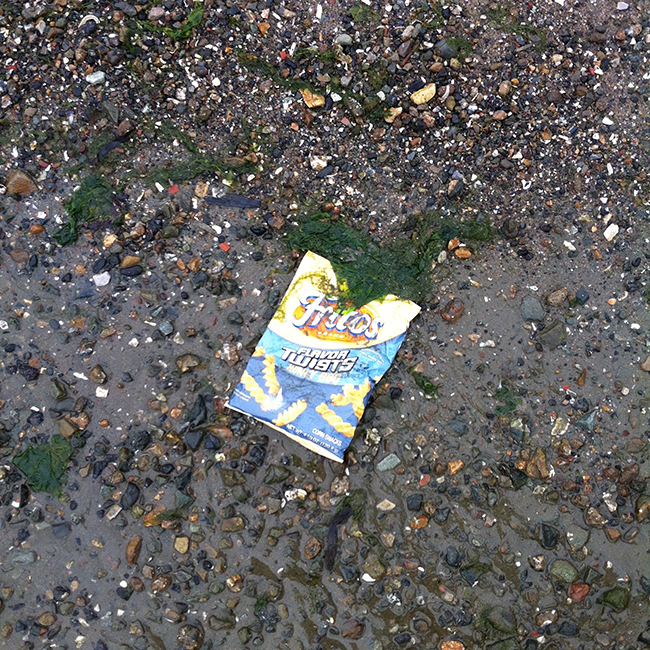 I go to Ocean Beach in the late evening when it’s already dark and the fog glows under the streetlights. As a teenager I went in the middle of the night for no particular reason, again and again. There’s been a storm and all sorts of trash has washed up. I collect as much as I can and take photos and think about the devastating effects of disposability culture. A coffee cup. A bedraggled travel toothbrush. A caulk can, a hanger, plastic fencing, chunks of Styrofoam, various microplastics. Something that looks like a crab pot. I get to know both trade and marine infrastructures with more clarity by getting familiar with disposable goods that persist, that don’t erode. But I still have a lot of questions. Like the time somebody asked me, “What is that yellow sea foam made of?” Despite having grown up in the ocean, surfing for most of my life, socializing primarily at the beach for roughly twenty years, and taking courses in marine biology, I couldn’t answer. 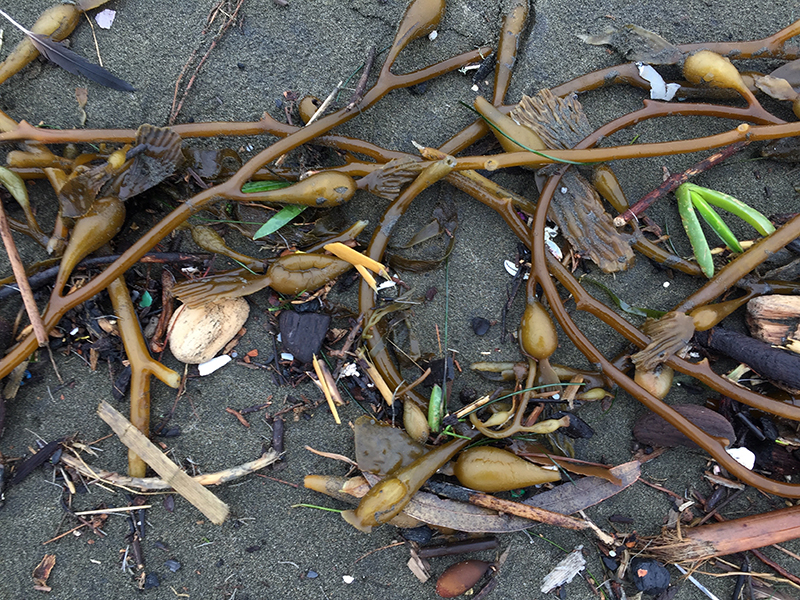 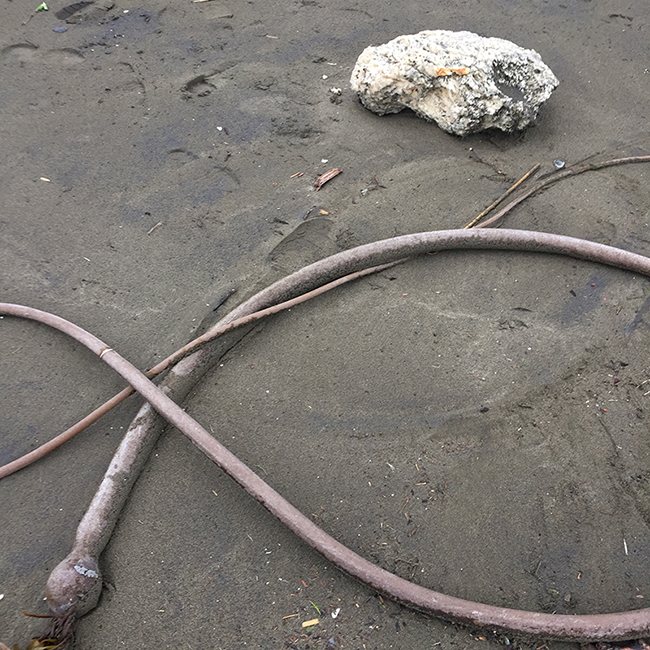 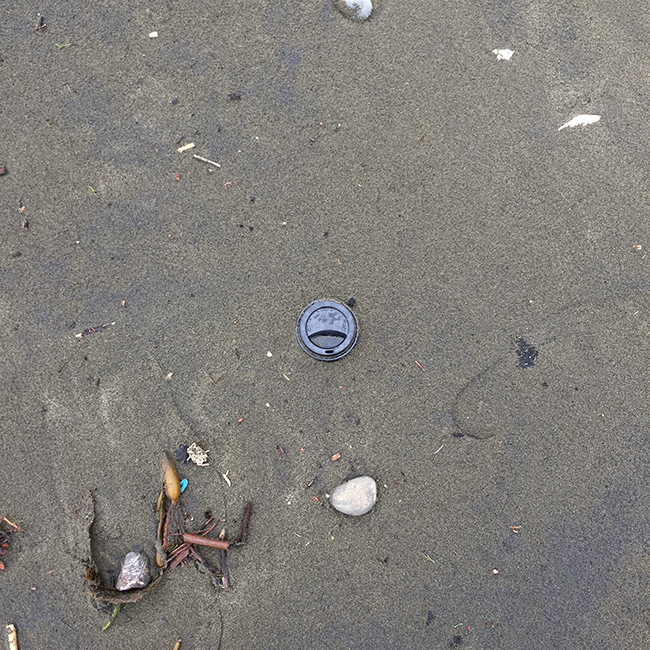 I text the plastic pollution activist friend who is coordinating an exhibit about the massive amount of marine debris on the beach and she asks me to bring her a buoy to add to her collection. I use the knife my stepdad gave me to free one from a tangle of kelp exponentially larger than a holdfast, to free the kelp from the synthetic buoy. 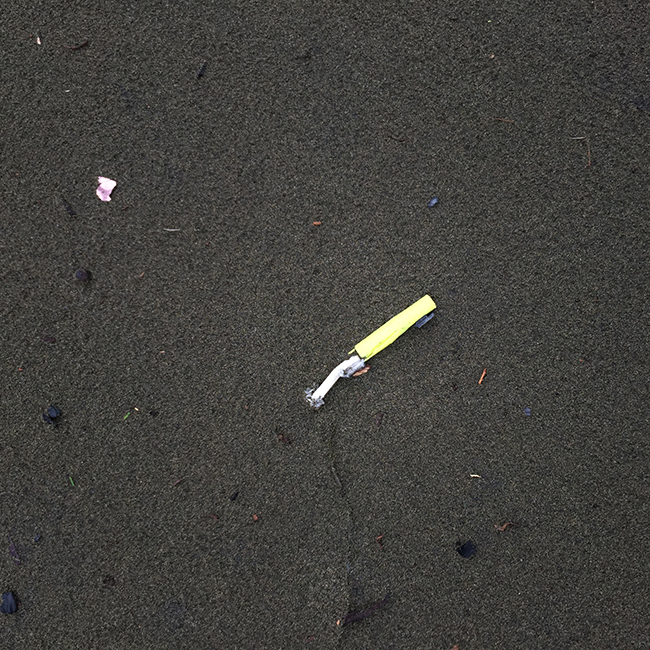 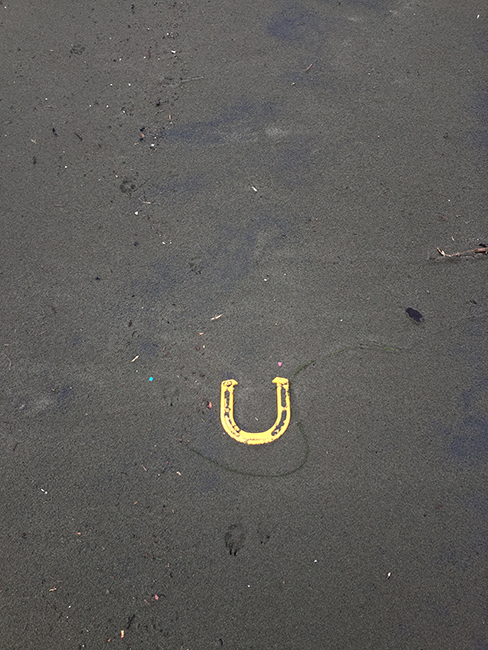 A Matson cargo ship is leaving the Port of Oakland en route to Seattle when it loses containers in high seas just beyond the Golden Gate of San Francisco. The port ships some 2.3 million containers annually and is a major hub of world trade. El Niño weather patterns bring exceptionally severe and frequent storms, and goods must be secured tightly and in proper sequence in order to prevent containers going overboard. Evidently, time was more of the essence than security, and at least ten shipping containers fell into the sea. Plastics, metals, wood, and glass began washing up on Baker Beach in San Francisco on Saturday, December 12, 2015.

By the time I get there Tuesday morning, when debris from a second container is washing up in Pacifica, most of the debris at Baker Beach has already been cleaned up by employees and volunteers. I run into my friend Sam, who I met at his skate shop in Oakland in 2011. Back then, he was running the shop out of Hoopers on Telegraph; now he sails around the world as an able seaman with Matson, which has contracted crews to clean up bakery pallets, metal fragments, and glass shards with rakes, gloves, and trash bags. On the stretches of beach where the crews have yet to finish, pebbles and blobs of Styrofoam stick on the shoreline. I join them. 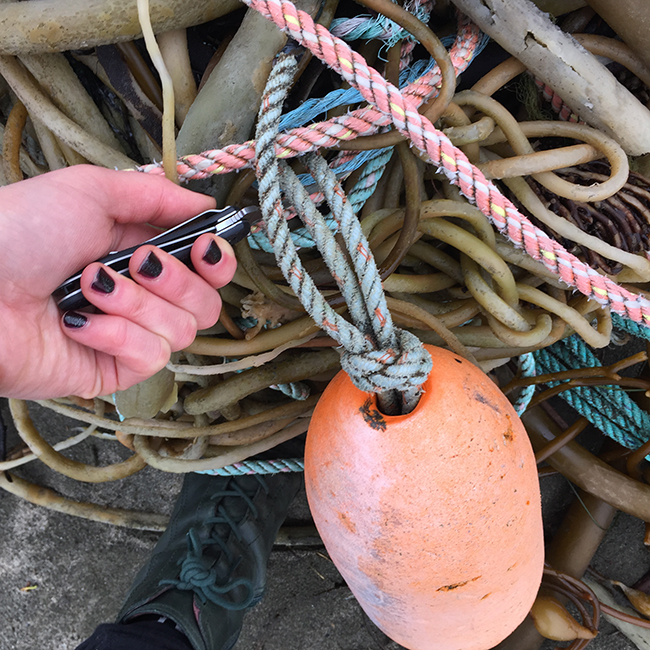 Some of the people cleaning up say that the foam is housing insulation. We shroud our bodies in plastics that off-gas and, when confronted with water, leach toxic endocrine disrupters that disproportionately affect bodies sexed female at birth, causing cancers and endocrine disorders. Production is outsourced to the Global South, where a lack of waste infrastructure and the aggression of colonizing capitalist interests devastate Black and brown bodies. Even in the sanctimonious bubble of the Bay Area, we can’t extricate ourselves from this web.

Hanjin goes bankrupt and 25% of the world’s cargo ships sit empty, floating — crew included, stranded from their families. Many of the ships can’t enter any country. 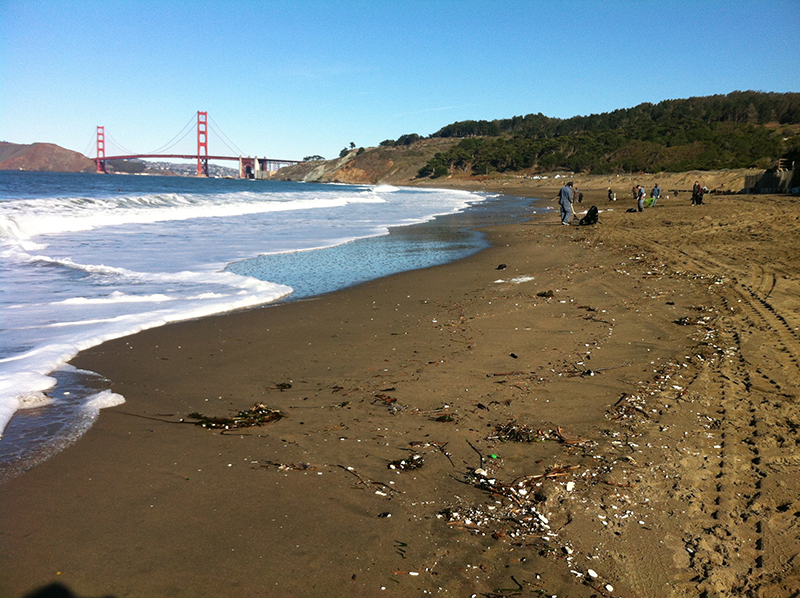 Years later, I wake as if still on the coast. What do I know? I drag my toes across the small swath of linoleum, in sync with the morning’s broadcast. My body feels out of place here in the Central Valley; I go home every chance I get. To Oakland, to San Francisco, to Bodega Bay, to Mendocino, to San Luis Obispo County, to Ventura, to Los Angeles. I put on a swimsuit to write a paper. I carry my body to the commuter pool at the University of California and make my moves. I step extra wide through a sprinkler. I read an article about a person breaking a world record for surfing the biggest wave a human has ever been known to surf. The only thing I really want for myself in 2018 is to learn to ride big waves.

According to the International Council on Clean Transportation (Netherlands Environmental Assessment Agency), in 2015 international shipping produced more carbon dioxide emissions than the entire country of Germany. Sea level rise is likely to flood the undersea fiber-optic cable infrastructure that is crucial to contemporary global communication and trade, as the housing for the cables is situated in low-lying areas. Marine plastics hardly stay put in the Bay. They’re in the sediment and the currents and the fish, too.