Little House on the Rails 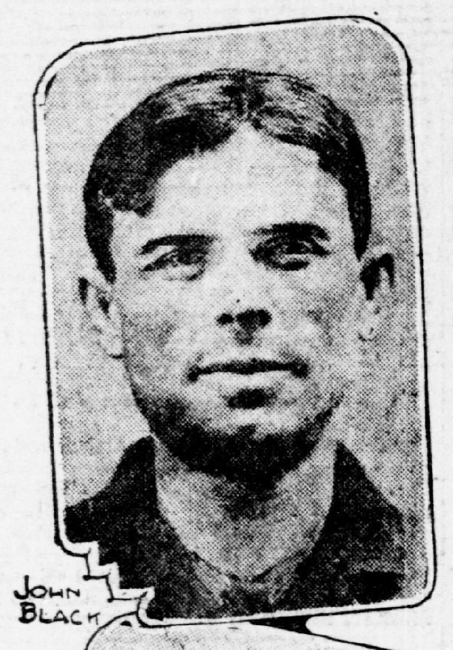 Jack Black’s mugshot from the January 5, 1912 edition of the San Francisco Call.

Many years before you could reliably use the internet to search for rare books, and before anyone had ever heard of a comic actor named Jack Black, I spent untold hours combing bookstore shelves hoping to find a first edition of You Can’t Win, a memoir written in 1926 by an earlier, more nefarious Jack Black. This Jack was a house burglar, opium addict, drifter, grifter, boxcar tramp, professional prison escapee, and uncommonly talented prose stylist whose real name might have been Thomas Callaghan, but who went by Jack (or John) Black because it gave him the nominal near-anonymity his illicit life required. I found out about the book through a mention somewhere of William S. Burroughs’s love for it as a boy in St. Louis. He called it the “good red book” (the boards are flame red) and he later used it as the urtext for his first novel Junkie, which is peopled with addicts and wastrels united by a code of outlaw honor much like the one Black describes in the fin de siècle West. (Dylan seemed to pick up the signal of this ethic in “Absolutely Sweet Marie”: “…to live outside the law you must be honest.”)

I would love to call You Can’t Win a lost classic of American literature, but that’s not exactly right. For one thing, it’s been found again and again over the last fifty years by dissident readerships that have claimed it as their own: Beats, hippies, off-the-gridders, libertarians, punks, psychedelics, disaffected writers. For another, the book is uneven in quality from beginning to end. But at its best, it’s as powerful as Ralph Ellison or Raymond Carver or Lucia Berlin on the emptiness at the heart of what is supposed to be American abundance. Carl Sandburg, who praised it — as did John Dewey and Lincoln Steffens — wrote: “Much of this book is about loneliness.”

It’s also, to my mind, the most fine-grained eyewitness account we have of what the country felt like as the frontier and the Old West slowly gave way to a modernizing, urbanizing America. Raised in Missouri, Black spent much of his criminal life in stretches of the remote West closer in development to the Civil War than to the twentieth century — Pocatello, Idaho; Dodge City, Kansas; Great Falls, Montana; Cheyenne, Wyoming. Native American tribes had only recently been forced from their lands and the open range closed, parceled out to farms and towns, when he began drifting through these states, burglarizing, fencing goods, and feeding his drug habit in the back rooms of Chinese laundries, a proto-Modernist anti-cowboy. He spent the last half of his life in San Francisco, where the crusading newspaper editor Fremont Older befriended him and helped get him a truncated sentence during his final prison stint, in San Quentin. Black thanked him, among other benefactors, in a compact masterpiece of comic lyricism: “This book is dedicated to Fremont Older, to Judge Frank H. Dunne, to the unnamed friend who sawed me out of the San Francisco jail and to that dirty, drunken, disreputable, crippled beggar, “Sticks” Sullivan, who picked the buckshot out of my back — under the bridge — at Baraboo, Wisconsin.” 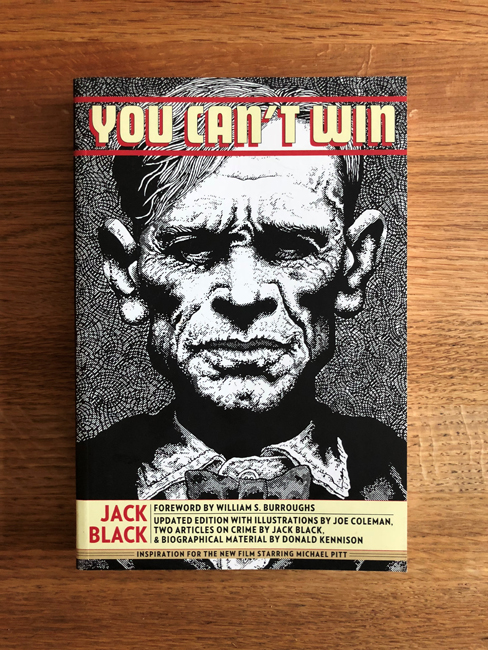 The most recent reprint of You Can’t Win (Feral House, 2013). Courtesy of the author.

Black’s West presages the one to come, of cheap motels, desolate highways and disconnected people. In a remarkable passage, he describes a wordless late-night encounter between himself and a fellow lodger in a small boarding house in some anonymous Western town, switching to the second person to implicate the reader in what occurs, a piece of performance art related with Beckett’s savage wit:

You wonder who will occupy the transient room directly across the light well. The window is open and the curtain is up. A fat man with a pink complexion and gray hair is standing in the middle of the room […] You decide he is about half drunk. He takes his hat off and throws it out of your line of vision, probably at the dresser. Now he turns around, goes to the door, and kicks it shut with a bang. Back in the middle of the room he puts a fat hand in his capacious pants pocket and comes up with a small roll of paper money. He unrolls the bills, looking at them with a mysterious smile on his fat face […] The fat man now gets a chair and places it directly in front of this window, but instead of sitting down he stands up on it unsteadily. You get alarmed and watch him intently. Surely he’s not going to jump out? No, he takes the string and pulls the curtain halfway down […] The upper part of him is silhouetted against the curtain. He raises one hand above his head, the hand that holds the bills. You can see his blurred shadow as he runs it along the roller at the top of the curtain […] You sit in your room not fifteen feet away, open-mouthed in amazed admiration. What a fox he is, to roll his money up in the curtain! […] Then he goes over to the door, turns the key, and snaps the light out. In fifteen minutes you can hear him breathing like a blacksmith’s bellows.

Later that night, of course, Black breaks into his room and relieves the sleeping man of the lump in his roller shade, along with his pocket watch and silver coins, as if fate had determined that the two could come to know each other only this way, as surveiller and surveilled, malefactor and victim. 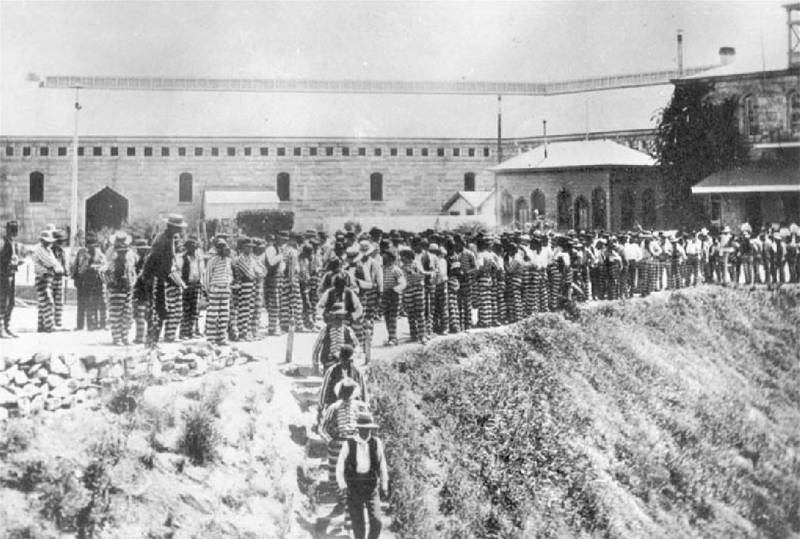 When Black first began trying to relate his life in print, Older paired him with a seasoned professional writer who had her own hardscrabble roots in the West, and who would later come to help shape one of its defining narratives: Rose Wilder Lane, the daughter of Laura Ingalls Wilder, author of the Little House series, which chronicled pioneer life in Wisconsin, Kansas, Minnesota, and the Dakotas. A hard-charging, romanticizing ghostwriter, Lane collaborated with Black on two newspaper prison-saga serials, “The Big Break at Folsom” and “Out of Prison,” both published in 1917, almost a decade before his full-blown memoir. Not much is known about Lane’s influence on the writing of You Can’t Win, though her correspondence with her mother has shown her deep involvement in some of the Little House books. I like to think of Lane nonetheless as a secret conduit between the Old West of her mother’s family and the New West that Black helped conjure, along roads Jack Kerouac and Neal Cassady would later drive. When my daughter was younger, I read her parts of the Little House books and couldn’t help but hear echoes of Black, especially in the more desperate scenes, when the Ingalls family is imprisoned in its home during the notorious Dakota blizzards of 1880-1881, hand-grinding wheat for flour in a tiny coffee mill, making barely enough each day to survive. When I would get really sleepy after reading for a time, the flour would become opium, supplied by little Laura to Black through tunnels beneath the snow, keeping both him and the Ingalls alive on some vague, louche rolling prairie outside time. 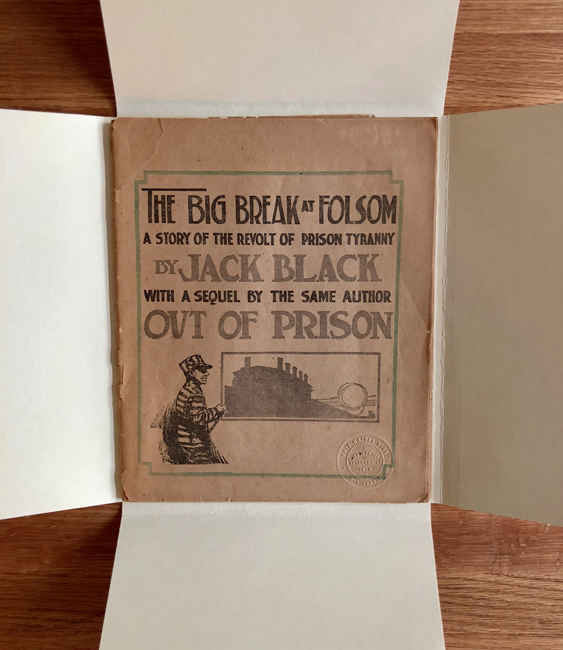 Jack Black’s The Big Break at Folsom, ca. 1917. Courtesy of the author.

After the success of You Can’t Win, Black became a sought-after lecturer and tried his hand, unsuccessfully, at playwriting. During his criminal days, he had avoided New York City as a place surpassing his talents, but in the late 1920s he moved there, and thrived for a while, even landing a piece for Harper’s Magazine. In the winter of 1929, he wrote proudly to Older about the assignment, saying he had “pulled off a job here — a literary job,” a witty turn of phrase made poignant because Black seemed never to think of writing as just another con, but as an almost holy calling.

It is an achievement entirely in keeping with his life that Black managed his final escape without letting anyone know how or when. He simply disappeared in New York and was never heard from again, around 1932. Older’s wife, Cora, who admired Black, later wrote that her husband believed “Jack did what he always said any down-and-outer should do, ‘fill his pockets with rocks and take a header into the bay.’” Occasionally when I’m on the subway crossing the Manhattan Bridge, I look at New York Harbor and think of Black out there late at night in a little rowboat, wearing his last good suit and taking himself far enough from shore to guarantee no possibility of return. At home, I have a nice first edition of his good book, protected from time and the elements, appropriately, in a sturdy black case. 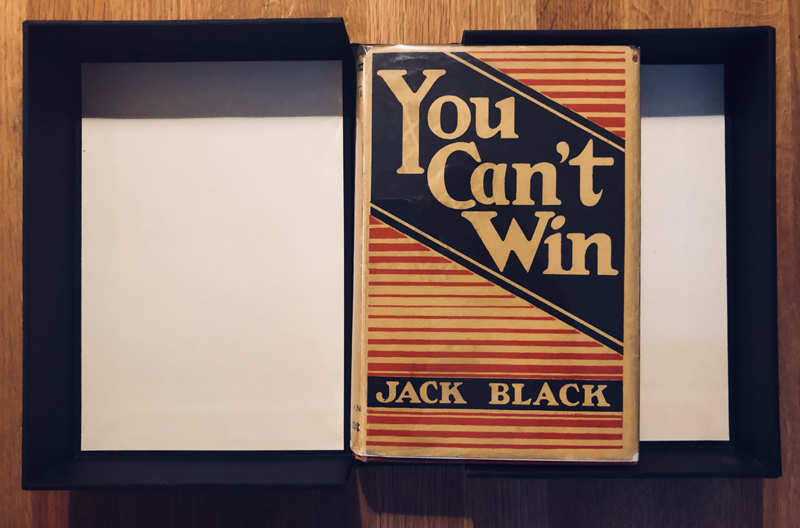 The first edition of Jack Black’s You Can’t Win, 1926. Courtesy of the author.