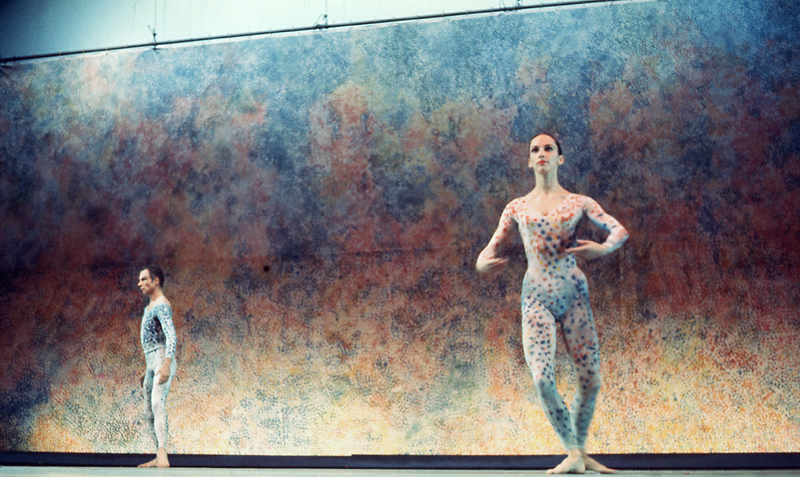 On a Thursday in the winter of 2010, I left my job in midtown early, took the 1 train down to 14th Street, and walked west to the Merce Cunningham Studio, arriving just in time for the 6 p.m. beginner-level class. “The only way to do it is to do it,” Cunningham said, and the only way to learn the Cunningham technique, which I’d been wanting to do for a while, was to start taking class.

The teacher that night was a nice, straightforward guy named Robert Swinston, who, to my relief, asked if anyone was brand-new, and reviewed the basics on my behalf. I began to learn the foundations of the warm-up: the bounces; the exercises on six; the curving, tilting, arching, twisting of the spine, as the legs lunged, brushed, circled or kicked. I liked the directness of the technique, the decisiveness, and how simple parts built into convoluted riddles, to be unlocked through repetition. 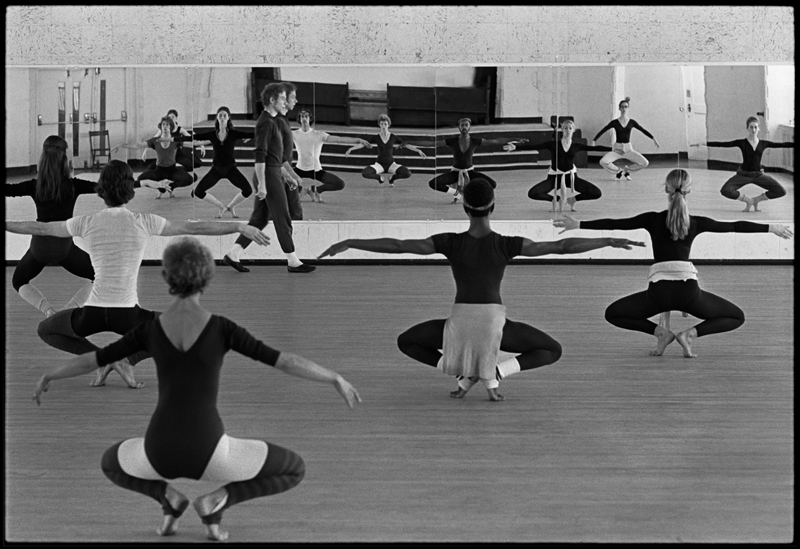 It occurs to me now that the studio was still in mourning. Cunningham, whose company and school had lived there, on the 11th floor of Westbeth, since 1971, had died only seven months before. The company had just begun its two-year Legacy Tour, after which it would disband. And while I knew this then, I don’t remember dwelling on it that night or any night over the next two years, when struggling through class became a routine joy. I wasn’t particularly good, but after sixteen years of training in other dance forms, the technique made me stronger than I’d ever been, and more adventurous. In the midst of so many endings (the school would close shortly after the company), I had stumbled into a fresh start, a new way of thinking for my muscles and bones.

On the morning of Monday, March 20, 2017, I wake up to an email with the subject line “death of Trisha Brown.” Generally I’m unmoved by the deaths of famous people I didn’t know, but this is different. Because I did know Trisha Brown, or felt I did, in that I knew and treasured — know and treasure — her dances, and the dancing of so many people she inspired, and the ideas she unleashed around our very definitions of dance. Is it a man walking down the side of a building? A telegraphing of movement across an archipelago of SoHo rooftops? An accumulation of gestures? Yes, she said, all of it.

I think about her unfettered imagination, the permission she gave herself and others, her fearlessness. I learn that her New York Times obituary has been bumped from page A-1 by the obituary of David Rockefeller, the head of Chase Manhattan bank. My reflexes land me at that manic, inescapable site of mourning, Facebook, where cries of Trisha! Trisha! rain down across my newsfeed. The choreographer Sarah A.O. Rosner, who once introduced herself to me as an anti-ephemeralist, a term I’ll never forget, has written:

How odd it is to feel someone resonating in your body after they’re gone, especially not having know[n] them personally, or felt like you had studied them with particular focus. But there she is! So clearly in this moment . . . lighting up the lineage of how she got here inside my body. . . . Embodiment is such deep intimacy!

Embodiment is such deep intimacy. And it’s a way in which dance doesn’t go away.

People worried that Cunningham’s dances would disappear when he died, but in three weeks and two cities this spring, I saw his work performed by the Lyon Opera Ballet at New York City Center, by Compagnie CNDC-Angers at the Joyce Theater (under the direction of Robert Swinston, who, I would learn after taking his class, had been Cunningham’s assistant from 1992 until his death), and by four dancers from the final incarnation of the Cunningham company, appearing as part of the Walker Art Center’s vast, magnanimous exhibition, Merce Cunningham: Common Time.

To my eyes, which first saw a Cunningham dance in 2004, his work looks very much alive. Not surprisingly, it was most vivid when viewed up close, with live improvised music, in a gallery at the Walker. Andrea Weber, a fifth member of the final company, had assembled a series of Events — excerpts of Cunningham’s repertory stitched into thirty-minute collages — amid the labyrinthine show of videos, costumes, photos, music, backdrops, sets, and other artworks affiliated with his oeuvre. 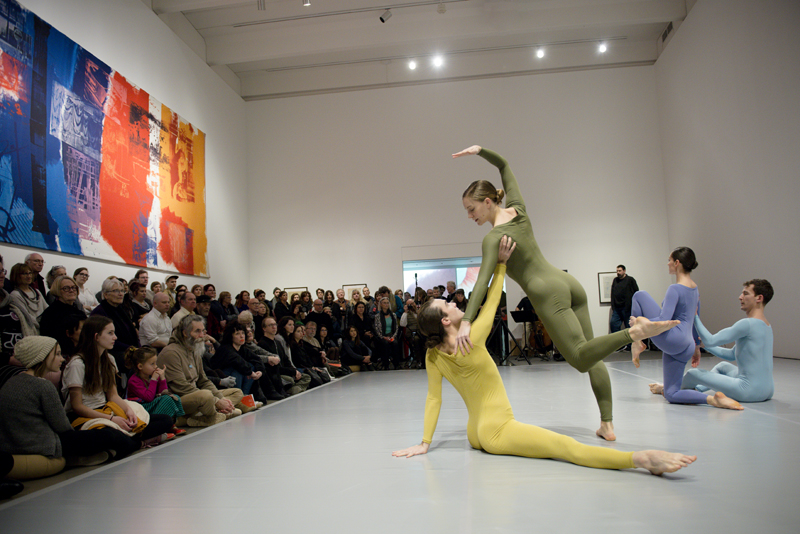 It’s hard to overstate the brilliance of the dancers — Dylan Crossman, Silas Riener, Jamie Scott, Melissa Toogood — who catapult Cunningham’s spirit into the present more than any tangible artifact possibly can. Their movement lives on a precipice, reads like a succession of narrow escapes: almost collapsing, almost colliding. Yet it springs from an unshakeable foundation, from knowing the rules deeply enough to transcend them. I keep recalling a duet between Crossman and Scott: In the seconds between her standing upright and falling, he finds time to leave her and leap around the stage, coming full circle just when she needs to be caught.

If there’s anything missing from the trove that is Common Time, it’s sustained attention to the dancers themselves, to those who did (and continue to do) the intimate work of embodying: people like Carolyn Brown, who worked so closely with Cunningham, and wrote a celebrated book about her two decades with the company. She appears in multiple archival videos in the exhibition, yet her contributions to his career remain otherwise unexplored. 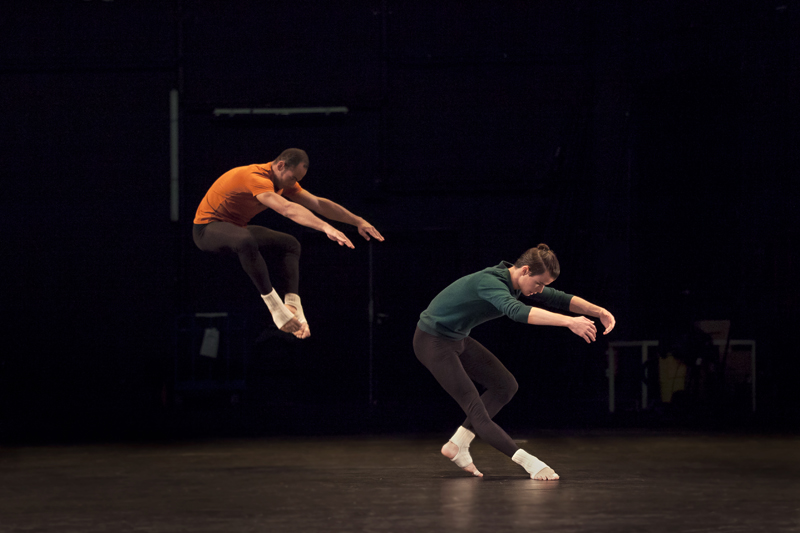 The creators are the focus here — Cunningham and his collaborators, like Robert Rauschenberg, Jasper Johns and, of course, John Cage — while the dancers through the decades, all 163 of them, are recognized collectively in fine print, their names listed on a single plaque at the exhibition’s entrance. (The creators, as it happens, are predominantly male, the dancers mostly female.)

In 1976, the dance writer, choreographer, and former Trisha Brown dancer Wendy Perron wrote in the journal Eddy: About Dance, “Is it possible that that old preconception of a dancer being a mere instrument of the creator is still around?” Forty-one years later, it appears that yes, it is. I called Wendy (who is also a friend and former boss of mine) to ask if she could describe what Carolyn Brown brought to Cunningham’s dances. “An ongoingness,” she said, “the idea that this dance just keeps going and going, and I, Carolyn, still have this floating tranquility above the whole thing.”

I’m not suggesting that Cunningham’s dancers were co-choreographers, that they generated steps and structures in the way some dancer-collaborators do. But their dedication and expertise, their qualities as people and performers, allowed — and allow — the work to unfold as it did — and does. There’s no dancing without dancers. It’s dancers who keep dancing alive.