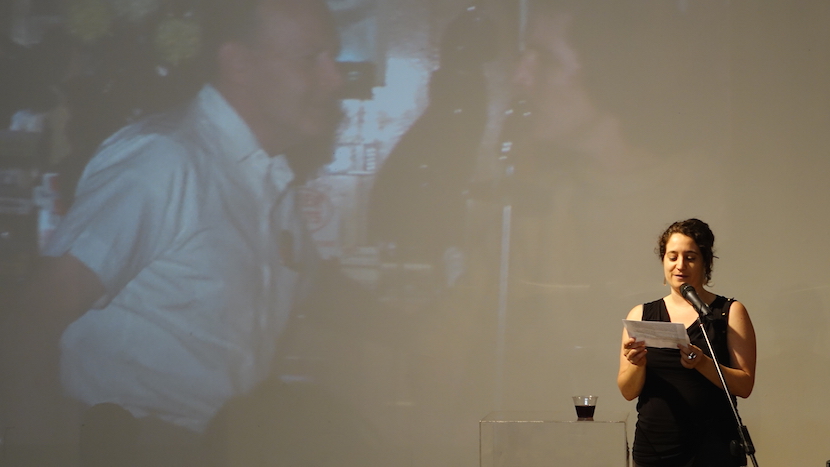 Open Space Editor-In-Chief Claudia La Rocco delivers some remarks at The Lab; behind her is Rick Prelinger’s film All-Is-Well. Photo: The Lab.

So, last night, Open Space threw a little summer party at The Lab. It was an occasion to gather with friends and collaborators, to celebrate our first year post-relaunch, and especially to pay tribute to our contributors. A time to make merry.

These were the thoughts cycling through my head in the days and hours leading up to the event. The power of art to do what? Celebrate what? The world feels so dark.

That’s what I was thinking while Tongo Eisen-Martin read his unsparing, beautiful words, which we were honored to publish when he was columnist-in-residence this winter. And when people took a few or many moments to sit quietly in a room full of loud voices, writing notes to women who are serving life without parole, adding their voices to A Living Chance, OS Featured Contributor Adrienne Skye Roberts’ ongoing storytelling project to draw attention to these incarcerations. And when, throughout the evening, I would look up from whatever conversation I was having to catch a glimpse of Rick Prelinger’s film All-Is-Well, the opening piece of our third issue, its prosaic images of Americans enjoying quiet leisure time reminding me that the everyday isn’t only filled with pain and struggle, as it so often seems these days.

For those who couldn’t make it out, and would like a bit more context, my introductory note is below. And for those who did come out last night, who spent some time, who support artists and art and activism: thank you for reminding me of the good, important things happening all around us, all the time. I needed it. 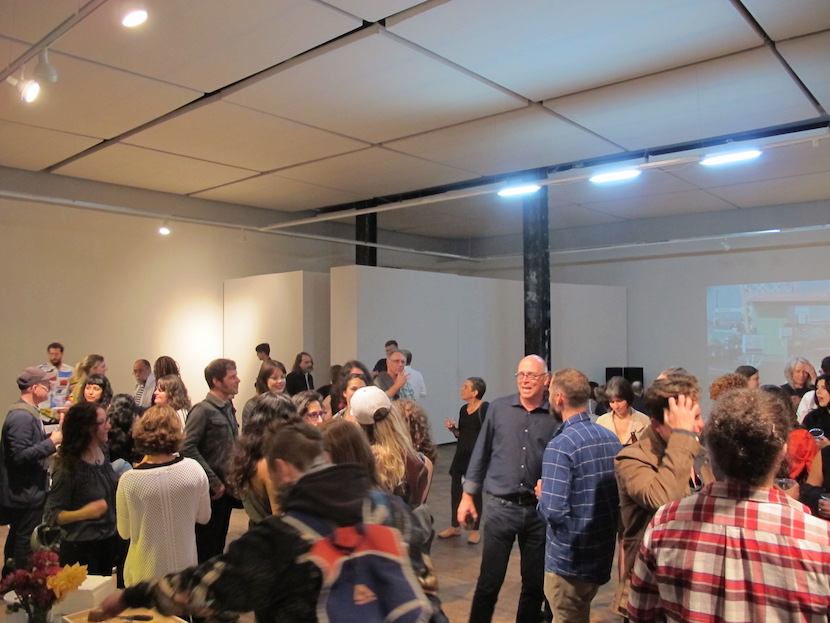 Thanks so much for coming out tonight.

The idea for this party was sparked by the film you see playing. It was made by the archivist, writer, lecturer and filmmaker Rick Prelinger, who many of you know. Rick is currently out of town on a residency — he sends his hellos from afar, and regrets that he can’t be here.

One of the first places I visited as editor in chief of Open Space was the magical Prelinger Archives, a space dedicated to the belief that information should be free, and easily accessed by the public — a mandate that seems ever more urgent these days. We asked Rick to create something involving archival footage for our current issue, and this film, called All-Is-Well, is what he came up with. I’ll read the brief description that runs online with it:

“All-Is-Well collects ordinary adventures remembered only because they survive in home movies. Against a backdrop of distant news events, kids stampede for Easter eggs; horses run together; families read pulps and shoot craps; cooks fry; tin-can tourists work hard at leisure; people pose, clown and drink, pull back the husks of sweet corn. For them and for us, remaking the ephemeral gesture is both a small pleasure and an act of survival. The home movie segments used in the film date from 1930 to 1969, the period in which the near-infinite and mostly-unseen archive of home movies that awaits our attention was born.

Consider watching it a second time with sound turned down and a room filled with people talking.”

It was that final sentence that gave me the idea for a summer party: a room filled with people talking. We wanted to gather to celebrate Open Space’s first year since the relaunch — a reimagining that was dreamed up and overseen by Open Space’s marvelous founding editor, Suzanne Stein, who is here tonight. As I think most of you know, Suzanne handed over the reins to me in February, in order to embark on new adventures…

As I’ve undertaken the daily adventure that is Open Space, I’ve become increasingly grateful for my in-house collaborators who, in various ways, make everything go, and go better. I would like to especially thank Bosco, Chad, Gordon, Grace, Jay, Maggie, and Zach.

And I want to thank you all, for making the beautiful things that you make. If I were to list all the amazing work that Open Space has published in this last year, well…we would run out of booze before I finished. So I will just mention a few of the works on our home page right now: for our latest Project Space, we have LACE, an array of graphic scores for improvisers by Zeena Parkins. Our three columnists in residence, Bruce Hainley, Kristina Lee Podesva and marcella faustini, have given us a proliferation of interviews, poems, essays, and remembrances, with a few more to come. Our third issue, titled A Slight Fluttering of Panic, Maroon, Cerise, The Seriousness of Leisure, will conclude next week. And we have a beautiful essay by the great Bill Berkson, who is dearly missed.

Thank you all… I’m excited to see what you’ll come up with for year two.

Once we dreamed up this party, we decided to invite two more Open Space contributors, so we’d have one from each of the first three seasons. We didn’t set out with particular parameters — but I’m struck by how, in distinct ways, they are all deeply rooted in place, and engaged in working for progress. It’s been a comfort and an inspiration to me to look at the ways in which they dedicate their voices to justice, especially after the horrible violence we’ve seen over the past two weeks.

Naturally, they’re busy people. Adrienne Skye Roberts, who was a featured contributor in the fall, is also away, as her work with A Living Chance has called her down to Los Angeles. We’re grateful to have her present through her art — and through Gabrielle Reed, a volunteer with A Living Chance who has been working with Adrienne on this project with people serving life without parole. Gabrielle is going to say a few more words about this endeavor:

And now it’s my great pleasure to introduce Tongo Eisen-Martin, who was one of our columnists-in-residence this winter. A San Francisco native, Tongo is a movement worker and educator who has organized against mass incarceration and extra-judicial killing of Black people throughout the United States. He has taught in detention centers from New York’s Rikers Island to California county jails.

Tongo has designed curricula for oppressed people’s education projects from San Francisco to South Africa. His latest curriculum on extrajudicial killing of Black people, We Charge Genocide Again, has been used as an educational and organizing tool throughout the country. He is also a revolutionary poet who uses his craft to create liberated territory wherever he performs and teaches.

At once bracing and elusive, Tongo’s poetry is a movement work all on its own. I’m delighted he’s agreed to read some of it tonight.