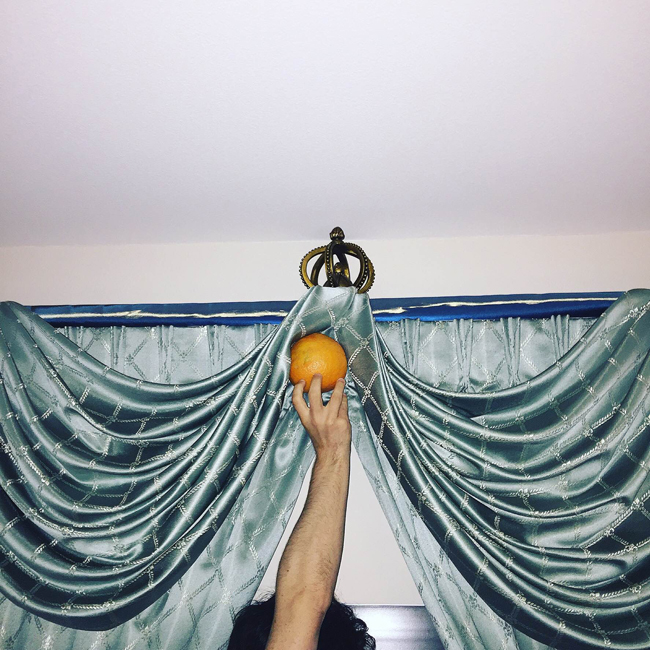 To reach God she opened her grapefruit. It was one of a few entrances, the rest weren’t as easy. Which made her think of her father. He made her after all.

Many times she opened it alone or with others. And with others it wasn’t as often because there always had to be a reason, a plan, a schedule.

To reach her mother, she opened her grapefruit the same, but for a different reason, at a different angle.

She was too lazy, apathetic, and restless to secure a place on a spectrum, to open other grapefruits, for it would take too much effort. Her aunt died of schizophrenia in Manila.

And she didn’t like the smell. Her nose and fear of God left her with a man, one born without a grapefruit and who wasn’t at all resentful of not having one.

This man may have wanted other ones, but not on a woman or a man with or without grapefruits, or an animal, or something like a bodiless non-grapefruit, not one made of marble or with a battery.

It became unclear to both of them what kind they both wanted.

It would remain this way like a question mark without a period, just a question without having asked it, although both of them asked quietly and separately in their dreams.

To reach God she opened her grapefruit to receive. It went on like this for centuries.

To survive, she was basically numb to God, although she prayed prayerless prayers.

One thing that freaked her out was the thought of another grapefruit growing inside her. This to her was more interesting than God which is also why it was terrifying.

And one way for a grapefruit to grow inside her, the worst thing would first have to enter her.

Lying on the inflatable bed, these thoughts stretched like blurry pixels of grapefruit art. She was just scrolling through random accounts, passively searching.

Passively searching for something random like God or summer, remembering what life was like when things weren’t so random, before the sky began to turn pink in the evening, getting the screen all sticky and sweet.

Cousins reminded her of the sun and leisure, never work.

While searching for what is always the wrong thing, she found her cousin, and then found more of them.

Some of their grapefruits looked well off, and the other cousins who didn’t even have grapefruits she assumed were depressed, broke, or dead which was why she couldn’t find them on Instagram.

This made Pauline laugh so hard out of anger.

Pauline laughed so hard that she drowned, bits of fleshy grapefruit bobbing around on the surface of the bright green pool.

Eds. Note: We asked Feliz to respond to three earlier works in this issue: “All-Is-Well,” “Espuma y Mucho Mas,” and “Rose Arrest.” This is the result.