A few times a season, we like to reach out to a current or former Open Space contributor and find out what they’ve been up to. Poet and teacher Cedar Sigo is a columnist, and published work here between 2009 and 2012. 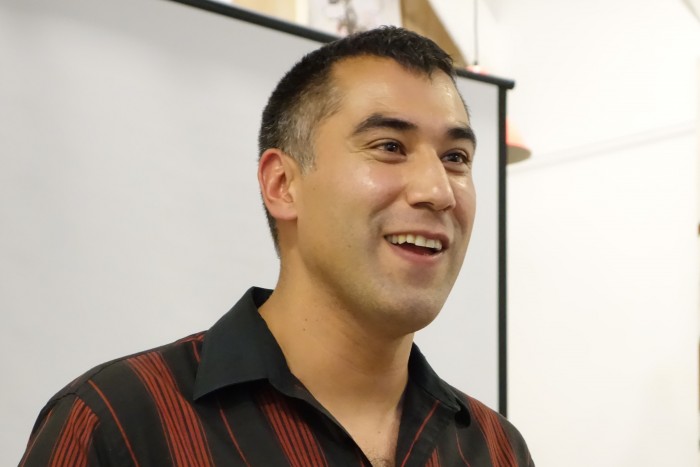 So, Cedar, what have you been up to lately?

This year I have been travelling, once a month it seems, for readings, lectures, and residencies. I just finished up a two-week residency for The Shandaken Project, which was hosted by Storm King Art Center in upstate NY. It was incredible to have this huge sculpture park right near my studio to wander around in. It was the perfect release from the more cerebral aspects of writing poetry.

It was my first residency ever, so I was a little apprehensive going in, but the other artists who overlapped with me were so relaxed and charming, and in most cases it was their first residency too, so everyone was intensely considerate. Earlier in the year I taught my first semester-long workshop at St. Mary’s College in Orinda. It was great to finally have to take responsibility for what I know about the line, to have to assemble the writings of others (mostly poets) into a cosmology in order to share them with others. We did a lot of reading aloud of other poets in class. So often, I feel poets are taught how to write their own perfect, dead on arrival, airless verse, and then are asked to share it aloud and that’s that. I always want to be ripped out of whichever measure my voice comes to rest in. I get so sick of my own voice. I want to hear my favorite poets being read aloud in a variety of voices. There were 12 students in my class and so we got to hear several takes on the same voice and how different bodies negotiate the simultaneity enacted in the work of Barbara Guest, Alfred Starr Hamilton, and Joanne Kyger. My students were totally game for this approach and we had fun.

This year seems to be about finally exploring the various kinds of work that are available to artists to keep them afloat. I had always thought I required a shaded kind of privacy in order to do my work, but these forms of professionalism seem just as available now as those I call upon to suit my poetry. I guess I feel like my life and my work are finally catching up to each other. I think the poet John Wieners covers this sensation best in the last stanza of his 1969 poem Supplication,

“Return me to the men who teach
and above all, cure the
hurts of wanting the impossible
through this suspended vacuum.”

Has anything (artist, artwork, event) in the Bay Area been particularly inspiring to you recently?

Yes: two shows I saw recently in the Dogpatch. First, Gwenael Rattke’s Not Fun And Not Free at Romer Young. The show featured collages that seemed to begin at the dashboard of an old (1970s?) spaceship, but with a screen view or window out onto pure interplanetary space. Before viewing his works, I had never felt that my full body was allowed inside a collage and then encouraged to swim around. Well, one possible exception does come to mind: Superhuman Devotion by Bruce Conner. Gwenael’s work didn’t seem to be bound by the wall, glue, or anyone’s expectation. Collage should constantly morph in spite of its being trapped on a surface. Usually one has to go toward film in order to achieve this sort of immersion. I had taken notice of Gwenael’s amazing interiors for the new Cookie Mueller biography, Edgewise, by Chloe Griffin. He updates the gorgeous layouts of After Dark, Good Gay Poets, Straight to Hell and a host of other hot queer publications of the ’70s and ’80s. His layouts feel integral to the content, and not merely decorative; nothing is crowded in.

The second was a show of typewriter works by Ajit Chuhan at Minnesota Street Projects. I used a typewriter for several years because it felt most honest in terms of poetry being a scored medium, and it allowed for an actual depth of impression when reading the work aloud. Ajit’s typewriter works are perfectly sized, and when hung together seem to become one free-flowing system. There were no corny pictorial cop-outs. I like knowing that a fixed machine can create such abstract music. There would often be a shape or shell underwriting the glorious hyper-moving funnel of slashes, periods, god only knows, none of the keys used were necessarily recognizable on first glance. This show was intensely beautiful therapy for me.

Your last post found you visiting Veronica de Jesus’s studio in 2012; before that, you were dropping by flea markets and interviewing curators (among other things). Since then, you’ve published a collection of poems, Language Arts, the description for which notes that you “[use] poetry as a way to record [your] own adventures”. Did any of your “adventures” for Open Space inspire poems elsewhere? How do these journeys and interactions with various communities feed into your work?

My time at Open Space taught me to loosen my tongue and allowed me to outgrow my fear of the complete sentence. My earlier work had been so involved with the handling and joining of white-hot fragments of verse that the composition would involve a lot of stops and starts and rearrangements of lines. After blogging, my line seemed to surge ahead and to remain in place, to gain more immediate traction, but with no less variety. A lot of thoughts that I had worried were too obvious when I included them in my blogging turned out to be exactly the ideas people picked up on, so writing on art felt forever easier after that realization. I have kept in touch with most of the artists I covered in my time writing for Open Space, and now I always seem to have deadlines for a new piece of art writing. I have written pieces for Oscar Tuazon, Neil LeDoux and most recently a piece for a catalog of Christopher Garret’s collage rubbings. I like always having an essay or introduction to write. It makes the time I lock off for poetry even more pleasurable.

This Tuesday [9/8/15] I am going to take part in a reading at City Lights Books to celebrate the release of a new John Wieners Selected Poems, Supplication, published by Wave Books. I have been such a fanatic about his work for so many years now. I look forward to reading with a bunch of other true blue John Wieners addicts. To convey the drama and phrasing of John’s line can be a formidable task, so I’m looking forward to hearing how others will “land” these poems. The next morning, I am flying to Seattle to give a reading at Richard Hugo House with a few other Wave authors. I’m from Suquamish, a reservation across the Puget Sound from Seattle, so I will spend a few nights there with my family too.

I’d like to say thanks to Suzanne Stein for asking me to blog for Open Space. It turned me from a seething poet into an all-around writer.

Cedar Sigo was raised on the Suquamish Reservation in the Pacific Northwest and studied at The Jack Kerouac School of Disembodied Poetics at the Naropa Institute. He is the author of eight books and pamphlets of poetry, including Language Arts (Wave Books, 2014), Stranger in Town (City Lights, 2010), Expensive Magic (House Press, 2008), and two editions of Selected Writings (Ugly Duckling Presse, 2003 and 2005). He lives in San Francisco.