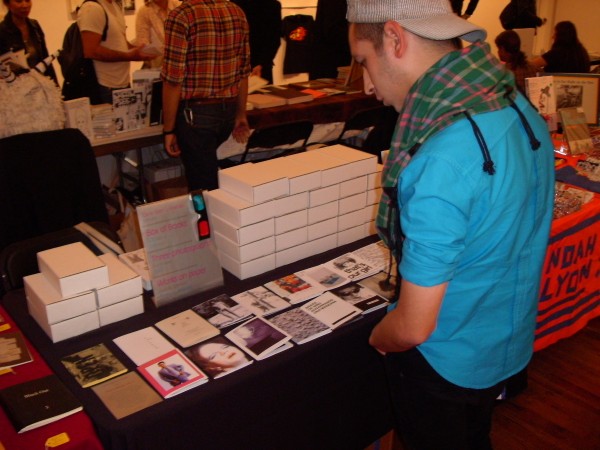 Darin Klein is an artist, writer, curator and publisher. His publications include Afterlife, To & From, Control Issues, Thing, Celebrity Themed Fan Zine, The Moment Collector, and Box Of Books Vol. and II. He is currently living in Los Angeles, where he works for the Hammer Museum.
1. BOX OF BOOKS: VOL II. IS ONLY THE LATEST OF YOUR PRINTING PROJECTS. THEY ALWAYS MAKE IT FEEL PERFECTLY NATURAL THAT WRITERS AND ARTISTS SHOULD BE PRESENTED SIDE BY SIDE. WHAT MADE YOU DECIDE TO UNDERTAKE VOL. II? Being invited by AA Bronson to participate in the Friendly Fires section at Printed Matter’s NY Art Book Fair three years in a row has been a total honor. Both volumes of Box of Books, editions of 100, were created to take to the fair and to distribute among the contributors. The first volume contains 20 books and was a total success at the fair. Vol. II contains 21 books and it was a natural follow-up. There are so many artists and writers that I still want to work with, and I keep meeting more. I’m already asking people to contribute to Vol. III to take to this year’s fair. Plus, there’s a kind of teaching and community-building aspect to the process. There’s a special technique that each contributor must use in the creation of their book, and it’s fun to work through that with people. It’s funny you mention artists and writers side by side – many projects that have inspired me manage to combine the two practices to wonderful effect. I’ve had a harder time getting writers to contribute to this project, possibly because they fear their work will be out of place next to the work by visual artists, but maybe it’s because visual artists have an easier time with the tactile aspect of actually creating these things. As you can see from Box of Books, Vol. II, writers like Amina Cain, Patrick James Dunagan, Lamesha Melton and Max Steele give examples of how text can be as compelling as image, and how well their work compliments that of their visual counterparts. Kevin and Dodie, if you are reading this, the invitation still stands…

2. I HAVE ALWAYS TRIED TO IMAGINE WHAT YOUR PRIVATE COLLECTION OF ZINES, SMALL PRESS BOOKS AND EPHEMERA MUST BE LIKE, ARE THERE ANY BOOKS THAT STAND OUT? THAT YOU FIND YOU RETURN TO MOST OFTEN OR LOVE THE MOST? Hmmm, of the thousands of works in my collection, my favorites are always ones made or written by people I know. I started collecting in San Francisco, and many of my favorite ‘zines and chapbooks are made there. All of your writings and your Old Gold publications of other writers are incredibly dear to me. Former San Franciscan Will Yackulic is a genius, and you highlighted his latest edition with care and respect on this very blog. Noel Black’s solo works and his Angry Dog publications are wonderful, as are Marina Eckler’s, who also worked on Angry Dog with him. I love Auguste Press and Lew Gallery (along with anything by Micah Ballard and Sunnylyn Thibodeaux, who operate those endeavors). Aiyana Udesen makes amazing “How-to-Draw” books pairing celebrities and unlikely animals. Works from outside San Francisco that rank among my favorites are the Bedwetter Publications and other projects by made by Christopher Russell. I have loads of random works that fuse interesting materials, unusual binding techniques or unexpected packaging with meaningful content. Queer stuff, underground culture, handmade books and particularly obscure publications in limited editions continue to attract me after two decades of collecting, producing and promoting independent publications.

3. WHAT DO LIKE AND DISLIKE ABOUT SAN FRANCISCO AND LOS ANGELES RESPECTIVELY? THINGS YOU MISS WHEN YOU ARE VISITING? I really appreciate the weather in Los Angeles. I was maybe slightly emotionally unstable during the time I lived in San Francisco. An abundance of light and warmth seemed to remedy that fairly quickly. Or did I just grow up a little? Unfortunately, ‘zines are hard to find in Los Angeles. I do manage to sniff them out. Louis M. Schmidt, a grad student in the Visual Arts department at UC San Diego who I regard very highly and have had the chance of working with lately, makes the fantastic Move Along People Nothing To Feel Here. My new favorite place in San Francisco is Matt Wobensmith’s GöteBlüd on Valencia, in the old New College building. He deals in vintage punk, queer and political ‘zines and publishes the comic Wuvable Oaf. I obviously still love San Francisco, I visit at least four times a year. I still have a lot of friends there, so meeting them is always on the agenda. I usually have to eat breakfast at the Home Plate cafe on Lombard and I like to go to the Kabuki baths. Los Angeles Mexican food is fantastic, but I also love the San Francisco style you don’t find anywhere else. In Los Angeles, I swim a lot and it’s also the town where I landed my first real, paying job in the arts. Both places have proved to stimulate me in many ways.

4. DID YOU WANT TO SAY ANYTHING ABOUT WORKING AT THE HAMMER MUSEUM? ANY HIGHLIGHTS DURING YOUR TIME THERE? ANYTHING COMING UP? I never went to college, and learned everything I knew on the streets of San Francisco – hopefully, one or two of your readers will recall scene/escena gallery that I ran with Jim Schatz in the Mission, or any of the shows I curated in other spaces. However, the Hammer has provided a great education as far as the how an institution operates versus independent spaces. Actually, at the Hammer, the two modes of operation can coexist wonderfully. The programs I’ve organized there have benefited from financial and other forms of support, while still maintaining the level of content I always seek out for DIY venues. Some of the many highlights include booking the first live appearance of Devendra Banhart’s band Megapuss and organizing the West Coast premiere of the film The Yes Men Fix the World. Annie Philbin, Hammer Director, asked me to curate an exhibition for the museum which resulted in Christopher Russell’s Hammer Project. I couldn’t have been more pleased with the outcome. I have loads of ideas for the Hammer for 2010, so just check my website for updates – www.darinklein.net. I coordinate about 250 public programs at the museum every year (this month is my three year anniversary), but I kind of have to use my elbows to get programs of my own conception on the calendar.

5. WHAT ARE YOU WORKING ON NOW? Margaret Tedesco asked me to write a text piece for Carina Baumann and Cliff Hengst’s January exhibition at San Francisco’s 2nd floor projects – in fact, she urged me to step into the role of interviewer, which I really enjoyed. So I’m joining the ranks of the fantastic editions she creates for each show there. I’m organizing and hosting a release party on February 5th at workspace in Los Angeles for the second issue of San Francisco publication Original Plumbing that will include an exhibition of photos by Amos Mac and short films by Los Angeles artists dealing with gender and queer issues. Artist Jenn Kolmel is going to have her Mustache Station there to assist people in making their own using unusual materials and adhesives. I’m also working with artist Kate Barclay to put on an exhibition of her work and a month of complimentary programming at painter Amy Adler’s studio in Echo Park – check out www.darinkleinandfriends.blogspot.net for details. 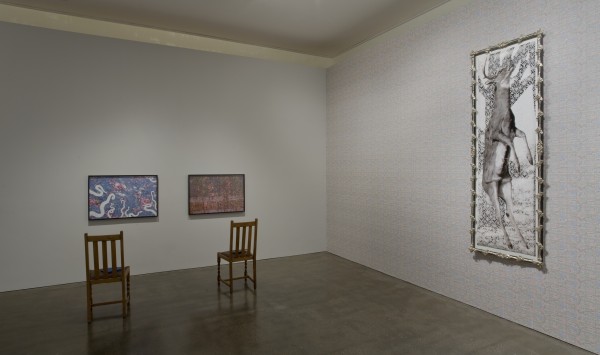