The Holy Spirit of the Sea 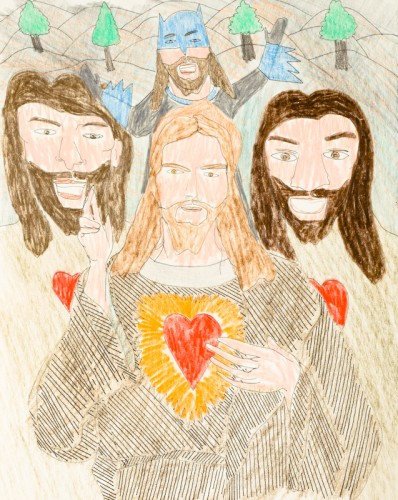 There were several portraits of Christ stationed around Veronica De Jesus’s studio. The light coming through the window kindly let the walls disappear a while (one hand of blinding white light washes another). These faces were let loose as apparitions for the length of my visit. They seemed apart from any series, single occasions that had since piled up. I had planned to write about these works without a single thought to Veronica’s last name. If I had I might have backed away from this premise. Obvious puns have always been lost on me. The image of Christ could stand for some reclaiming anyway. Upon seeing these pieces I immediately felt that even I had come to villainize his image, as one might villainize a corporate logo or the image of the president. 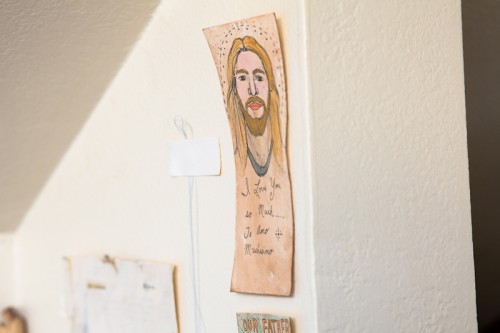 On the cover of Veronica’s latest edition of memorial drawings, Christ is rendered in a paint that dries more like red and green sealing wax. You can sense tiny bits of golden hash and moss crying up from between the cracks, suggesting the weathered face of a fountain in Tivoli Gardens. It’s as if a large key would fit inside his mouth. Another piece is a quick portrait in black made into a mask by cutting out both eyes. In one, Christ appears more classical, with “skin of burnt bronze and hair of lamb’s wool”; in another, he has fetal alcohol syndrome. He wears a T-shirt in my favorite portrait, looking like a young Matt Dillon, his broad shoulders blocking a view of the sunset. In one piece he even resembles Juno, the wife of Zeus, or a Medusa that’s been misunderstood (same hair).

Veronica does not repeat herself with regard to technique. The eye takes the situation in from the least obvious angle. It hides much of what you may think you want to see immediately. Step in as much as you like, but be sure and include the hands. The arrangement and number of Jesus works suggest that entrance has been granted before the first physical gesture of drawing. The fault lines have been laid in advance. Veronica also has come to be my favorite colorist in the Bay Area. Like maps charting rainfall — the earth must purge its glory at times — coloring is key to her system, a tempering of the almost psychedelic turn of corner (phrasing) in her lines. It always seeps up darker from beneath the imagery. 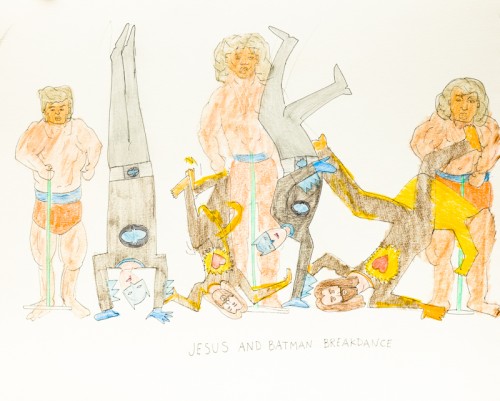 Of her more recent work Veronica has said, “Now I feel less worried about my control, and it’s given me even more control.” In a short written note she states, “I am protected by my own cosmology.” I have felt a similar fearlessness in my diving for “real” poetry. After completely upending my sense of time I’m washed ashore onto a further island, sometimes larger, sometimes smaller. I’ve no idea if what I have done is any good, I only seem to know when a piece is finished. 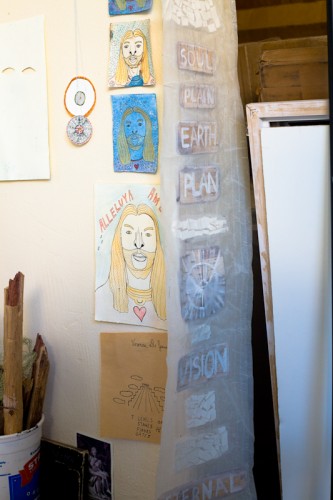 It feels much more necessary to ask why Veronica has started certain works than to look for any meaning or boundary after the fact. She keeps several of her series going at once, blind embossed visions running reel to reel. It seems most important that Veronica just plain survives in the world. I own her memorial drawing of the poet John Wieners, and her work often draws me back to his, in particular to his poem “The Lights in Town”: “Poetry appears that sure entrance to a storied paradisiacal garden, where pure patented mystique fulfills its indispensable acts.” Veronica’s values seem unattached to what becomes of the work after its execution, somewhat like the stories one hears of Wallace Berman, Ray Johnson, or Jay DeFeo getting by. She is currently working on a very large drawing. Its working title is Shaking the Void. It centers on a red phone or confession booth, its outline slightly splintered and slanted to tear us back from its foreground: Batman fancy-dancing, fanning his flames, a tank of amber light that fits all the way inside the wall. 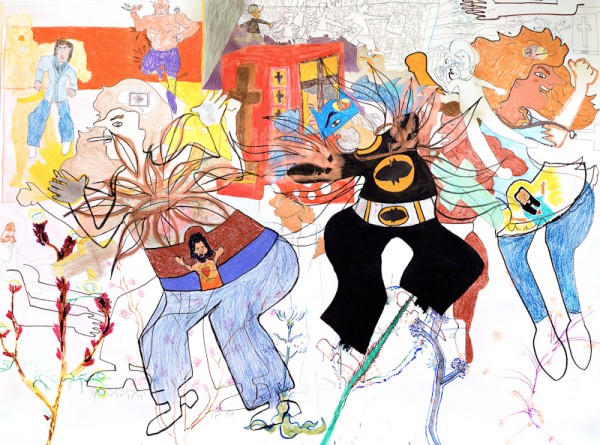