Nothing That Meets the Eye: Notes on Clones

“Taste has no system and no proofs,” writes Susan Sontag at the outset of “Notes on Camp” (1964). “Any sensibility which can be crammed into the mold of a system, or handled with the rough tools of proof, is no longer a sensibility at all. It has hardened into an idea . . .”

For Johnny, for showing me how to look.

“Taste has no system and no proofs,” writes Susan Sontag at the outset of “Notes on Camp” (1964). “Any sensibility which can be crammed into the mold of a system, or handled with the rough tools of proof, is no longer a sensibility at all. It has hardened into an idea . . .”

Part of what I am interested in tracing across this series is what happens after sensibilities harden into ideas, or into something else. What Sontag warns against is essentially a process of replication: the “mold of a system” is there to transform one kind of matter into the likeness of something else entirely. When ideas (or, say, a particular work of art) are repeated across different forms and mediums, those repetitions, in turn, produce their own kinds of effects, both spectacular and lackluster. The extent to which what has been re-presented is recognizable as iterative, or recognizable at all (“this looks like a/an X”), also arouses mixed feelings. As many after Freud have observed, things that come back or reappear can be unsettling precisely because they are familiar, close to home.

The man in the photograph appears to be in his late twenties or early thirties. His mustache is bushy enough to make it hard to pinpoint his age, but not so overgrown as to obscure a sweet smile. His Levis, like the rolled up sleeves of his flannel shirt and his unzipped hoodie, are relaxed; fitted but not too revealing. He leans against a wall, the sharply angled sidewalk beneath his black Converse forcing the rest of him into a kind of lazy contrapposto that is simultaneously sexy and goofy.

He is — as the white, all-caps text in the lower bottom left of the photograph states — an exemplar of “BASIC GAY” street style circa 1977. That’s the year when San Francisco artist Hal Fischer created the image as part of his Gay Semiotics photography project, currently on view again in San Francisco, at Ratio 3, after nearly forty years. The man’s clothing and grooming, as the composite of image and text dictates, make him an identifiable type among other types and in regard to other men who look like him. He could be called, using the parlance of the time, a clone.

“The gay culture’s new visibility has exposed a subculture developing its own myths, cultural heroes, stereotypes and sign language (semiotic),” writes Fischer, in an accompanying essay. Gay Semiotics nailed the subcultural shift that had occurred in the near-fifteen years since “Notes on Camp” and near-decade since the Stonewall Riots: Sontag’s marginal sensibility, cobbled together from the cultural discard pile, was still marginal but had morphed into something more codified, something that traded on desirability rather than abjection.

Enter the clone. The clone was, in Martin P. Levine’s appropriately science fiction-inflected phrasing, “the first post-Stonewall form of homosexual life.” With their masculine self-presentation (Levis, facial hair, gym-toned bodies, flannel shirts, leather accessories or gear) that projected sexual self-assuredness and availability, “clones came to symbolize the liberated gay man.” At the same time, the clone look — with its perceived repudiation of anything swishy, faggy, or feminine — was criticized as an expression of gayness that was at best severely limiting, and at worst, self-hating and fascist. In fact, gay activist and scholar Arthur Evans meant the term to be derisive when he coined it in the “Red Queen” broadsides he wheatpasted around the Castro in the late seventies. The word still comes off as pejorative, though its sting has dulled with time.

The academic frame of image and text Fisher put around these “myths, cultural heroes, stereotypes and sign language” creates a second-order index. Just as a red handkerchief in a rear pocket is no longer just a red handkerchief if worn on the left by a gay man, Fischer’s photograph and gloss of said handkerchief (in black-and-white, no less) simultaneously foregrounds the object and the practice while leaving only the “gay man” fully in view. Gay Semiotics preached to the choir in an outsider’s language, re-estranging that which cruising the streets and the backrooms of bars — behaviors and rituals that created “a form of homosexual life” — had made re-familiar.

An opinion piece in The Advocate from a few years back wonders if the clone has remained a constant aspect of gay culture, even if its outward appearance has changed over time. Dean’s psychoanalytic reading of the clone (following Leo Bersani’s) arrives at a similar conclusion by a different route, positing the clone as a timeless ideal that can ultimately illuminate our understanding of difference. I find the historical materialism at the core of the former thesis more compelling than the liberation promised by the latter. Dean’s argument is far more finessed, but I am more interested in what is taken up and what is left behind.

One of the most fascinating parts of the Ratio 3 exhibition are the large vitrines filled with printed matter from Fischer’s archive, among other sources, which shows the many ways in which Gay Semiotics has been cloned throughout its existence. Initially installed at San Francisco’s Lawson de Celle Gallery (there’s a photo of Harvey Milk dropping by to check out the exhibition), the series was then reproduced in a mail-order book, with individual images also available for purchase as postcards, packaged in the same brown paper used to cocoon explicit material. Scanning the ephemera, I realized that I had first come across Fischer’s work as an illicit copy, on a club flyer that repurposed one of the photographs to sassy effect.

At the packed opening for Gay Semiotics a friend and I remark on how Fischer’s subjects — especially the men in the “Street Fashion” section — look like any number of gay men who you see perched with their laptops in Mission cafes or crowding The Eagle during the beer bust. The men who show up in my Facebook feed in photos acquaintances post of long nights out or group hikes in Marin are now staring at me from the gallery’s tall, white walls.

When I get home I re-read Johnny Ray Huston’s essay about the late San Francisco filmmaker Curt McDowell. McDowell arrived at the SF Art Institute close to the Summer of Love but he didn’t need it; he was already such a fantastic pervert, so clear about who and what he wanted. Johnny writes about Curt’s movies — their corona of desire, the messy hunger that drives them — but he’s also writing about his own desire vis-a-vis a new form of gay semiotics: “I thumb an app and see a dozen guys who resemble Curt, lined up in rows. None of them are like him. They list their interests as selling points, presenting curated lives. A vintage San Francisco look is still available, but the facsimiles of thrift-store finds of 1971 are hundreds times more expensive today. I draw strength from the fact that pleasure and truth are still free.” 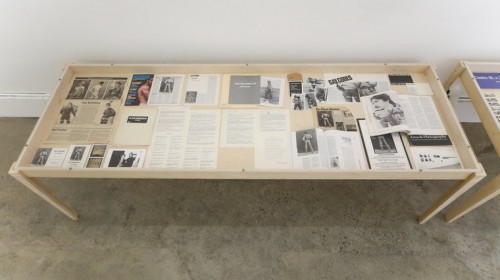 If, as Dean and Bersani would have it, clones make good on the possibility of repetition with a difference, then what difference is registered by the reappearance of gay semiotics now, among the affected vintage aficionados Huston scrolls past on his smartphone? Or in the graphic design sensibilities of the current gay dance underground? Or in more mainstream media representations of “post-” contemporary gay life, such as HBO’s Looking, which had such a problematic relationship to the very history it blithely used as window dressing?

Encountering Gay Semiotics four decades on, it is difficult not to view Fischer’s images as indexes for absence. I can’t help but wonder, morbidly, if their models are still alive. AIDS is the obvious reason for this but I don’t want it to be the only one, the thing that any encounter with loss must necessarily be thought through when discussing gay history after the seventies. My boyfriend points out that this absence is attributable to other factors too: aging, changing aesthetic preferences, gentrification. Circling back to “historical distance” as an explanation depersonalizes things too much for me. Maybe I’m afraid that depersonalization is the difference, when I think about what makes citation in 1977 more erotic than a contemporary citation of 1977.

However tongue-in-cheek Gay Semiotics comes across, it still makes clear that its subject matter was born out of utility as much as sensibility. The “rough tools of proof” Fisher cataloged, to borrow Sontag’s phrasing, put one’s sexual availability and tastes out there for a self-selecting audience who was equally in the know and on the hunt. Now, men who have sex with men have moved on to different protocols, different scenes, different signs. Fischer himself anticipated that the codes would invariably shift: “As economic, political and social levels of interaction fluctuate, the uses of the language will broaden and new, more evolved — overt as well as covert — terms will come into use.”

I write this essay at a time when the U.S. Supreme Court is only weeks away from an expected ruling in favor of same sex marriage, the Castro and SOMA are neighborhoods now shaped more by residents’ income bracket than their sexuality, and AIDS is no longer the inevitable terminus of a positive HIV diagnosis. The “uses of the language” have broadened to the point where the poses and paraphernalia of Gay Semiotics are now relics to be re-appropriated, regardless of the intent behind one’s approach.

“Is there a way to preserve or repurpose something of gayness, even as its primacy fades?” sighs Slate critic J. Bryan Lowder. “[…] for those still interested — for those who still need it — how might we go about being gay in a world where that’s now truly a choice?”  I sympathize with Lowder’s questions because, as a gay man who has formulated his own sense of identity partly through a preoccupation with now-outmoded gay aesthetics, I’ve frequently asked them of myself. They are also questions that are taken up by Gay Semiotics, which is both a record of its time and a self-reflexive exploration of how such records get made and for whom.

“Ultimately the clone represents an image of sameness, as well as of desirability, and thus a figure for imaginary identity,” writes Dean. “He makes the image of what one might have and the image of what one might want be the same image.” But for me, Fischer’s clones represent the opposite: an irrevocable split between what I can presently access of the past and what I might desire from it. Sending signals and inviting glances from across this temporal gulf, these men are both specimen and specters. For a moment, I attempt to hold them apart from Fischer’s mediation of their likenesses, and try and return their gaze.