Nothing That Meets the Eye: Not Pollock 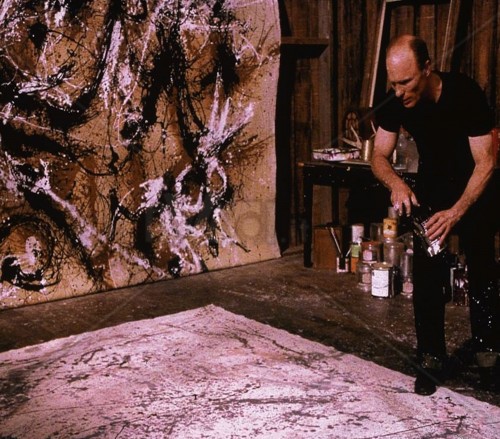 Everybody has that feeling when they look at a work of art and it’s right, that sudden familiarity, a sort of… recognition, as though they were creating it themselves, as though it were being created through them while they look at it or listen to it… ― William Gaddis, The Recognitions

When art goes to the movies, the consequences are often not happy for art. ― Avis Berman

A certain productive constraint resides at the heart of most biopics of visual artists: while attempting to provide insight into the person behind the art, such films are often limited by whether or not they can depict the art itself, and if so, to what degree. There are obvious reasons for this. Loaning out original artworks to film productions would be far too cost prohibitive and risky, inviting damage or theft. Copyright is another issue. Likenesses can only be made when the artist’s work falls out of copyright or if an artist’s executors or estate has given express permission. Manufacturing likenesses also poses the attendant issues of how to make the reproductions look realistic enough for the camera (and to pass for the audience) and, consequently, how to deal with them after production has wrapped so that they can’t potentially enter the market as counterfeits.

Consequently, filmmakers have had to become creative in translating an artist’s aesthetic — if not their actual work — to the screen. When access to original works isn’t required or available, a common solution is to evoke the artist’s artwork cinematographically, be it through set design and color processing (as Akira Kurosawa did in the Vincent Van Gogh section of Dreams), camera filters and post-production tricks (see the grotesque cutaway sequences in John Maybury’s Francis Bacon biopic Love is the Devil) or lighting design and framing (Derek Jarman’s Caravaggio). When reproductions or likenesses can be produced, scenic artists will go to great lengths to ensure verisimilitude. In a recent New York Times feature on the recreation of masterpieces for several feature films about famous artworks or artists, one production artist joked that “forgery” could almost describe his more-than-copied version of Gustav Klimt’s Portrait of Adele Bloch-Bauer I (1907) for Woman in Gold. 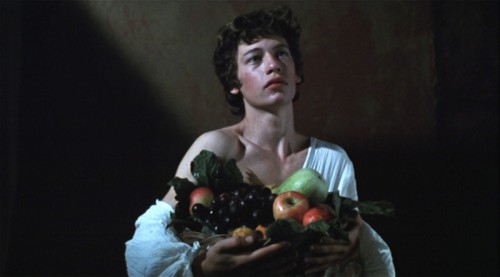 This “almost” is worth pausing over, because it touches on the interpretive problem that the creation and circulation of such replicas introduces (just as when I look at one of Sturtevant’s versions of another artist’s work, what aspect of “Klimt” and what aspect of Portrait of Adele Bloch-Bauer I do I see when I watch Woman in Gold?), while also alluding to the economic gray area that these carefully manufactured copies necessarily occupy given the value of the originals. No one goes to an artist biopic expecting that the experience of catching the likeness of a famous canvas, either glimpsed in-process or unveiled in its full glory at a key point in the narrative, will be equal to sitting face to face with that artist’s work. Rather, the reproductions provide referential ballast for the depiction of the biographical, interpersonal and psychic forces — the inner demons and grand passions, the relationship dramas and moments of inspiration — which play out on screen and which arguably “fed” the creation of the originals. The reproductions stand in for the “what” of an artist — that which the audience may already know or be familiar with via prior exposure — around which the rest of the biopic attempts to address “why” and “how,” questions of the artist’s significance and the meaning of their work. At the same time, these reproductions make it increasingly difficult to answer those questions separately from one another: what we may already know or be familiar with, visually, comes to shape our interpretation of what we think we are seeing.

The paintings created for Ed Harris’s much-praised 2000 biopic of Jackson Pollock, Pollock, present a limiting case for the reproduction of works of art on film. The Pollock-Krasner Foundation — which oversees the estates of both Pollock and his wife, painter Lee Krasner — gave the film’s scenic department unprecedented permission to execute 104 copies of works by and in the style of Pollock and 54 copies by and in the style of Krasner. Just as Harris’s performance as Pollock was compared to that of “a natural athlete executing an unparalleled feat after years of preparation,” the film’s scenic artists were no less concentrated or disciplined in creating the replicas (although they took shortcuts with methods and used contemporary materials). Even Harris himself created some of the works seen in the film, with the help of his painting coach, artist Lisa Lawley, who also generated some of the reproductions. The Pollock-Krasner Foundation was equally diligent: cataloging, identifying and indelibly marking each replica as such. The final turn of the screw came in the form of the exhibition Not Pollock / Not Krasner, for which a selection of the replicas was installed at the Pollock-Krasner House and Study Center in East Hampton, New York in the Spring and Fall prior to the film’s release.

Art historian Avis Berman, in her compact yet observant essay accompanying the exhibition, notes that, “paradoxically, these commissioned facsimiles had to be treated as respectfully as their original counterparts — cataloged, photographed and displayed — in order to establish their status as copies and prevent their being mistaken for the real thing.” Certainly, the Pollock-Krasner Foundation’s concern wasn’t unwarranted even if the measures it undertook were the same ones used to ensure a painting’s authenticity. Even during Pollock’s lifetime, his work was widely copied and he continues to be a perennial favorite of forgers. Perhaps, this is partly because of the relative ease with which people feel the artist’s drip technique can be approximated (an assumption which exposes the criminal implications of that oft-voiced critique of contemporary art, “my child could make that”) but also, conversely, because his style is so readily identifiable. Berman, however, cautions against following in the scenic department’s footsteps, reducing Pollock to mere technique or style. The “sense of unfolding discovery and liberation,” she finds so inspiring in his paintings, she writes, “is, by definition, utterly absent from the copies because all such decisions had been made for the artists recreating them.” The replicas are “flat and unconvincing.” 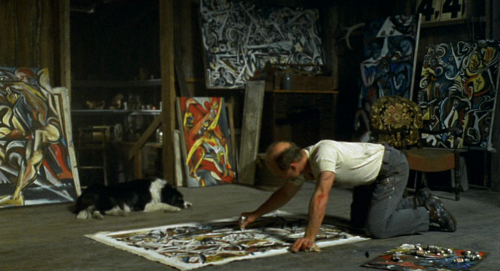 Earlier in her essay, Berman underscores the crucial differences between original and copy by way of a striking analogy: “Just as actors are impersonating artists, the paintings in the film are impersonating authentic works of art” (my emphasis). The distinction being drawn between “paintings” and “authentic works of art” feels forced but is made all the more odd by the anthropomorphic terms in which it is phrased, with one object “impersonating” another object. Setting aside the fact that copying has been a pedagogic strategy in art instruction for centuries, and that many of the world’s museums are filled with canvases done “in the style” of more famous painters, Berman’s choice of verb begs a series of questions. What would it mean for one painting to pose as another and what would it take for the pose to be convincing? Is there something in the material of the imitation that could evince something like “unfolding discovery” or “liberation,” that would allow it stand as a work of art in its own right? Or does that something reside in the viewer’s apprehension of the piece, the sense of recognition described in the Gaddis epigraph, as if the painting “were being created through them while they look at it”? And is that recognition all that’s necessary for a fake Pollock, however “flat and unconvincing,” to satisfy the criteria for what we think we want to experience from encountering an actual Pollock?

The number of posters or postcard reproductions of Pollock’s work (or of Klimt’s for that matter) out there in the world provides one affirmative answer to that final question. Artist biopics provide another. And despite the didactic intent behind the conception of Not Pollock / Not Krasner, the exhibition’s inadvertent enshrinement of forgery provides yet another affirmative response. The populist narrative about art, in America at least, goes something like this: we want confirmation that art is somehow spontaneous, the inevitable result of genius and circumstance. But we also want art to be the product of intention and elbow grease. Much avant-garde art over the past 50 years has worked to play these desires off of each other or to estrange them altogether. Artist biopics, however, make the paradox they present palatable even though, at times, they result in the generation of their own spectacular fakes.