Nothing That Meets the Eye: Cheap Imitations 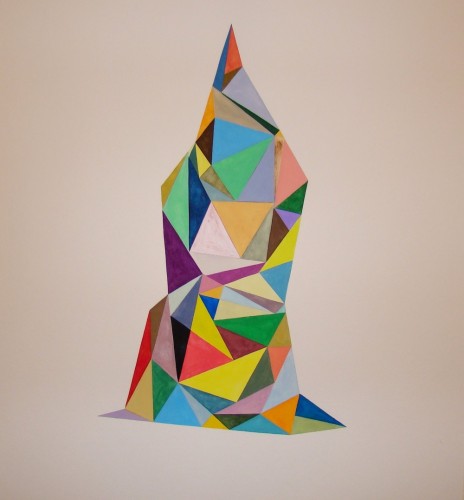 In my last post, I discussed how artist biopics ironically rely on painstakingly crafted stunt doubles of their subject’s most famous pieces in order to consolidate the romantic image of the artist as lone genius. Despite the suspension of disbelief that lets us overlook, say, the fake Vermeers in Girl With a Pearl Earring (2003), I wondered how the host of effects employed by such films — from “painterly” cinematography to the replicas manufactured by the scenic department — contours the affective experience of how we recognize what we are seeing, whether in a movie theater or a museum gallery.

In some ways, the bait-and-switch performed by artist biopics mirrors the more mundane experience of looking at one artist’s work and being reminded of another’s. As a kind of shorthand for jotting down initial impressions such comparisons can be useful. At the same time, drawing in another work can make it harder to consider a piece on its own terms, which can subsequently invite clichéd evaluations of the “X is like Y on acid” variety (I’ve been guilty on both counts).

Resemblance, of course, is a matter of both kin and kind, something underscored by the remark, apocryphally attributed to film director Samuel Fuller, that, “homage is just French for rip-off.” Offering a catty rejoinder to the chestnut that imitation is the sincerest form of flattery, Fuller calls a spade a spade twice over. In skewering the Gallic-edged cloak of pretension that would allow a sub-par copy to be passed off as something else, by either critic or artist, Fuller’s barb also points to the souring effect that resemblance can produce. Even if the conceptual frame is enlarged — as with Sturtevant’s art — to allow “likeness” to become the engine of the work a piece still needs to hold its own, whether as copy, tribute or response. However, an inadvertent resemblance that is too strong or, conversely, that is not strong enough, consigns a work of art to a unique sort of unfavorable limbo (and also can invite legal action, if commerce is involved).

A locally relevant example comes to mind: the ongoing proliferation of not-so-great art that mines the aesthetics of the Mission School and, in particular, the work of Chris Johanson. Like an uncanny double spotted out of the corner of one’s eye amidst the crush of the crowd, I feel like I see likenesses of Johanson’s work almost everywhere I go. His sunburst-shaped rainbows and clusters of brightly colored triangles hang on the wall next to me as I wait in line at my local ice cream shop. His distinctive slanted lettering in all caps is now seemingly scrawled on a million beige tote bags. His everyday people, painted in uniform profile, can be counted on to make perennial appearances in select canvases at group art shows. And it doesn’t take but a few shuffled keywords for Google to turn up instructions on how to create your own Johanson-esque pinwheel painting. 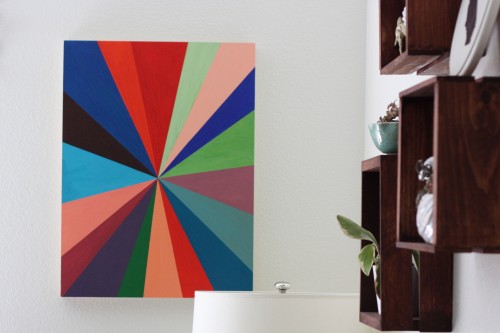 These sort of ersatz pieces appear often enough to register as what I would call a tendency, though their aesthetic disparity prevents their recurrence from gelling into anything as coherent as a trend (however much triangles or certain color combinations now scan as trendy). Superficially, it’s easy to see why Johanson’s art is so immediately appealing. From a purely visual standpoint, his choice of colors comes off as warm, uplifting even. There is also, frequently, not a lot of information to process. His simple compositions and clean lines can be taken in (although certainly not fully appreciated) at a glance, giving odder or more melancholy subject matter an innate charm. His work practically beams at you, and it’s often hard not to crack a smile in return.

Johanson’s art, like that of his peers, also speaks a particular vernacular. As a spate of recent local exhibitions has made clear — and here I’m thinking of the Oakland Museum of California’s recently closed Fertile Ground: Art and Community in California, Energy That is All Around at the San Francisco Art Institute in 2013, and the Berkeley Art Museum’s Barry McGee survey from the year prior — Johanson’s art is very much tied to the community of fellow artists he was a part of, working in the particular place and time of San Francisco’s Mission District in the ’90s.  Their work is as much a testament to the politics of collaboration fostered by that place and time — one without $4 slices of toast, social media, or a relentlessly punitive rental market — as it is a record of encounters with the brilliant accidents, junked artifacts, and daily grit of urban life.

Seeing the Mission School’s re-visioning of color and line, figure and sign, diffused across so many lesser iterations is both fascinating and irritating. Perhaps what I’ve described is another ripple in the larger shift in market forces Jerry Saltz bemoaned as the primary culprit behind why so many recent abstract paintings being made by younger artists are indistinguishable from one another. That doesn’t make the slight felt by encountering an almost-Johanson or almost-Alicia McCarthy feel somehow less personal, even though, like many Bay Area natives, I became aware of the Mission School after the fact. Maybe it’s that the cheap imitations are reminders that the conditions of possibility have shifted in this city: the prospect of artists living and working together, especially in the Mission, has become even more precarious, while (thanks largely to the Internet) the stakes of siting art to a particular location have become both looser and more niche.