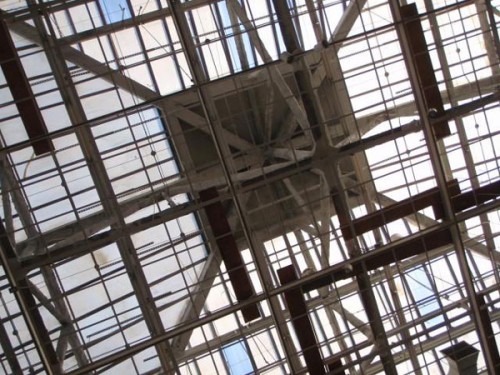 Skylight of the hall used for Art in Cinema screenings. Yes, light leakage was an on-going problem at these non-theatrical presentations.

Sitting on as many folding metal chairs as could be crammed into the 4th floor make-shift auditorium — I’ve seen counts ranging from four to six hundred — the usually rapt audience were treated to many of the delights (as well as cinematic alfalfa sprouts) Stauffacher had been able to discover in his research: the fruits of Surrealism and its associates, such as Buñuel and Dalí’s Un chien andalou and Cocteau’s Blood of a Poet; works by the non-objective greats and their contemporary progeny: Oskar Fischinger, Len Lye, and the Whitney brothers; classic European poetic documentary, such as Joris Ivens’ Rain, and films by Maya Deren, the dynamic and solitary deity of the current American experimental scene. Most of the time, Stauffacher only had 16mm projectors available for screenings, limiting his choices among already scarce commodities. Prints were difficult to pry from often hidden and recalcitrant sources (though MoMA’s collection initially served as a stalwart backbone). Silent films were usually accompanied by artfully chosen phonograph tracks, often selected by the filmmakers themselves from discs commonly available in record libraries. When possible, filmmakers like Deren were engaged to travel from distant parts to appear with their works—such presentations made for electrified, newsworthy evenings. Stauffacher himself was by all accounts a vivacious and charming personality who engaged with his audience to play to their likes, and, more often, to massage their prejudices in order to foster a gentle reception to increasingly challenging work. 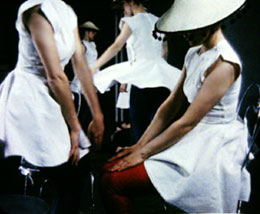 Stauffacher put whatever time he could into his own filmmaking efforts, and over the years was able to produce a modest, but quietly brilliant output with such titles as Zigzag, Sausalito, and Notes on the Port of St. Francis. Though scraping by as a commercial artist (and later, for a brief period, as a creator of advertising films for television), Stauffacher made little or no money with his Art in Cinema success: all his energies were focused on a long-term goal—the creation of a culture welcoming to new indigenous American experimental filmmaking. It would be a culture responsive to his own work, and that of his associates, but what shape these new developments in film art was to take was an open question. Realizing early on that the experimental classics available for rental would soon be exhausted, Stauffacher had encouraged locals who’d been jazzed by his shows to join the cinema game, and quietly subsidized their work from the Art in Cinema proceeds. His roster of talent would form the nucleus of the soon-to-be-legendary Bay Area scene: Sidney Peterson, James Broughton, Jordan Belson, Harry Smith, and Hy Hirsh. Many of the works of these tender geniuses were most definitely not well received: a few of Peterson and Broughton’s Freudian-tinged efforts, for example, met with bruising responses. Others, such as Harry Smith’s abstract 3-D films accompanied by a live improvising bop combo, seem to have made the grade to be counted as high points in the series’ nine-year duration. At any rate, whatever the tone of audience feedback, a generation of beginning filmmakers got hooked by the experience of having a thousand-or-so eyes encountering images they’d photographed and spliced together (and sometimes painted). Without a doubt, Stauffacher and his Art in Cinema brought into existence the filmmaking quotient of the San Francisco Renaissance, a legacy still vibrant today. 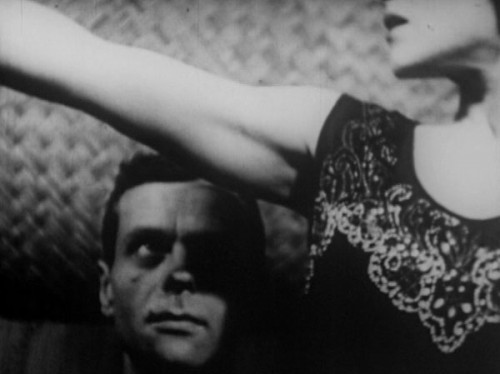 James Broughton in his Adventures of Jimmy (1950), photographed by Frank Stauffacher

Unfortunately for those of us fascinated by Frank Stauffacher and Art in Cinema, his story has a tragic end. Diagnosed with brain cancer in 1953, he underwent what sounds to have been a horribly painful, and ultimately unsuccessful operation, and died in 1955, leaving behind his young wife and daughter. Making one’s way through Art in Cinema: Documents Toward a History of the Film Society, one might be forgiven for dreading what might be anticipated to be a sudden and unresolved conclusion. There are felicitous discoveries even towards the book’s end, however — those of us as taken with Golden Age Hollywood as experimental film will be entranced by details of Stauffacher’s rediscovery of American narrative filmmaking through a fresh discovery of the personal artistry of the American film director. Late in his and Art in Cinema’s career, having exhausted much of the best available experimental work, Stauffacher turned his eyes south, and the last two series comprised a tentative exploration of Hollywood filmmaking as art, for which such maestros as Vincente Minnelli, Frank Capra, and George Sidney flew up to our Baghdad-by-the-Bay and nervously made their way to the SFMOMA microphone in front of the Art in Cinema screen. This is likely to have been the first time these great figures publicly discussed their work within the framework of being artists, yet another coup in Stauffacher’s unyielding, trailblazing career. This mixing of normally oil and water filmmaking modes, all the rage amongst today’s internet-era cinéphiles, has its origins, to some extent, in the Art in Cinema-mastermind’s inexhaustibly exploratory psyche. 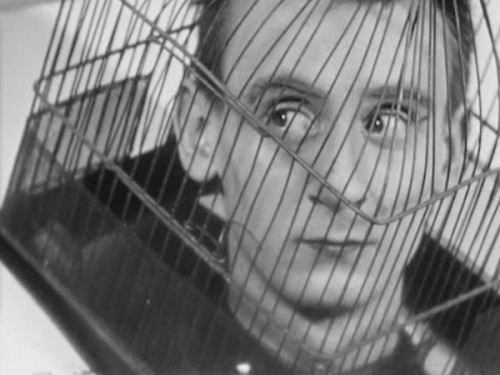 In an interview late in MacDonald’s book, Barbara Stauffacher Solomon intimates her husband, had he lived, might have set his sights on becoming a Hollywood filmmaker himself, and what the creator of Zigzag and the brilliant Sausalito might have done in a “movie” context is a fascinating point of conjecture. Be that as it may, the tragically short life of Frank Stauffacher left behind some very-untragic endowments: the still-vibrant culture of Bay Area experimental film, including such organizations as Canyon Cinema and San Francisco Cinematheque (these at one time conjoined institutions were born long after Stauffacher’s death, but would probably have been unthinkable without the environment he created), and those happy moments when cinema is given its due in the museum world, despite its uncommodifiable nature as collectible artifact. For those of us cinematically oriented, Art in Cinema is SFMOMA’s finest hour. 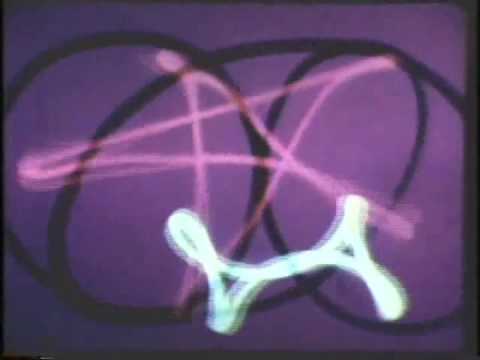 Stay tuned—over the next few weeks, I’ll be exploring the work (and especially one film in detail) of one of Stauffacher’s protégés. This series will propose as another Art in Cinema legacy nothing less than the entire moving-image culture in which today’s world is immersed.

If you enjoyed the quotation in part 1 of this article from Barbara Stauffacher Solomon’s autobiography, check out this more extensive excerpt which provides further details on Art in Cinema and the scene centered around her husband’s activities, as well as delightfully saucy descriptions of alcohol-soaked SFMOMA festivities. As I’m sure you’ve already gathered, this lady can write!  I’m informed, btw, that Dominic Willsdon covered much of the same material as my last two posts in his well-attended March 2nd lecture, including Stauffacher Solomon’s description of the Art in Cinema scene…