The series of film programs occasioned by SFMOMA’s 75th anniversary, 75 Years in the Dark, got me thinking about the history of film at our museum, and led me to read Scott MacDonald’s book Art in Cinema: Documents Toward a History of the Film Society, which details the nine-year-long program that was, without doubt, the brightest constellation within the long tradition/non-tradition of film at SFMOMA. What follows is the first of a two-part report/meditation on what I’ve gleaned: 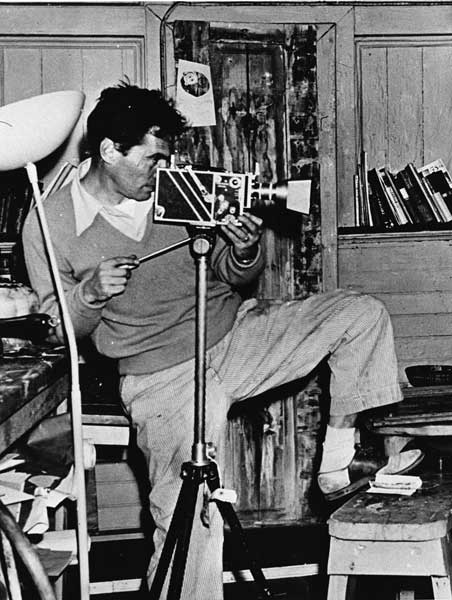 Art and cinema, cinema and art… What, exactly, do these have to do with one other? Since entering the museum world ten years ago, I’ve been regularly disturbed by intimations of film’s status as art being uncertain. Growing up in the 70’s and 80’s, I took this to be a long settled controversy. Cinema had taken over and won the day. Despite its youth, or, of course, in part because of it, cinema was THE art, the art which subsumed all others, the Seventh Art, as it was proclaimed in France by Ricciotto Canudo in the 10’s and 20’s of the 20th C.—yes, a hundred years ago, roughly around the time Lenin described cinema as the “most important of the arts”. But in the Anglo-Saxon cultural sphere, this took a longer time to sort out. The age-old distrust of strolling players and their greasepaint still obtained in the concurrently lingering rubble of Victorianism, and how could a medium which merely “recorded reality” be an art? That such maestros as Griffith and Eisenstein were more in the business of molding experience, and creating “realities” was hard for some to appreciate given the commerce and/or propaganda involved. That cinema had infected the modern psyche with its medium specific sense of time and space, that its impact was directly registered in such major works of non-cinema avant-gardism as Joyce’s Ulysses and Duchamp’s Nude Descending a Staircase, No. 2, were only sources of mistrust by key participants in the culture: rear-guardist litterateurs, who resented all this experimental and show-biz jazz, and also those with money: film more than any other art, after all, made those greenbacks disappear. Consorting with movie stars certainly had its charms, but as investments picture-shows were, at best, a gamble. And how could you take yourself seriously once involved with the sawdust and tinsel bestrewn flicker-world your English professor had railed against?

That such Modern Art Titans-in-The-Making as Marcel Duchamp, Man Ray, Fernand Léger, and Salvador Dalí became entangled with cinema was perhaps a decisive factor for key movers-and-shakers: New York’s MoMA initiated its film collection in 1935, half a dozen-or-so years after the museum’s inception. From the opening of its permanent home in 1939, MoMA featured almost continuous film programming as part of its mission, initiating an on-going process of legitimization for what its website currently describes as the “predominant art form of the twentieth century”. But although film was now clearly understood by the enlightened as an art medium, acceptance, even celebration within Modernism’s increasingly hallowed halls could not resolve a paradox central to the problematic of film art: how was cinema to function productively for independent artists? Gallery-based artists routinely operated under the fictional conceit they were solo agents, responsible only to themselves. The work, most obviously, of a painter, was inexpensive to produce. A professional dishwasher might scrimp and save for oil paints and canvasses, then find himself on easy street, proclaimed a genius. If the work found no takers, he could laugh it off and declare himself (or, less often, herself) no slave to fashion or gallery proprietors. The celluloid artist was in an entirely different boat: he or she was working in the most expensive art medium in history, and one, ironically, uncollectible. Film prints, unlike photographic prints, which reside safely in frames behind glass, are run through projectors for viewing, rendering them less perfect each time. Photographic prints make marvelous wall decor, while films require some minimal amount of theatrical presentation, and take time and concentration to experience. For these, as well as who-knows-how-many-other-reasons, film collecting never caught on as investment. Nevertheless, the 20th C. had film on the brain, and a culture developed in which artists who had virtually no chance of financial remuneration—let alone success—put their own, often meagre, financial resources into their film productions, motivated simply by passion. 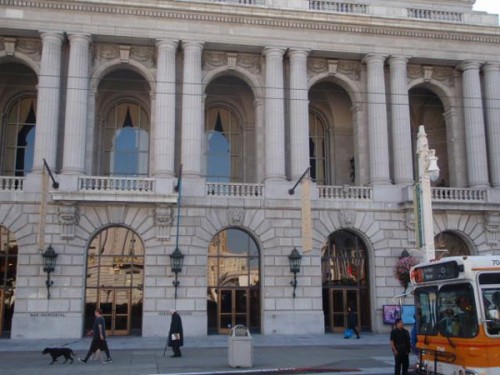 A recent photo of the War Memorial Veterans Building, the upper floors of which, from 1935 to 1995, were the home of SFMOMA

MoMA may have been the clear hero in this story thus far, but another, arguably equally important (and much closer to home) was shortly to arrive on the scene: SFMOMA, or, as it was known until 1975, the San Francisco Museum of Art. The Museum’s founding director, Grace L. McCann Morley, began film screenings in 1937, just a couple-or-so years after the institution opened its doors. In 1946, Morley welcomed filmmaker Frank Stauffacher and associates into SFMOMA to program the now legendary Art in Cinema series, which ran for nine years, and had still uncharted effects on the world of film, art, and the entire media culture we live in today. Scott MacDonald’s Art in Cinema: Documents Toward a History of the Film Society, published in 2006, has rectified the scarcity of information about Stauffacher and the culture he created, but the assimilation of this knowledge into our understanding of the history of film art has barely begun. (An interview with MacDonald regarding Art in Cinema can be found here, and a detailed review of MacDonald’s book by the formidable and lucid Irina Leimbacher is available here.) 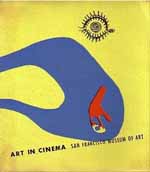 Cover of the first edition of the Art in Cinema Catalogue

Frank Stauffacher was a budding filmmaker who set out in Art in Cinema to create a public exploration of film art’s history and aesthetic development in order to inform and inspire his own work, and to foster a Bay Area culture of experimental filmmaking appreciation and practice. All this was accomplished in spades—each series routinely got press coverage, and in an age when these kinds of films were virtually unseeable in the Bay Area, and therefore possessed the lure of forbidden candy, this all-but-guaranteed his series (tickets for which were available by subscription only) sellout crowds. Strange, mostly short film artworks tickled the fancy of wide swathes of art-interested San Franciscans, and the Art in Cinema shows were instantly fashionable soirées, events at which to see-and-be-seen. In her (I believe still unpublished) autobiography, Stauffacher’s wife, artist Barbara Stauffacher Solomon, sets the scene: 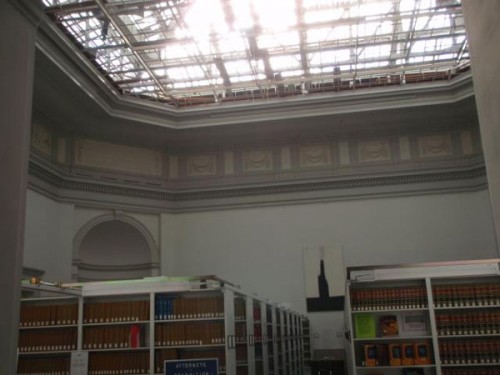 “The audience was the best part of the performance. Berkeley professors with tweed jackets and frumpy wives… arrived early to get good seats. Architects and their dates, high-styled with expensive haircuts, dressed in black-and-white, or grey, or black-and-grey, looked for seats near each other or rich looking potential clients. Young lawyers arrived in three-piece suits with ladies in pearls and little black dresses. The Woman’s Board of the Museum, socialites, and rich blondes devoted to the arts, and Frank, wore cashmere sweaters, Pre-Columbian jewelry, and pageboys, and walked as if they owned the place and their gay escorts. Pretty young women, recently graduated from Art Appreciation 101, who had practiced how to eat hamburgers without smudging their lipstick, looked for sensitive young men. Artists on the GI Bill, recently attacking the Axis, instead of big canvasses, jazz musicians, and poets arrived late, wore black turtlenecks and Levis, and slinked into the remaining seats or slumped against the walls…. It was a pity to turn the lights off.”