At 6am this Wednesday morning, the iconic and colorful Sol LeWitt Wall Drawings #935 and #936 will be “deinstalled” (read: painted over), in part to make room for some VERY BIG sculptures that will be part of the upcoming Martin Puryear exhibition in November. Any SFMOMA search on Flickr will immediately turn up dozens of images of these works. The drawings, having lived in the Atrium for eight years, seem practically synonymous with that space, or even with the museum itself. Local artist Chris Cobb was part of the team of artists who worked on the Sol LeWitt exhibition at SFMOMA in 2000, creating many drawings from LeWitt’s instructions.He reflects on the strange ‘passing’ of the drawings.

As SFMOMA prepares to remove Sol LeWitt’s Wall Drawing #935 and #936 from its Atrium, I’ve been working at the Massachusetts Museum of Contemporary Art, helping to install LeWitt’s last project and the largest retrospective of his work ever, consisting of over 100 of his wall drawings. MASS MoCA is working with Yale University and Williams College to create what’s got to be one of the most dynamic installations in the country. MASS MoCA has given an entire three-story factory building to the project and as of this writing it is has taken a small army of drawing installers, interns, and apprentices close to five months to complete. When all is said and done, the exhibition is scheduled to remain in place for twenty-five years. 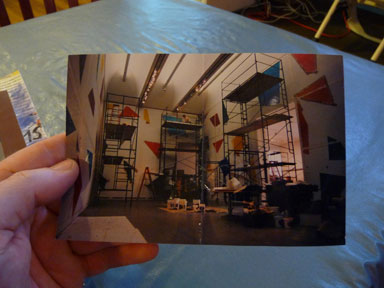 Snapshot of a snapshot: LeWitt installation in progress @ SFMOMA, 2000. This was an ink wash wall drawing that was made by building up layers one at a time, letting them dry and then adding the next layer. (Chris Cobb)

Wim Starkenburg, one of my fellow drawing installers here and at the SFMOMA retrospective, was in charge of executing #935 and #936 at SFMOMA back in 2000. He is now 61 and worked for Sol since the 1980s. When I broke the news to him about the deinstallation (after all, #935 and #936 have been there for eight years), Wim was surprised they were being removed because he thought they worked so well with the architecture. I speculated that maybe they went a little too well with the building and that rather than being a permanent motif it might be nice for them to vanish one day into memory. Longing, it seems to me, is one of the deeply moving aspects of LeWitt’s art. On one level it has a powerful physical presence but on another level the work is temporal and fragile. Still, the wall drawings exist only as a set of instructions. Because the drawings are a map of an idea, his concept is like that of an architect–an architect designs a building and then has people build the building. Sol LeWitt’s work is similar in that he comes up with the idea of how a drawing should look and how it should be made, and then he has others execute the plan for him. We drawing installers feel connected to them because we put our time and energy into making them, but in the end, they aren’t the art – the instructions are the art. Wim understood this. 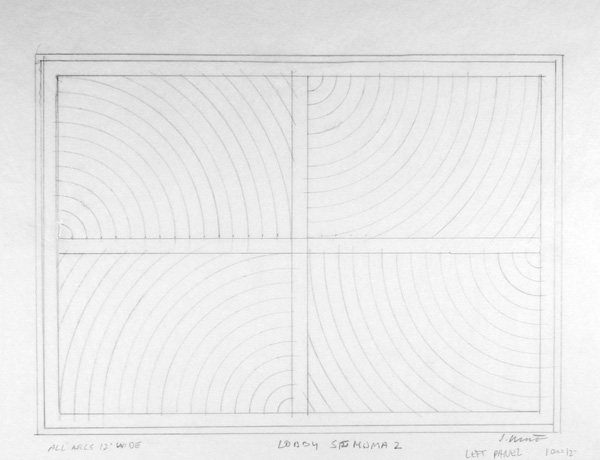 I remember that in 2000 I had just graduated from the San Francisco Art Institute and that a teacher there, Léonie Guyer, asked me if I would be interested in working on the Sol LeWitt retrospective. I can’t remember how many wall drawings there were, but definitely more than thirty. Work teams changed up from time to time so I got to work a little bit on almost all of the drawings. But the first job I had was sharpening pencil leads. I remember estimating that in a week I had sharpened about five thousand pencil leads. Each wall drawing had a team of people working in either crayon, ink wash, acrylic paint, or in graphite. And if the drawing was in graphite, sharp lines were essential. As a pencil lead is dragged across the bumpy surface of a wall the line gradually becomes grainy. Depending on the wall, the leads might only last long enough to make two or three lines before the line quality is too rough, hence the need for someone like me to just sit and sharpen pencils. Working on LeWitt drawings can be like Zen Archery, where the student holds the bow for weeks before being given an arrow, but then holds the arrow in place with the bow again for weeks before being allowed to shoot. Only after holding the bow and then holding the arrow for a length of time is the target allowed to be shot at. In this way the student learns to be as close to his/her tools as possible so they can become second nature. Maybe this sounds a little bit hippie but if you sharpen five thousand pencils you really become familiar with them. You also develop a profound reluctance to waste materials or to take them for granted. I have found, in general, this is not taught in art schools much these days.

I think that back in 2000 #935 and #936 were almost the last works to be completed. One of the best memories I have from then was standing on the scaffolding in front of the partly finished drawings with Wim, who came all the way from Holland to do the project. We were looking down at the empty lobby. We both knew that all the work we had done was going to be painted out one day because the eventual absence of the work was built in to its presence.