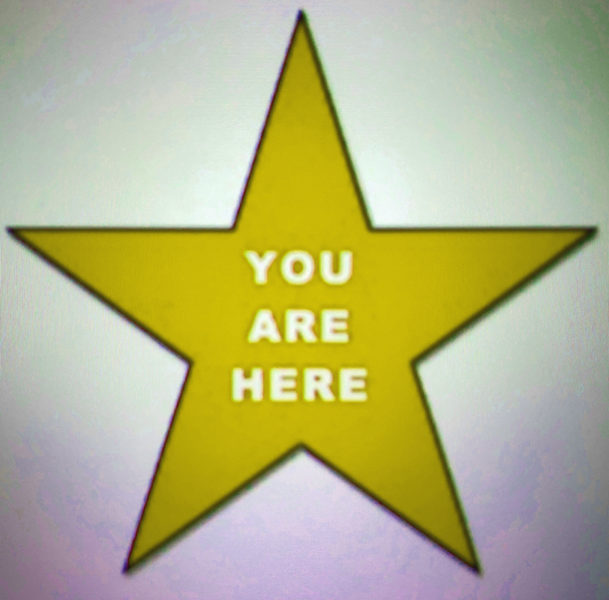 I’ve always appreciated how the gold star on the map at the mall simultaneously nods to and deviates from celestial navigation. Instead of wayfinding according to a magnetic pole, the star orients you to yourself, announcing in all caps: YOU ARE HERE, three words that center your body and mind in space, in the present tense.

Where are you right now as you read this? Do you imagine yourself at the center of your map, or is the gold star positioned far away? In the realm of professional artistic practice in the US, many artists navigate their careers by the magnetic poles of New York and Los Angeles. Despite the hyperconnectivity of our current moment, the amount of attention on art production and exhibition (to say nothing of sales) in these two cities seems to reflect a persistent assumption that smaller art scenes lack sophistication. But do the facts bear this out? Dig into the data and you’ll find all sorts of studies that reflect the rigor of cultural activities being produced far, far outside of the major art centers. As the NEA reports: “Rural arts organizations are as equally likely to rate as ‘substantive innovators’ as their urban counterparts,” — with the term substantive innovators referring to “businesses that […] create intellectual property worth protecting.”1 Another common presumption holds that most of the economic output in the arts is confined to established art centers, but here again, the data belies popular conjecture: In a 2015 survey of 341 US regions that did not include New York or Los Angeles, the nonprofit arts and culture industry directly produced $63.8 billion in spending, and generated an additional $102.5 billion in event-related expenditures (not including ticket sales) by their audiences.

There are approximately 748,000 artists living in New York and Los Angeles combined; another 1,752,000 artists live in other places. Expressed as percentages, this means that only 29.9% live in two cities and 70.1% live elsewhere — a situation that the National Endowment for the Arts drily summarizes by noting “artists cluster in a diverse array of towns and cities.”2 In the last few years, I’ve spoken with artists in cities like Portland, Seattle, Cleveland, and Cincinnati — and for this issue of the Open Space magazine, with art workers in Bellingham, Tacoma, Pendleton, Eugene, and Sacramento — about why and how they live where they do. Throughout these conversations, I’ve heard variations on the same narrative: that by choosing to live in smaller cities and rural areas, these artists are intentionally privileging a day-to-day existence that allows them to focus primarily on creative work, which they’ve been able to achieve through the ancillary benefits of lower costs of living, family-provided childcare, the stability of owning their homes, and even having multiple studio spaces.

But in all things there are trade-offs, and the benefits these artists enjoy often come with a commensurate set of anxieties about visibility. The artists in these cities rarely (or never) see regional endeavors represented in the pages of brand-name arts magazines — an absence that leads them to conclude, not unreasonably, that whatever is happening locally is of no interest to the broader industry. Before the pandemic, many artists in my acquaintance made periodic pilgrimages to art epicenters to look at exhibitions and find venues for presenting their work, because they didn’t want to be disconnected from potential opportunities. One artist who moved from New York to Cleveland told me, “I’ve had conversations with my friends [back in New York], and they’re like, ‘The fact that you can even conceive of owning your own home and studio space, the fact that you could even conceive of starting a manufacturing business, is not something that I can conceive of.’ They say, ‘I have a studio in Brooklyn, I’m lucky.’ And I’m like, ‘You are! You have people going through your studio who will never see anything that I make.’”

Being seen is important. All art is oriented toward a social horizon, and regards relations held in common, helping us approach an understanding of the world. If we accept this basic premise, then artists are our greatest connectors, and it’s no wonder that they require a balance between the self-determination to live where they can focus on their creativity and the reassurance of being seen and heard — accepted and known — by communities with both real and symbolic power. And the need to be validated is intensified by our current circumstance, a time defined by fear, uncertainty, and distance. Entrepreneur Paloma Medina has written about the importance of six core professional and personal needs, including status and belonging. In the category of belonging, she lists community well-being and connection as central: that “people are cared for, [there is] kinship and mutual understanding.” Lately I’ve been thinking about the way that autonomy can interact with, or be balanced by, a sense of validation and belonging, and what might happen when artists develop their strongest networks in the place where they live. Would that investment lead to fulfillment, to obscurity, to both?

This line of inquiry easily extends to the dynamics of the entire arts ecosystem: Do patrons full-heartedly support the art scenes in which they live? What if collectors made a point of buying art produced in their home state? Are there ways in which large arts institutions might have a more meaningful exchange with the artists in their region? (I am acutely and painfully aware of the irony in asking these questions on a platform dedicated to local artists that is about to be shuttered by a major museum for non-budgetary reasons.) There are ways for everyone in an art scene to be more grounded where we are.

That’s not to downplay how challenging less-densely populated regions can sometimes be, nor deny that inequity and injustice exist in those places, too. No home is perfect; we don’t need to romanticize small art scenes in order to acknowledge their value. For this issue of the Open Space magazine, I asked artists to write about how their creative lives played out during the last year — to approach it as a subjective field report, providing a snapshot of the current moment in the art ecosystem(s) they occupy. Whether they felt rooted or transitory or something in between, each responded by engaging with essential topics that artists continually grapple with in the smaller cities of the Pacific Northwest: the emotional toll of isolation, confronting tokenism and racism in the arts, the tensions of gentrification — to say nothing of the hurdles of staying connected in a pandemic. But they also chronicle the deep satisfaction of working in service to their communities, the potential of focusing on the local to make lasting social change, optimism for future connections, and the pleasures and profundities of the everyday. They describe a sense of circulating in a different direction, how their changing patterns of movement have resulted in new views of familiar places.

The upheaval of the pandemic has generated a new map for familiar territory, forcing navigation by other means, finding new routes to the same places, making us more aware of connection because we’ve been thwarted from having it. It seems that by reevaluating the literal and metaphorical spaces of connection, communication, and communion, we orient ourselves toward the places we want to go, whether that means setting out for an unfamiliar terrain or making a new home within one we already know.

All places have power. A small star on a map; a clear orientation to the extant, surrounding terrain; the sense of feeling among kin: I make a small prayer of this for myself and for all artists, everywhere.