all around the world statues crumble for me

There is a patch of paragüita morada/pasto borrego/paso conejo/chloris inflata that grows on the roof of my childhood home in Carolina, Puerto Rico. My parents are usually meticulous about this sort of thing but this little patch of wildness is left unbothered. It’s not like you can miss it; one looks up at it from the rocky floor of the pool deck below, undulating wave-like in the breeze.

I started writing this in my teenage bed in Carolina. A municipality demarcated by the Río Canovanillas, the Río Grande de Loíza, La Torrecilla, and the Piñones Lagoon, the ancestral home of Roberto Clemente (whose birthday it is today) and Julia de Burgos. Carolina is one of seventy-eight municipalities within a colony that seems continuously between collapse and rebirth. I am also working these thoughts out from within an online platform itself within an institution in the first part of that cycle. The body, the institution slowly eating parts of itself to satisfy the whims of capital, moved by the strange calculus through which money is squirreled away and released using art objects as cover. All of this nested within an interminable pandemic. A picture of collapse expands in concentric circles before us from almost all points. Our end is not the end — the end is always happening somewhere — but we are at such a somewhere, many times overlaid.

AN INTERMISSION I DIDN’T WANT TO WRITE BUT WHICH FEELS NECESSARY AND WHICH IS ANNOYINGLY LONG. AS A HUMAN AND ARTIST I AM LOOKING ELSEWHERE FOR ANSWERS.

When last spring Claudia asked if I would like to take up residency at Open Space, I asked her out for a walk. We meandered in the border between Oakland, Emeryville, Berkeley, discussing where the museum was after the very public fallout following its own contribution to the nation-wide institutional wave of performative “observance” of the continued violence and pain experienced by Black peoples in this country, set off most recently by the murder of George Floyd and its attendant uprisings. I was, am, wary of lending my own AfroIndigenous voice and personhood as a shield for a (continuing) very public and harmful messiness. I (like so many) feel, felt, that even without the aforementioned behavior, the museum had become an institution with little memory for its triumphs (RIP performance and film programs, long-live the media arts program) and a place that had taken few meaningful risks in an age.

Beyond my refusal to take (un)friendly fire, of late, I’ve not felt like institutional reform of this ilk is worthy of our glorious energy. The police can’t be reformed and neither can institutions that tend the garden of class stratification.

Yet I did (do) believe that Open Space is one of the things the museum does (did) right, so I asked for more time to think of something that let me be intentional in my participation, even if it would be in the outer rim of the museum’s galaxy. I agreed I would participate in the fall (now) and roughly share in some of the research around Black and Indigenous revolt I’d been developing towards a new body of work (in progress).

And then July came and the museum decided to cut off the remaining access points to its corpus for emerging, unknown, freaky, anti-establishment, experimental artists in the Bay Area. Shuttering the Artists Gallery (lending local artists who wish to sell work an interface with interested buyers since 1946); terminating its illustrious film program (the first in the nation, established in 1937); and Open Space, this very online platform which, since 2008, has ushered forth myriad thoughtful, strange, and smart projects ranging from text to image to video and beyond. I would be (am) in the very last cohort to produce content for Open Space.

It didn’t then feel reasonable to press on with my idea, as though the house fire that’s been slowly consuming the place wasn’t now a fully out of control forest inferno. And so, that is how in ways anew I find myself on my too-small childhood bed thinking and writing about collapse.

Here is an excerpt from “Canto a la muerte”/”Song for Death” as found in the book obra poética II by Evaristo Ribera Chevremont (who is probably problematic; hard to find receipts on a dude born in 1890) which I found in a house in Dorado. I transcribed it and translated it overlooking the tiny waves at Punta Fraile, hurriedly because it was getting too hot to type outside any longer. A translator once told me it is harder for people natively fluent in a language to translate it:

…You are with me

You are in my blood,

the mirror you regard yourself in.

You are in me…

I warn you that in me I have a strength to match yours, Death.

in the slip/space/leak between time.

And I won’t let you go, Death. In your ear

I place the word

That only I know

My voice is for your ear

My voice! Doesn’t it shake you, my voice?

My voice says, “Death, life could be,

through you, glossiness and grace!”

My voice says, “Death, life could be,

through you, the shape of plenty/abundance!”

that which is laid out by my voice.

Because my voice, Death, is the voice in charge

of you. Because my voice

[this is where I came in because it was too hot]

And my song is for you.

with the song that I am.

My song is not of death, Death.

My song is not of woe/shame.

My song is not of tears/weeping.

My song is song

of affirmation of self.

My voice speaks to you, Death, the song you’re waiting for.

There’s a Cheo Feliciano song found amongst my Abuelo Cuco’s record collection that I used in a video once. He is describing a rainstorm, in what I always imagine to be a conversation held under an awning while waiting for the downpour to stop. Ponte un sombrero, busca una tapa, que del agua nadie se escapa. Put on a hat, cover yourself because no one escapes the rain. He goes on: Pero hablando sin pensar, Que no se puede dañar, lo que nunca ha sido bueno. But speaking without thinking: you can’t mess up that which was never good to begin with. 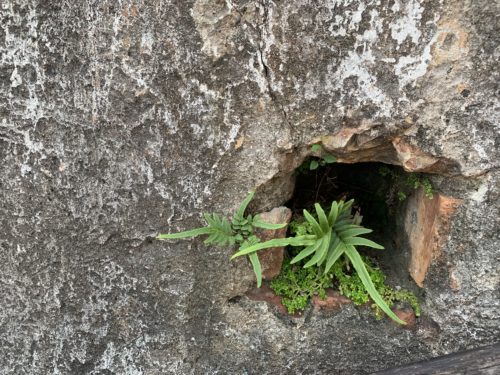