The battle between wanting to be social vs. comfort in being alone, wanting to fit in vs. misanthropy; that age where you decide if you should go outside and do what your peers are doing or stay in and work on an introspective, time-consuming craft.

My parents had a couple friends but not many, or they kept them at bay. A pool table in the house meant occasional small gatherings in our home, not having to worry about how much they drank. But these were few and far between. I would wake up and complain about the noise, yet ultimately I adopted their tendency toward staying in. I say “tendency” because there was still that battle. I spent a lot of time in my room drawing, writing lyrics, figuring out music. Of course I went through puberty and got curious about girls and parties and what older kids were doing. I’d stick my foot into that world only to see loss of control, fist fights, danger. I went back into my room. 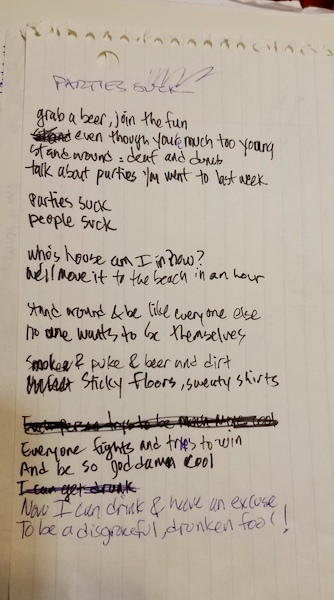 poem by Trevor Dunn circa 1985 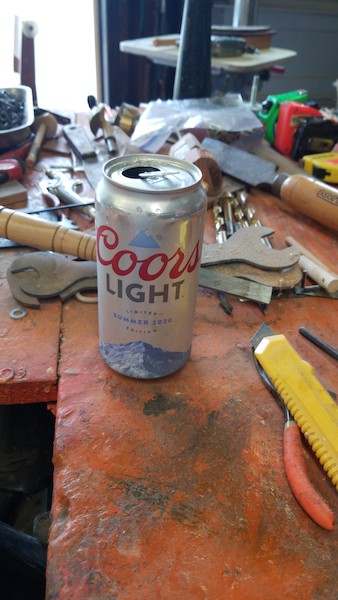 I drank my dad’s last Coors Light while he was in the hospital and we thought he might be coming home. I was out in the garage cleaning up, vacuuming sawdust, collecting tape measures, putting screw drivers in their allotted drawers. I could just hear him saying, “Where the hell is everything?!” upon his return. I was planning on replacing the beer and I was planning on hearing him say that.

The garage was never used for its intended purpose, unless you consider his drag racing years when it was essentially an auto body shop. The family cars sat in the driveway or on the curb. Once I was born the treachery of high-speed racing was left aside, replaced by table saws, jig saws, lathes, and drills. As a youngster I was fascinated. Occasionally I was granted permission to “monkey around” with a box of bolts and galvanized elbow joints. Dad taught me how to properly hit a nail on the head and how to hold a blade. So many manly tools. Bicycles parked next to the shop vac. I was also fascinated, along with my school mates, with the pictures on the wall: mostly ‘50s and ’60s centerfolds tacked high above all the serious gear. Very tame erotica, but each with a personality I conjured prepubescently and beyond. This was the space where I would hear my dad cursing as he worked. “Goddamnit.” “Sonofabitch.” Sacred words I wasn’t allowed to say. The space where I was disciplined several times. My first dogs slept and eventually died out there, in their padded house under a heat lamp. The garage was where you went if you had to talk to dad, to ask for money or permission; mom’s realm was the kitchen, and both had orders to stay out of the other’s space.

Word has it that my mom put up with a lot. I never really thought about her having to “put up” with a wall full of nudie pictures — not until she was taking them down a few days after dad passed. “Mom, what the hell are you doing?” I politely queried, “That’s part of my youth!” She scoffed, “These old things? The paper is just crumbling.” And it was. That garage was a fire hazard, lots of paint thinner, oil, rags, wood chips. He freaked out when he found a spent match in there once, made a cardboard sign with the match glued to it that said something about corporal punishment if he ever found another. The place was an inch-thick in sawdust — down in the machinery, up on the florescent lights, coating the jerry-rigged electrical outlets — not to mention fifty-year-old, flammable nudie pictures.

I decided to let them go. This is mom’s house now, her garage: she gets to decide what she wants to do, how she wants to deal. “I told these bitches they were gonna go someday,” she hissed, “and they’re gonna go!” 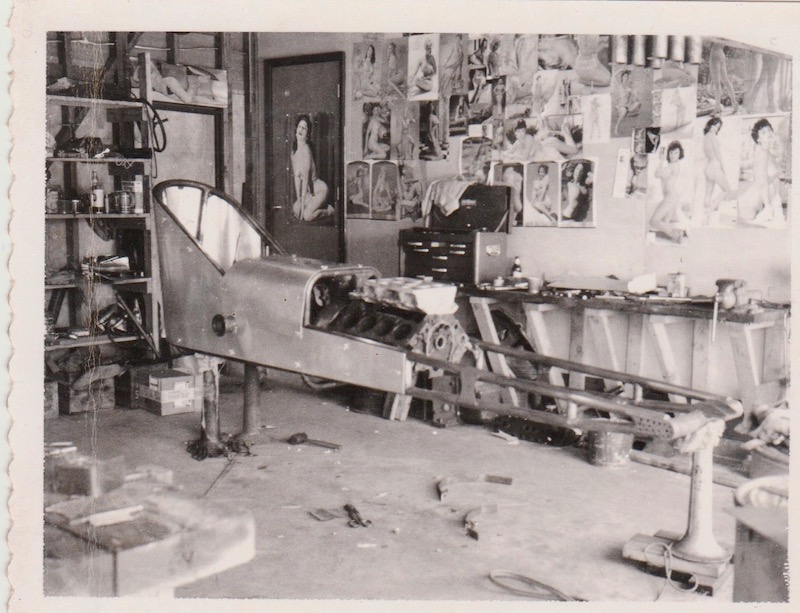 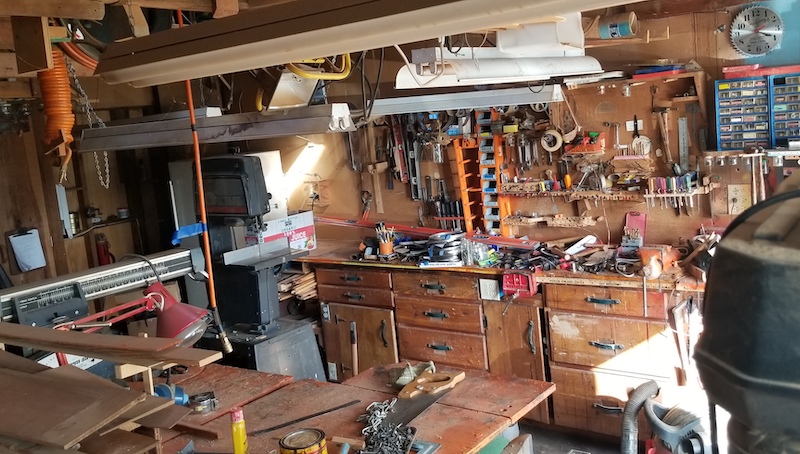 Meditation wasn’t something I ever considered growing up. I’m sure it must have been around, what with all the naked hippies I would see at the river, the mushroom trips I’d hear about, the locally made jewelry and the tofu. Living on the blue-collar side of the tracks meant leanings toward other things: chopping firewood, classic rock in smoky bars, meat and potatoes, vodka, car races, power tools. My dad built things with his hands, not unlike some hippies. There was art in his mind, but I think he would roll his eyes at the idea of attempting to think about nothing. I could be wrong about that.

We had a jacuzzi in the backyard for about ten years. As a teenager, many nights were spent under the cold, clear sky, soaking alone, staring up at the constellations while contemplating the future and time and the meaning of life. This was some kind of meditation. Decisions were made in that heat. Reflection. Analysis of problems and fears in a bubbling cauldron, surrounded by the aroma of redwoods and dewy Douglass fir. Smoke from a neighbor’s fireplace. At some point the thing became a hassle and my parents ripped it out. Dad built a partition for the wood pile and a suspended bench; mom hung a wind chime and planted a tree in the new dirt octagon where the tub had been.

I’m sure neither of them ever imagined, nor did I, that some three decades later, after a tumultuous beginning to the year, I would retrieve my meditation spot on that East-facing bench. There’s a bird bath, a twenty-year-old amaryllis, robins and crows in the morning, the quiet drone of small-town traffic off in the distance. The same open sky beckoning my inquiries. A lot has changed and little has changed.

Probably not too far off the mark to assume that any adolescent boy in an impoverished, culturally challenged, and isolated small town might eventually turn to trespassing, vandalism, and/or pyromania. Homemade “bombs” were a thing. Some kid in junior high died from a piece of shrapnel in the throat. My fatherless friend Jack and I lit several things on fire: his garage floor, a forest grove, plastic toys on the roof of the elementary school. I was always the first to volunteer to strike the match for the fireplace.

There is hallowed ground behind my parents’ house: a half acre of open field, home to an abandoned well and what we simply called “the stump,” a six-foot gutted out tree trunk of some unknown species standing alone, inviting us to climb up into its throne. The field was big enough for my older brother to design a baseball diamond where we’d play league games with a mishmash of neighborhood kids. The well was right around pitcher’s mound and the stump was way out in left field, not far from the backyard fence my dad built using scraps from the lumber mill where he worked. By the end of spring the hay would have grown above our heads, good for hiding. And then that glorious day would arrive when someone would mow the field. We anticipated this as we did the end of the school year; immediately we would hop the fence and start building mounds of hay at the base of the stump. A once-in-a-season event. Four-foot drop to the pit. My hay fever went wild. The jump was worth it.

One day I climbed up into the throne with a box of matches, lit several, snubbed them out in the peat moss where I sat. Went about my day. A few hours later the neighborhood was in a ruckus, old folks hopping their fences with buckets of water to douse the fire that had begun to threaten us all. I kept my mouth shut until about twenty years later when I confessed over Thanksgiving dinner. I took the berating with aplomb, assured in the statute of limitations. A few years later the stump birthed blackberry bushes which were harvested for pie: absolved.

This field is a sole survivor; previous adjacent fields, horse pastures, and apple trees have fallen. I always detested this development. I wrote a high school paper about being scowled at by one of these new neighbors, how I reveled in the fact that I used to piss under an apple tree where his front porch now stood.

Recently, after more than sixty years’ ownership of that consecrated field, the landlord passed and the tractors moved in. These might be the last photos ever taken of the vine-covered stump.

At seventeen my professional career began when I joined a grizzled bar band and was thrown into a demographic previously unknown. Because of my age I always had to sit in the kitchen between sets or go outside, where I would do homework in my car. The first New Year’s Eve gig revealed a crowd of adults, with nothing better to do, at their worst: loud rednecks, cigarette smoke, belligerence, lasciviousness, sadness. I recalled my poem about my high school peers but somehow this was the real deal. Lots of fodder for my sociology papers and fulfilling my desire to turn observations into lyrics. Occasionally I would take a Walkman down to the gig to record not the music but the interactions of adult inebriates who must have found my sober baby-face an innocuous curiosity.

Toward my final days in college the call to move to the big city started to drown out the din of smokey saloons. My last months in Humboldt I was hardly playing in town at all, instead spending more and more time in the Bay Area. But when home, after all my friends had moved away and I was a newly unemployed college graduate, I would ride my bicycle downtown with my Walkman. There was no longer anything for me to do in this town other than work in my room or study the village nightlife I was so close to leaving. It didn’t matter that I was finally old enough to go into the bars; I had no reason to. I’d stand outside, engrossed in the lively small-town pastimes of making up problems, getting lost, and wasting away. Inevitably someone would start a conversation or ask for a cigarette. There’d be a fight or a gaggle of over-sized trucks. If the freight train was passing through I might run a few blocks to hop it across town or at the very least record its ominous, metallic noise. Plenty of noise for such a little town.

Before 2 a.m., when things really got out-of-hand and traffic went drunkenly haywire, I’d head back to my parents’ house. The further I got from downtown the more barren the streets became until it was just me and the wind, a creaking street sign, a barking dog, a shadowy figure in his alleyway. Dad didn’t get home from his night shift until 4 and mom was already asleep, so I had a couple hours to myself again. Perhaps some Kung-Fu theater on television, or a few minutes in the hot tub. More likely, I’d scrawl down some thoughts in my room, wondering where all these people, myself included, were going to end up. 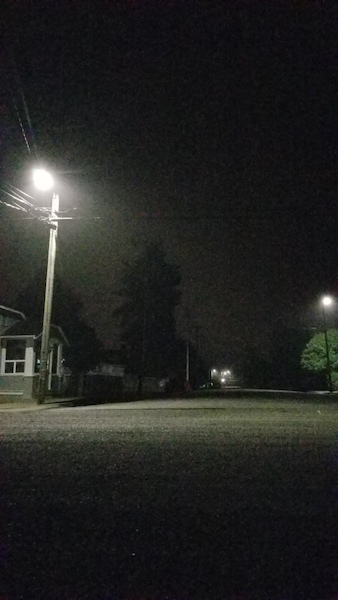 night view from my parents’ house