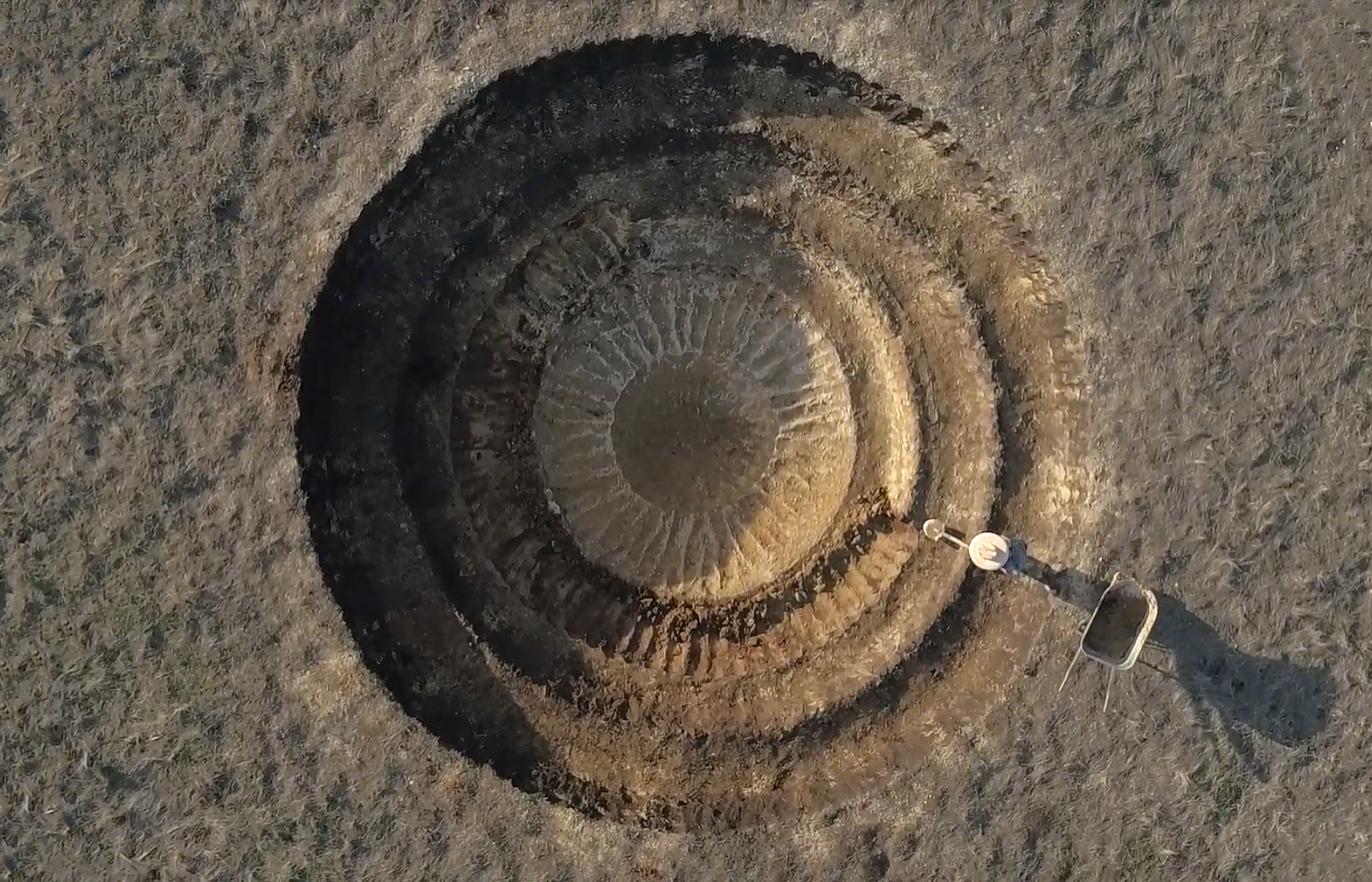 All photos courtesy of Jemila MacEwan and Campbell Watson.

Pacific wind combs through the grasses, feathering them against the earth. I am on the crust of California’s coast in a field circumferenced by pines, looking for the impact crater of a meteorite. The dried growth makes hushing sounds as I walk through the clearing. Close to the perimeter of the field, I notice a shadow of dirt, like a black marker darkening a small patch of the horizon line. I’ve seen pictures of the meteorite’s mark in the ground and anticipate it will be “big,” whatever that means; as with many phenomena of this size, it’s hard to know just what that largeness will feel like when my body is alongside or within it.

It took me and my girlfriend more than three hours to get from San Francisco to the small town of Point Arena, the sun slanting off the ocean into our eyes, making the car glow nearly the whole way as we slowly traced the coastline along Route 1 in a turquoise rental car from a company called Rent-A-Wreck. This stretch of coast is the land of the Pomo. In 2018, what is now also Mendocino was ravaged by the largest wildfire in the history of the state. As its name suggests, Point Arena is a tip of land nudging out into the ocean; it rests directly along the San Andreas Fault and just south of the Mendocino Fracture Zone, also called the Triple Junction, where the Gorda, Pacific, and North American plates join. It is the cusp of the continent. 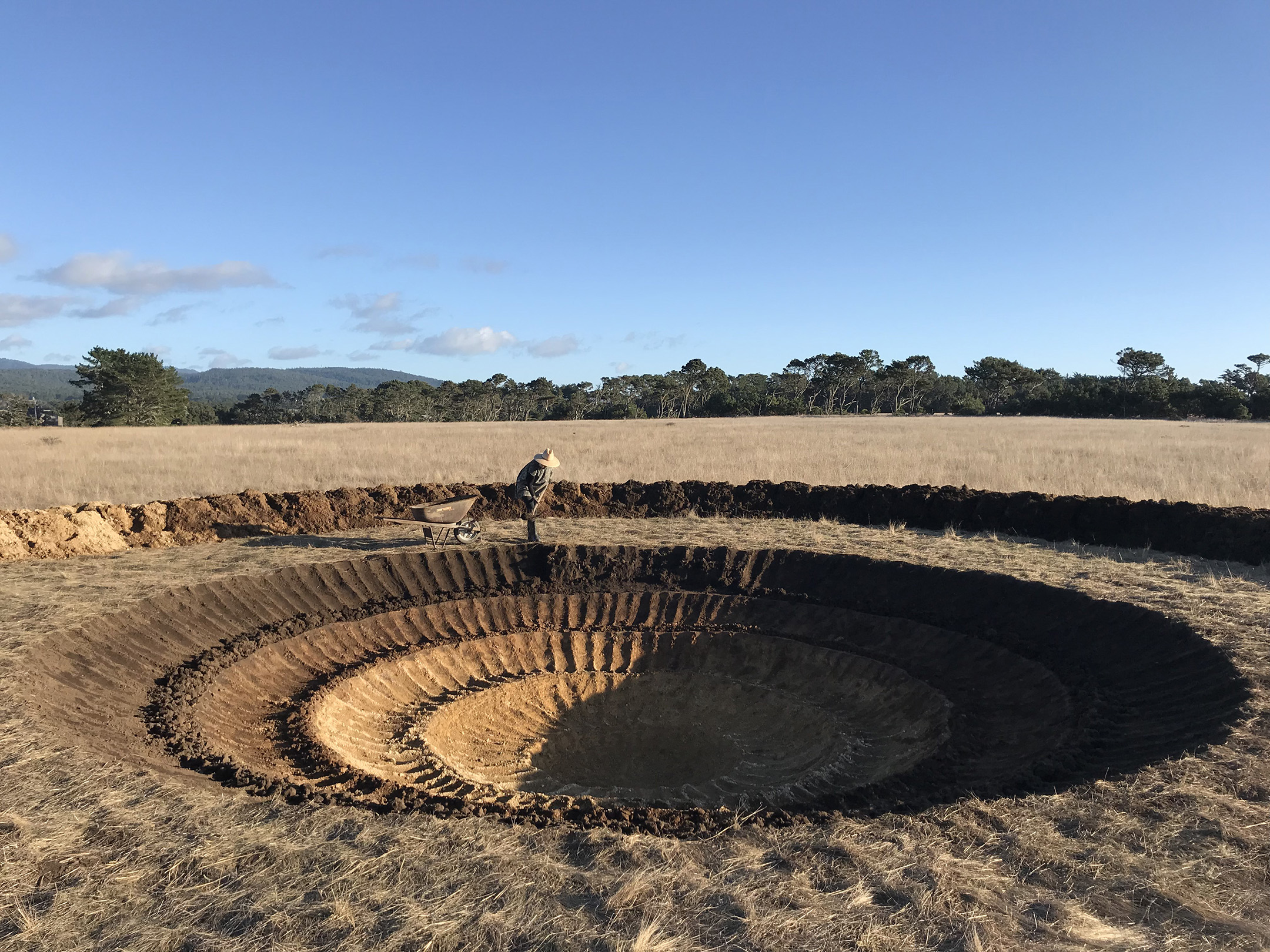 In the photos, the impact crater resembles Incan agricultural terraces, steps descending concentrically into the ground. I track towards the smudge: tiers of earth ripple outwards, and I’m struck by how the physical size connects me to a sense of geologic time. Yet this impact crater was not made by a celestial body that pierced our atmosphere long ago, rupturing the planet’s surface. It was made by a human body, that of Australian artist Jemila MacEwan. In 2017, working for thirty days using only a wheelbarrow, shovel, and mattock, she dug into this meadow in Point Arena, while she was an artist in residence at This Will Take Time. MacEwan conceptualized the piece as an endurance performance, framed by both the lunar and solar cycles. She gave herself parameters: she would work within the limits of the day to excavate a crater that was roughly modeled on a meteor the same weight as her own body hitting the Earth. She began when the moon was full, and once it was full again she had excavated an inner ring forty-two feet in diameter with an outer ring of displaced earth seventy-two feet in diameter. At its deepest, the crater is six feet. 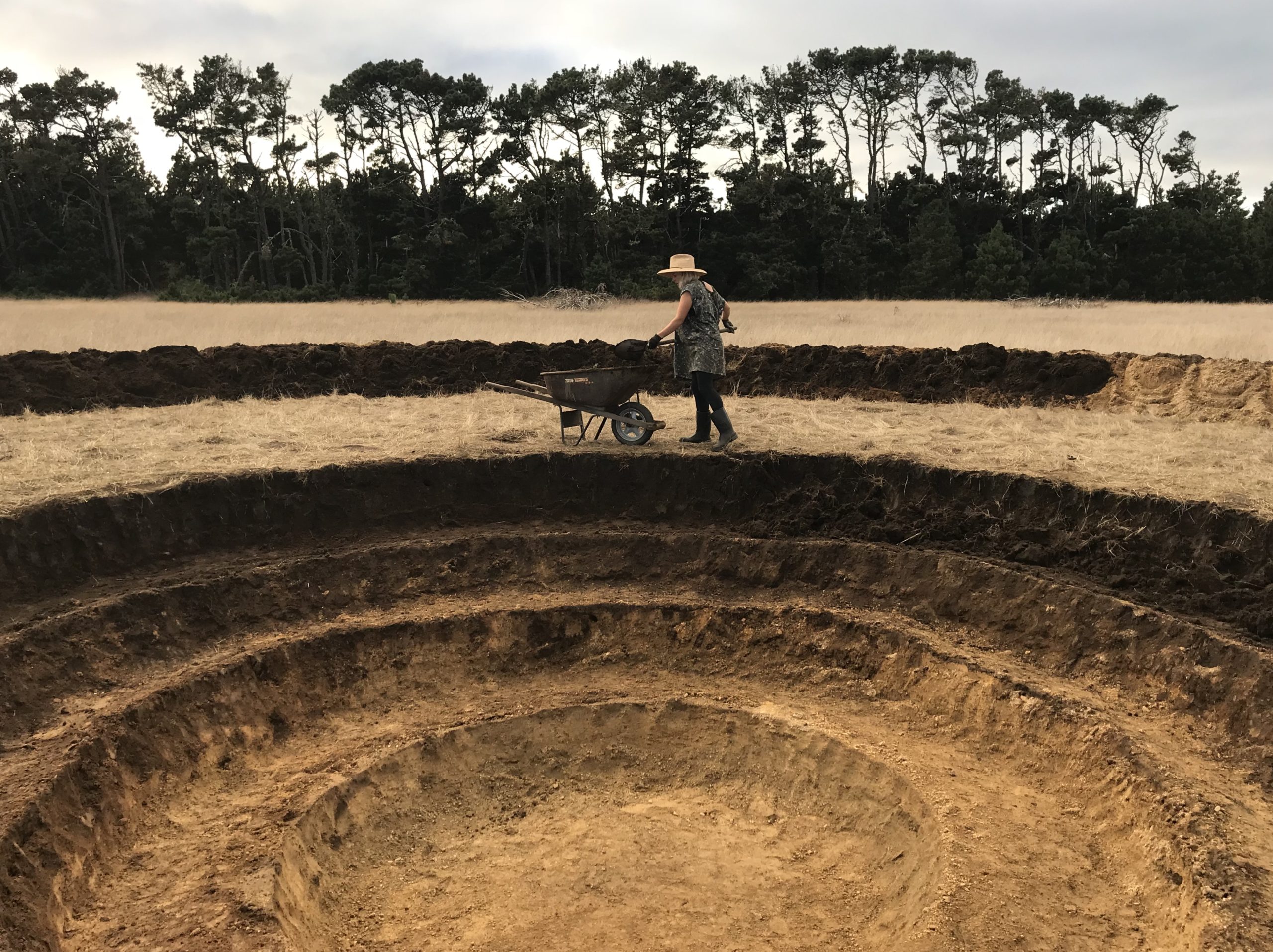 MacEwan had spent the previous month doing intensive strength training to prepare for the physical task of daily digging, and even so, before she left New York City for the West Coast, her trainer told her that she wasn’t ready. When I started interviewing her several weeks after Human Meteorite was completed, her body was still aching, her forearms damaged from lifting so much soil; she would be in pain for months to follow. During that first studio visit, I called the piece an earthwork, and she later told me that she thought of it so deeply as a durational performance that she hadn’t considered the ways in which the impact crater that remains is in conversation with land art. Much like Walter De Maria’s The Lightning Field and Nancy Holt’s Sun Tunnels, MacEwan’s work gestures upward while anchoring the viewer in the earthly plane. So too, it evokes the volcanic basin James Turrell’s Roden Crater is nestled within. But just as telling are the differences between Human Meteorite and the often masculine assertions of this canon, where many artists have relied on machines to do the heavy lifting. For example, Michael Heizer’s Double Negative is two simple cuts in a mesa, rock and sand subtracted with bulldozers and dynamite. When I visited in the spring 2018, it felt empty of meaning: walls of stone crumbling into a trench, a strangely minimalist demonstration of man’s power. MacEwan refused to displace this labor away from her own body, and while nearly all earthworks must reconcile with colonialist critique, there is a paradoxical level of care for the Earth within the performance of Human Meteorite, even as it wrestles with and acknowledges humanity as a destructive force.

I can’t help but return to Francis Alÿs’ allegorical performance When Faith Moves Mountains, for which he gathered five hundred volunteers to shift the edge of a dune in Peru several inches, using only shovels. This collective gesture critiqued the inaction of a corrupt government, just as MacEwan critiques the reluctance globally to take drastic measures to protect the planet from the inexorable destruction wrought by humans. “In considering how the impact of a real meteor is a force that transforms the surface of the earth instantly, I imagine myself as having the same potential energy,” she says in her artist statement. “Working routinely and gradually by hand, I will create the same outcome as the sudden violent act of a celestial meteor impact — reframing the catastrophe as a slow action.”

MacEwan is the daughter of a soil scientist, and her partner Campbell Watson is a meteorologist; she has always been surrounded by people attentive to various nuances of the Earth, whether in the layers of rocks, or in the clouds and atmosphere, and her art reflects these complexities. In the last five years, MacEwan has made ceramic sculptures of volcanos and acoustic earthworks; she is now at work on a sculpture called Dead Gods, a monument to fungi several stories tall that used to be on the surface of the Earth. In The Wake, filmed during a residency in Iceland, MacEwan hauls massive sculptures of teeth around the shore of a glacier as a metaphor for her climate grief. After making this video, in which she was submerged in frigid water for hours on end, she went into a deep depression. Her work carries both anguish and reverence for the planet. 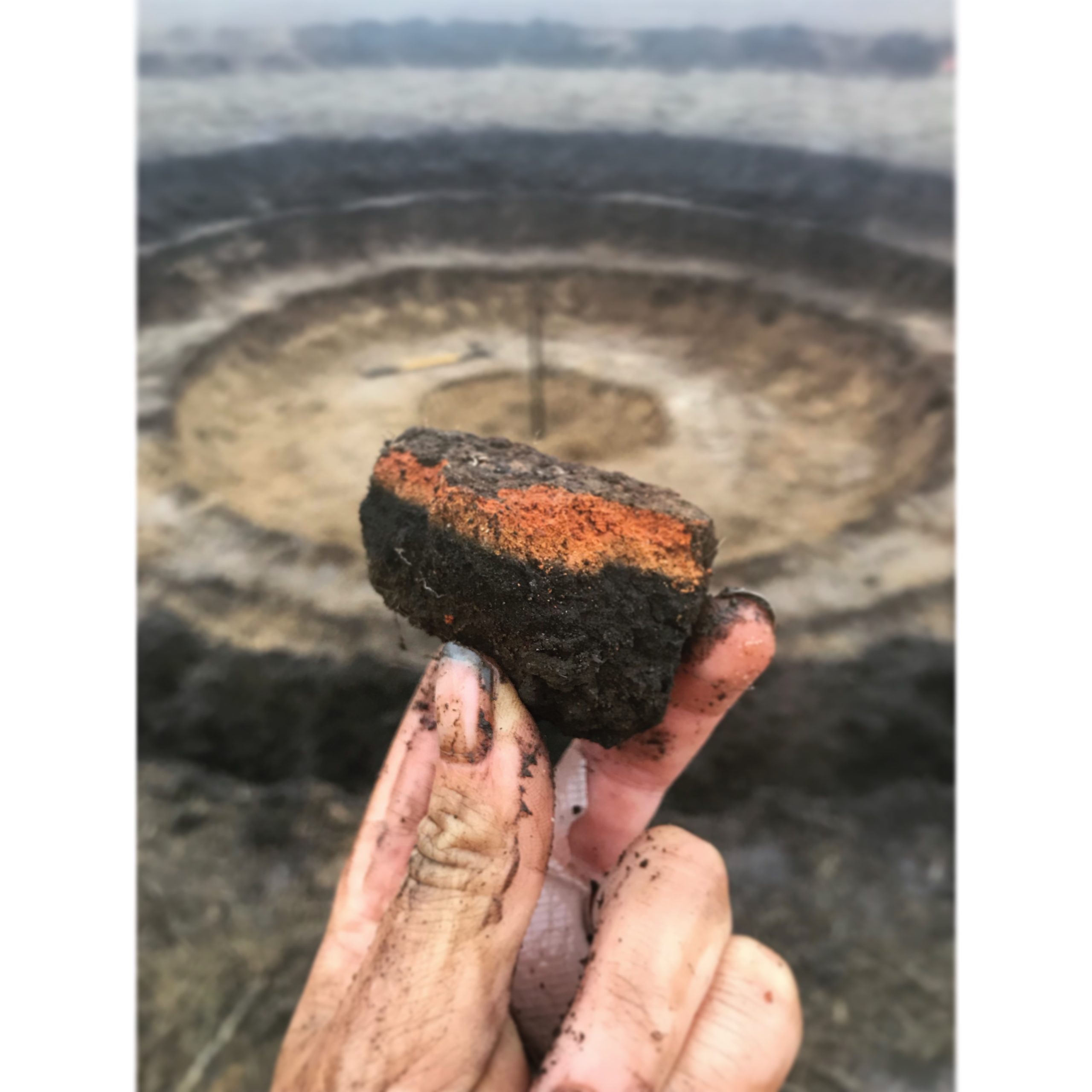 In the days MacEwan spent in the field in Point Arena, she became familiar with the worms, with the weight of soil after rain, with layers of different kinds of earth. Her actions were intimate, incremental, devotional, bringing to mind the embodied aspects of Ana Mendieta’s practice, such as when that artist ritualistically photographed herself in contact with the earth. There is a presence and humility evoked by ongoing intense physical tasks, like Tehching Hsieh punching a timecard hour after hour, or Emma Sulkowicz lugging a mattress to every class at Columbia. Repetition yields the transcendent, particularly when the scale of the work is a measurement of the body’s capacities and limits. Much of the potency and poignancy of Human Meteorite is illuminated by these bodily stakes: MacEwan was continually exposed, working to the point where her muscles seized up and she was in too much pain to sleep despite her exhaustion.

Each day on her way to the Human Meteorite excavation, she broadcast an update about her progress on social media, appearing in a wide hat and a uniform she made from fabric printed with an image of the cross-section of a meteorite from the Smithsonian. (The costume is a rare element of artifice in the work — and historically within the medium of performance uniforms are an essential marker of action, a way for the performer to step into their role.) The logs offer insight into the process, physically and emotionally; as she shaped the earth, she was reshaped internally. On the final morning, after watching a super moon fall below the horizon, her awe is palpable as she reflects, “to be complete, whole, and full is part of a cycle, not permanent.” Watching, I am reminded that the root of the words humility and humiliation is humus, or earth. 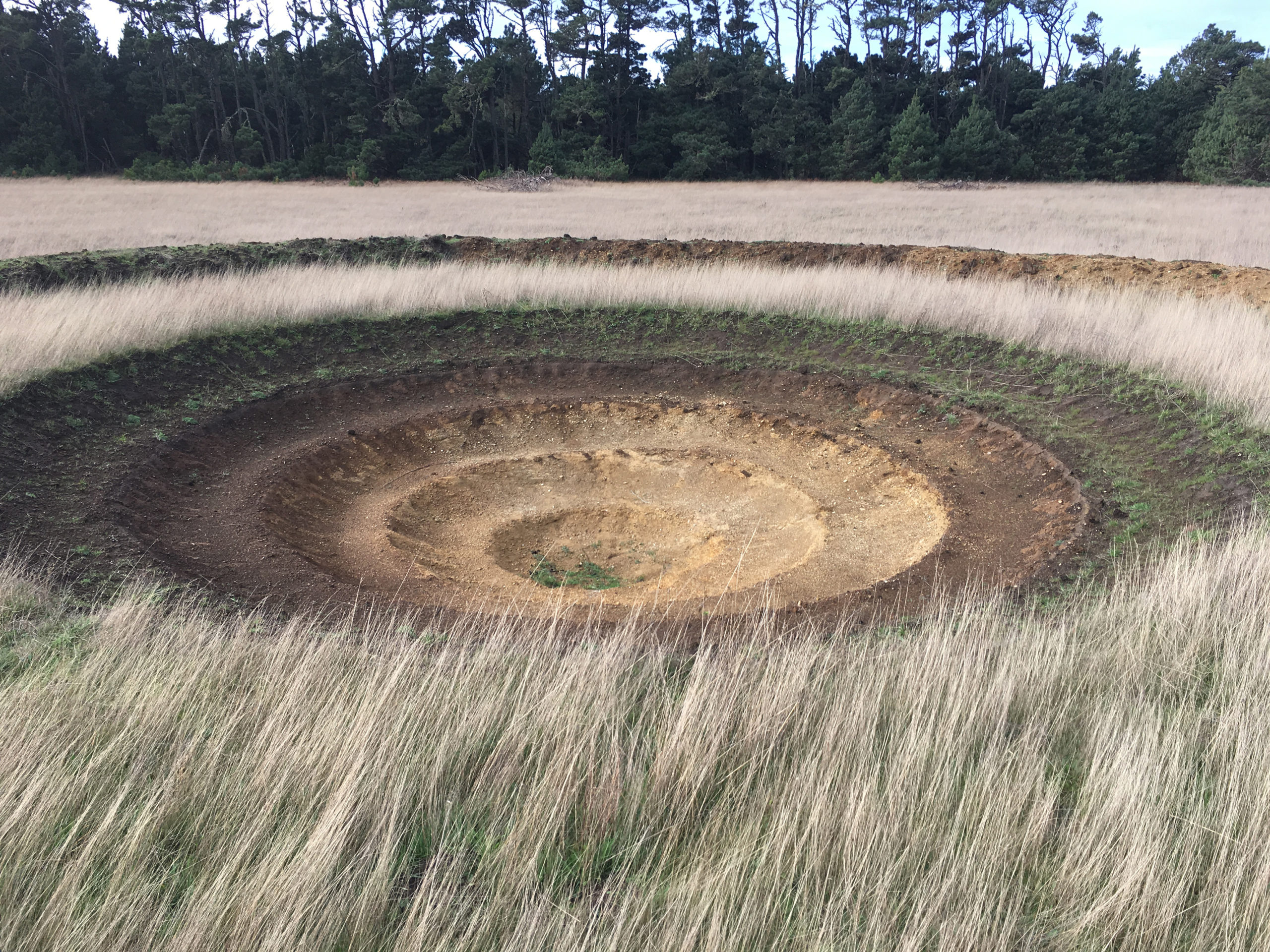 When I visited Human Meteorite this February, a little more than two years after the performance had finished, the crater was already being reabsorbed by the earth. In the navel, the lowest point in the center, the soil was darker and green tufts were sprouting up. Standing in that base, my eyes were just below the level of the Earth’s surface. The horizon disappeared: all I could see was the wash of sky and the canopy of trees at the perimeter of the field. Bird calls and the sound of saws revving on a nearby property sounded different held within the concavity. Six feet under, where we bury bodies. Six feet away, the distance we now keep between bodies.

Grasses had filled in the inner and outer rings, making the crater appear smaller. It was bittersweet to see the way the field was rapidly overcoming the work, yet strangely hopeful, evidence that the deeper and more treacherous marks of humanity will scar over. Eventually the earth will reclaim the land.