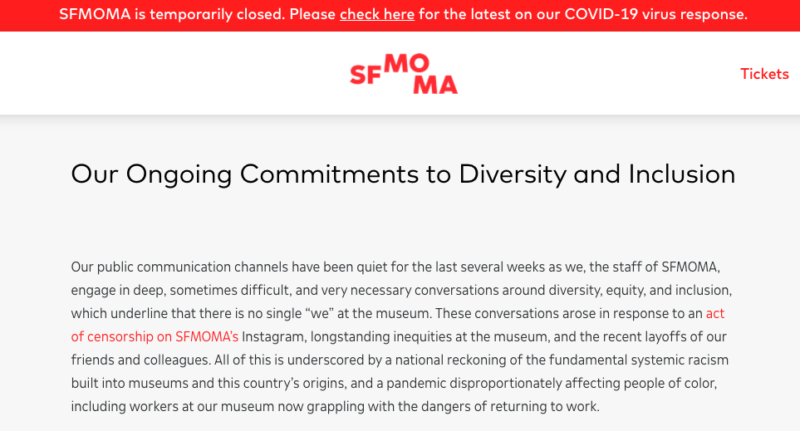 An initial staff attempt to summarize what it’s like to work at SFMOMA right now.

“It’s good in a way. Peel back the band aid and look at the rot.”

A friend wrote these words a few weeks ago as we were texting about our respective institutions’ self-inflicted public crises. They’ve been in my mind since, an important reminder that what’s new at SFMOMA (and myriad other organizations) is only the increased external visibility and clamor around inequities; the inequities themselves have long festered, protecting a few, doing harm to many, and creating the environment in which thoughtful verbal critique by a young Black woman could be framed by a large museum as a “threat.

I won’t go into detail around SFMOMA’s attempted silencing of Taylor Brandon; this disrespectful act toward a former colleague, and the ensuing fallout, has been chronicled in numerous publications, as well as by No Neutral Alliance, a collective that subsequently formed to hold the museum accountable for its actions. I am writing instead to explain why Open Space has been dormant, to tell you a bit about what SFMOMA workers have been doing behind the scenes, and to outline what I think will be Open Space’s next move. The “I think” is key here, for two reasons: first, the platform’s future feels entirely tenuous right now; and second, it’s important to emphasize that I speak only for myself.

OS stopped publishing on June 1, stating in a short post that “business as usual feels hollow, given the pain and rage our communities are experiencing in the wake of yet more unjust killings of Black people.” We had been scheduled that day to launch our summer magazine, an issue that had been written almost entirely before the murder of George Floyd and resulting protests. After reaching out to contributors to the magazine and other parts of Open Space, it was obvious that it would serve neither them nor our readers to publish their work as planned; we all had more pressing things to attend to.

The turmoil of this moment included layoffs at the museum — including Gordon Faylor, OS’s managing editor, who had worked at SFMOMA since 2014. It’s impossible to summarize everything he’s done to make Open Space what it is today; I miss his humor and his counsel.

As word of the layoffs and the museum’s treatment of Taylor spread within the local artist communities at the heart of Open Space, becoming part of a wider conversation around systemic inequities, I began reaching out to contributors who had pieces scheduled, to see how they would like to proceed. Almost everyone wanted to withhold their work, in solidarity with Taylor and SFMOMA workers, and in hopes of putting pressure on the museum to change its behavior.

I fully support this decision (contributors have been compensated in accordance with W.A.G.E. Certification standards, and are free to publish their pieces elsewhere). It’s incredibly heartening to see artists and arts workers demanding more from arts institutions — and to see their demands yield results. I also recognize that withholding work is complicated and painful for some individuals, particularly those whose positionality already renders their publishing a political act. A few have additionally asked whether silence is the most effective tool, or whether it precludes more meaningful action. I share this ambivalence, especially as the conversations I’ve had with contributors have been so rich and generative and thoughtful; given the role OS has played in the past as a forum for debate, might it not do the same here? At the same time, this platform is ultimately part of the larger institution, and benefits from the colonial endeavor that is an art museum; one person’s institutional critique is another’s fig leaf.

My conversations with concerned community members have been occurring in tandem with intense, messy conversations at the museum, in the form of debates with colleagues, marathon all-staff meetings, letters drafted collectively and individually, and interdepartmental work on the institution’s diversity action framework. I am continually impressed and moved by the efforts of my co-workers to create change; I am grateful to them, just as I am grateful to many former colleagues, for insisting that SFMOMA do better. And I am clear on two things: first, that SFMOMA workers have been pushing for change since long before I joined the museum in 2016; and second, that we would not now be making the gains we are making without Taylor Brandon’s campaign to hold the museum accountable for the harm it has done.

The things about which I am unclear are many. There is a lot of noise right now, inside the museum and out; it’s a strange thing to read press and social media accounts of supposedly closed-door meetings, to cheer on some paragraphs and mentally draft “corrections” for others. Overall it feels healthy and necessary, even as it’s exhausting and painful. Figuring out how to speak for oneself in the midst of all this, let alone reach consensus with others, is at once taxing and nourishing; as one example, I was part of the group of forty or so content producers within the museum who crafted this statement, with all-staff input, to try and give the public a sense of what is happening. The opening paragraph is the image you see at the top of this text.

I keep coming back to the institutional “we,” how awkward or even painful for many of us it is to be yoked to it. If, initially, silence felt like the least unseemly response, and one way for workers to mirror the external pressure being put on the museum, it increasingly feels that space is needed where a diversity of SFMOMA voices can be heard, whether to speak directly to what we are dealing with internally, or to focus on how their own individual artistic practices are unfolding in this singular time. I do not know whether Open Space will reemerge as a viable platform for the wider Bay Area artistic community; but I do believe that, right now, it can serve as one platform for the community that is my colleagues, fulfilling a core part of its mission to support diverse local voices. In the fall Open Space will resume publishing with a series of these posts; how many and with what regularity remains to be seen. As is the case with every Open Space commission, I am excited to see what these artists, writers, and arts workers plan to say and do.