Alcatraz Is an Idea 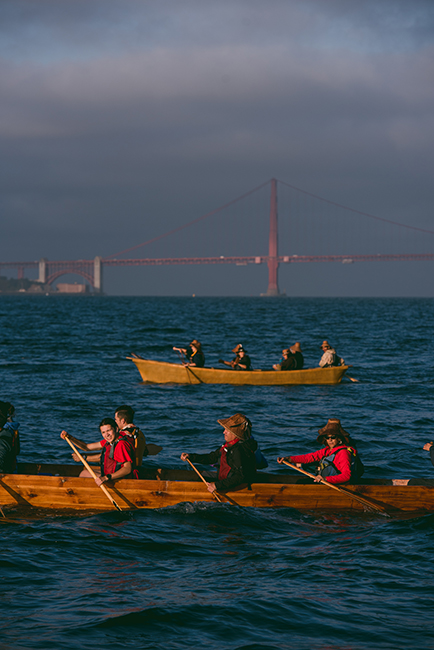 On October 14, 2019, Indigenous Peoples’ Day, eighteen canoes representing dozens of tribes, nations, and communities from as far north as the Klahoose First Nation in British Columbia and as far west as the Kanaka Maoli in Hawai’i took to the waters of San Francisco Bay, circling Alcatraz to reclaim the island as a symbol of Native rights. Photo: Marissa Leshnov.

On October 15, the day after eighteen Indigenous canoes paddled around Alcatraz to symbolically reclaim the former federal prison on behalf of Indians of All Tribes, a handful of canoe families — the Northern Quest from Chilliwack, the Three Sisters from Nooksack, the Muckleshoot and the Nisqually from Washington — returned to the island. In the central cell block, they gathered in a big circle. Eloy Martinez, a veteran of the Occupation and co-founder of the Alcatraz Canoe Journey, and my father, Ed NoiseCat, an artist and another co-founder, stood with them. The voyagers had brought rattles and songs. Now they launched into a deep and soulful tune — one that hails from their homelands along the Salish Sea. Sonorous voices reverberated off the prison walls.

Someone ignited a small bundle of dried sage, which the families passed around the circle, caressing their bodies with the smoke. They prayed for the occupiers and the spirits of the many ancestors and prisoners of war once caged here: Barncho and Sloluck of the Modoc; Natchez Winnemuca, Richard Dick, “Pete” (remembered only by his first name) and “Paiute Tom” of the Paiute; Kaetena of the Chiracahua Apache; Chief Skolaskin of the Colville; Aqawsi, Heevi’ima, Lomahongewma, Lomayawma, Lomayestiwa, Masatiwa, Nasingayniwa, Patupha, Piphongva, Polingyawma, Q’iwiso, Q’tsventiwa, Q’tsyawma, Sikyakeptiwa, Talagayniwa, Talasyawma, Yukiwma, Tawalestiwa and Tuvehoyiwma of the Hopi, whose only crime was resisting government efforts to take their children away to church-run boarding schools; and many others whose names are now lost to us. Some Ohlone say that Alcatraz is the place where the spirits go before crossing over to the next world. I like to think that, maybe, the song and the sage freed the shadows of Native prisoners still hidden on the island. Perhaps those songs that rang out so strong that day carried with them the voices of our forebears: the warriors and the occupiers. “Alcatraz is not an island,” said Richard Oakes, one of the leaders of the Indians of All Tribes. “It’s an idea.”

More than two years ago, Eloy and Dad dreamt up the idea that became the Alcatraz Canoe Journey in a cloud of another plant’s smoke (a story for another time). It was asinine: an all-volunteer crew, little more than a nuclear family, really — none of us water experts, none of us canoe journey organizers, none of us fundraisers — hosting a first-of-its kind gathering on the treacherous waters of San Francisco Bay. I didn’t believe it was possible. And there were more than a few times I lobbied the group to quit. But projects take on a momentum and inertia of their own. As October 14 approached, the asinine started to become an inevitability.

At the close of Hemingway’s The Old Man and the Sea, Santiago arrives back in his village exhausted, his body broken from a multi-day battle with an eighteen-foot Marlin, only to promise his apprentice Manolin that he will take him back out to fish the next day. Homer’s Odyssey concludes with Odysseus returning home to his wife Penelope ten years after the Trojan War. After killing Penelope’s suitors, reclaiming his throne, and taking his wife to bed, he tells his long-neglected partner that he is going to leave again. Powwow Highway, a 1989 cult classic about a group of Cheyenne Indians on an epic road trip from Lame Deer, Montana to Santa Fe, New Mexico to break a relative out of jail, ends with the heroes escaping a near-death car chase before getting back on the highway. A proper conclusion would, of course, ruin these stories. 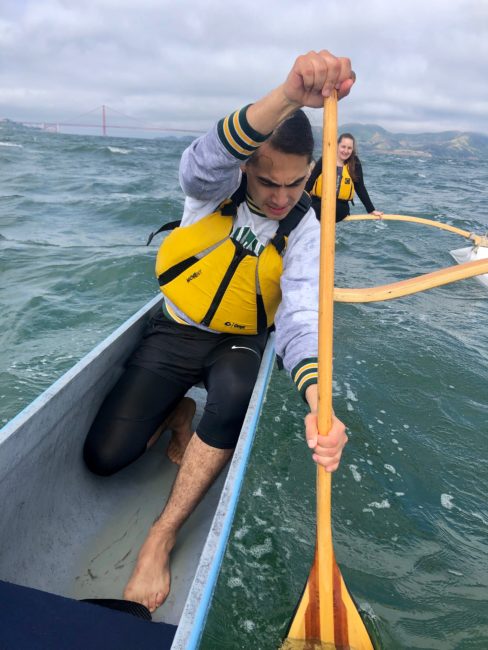 Julian Brave NoiseCat on a practice run in the waters around Alcatraz Island.

In life, as in art, things are left undone. When the canoe journey finally came to fruition, it read to most simply as a cultural celebration. But it was actually more of a direct action or performance art piece. The canoes and canoe families who responded to our call from far and wide became activated units of Indigenous power. In Oakland, urban Native youth who had never before been out on the Bay formed their own canoe family, built their own canoe, learned how to paddle, and participated in the journey. Antonio Moreno and Alfonso Ramirez assembled a tule canoe, paddled out to the island, waves nearly engulfing their tiny craft, and touched the rock. They were the only canoe to do so that day. When the canoes circled Alcatraz, a 1.4-million-visitor-per-year Federal Park, the island once again became a locus of Indigenous resistance, rather than the site of a former federal prison. The New York Times and many other media outlets, national and local, covered Alcatraz Canoe Journey, and through this magazine and our four-part speaker series, we educated the public about an essential and inspiring but often forgotten chapter of social justice history.

On November 20, the day that marks the fiftieth anniversary of the start of the Occupation, Eloy Martinez and other Occupation veterans like Dr. LaNada War Jack (a fellow guest editor of this magazine) repainted vivid red letters atop the United States Penitentiary sign that welcomes visitors as they step onto the island from the dock. That sign now reads, as it did fifty years ago:

OTHERS MUST KEEP OFF 200 YARDS

NO ONE ALLOWED ASHORE

I began as a reluctant organizer of Alcatraz Canoe Journey. But I now see that we have a responsibility to carry this thing further, and that our vision does not end in 2019. The journey can’t end, because the kids need to get back out on the water. The canoes should return to the Bay in future years — in greater numbers than before. And more people than just us Indians need to know that Alcatraz is not an island.