I’m not funny but my life is… 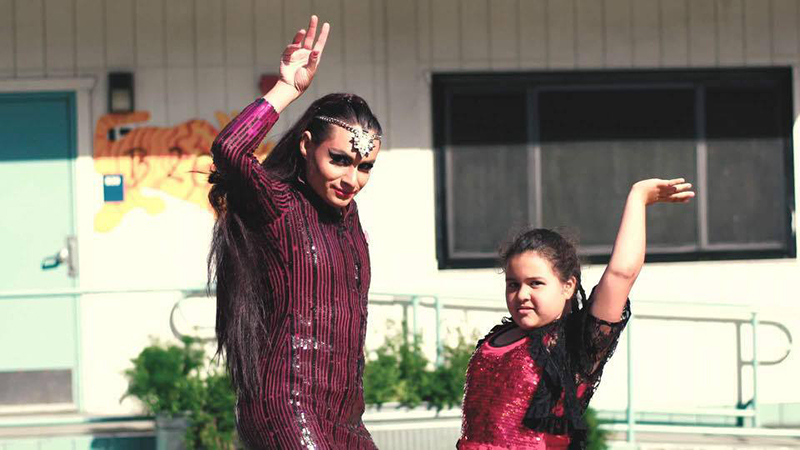 Yes, I am a drag queen who teaches at an after school arts program. Growing up, that was the last thing I would have thought I would be doing with my life — but now I wouldn’t change it for the world.

As a child, I had two fashion influences: my mom, a ’70s disco diva, and my dad, a mariachi lover. I remember noticing the elaborate production of “getting ready” on our visits to Mexico, during las Fiestas Patrias (Native Land Holidays). I would sit and watch my mother try on garment after garment while my father would sing songs, stopping only to make sure his mustache was perfect. My mother was never without her black pumps, and my father loved his charro (mariachi) shirt. When my mother finished putting together her look, she would run off to the bathroom to beat her face (drag lingo for “putting on makeup”), and I would slip on her heels and pose in front of the mirror, thinking about how glamorous I looked. When I heard her making her way back into the room, I made sure to replace the heels in their exact position before she could catch me.

You can see glimpses of both my parents in my personal style, but I’ve always had a soft spot for my mother’s high femme glamour — especially those heels. I love high heels; they give me a sense of power. Their height elevates me from six to almost seven feet tall, and they transform my posture, boosting my confidence. Though it’s challenging to find fashionable pumps in a petite size fourteen, I’m always in search of the highest heels and the biggest Mariachi hats. MARIACHI DISCO BABY! 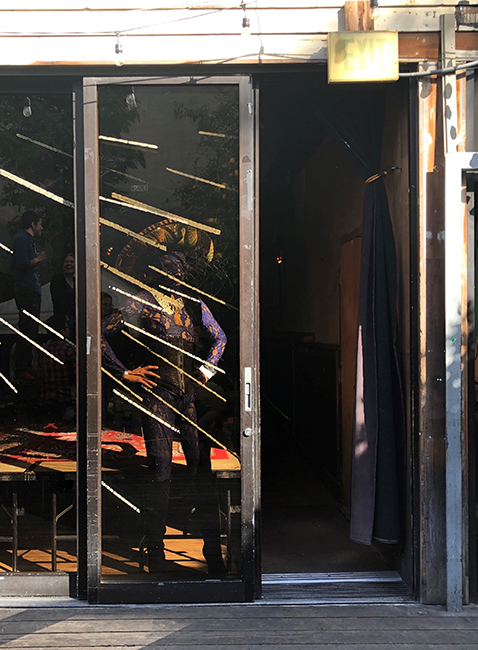 My parents also passed along their talent for making the cheapest clothing look chic.

Shopping with my mom meant visits to swap meets, J.C. Penney, and Sears. These were my mother’s Neiman Marcus. As she always said: “If you own it, you will look like a million bucks.” I still live by that quote, especially as a struggling artist and teacher. Juggling three jobs, long hours, and still making time to maintain the social life of a drag queen seems impossible — and sometimes it is — but I continue to work through it because I believe in what I do. I fell in love with San Francisco many years ago and wanted not only to thrive here but to contribute to the creative queer landscape. This is one of the most expensive cities in the world, but I am making it work with what I got. 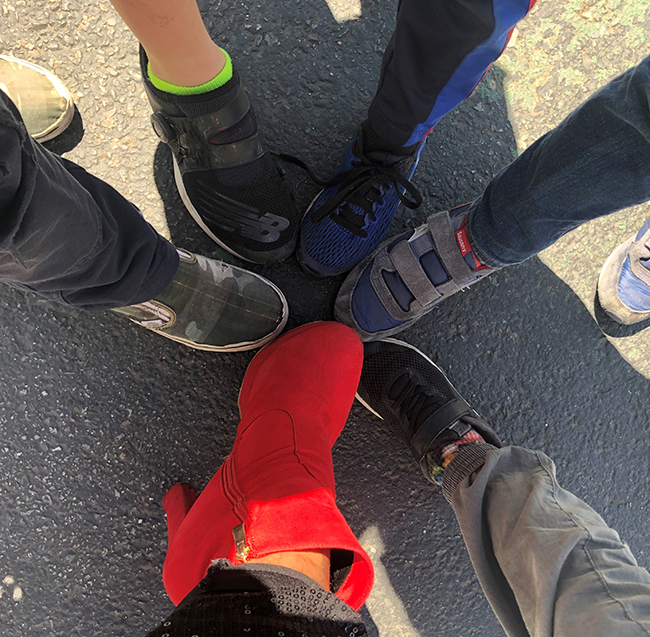 Despite these challenges, I’ve always been able to find a sense of hope. I see hope all over this city — from the cramped changing rooms I share with some of the most phenomenal performers that call this city home, to the opportunities I’ve had hosting the main stage at SF Pride — and I find hope in abundance when I’m with my children. They make me feel like the luckiest drag queen in the world. I began performing in drag ten years ago at a bar called Jet in the Castro. It was Latin night and I said I would try it as a joke. I was extremely nervous for my premiere: not only was it my first time performing, but I decided to make my own costume. I had never done that before, and I made it work with safety pins and fabric glue. It was magic — maybe not the shake-and-go wig or the $3 foundation, but wearing the eight-inch heels for the first time and being able to perform in them made me fall in love with drag. Drag allowed me to transcend, to become something bigger and more powerful than myself. From starring in a viral video about gentrification in SF called “Google, Google, Apps, Apps” to being asked to do the very first Drag Queen Story Hour in San Francisco — an event that is now international — I could have never imagined the things I would accomplish with my drag persona.

Shortly after starting drag, I began performing regularly at a bar in the Mission called Esta Noche, working every weekend for six consecutive years; it was my home. As the Mission began to rapidly gentrify, Esta Noche became the only queer Latinx bar in the city until, sadly, the space was sold in 2014. Over the course of my residency, I learned to accept the different sides of myself. At first, it was not easy to blend in with the other performers; I didn’t wear the pageant-like gowns and sky-high hair, which was the typical style among the queens at Esta Noche. I did, however, draw inspiration from traditional Mexican and other Latinx drag. I was able to create my own sense of style by combining my Mexican roots with US pop culture references. This personal mixture of worlds allowed me to pick and choose what inspired me from both cultures and use them in unexpected ways. I was able to play with clothes and defy gender roles and archetypes, paying respect to my drag elders at Esta Noche while having a style all my own.

Drag has allowed me to experiment in my day-to-day life, with clothes and make-up helping me convey a truer self. I’m not talking about designer clothes (well, sometimes I score at Goodwill. Who doesn’t love a bargain find? Jajaja!), but choosing pieces that make me feel comfortable, that make me feel like me. I’m gender non-conforming, and I want my clothes to reflect that. My fashion is also a form of resistance — walking down the street in “women’s clothes” is often not well-received because it challenges people’s views about what you are allowed and not allowed to wear. My favorite RuPaul quote is “We’re all born naked and the rest is drag.” This statement perfectly sums up my philosophy on self-expression and is something I talk to my students about. I tell them to wear what makes them comfortable and what makes them feel authentic. Clothes have no gender. 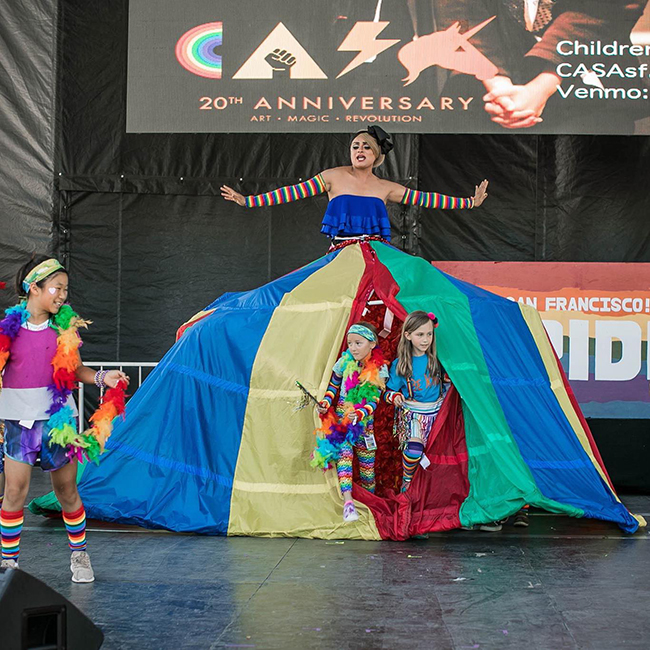 I started working at CASA (Children’s After School Arts) eight years ago. As head teacher of second grade, I teach classes that focus on social justice. One of my most memorable classes was a drag history class. The students were amazed; they were fascinated by the fact that their teacher is a drag queen. They asked lots of questions: Are you a boy or are you a girl? Why do you like wearing “girls’” clothes? Why are you so tall? But do you want to be called Socrates (my birth name) or Persia? What are your pronouns? Scared, I answered all the questions with the honesty they deserved. They took all that information, and after, to quote one of them: “Okay, I get it, you’re a drag queen! Can we go outside and play now?”

I’m in a unique position as an educator. I’m encouraged to be my true self around the children and in doing so, I’m giving them the tools to find out about their true selves. At the end of the day, all I want from my students is for them to be mindful and respectful human beings — and, of course, with a little sass on the side. Clothing is a highly personal way of communicating with the world around us. In the classroom, students are quick to question if I’m okay or if I’m sick based on what I’m wearing. If I show up to class without my favorite beret, or with fewer pieces of jewelry, they know something is up — and usually they are right. Witnessing how they understand clothing as non-verbal communication is partly why my job brings me so much joy. Having my students understand me and accept my drag and my non-binary gender has deeply affected me, and in some sense, has healed me. Listening to a kindergartner say to another kinder who was questioning my outfit, “Clothes are just clothes!” shows me that, at CASA, we are creating a space that allows students to feel free to be themselves. By wearing what gives me strength and beauty and talking about it with my children, I encourage them to do the same. When a fourth grader went on a costume jewelry shopping trip at Daiso, she donned many rings on each of her fingers and proclaimed excitedly, “Look! I’m Socrates!” — referring to the excessive but glamorous jewelry I wear every day. My students will beg to wear something I have on and run around the yard showing off their ensemble: “Look at my fancy shield!” “I’m so fancy!”

I truly am the luckiest queen in the world.