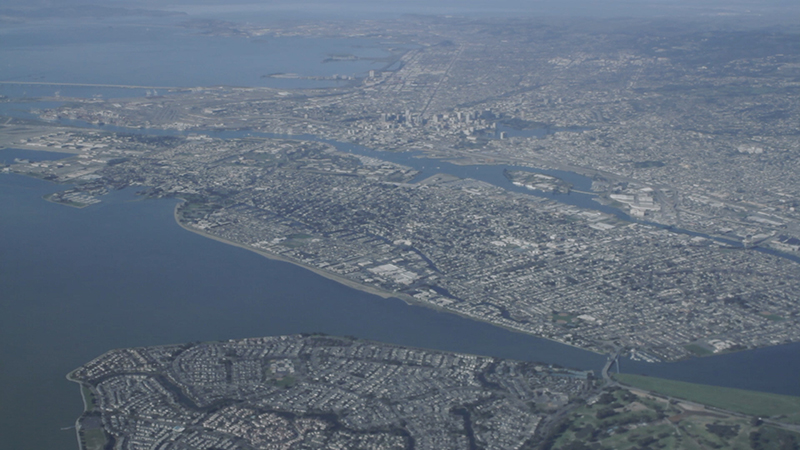 View of Oakland as seen from a flight arriving from Santiago, Chile.

Chileans have lived for twenty-nine years in a post-dictatorship society. A brutal and bloody US-backed coup d’etat in 1973 left deep, unhealed wounds. Many suffered the horrors of torture, the disappearance or death of family and friends, and the experience of life underground or in exile. The violence unleashed by the Armed Forces and their accomplices runs through generations, and the years have brought neither truth nor justice to the victims. The impunity of those responsible was brought into stark relief when Augusto Pinochet died in 2006 — ironically on the tenth of December, International Human Rights Day — without having been tried for his crimes against humanity.

For seventeen long years, the dictatorship was emphatic in exterminating the communities of the Left and delegitimizing their views of the world, imposing in place of socialism, solidarity, and el pueblo a discourse of entrepreneurship, competition, and individualism. The cultural change was profound. Strict mandatory curfews and the prohibition of freedom of association and expression left in their wake an atomized society. Chile’s once-rich public sphere was replaced by a country of isolated telespectators who watched shows like Sábado Gigante, which invited its audience to imagine an orderly country without social contradictions.

Yet the Allende-aligned Left persisted through memories of the thousand-day Popular Unity government and other acts of resistance against the regime. Indeed, the regeneration of the social fabric began in the very prisons of the dictatorship, whose many survivors tell of the importance of community in overcoming their experiences. So too in exile, Chilean communities were rebuilt through political and cultural activity — and, of course, through the many arms of the resistance in Chile during the dictatorship. Clandestine networks operated to ensure that victims of political persecution and remnants of allendista cultural patrimony — posters, books, images, films, and flags — survived underground and in exile; these artifacts became symbols of a political process that was interrupted. Together with these fragments of recent history, the capacity to have empathy and to recognize oneself as part of a community (and not just as an individual) have survived.

I was born at the end of the dictatorship and grew up in the ’90s. In the Chile of my childhood, we were taught to forget. Public education and the media repeated obstinately and systematically: “We can’t live in the past,” “one must look ahead,” “it’s better not to talk about some things.” History texts in school did not touch on Allende’s government, and even fewer spoke of the dictatorship. Those who participated in the armed struggle against Pinochet were portrayed as terrorists and to this day are not recognized as fighters against fascism.

Since coming to power in 1990, the political centrists and the so-called “New Left” have struggled with the problem of recent memory. The official policy has been to institutionalize memory — which is to say freeze it in place — thus stripping it of its lived, dynamic quality. Memory happens in the present; when it is only contained within institutions, it is essentially kidnapped, retouched, wiped of anything deemed inconvenient. For example, The National Commission on Political Imprisonment and Torture Report, published in 2004, has been an important advance in public recognition of the magnitude of Pinochet’s violence, but at the same time it sealed the testimonies of those involved for the next fifty years, denying access even to the exercise of justice.

The Museum of Memory and Human Rights is another controversial institution charged with freezing our past in place. The Right has accused it of politicizing history, demanding that blame be cast on the supposed faults of the Left for the breakdown of Chile’s democracy — a discourse that holds that the coup d’état, if not necessary, was unavoidable for the good of the country. The mainstream Center-Left meanwhile argues that human rights violations must be remembered to ensure that such abuses never again come to pass, that they cannot and should not be explained away by any historical context. What doesn’t appear on any side of the political mainstream in this debate is an explanation or acknowledgment of the lingering effects and violence of the dictatorship on contemporary Chile; absent as well is any recognition of those who profited from the regime’s genocidal politics.

Despite this strategic repression, different communities have taken on the task of building their own historical memory in order to carry on. The video fragments below were filmed for unfinished documentary projects. Each captures a moment of — and space for — social organization, attempting to lay claim to a popular memory that contests official memory. Likewise, my documentation of these projects is itself an effort to participate in this regeneration; film’s capacity to record and disseminate information makes it a fundamental tool in reclaiming popular memory. These are my communities. Reconstruction begins with us.

Founded in 1974 in Berkeley, La Peña Cultural Center initially served as refuge for the exiled Chilean community, generating early solidarity for the resistance. La Peña functions today as a multicultural and Latin American space where remembrance still takes place in the widest sense — where organizing, art, and critical discourse are means of reestablishing the past in the present and actualizing commitment to Latin America’s struggles.

Elizabeth Fuentes is a Chilean musician who directs La Peña Community Chorus, a group that reaffirms values such as social justice and solidarity.

In a 2011 event that rocked the Chilean consciousness, public high school students occupied their educational establishments for seven months, generating a mass mobilization that had no precedent in the post-dictatorial regime. They questioned the economic system and foundational values inherited from the dictatorship. The impact of this action continues to unfold; one undeniably significant result has been the emergence of a third political force, the Frente Amplio coalition, which grew out of the movement and whose members are the spiritual children of persecuted leftists from decades prior.

Through conversations with some of the student activists, I was able to examine the cultural elements that gave cohesion to the movement; I regularly found that their political and artistic expressions were tied to hip hop music. They repeated names like Ana Tijoux, Portavoz, Subverso, and others — political hip hop artists who had nourished young people with their reflections on and representations of reality.

These musicians belonged to networks of Chilean collectives, organizations, and artists that use hip hop culture as the basis for social and political work, differentiating this community from hip hop artists with a more commercial perspective. In political hip hop, artistic practice is part of a more encompassing organizational practice. These are not just artists who denounce the system through their music; they organize to better the conditions of their own lives through popular education, self-management, and critical thought. In doing so, they created a movement with organic local roots, confronting the representations of reality offered by the system.

José Antonio Palma is a historian and popular educator whose activism grew out of the world of political hip hop.

Every September 11, the Chilean coup d’état is commemorated. In 2013, the fateful date turned forty years old. As always, the places of memory reappear. How does a public space become a site of memory? First of all, there must be a community that is willing to remember. In Chile, human rights organizations have struggled to preserve the detention and torture centers as sites of memory, even as institutional practice has demonstrated a systematic intention to erase, rather than reconcile or commemorate, traces of an inconvenient past.

That September 11 in 2013, my friend Julio Duran and I decided to visit Santiago’s National Stadium, which was the most massive structure utilized as a political prison, where the Pinochet regime also carried out torture and the kidnapping of people for eventual disappearance. Like many other places of memory, the structure was closed off to the public, and we could only walk around its exterior, which anonymous individuals or collectives had reclaimed, as they do every September, with protest graffiti and artistic interventions. Julio, a Santiago-born musician and poet who has participated in hip hop organizations and popular education workshops, goes by the stage name Exiliado.

Diverse generations and distant geographic spaces speak across invisible bridges; they explore the mechanisms that make possible the persistence and reproduction of a community and its values. The legacy of the allendista Left undergirds Chile’s continuing struggles for the recovery of social rights. It is through these individuals’ shared experiences and the elaboration of a collective memory that our social movements continue to gather their energy.

“Fractured Communities, Invisible Bridges” was translated from the original Spanish by Caitlin Donohue.