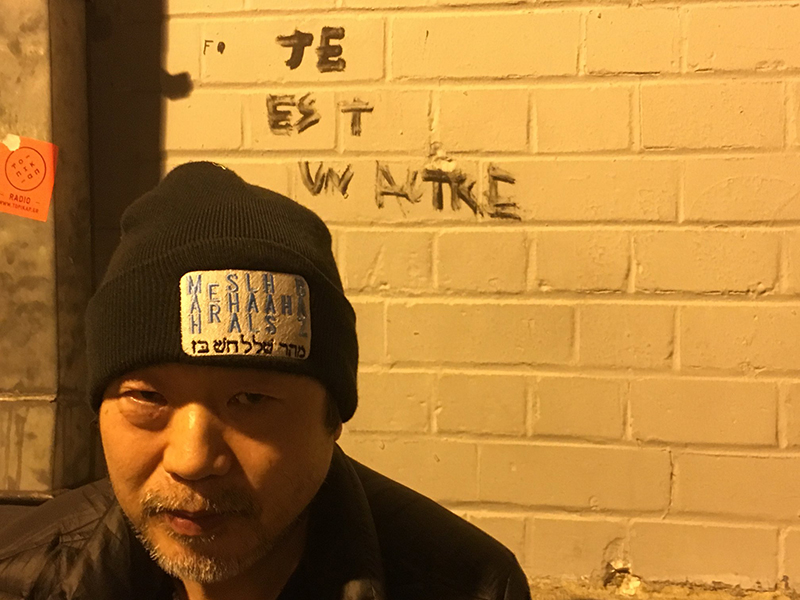 No Lenins visited as they did the Cabaret, but a visionary rock critic in my mind divided music into “our side” and “the other side,” then named the struggle between the two the History of Rock.

Takehisa Kosugi described the same problematique — the struggle between Tango and Indian music — as the battle between the vertical and the horizontal.

The underground in the Far East might have been a frontier based on too much deep reading of limited information available only from foreign books or misreading in the acceptance of imported sound sources.

The History of Rock, in other words, might have only pointed to a dogmatic and domestic archive of a series of vinyl records shared by mid-heaven mail-order that flew over the Pacific Ocean.

Capitalism in the Far East has thus reached the stage of accepting The Shaggs. 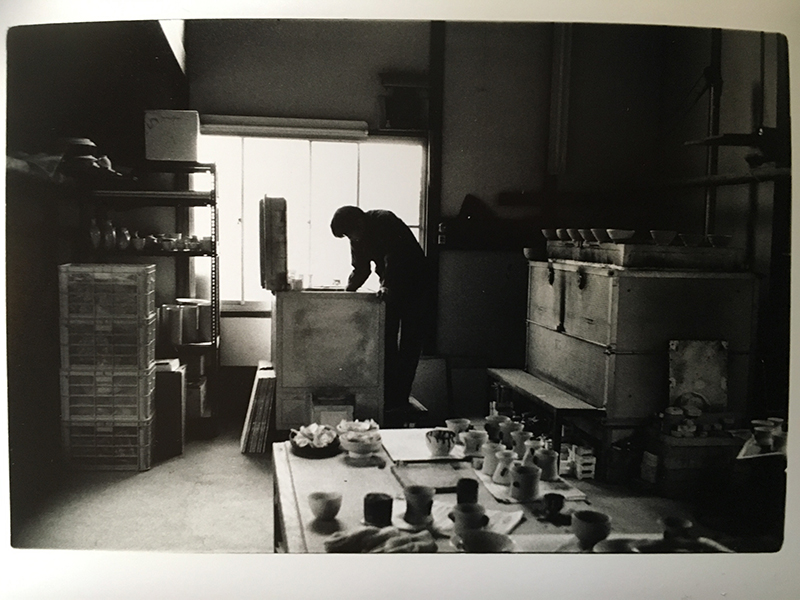 In free music, it was very difficult to sing songs as songs, and there was no other way than to see an ally in an enemy and an enemy in an ally.

The autumn of politics also began in music in order to sublate the division between the back song and belly song within the Korean Peninsula. The spine trembles when you are moved by songs related to a gathering of people, such as the International, Warszawianka, songs honoring Nazis, national anthems, etc. On the contrary, when reading something like Antonin Artaud, the shivering impression comes to the belly.

We used to call ourselves “everyone,” like young Decembrists in Vladivostok.

In the late 1980s, Maher Shalal Hash Baz was recording an album, Return Visit To Rock Mass, under the premonition of the collapse of the financial capitalist economy, which was called “the bubble,” the setback of the movement of East Asia Anti-Japan Armed Front, and the apocalyptic expectation that the borders would disappear at the end of the Great Tribulation. Many of “everyone” died. The enemies and allies in music vanished like mist. The underground also disappeared in the ’90s.

Considering how people have been gathering in Maher since the beginning of this century, the first thing that can be said is that Maher does not rely on my neighborhood association composed of local paddy field farmers, which has been continuing since the Muromachi era (c. thirteenth to fifteenth century). Though I know such autonomous organizations will survive even when Japan itself disappears, I keep a certain distance from their ritual of Shinto. Therefore, as a resident, Maher is not trying so hard to boost the momentum of “permaculture” activities like painting the intersection in Portland town.

Because I place the Christian community in which my family is involved higher than the nation, I am living like an alien resident here, though Maher is not composed of the members from that community either.

I also keep a certain distance from the craftsmen of the same profession and their ceramic union. My father taught them his brushwork, which is applied to porcelain bodies, and helped the ceramic industry of my town develop. If I were in the same boat, I could have been satisfied merely by playing blues du jour with potters at the weekend bar. But such a bar does not exist in my town. Michael Cardew was a collaborator of Bernard Leach and the founder of the studio pottery movement in the UK. When I visited his Winchcombe Pottery, I unexpectedly came to know that Cornelius Cardew was one of his sons, and felt like I understood why I had been doing music. 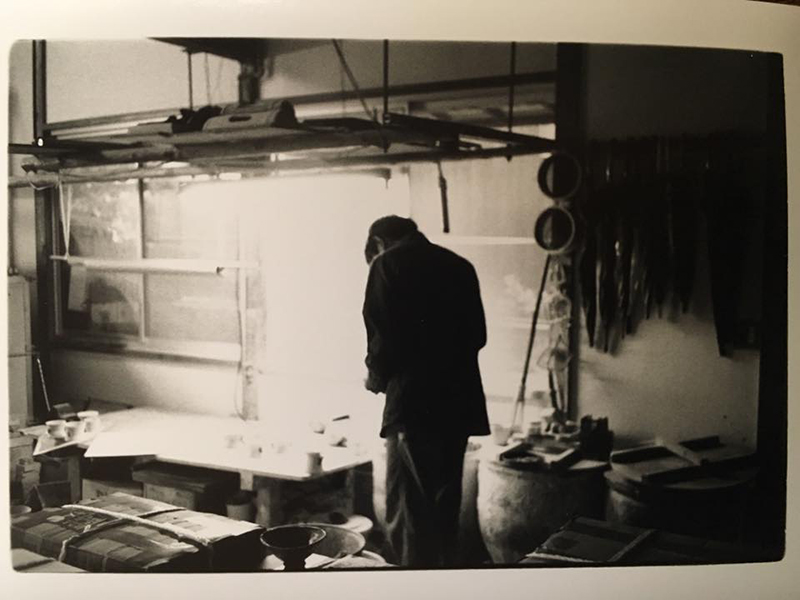 The way in which a craft designer obliges other workers to imitate his design is similar to the way in which a composer forces the musical score on the performers. Everything has been done in order to avoid such vertical structures in Maher. Moreover, it has to be done without killing the music itself. As in the case of Red Krayola’s The Familiar Ugly, a group of fifty anonymous followers who appear on their recordings, the organization theory from my father is based on the notion that “people-gatherings are good.” To succeed myself, I had to be armed with formats that accompanied endurance and ease, rather than those that required difficult finger skills in any place I was thrown in. To create simple but living lines, one has to consider the whole atmosphere. Maher is not a band that divides the payment equally, nor is it a workshop that shares the cost of the venue. Voluntary participants come and go each time, which is due not only to the economic impact of financial disparities in Japanese society, but also to the accompanying strategy of asking, “In a society of ultra-capitalism, if we are going to do music as music, we can do it only in this way; what do you think about that?”

Maher used to find some local traditional songs then try to throw those at Ainu and Okinawans. It was not on the same path as movements of De-Western or Asian-Meetings such as “Occupy” or “Collective.” I do not consider a local culture dissemination from my town as a design for a movement like Glasgow’s. I am not trying to make No New York in my town. I am not feeling nostalgic about the compilation album from cities like Sheffield or Akron during the punk era. 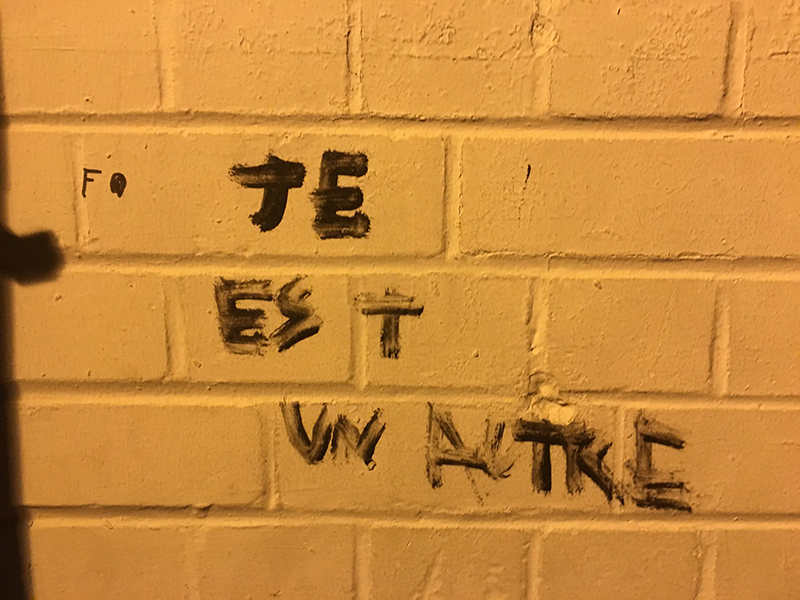 There was a graffiti written as JE EST UN AUTRE on the wall outside the Venue in Brussels. I initially thought that it was the curse of a refugee who started learning a new language. But my friend Zach Phillips told me that it was from Illuminations. I took a picture there. I have been writing so far of the ways that Maher was “not” blah-blah-blah; now I remember that graffiti.

Even if Maher has always been “an other,” I realize that the musical family of Geographic and K certainly worked in cities like Lille, Melbourne, and Montreal, where I felt Chris Cohen’s presence always.

Since the beginning of this century, dragging the dualistic remnants of enemy/ally through music by applying its own yardstick, Maher has been trying to identify various towns, such as Bristol, Liège, Paris, Nijmegen, Göteborg, San Sebastián, Marfa, Detroit, the Lower East Side in Manhattan, Barnet in North London, Yangon, San Francisco, or the cities on the I-5 from LA to Seattle.

In Glasgow — based on the fact that the Scottish folk songs that were introduced to the Japanese school songs of the Meiji era (ca. eighteenth century) already seemed to form the lower layer of the consciousness of Japanese people — Maher played songs with familiar and naive melodies. In the cities of Flanders and Porto, I chose and played Late Renaissance pieces which were the first Western music the Japanese accepted. At that time, Maher was like l’autre cap cities that were barely breathing by breathing only their heritage that they plundered during the age of great voyages. It resembled the forgotten courtesan who took a harp, did her best at playing on the strings, and made her songs many in order to be destroyed. Isaiah 23:16: “Take a harp, go about the city, thou harlot that hast been forgotten; make sweet melody, sing many songs, that thou mayest be remembered.”

In the Northwestern US, Maher was distracted by the close resemblance of the vegetation there to that of Northern Japan, and thought of the theory of continental drift. Maher at that time was like a warship over the Pacific Ocean. The fuel was the debris of the earthquake disaster. The Pacific Rim is connected by radioactivity.

Tags: Tori Kudo, We the People