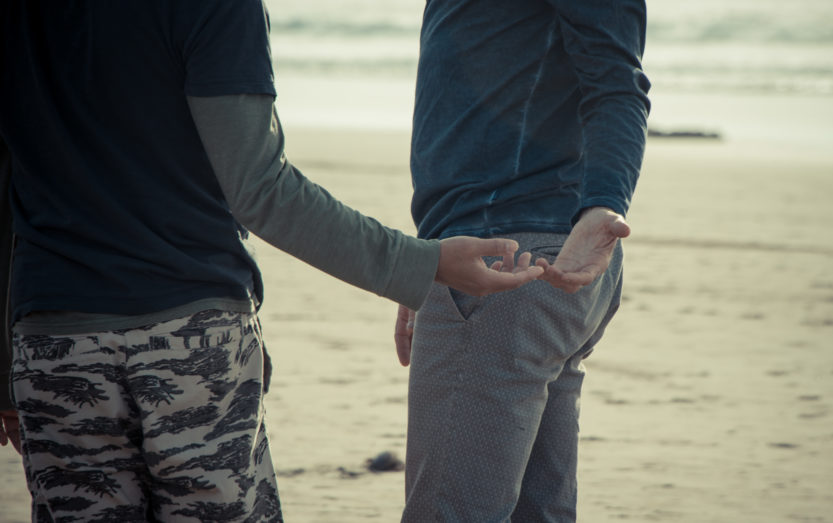 Gerald + Keith; created and performed by Gerald Casel and Keith Hennessy on Ocean Beach (near Sloat), San Francisco, November 18–19, 2017, 2pm-ish;  Gerald + Keith is part of a suite of performances organized under the title freedom?, produced by Circo Zero and instigated by Keith Hennessy. Photo: Robbie Sweeny.

A small group of us sat bundled up on Ocean Beach one Saturday in mid-November, arranged facing the surf, in a rough semicircle where the sand broke off in a miniature cliff created by the tides. A perfect dance amphitheater, with dazzling sunshine for lighting design, wind and waves for a soundtrack.

Myriad bodies moved through our field of vision: joggers, dog-walkers, beach-combers, surfers. Two bodies moved closer to us, moved in a way unlike the others. Their interactions were gentle, at once calibratedly awkward and indeterminate: they folded themselves into stiff blue blankets, the kind you wrap your furniture in when you load it into a truck; placed hands on limbs as if engaged in ritual healing; circled each other, roughly mirroring geometric formations. These bodies belonged to Gerald Casel and Keith Hennessy, and they were engaged in one iteration of freedom?, a series of site-specific performances instigated by Hennessy. 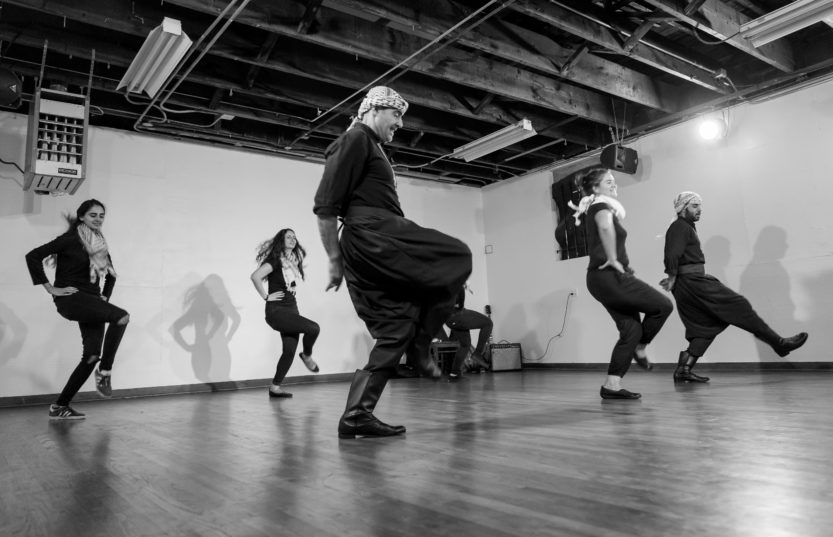 Two Saturdays later I was at Temescal Arts Center, sipping red wine from a clear plastic cup and eating a Lanesplitter slice at a casual reception prior to a performance of Palestinian Dabke by Aljuthoor of the Arab Shatat, choreographed by Wael Buhaissy. Buhaissy’s interpretations of the Arab folk dance were to be paired with two short improvisations by musician Tarik Kazaleh and choreographer and TAC founder Leyya Tawil, and I was curious to see what relationships, if any, would develop between the two performances.

It’s tempting here to describe the Dabke as “traditional” and the improvisations as “experimental,” convenient dance criticism shorthand. But as Kazaleh moved between oud and electric guitar, and Tawil spiraled her lithe legs down through percussive stamping phrases, and as Buhaissy’s troupe cycled through myriad permutations in style and form my American eyes could only vaguely discern, I was reminded again how porous the border is between the traditional and the experimental, and what reductive placeholders those terms are. In reality, any artist experimenting with form is building on myriad legacies; and any artist working within a tradition is shuttling between consolidation and risk.

How an art work reads often has less to do with any attributes inherent to it, and more with a viewer’s frame of reference. Casel and Hennessy’s freedom?, for example, or Kazaleh and Tawil’s improvisations, are more immediately familiar and legible to me than Dabke; they are, in that sense and for this viewer, more traditional. Seeing all of these artists’ work in close proximity underlined how all live work is, in some way, community work, whether that community is comprised of individuals squinting in the sun in a semicircle on Ocean beach or joining hands at the end of the TAC show for a circle dance open to all.

And this brings me to Limited Edition, a new performance program Open Space is leading during our winter season. I’m so pleased to announce this initiative, which we’ve been plotting for months, in partnership with the good folks at our fellow San Francisco organizations CounterPulse, ODC Theater, The Lab, Z Space, and Performance at SFMOMA. From January through March, we’ll be following select presentations by our collaborators, dispatching artists and writers to respond to these live works, and to address issues, questions, and concerns in conversation with the performances, and with our overall theme of “Forward-Looking Lineages” (which was inspired in part by Robert Rauschenberg: Erasing the Rules, a retrospective now on view at SFMOMA, highlighting the collaborative and interdisciplinary aspects of Rauschenberg’s practice). You can read the press release here, and go here for information about various shows, including place, time, tickets, and all that good stuff.

Gerald Casel, Keith Hennessy, and Leyya Tawil are among the artists we’ve commissioned to write for this series; their work, on and off the stage, represents just a tiny fraction of the wealth of performance the Bay Area has to offer. True to its name, Limited Edition will follow a similarly small but rich vein of work, with the belief that performance is one of the key arenas in which our culture talks to and with and about itself — as Open Space contributor Siobhan Burke elucidated so eloquently here (stay tuned for her Limited Edition dispatch), in an essay musing on the politics of performance during a fraught political moment. 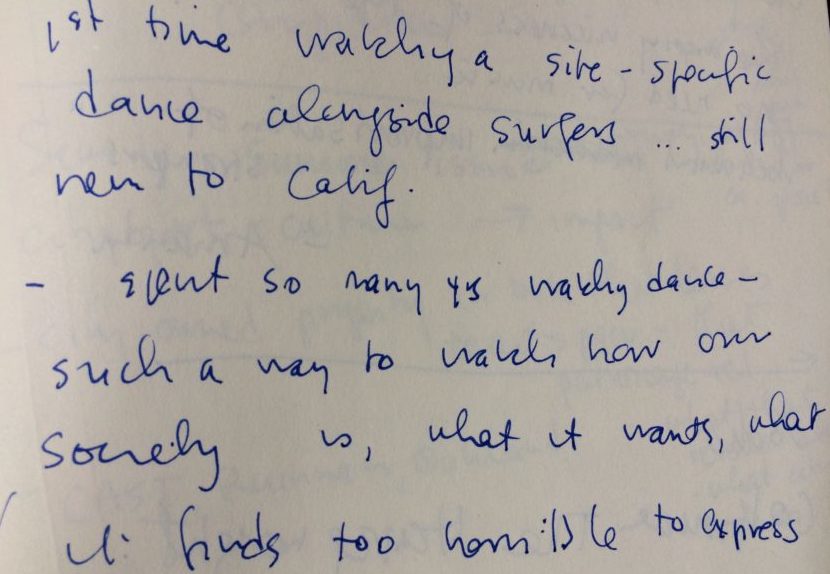 I spent many years like Siobhan, working as a daily dance and performance critic. When I was taking notes while watching these two shows on the beach and at TAC, I was struck again by what an extraordinary vehicle performance is for conveying what a society believes, what it desires, what it finds too difficult to deal with head on. There were moments in freedom? when Gerald and Keith picked up a microphone, to offer what seemed like recipes (for liberation? for sanity?) such as “fewer television shows with police in them,” or to remark on “the contrast between seeing us together and the current news cycle.” Their words were often overwhelmed by the rush of wind, but the care they took with each other was clear. And at TAC, when Buhaissy told the audience that they dance to “resist attempts to appropriate our culture, to destroy it,” but also, irresistibly, because “Dabke is fun,” his words might have been etched in the proudly held torsos and deftly turning feet of his companions.

The body contains multitudes, and multiple meanings. We’ll try and tease out a few of them over the course of Limited Edition. Stay tuned. And please, join us. We’ve got a seat with your name on it.