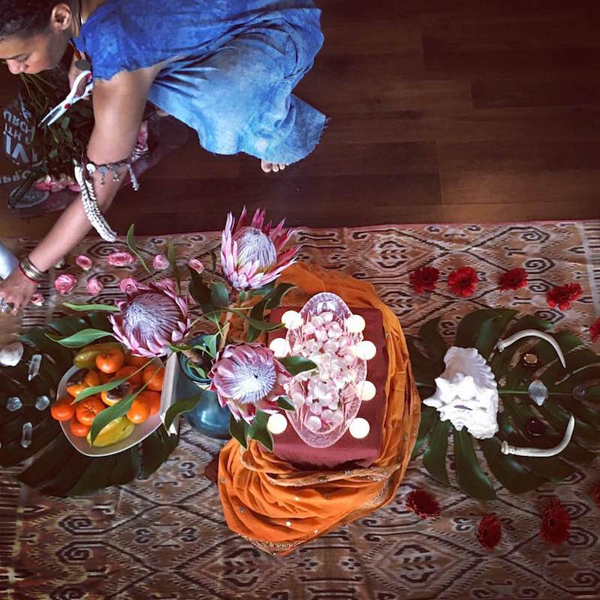 When Maryam Hasnaa At-Tauhidi experienced a spiritual awakening six years ago, she didn’t have anyone to talk to about it. Names would come to her in dreams, guiding her to certain books; while awake, she’d experience flashes of other lifetimes. So, like anyone who feels alone, she went online.

“The only people I knew that were experiencing what I was experiencing was when I was reading books about gurus and stuff,” said At-Tauhidi as we sat down next to the elaborate altar in her East Oakland home. “But I knew — there’s gotta be other people going through it.”

Raised in a Muslim household in Michigan (her mother is the religious scholar Dr. Amina Wadud), At-Tauhidi felt the need to forge her own spiritual path as she came of age. But when she relocated to Oakland five years ago, she became part of a Sufi community where her mother was already established as a mystical teacher. She has since taken on a leadership role in an esoteric priestess community that combines Sufi and Hebrew teachings, and she also studies Taoism, metaphysics, and Jungian psychology.

When At-Tauhidi was experiencing what she describes as a sudden, rapid “opening of psychic gifts,” she began tweeting about her revelations under the handle @thatgirlhas — first to a hundred followers, then to thousands. When her 2015 Medium posts about living as an empath (a person with heightened empathetic abilities) and shadow work (which has to do with healing emotional trauma) began to circulate in online spiritual communities, her Twitter following multiplied. Now, her daily affirmations, herbal medicine tips, and spiritual teachings reach over 38,000 followers (while she only follows forty-seven accounts).

At-Tauhidi’s work is particularly resonant at a time when many people, especially social media-savvy young people, mistrust religious institutions yet yearn to connect with something greater than themselves. The intersection of non-Western or non-mainstream spirituality and pop culture isn’t exactly new — take Deepak Chopra, for instance — but as technology advances, the overlap of these realms has taken on different forms.

Chani Nicholas, the Los Angeles astrologer known for her insightful and practical horoscopes, reportedly makes six figures from her eponymous website. And plenty of other spirituality and wellness-themed websites and social media accounts have popped up in recent years: Black Girl in Om, for example, is an online publication and podcast catered towards Black millennial women. And Instagram accounts such as @MysticMamma — which pertains to a wellness and spirituality website of the same name — boast hundreds of thousands of followers.

The people behind these popular social media accounts and websites come from a variety of cultural backgrounds and spiritual traditions. But the current popularity of non-Western spirituality among millennials can make it easy for critics to cast them under the same trendy, “witchy” umbrella. At a time when Urban Outfitters sells tarot decks and Vogue runs articles about mystical nail art, the collision of these realms sometimes evokes the ways yoga has been commodified over the past several decades.

The practice of diffusing spiritual teachings into aesthetically pleasing Instagram posts and shareable tweets raises interesting questions. Does a spiritual practitioner’s number of followers attest to the potency of their teachings or to their adeptness at viral marketing? And how do full-time healers draw the line between making a living and commodifying their spiritual practices?

But spiritual practitioners who have found success on social media insist authenticity and online popularity aren’t mutually exclusive. “For me, this was not a business venture. It was truly a Spirit-led initiative to use my faculties and gifts to be in service of the whole,” wrote Mijanou Montealegre, the founder of Mystic Mamma, in an email.

She explained that while she views her social media accounts and website as a practical means for sharing information and fostering community among likeminded people, her true spiritual work happens offline. “It is essential that we unplug from all technology to truly experience ourselves and the sacred world that surrounds us.”

In an interview at her West Oakland apartment, Nono (a.k.a. Namaste Shawty) — a DJ and the co-host of the spirituality-themed podcast Las Brujas Radio — said that she appreciates the ways that the rising popularity of non-Western spirituality has created an abundance of online resources. But she’s also skeptical of those who might be seeking to profit from this trend. 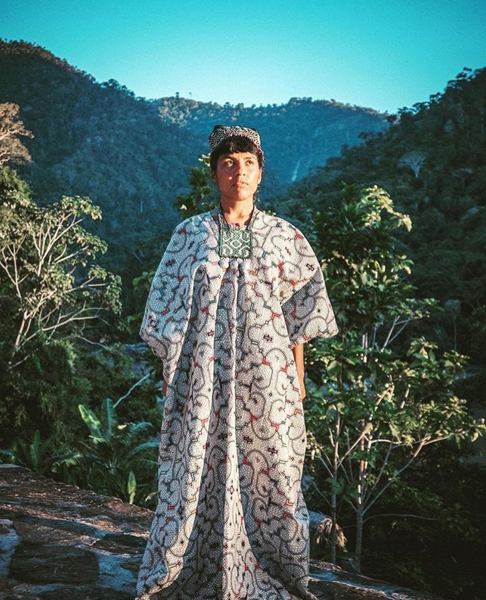 “I’ve personally experienced things where it’s like wealthy white women working with one indigenous woman and they pay her to teach them all these things and give them all these tools,” said Nono, a Yoruba practitioner of Salvadorian heritage. “But when I tried to be part of it, I couldn’t because I didn’t have $5,500 for it. I’m just like, ‘Wow, how is my own culture being taken away from me and then being sold back to me?’”

She explained that, despite the instances of profiteering and cultural appropriation she’s witnessed, she is inspired by like-minded women of color — including At-Tauhidi — who are sharing their spiritual beliefs online.

“A lot of times I felt like when she would share something, it’d be directly speaking to me,” she said when I mentioned At-Tauhidi’s work. “And that was helpful in my journey.”

At-Tauhidi charges for wellness workshops and one-on-one sessions with clients, but she also offers a wealth of information online for free. She recently narrated a guided meditation called Total Serenity on RYOT, Huffington Post’s free virtual reality app, where the viewer gazes into a luminescent galaxy as At-Tauhidi guides them into relaxation. Many of her teachings can be found in her Medium essays, YouTube videos, and “audio newsletters” on Soundcloud.

“Some people are like, ‘You charge for sessions?’ I’m like, ‘Yeah, it’s my time, my energy,’” she explained. “The information’s free, you can go out and get the information anywhere. My time, my energy are not free. I teach about energy exchange and what it feels like when it’s healthy and balanced. So that’s the thing — I really advocate for the wellbeing of healers: How to be in service in way that’s loving to self as well.”