Down the Rabbit Hole: On Psychedelic Sex from Buzz Bense’s Gay Stash 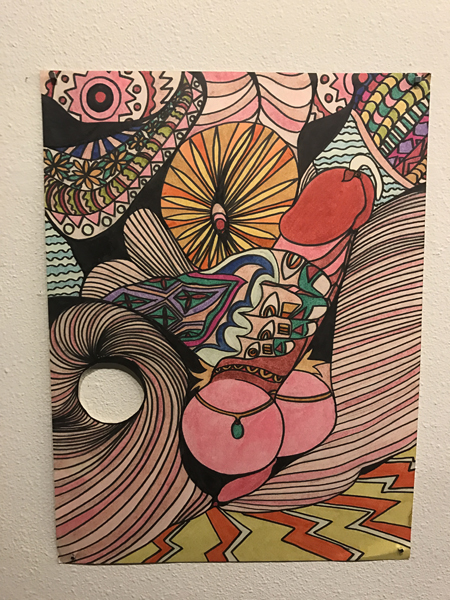 Ardent activist, seasoned performer, avid theater director, and sex-positive force in San Francisco throughout the ongoing AIDS crisis, Buzz championed safe sex and community during times when those terrains were particularly fraught. He passed away on November 19, 2016 at the age of 67, leaving a legacy of sexuality activism and special, smutty collections.

CSC is now the repository of the Buzz Bense Collection, which includes a significant archive of over 200 safe sex posters, dating back to the 1980s, that Buzz donated to CSC in 2011. In 2013, I had the pleasure of co-curating SAFE SEX BANG: The Buzz Bense Collection of Safe Sex Posters, an exhibition of nearly 100 of these posters with CSC’s gallery director Dorian Katz. Buzz powerfully described the collection he amassed: “These posters do more than chart the tragedy of an epidemic, of an outsider community reeling from grief, loss and the decimation of a blooming culture of sexual liberation. The history of these posters is a story of a fight against stigma, hatred and ignorance; of a community stepping up to take care of its own; of finding a way to extinguish fear and build pride and self-esteem; of devoted efforts of committed activists to communicate a path to health and survival.” 1 Buzz’s story — as graphic designer of multiple safe sex poster campaigns, active voice in the Coalition for Healthy Sex, and founder of the safe sex club Eros in the heart of the Castro — is one of life-saving, on-the-ground community care. 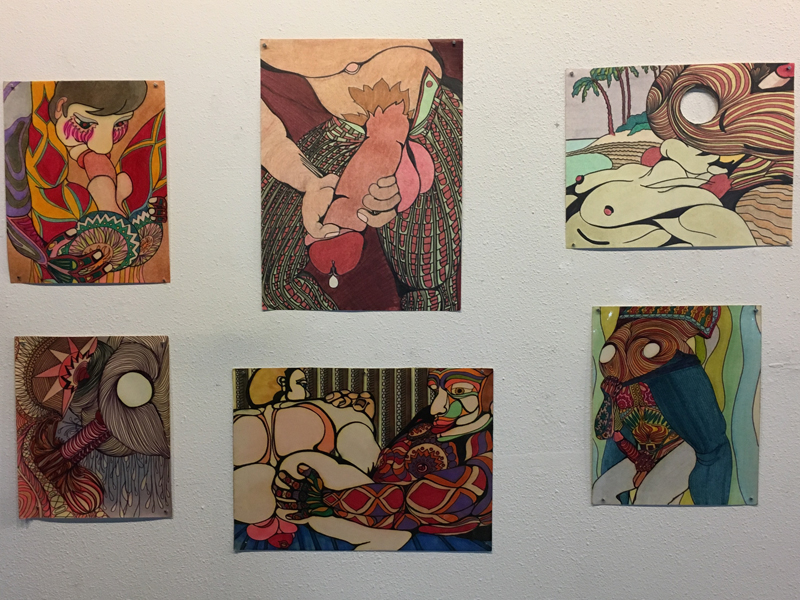 The CSC, tucked behind an unassuming facade on Mission Street between 9th & 10th Streets, is a hidden gem in San Francisco’s cultural landscape. CSC’s co-founders Dr. Carol Queen and Dr. Robert Lawrence and gallery director Dorian Katz are deeply committed to the pedagogical and pleasurable potential of learning about sexuality through art and culture. Knowing how few art spaces are committed to art and ephemera about sex and sexuality, CSC aims to fill some of that void, exhibiting contemporary art and archival materials from its impressive collection. Its gallery is a fifty-foot wall opposite an extensive library, and the multi-use community space supports activities ranging from sex worker writing workshops, presentations by touring sex educators, erotic performances, and other collective gatherings. CSC provided the ideal context for SAFE SEX BANG, and for Buzz’s deeply moving memorial service Premorial: A Circle of Love and Celebration for Buzz Bense on January 22, 2017. 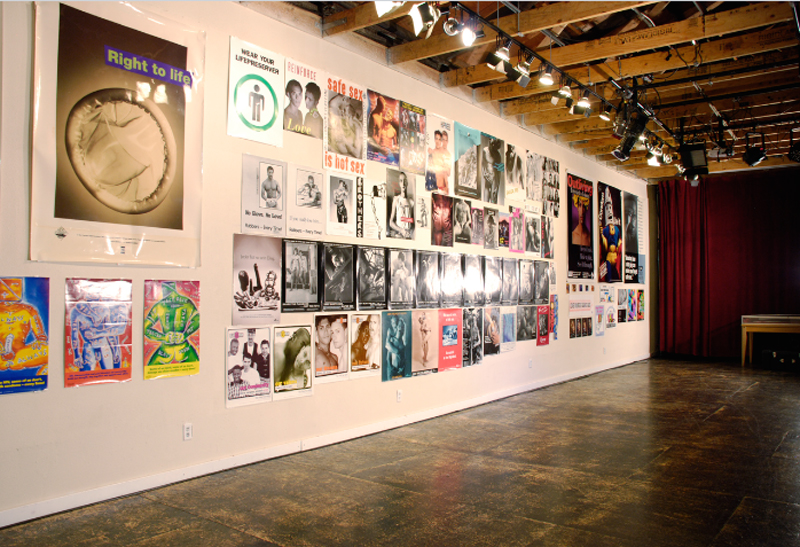 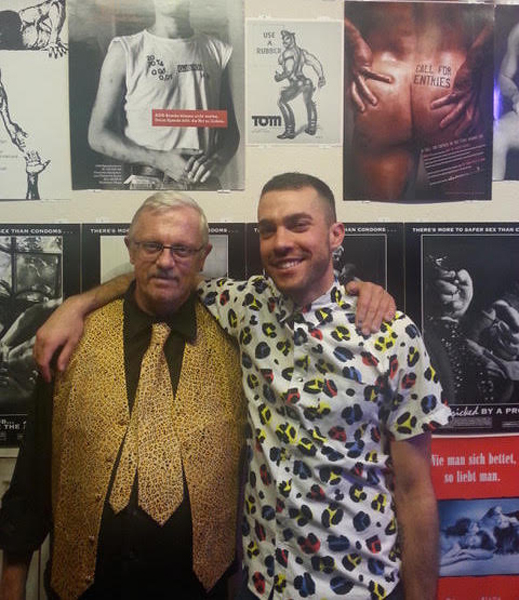 The last time I saw my dear friend and gay mentor Buzz was early November, shortly before he passed away. He excitedly shared a collection of lucid drawings, which, similar to his poster collection, he had held onto for decades. I lovingly refer to Buzz’s collecting as gay stashing — tucking away sexually explicit artwork and ephemera out of sight until a satisfactory moment of reveal (think: porn under the mattress). Buzz received these drawings from his dentist Gene Sigler, who was given the artworks by a patient named J.D. around 1975. J.D. said they were the work of a friend, and the artist who made these unsigned works at least four decades ago remains unknown.

The kaleidoscopic world created by the mystery artist brims with trippy trysts and prismatic penises. Saturated with color, muscles and veins pulse with patterned bodies in the throes of hardcore action. Often cropping figures to zero in on their most sensual parts, the artist treats the male body and gay sex as his obsessive object of creative exploration. The works evince an ecstatic delight in making libidinous desires explicit; a quality that feels typical of the cultural experience of 1970s San Francisco. The personal is political is pleasurable in these homoerotic drawings created during the Psychedelic era and a moment of fervent gay liberation. In foliage-filled landscape scenes and motel-like domestic space, the joy of unbridled homosexuality takes place across a ubiquitous range of settings in these fantastical drawings. In one of my favorites (pictured above), a tight cock and torso crop surges with the electric energy of an LSD trip. Striated muscles, bejeweled balls and a lightning background provide a sensory overload that nearly distracts from the money shot. 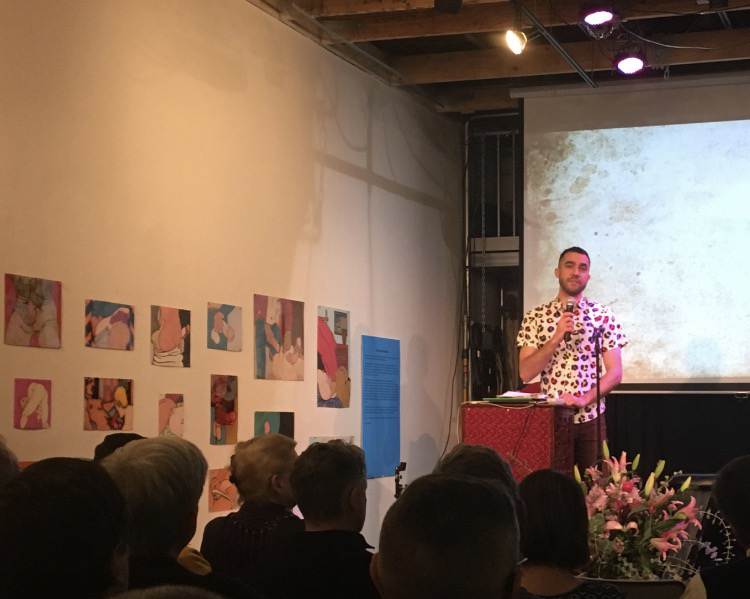 Alex speaking at Premorial: A Circle of Love and Celebration for Buzz Bense at the Center for Sex & Culture, San Francisco, January 22, 2017. 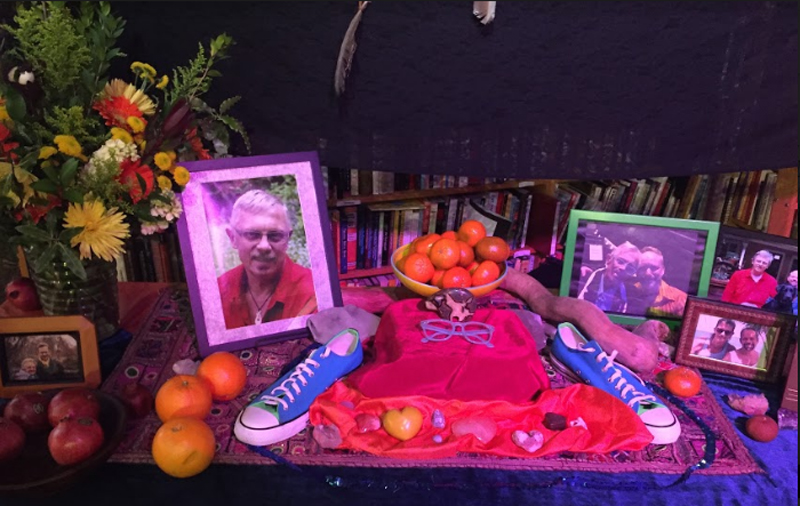 Altar from Premorial: A Circle of Love and Celebration for Buzz Bense.

Buzz’s parting wish to me was that I work to exhibit and write about these drawings; CSC’s current exhibition of 51 works (out of nearly 200), titled Psychedelic Sex from Buzz Bense’s Gay Stash: A Memorial Exhibition and co-curated with Dorian Katz, is dedicated to that wish, as is this writing for SFMOMA’s Open Space. CSC had a packed house for the actual service, which was equal parts remembrance and ritual. San Francisco-based artist Seth Eisen arranged and emceed the heartfelt event: speakers reflected on Buzz’s steadfast commitment to HIV/AIDS activism and sincere camaraderie within the gay community and beyond while photographs and videos of Buzz through the years showed his sweet smile and showstopping verve. Buzz’s pioneering presence was evoked throughout, in meditative moments and communal songs, as floating amid the hallowed rafters of CSC. 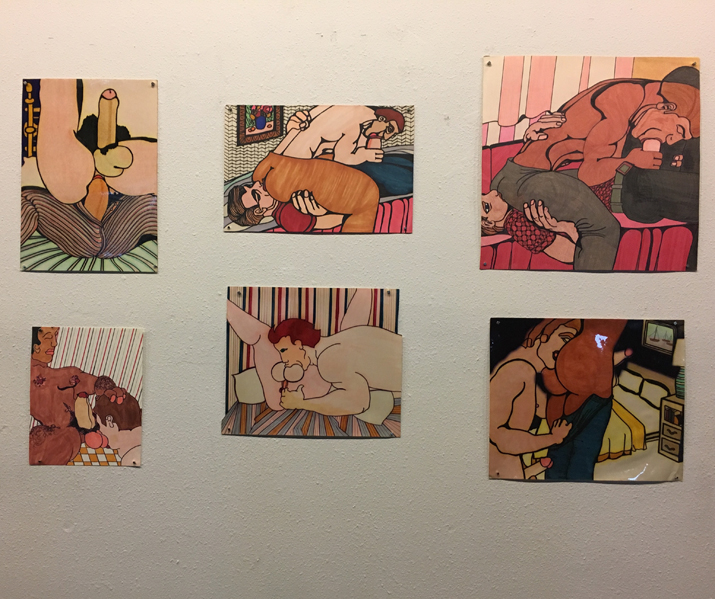 And then there were the vibrant, anonymously created drawings, filling CSC with a sexual panoply fit for Buzz. Speaking at the service, I reflected that Buzz taught me the importance of community, love, and fighting for what you believe in — all while having a sexy, performative flair. I think he would have loved having these titillating works on display during his service; pleasure at play until the very end.