Why We Got W.A.G.E. Certified 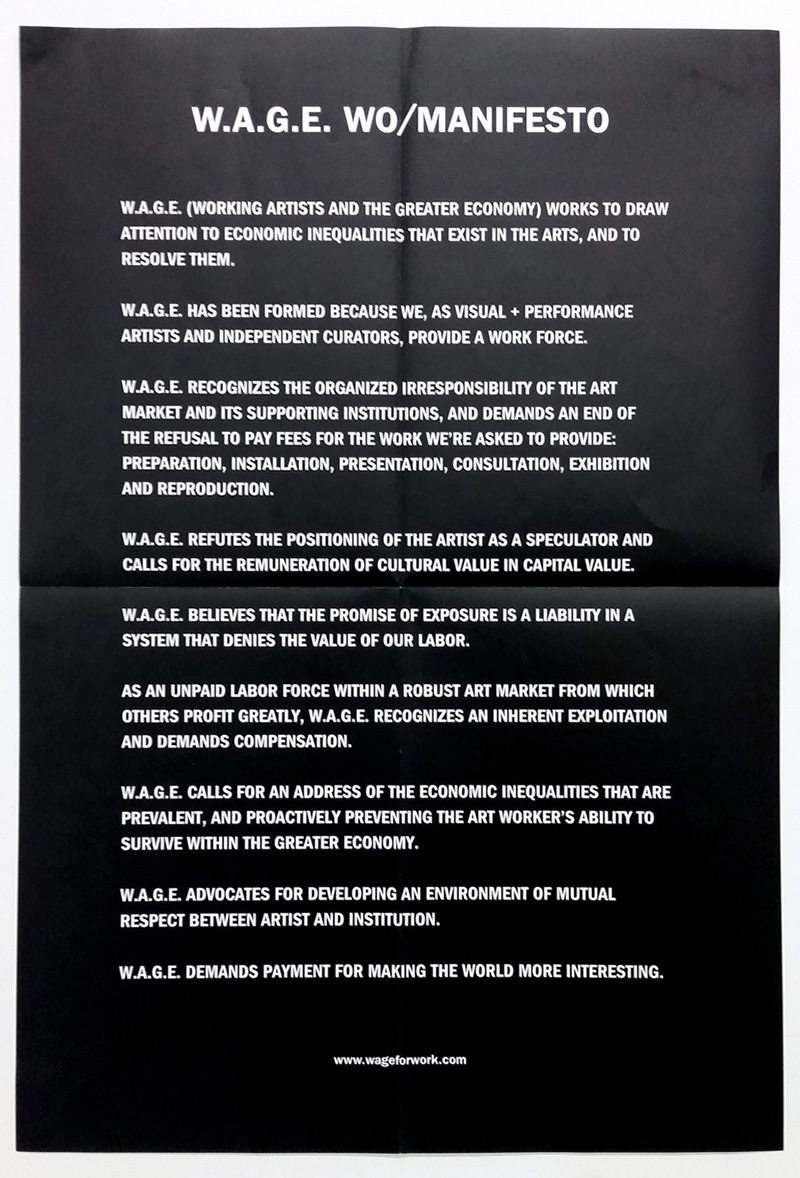 As some of you may know, for most of my adult life I’ve made my money as an independent writer working within various institutions, everything from one-off commissions to adjunct/guest artist teaching gigs to ongoing contractual work that is the equivalent of a full-time job, minus health insurance, paid vacation, 401K, etc. In fact, I wrote about this “nonstop juggle, freelance hustle” for the only piece Open Space ever commissioned me to do, not long before I took this position; I was, at that point, worn down to the point of illness by the hustle — mostly not the work itself, but the managing of it. A huge part of this was money: explaining why I couldn’t write for free, arguing all the time that I should be paid more, chasing down deadbeat organizations to get my measly pay, and, of course, filling out torturous grant applications.

I couldn’t listen to one more representative of a gleaming institution explain how tight the budget was. What do you say to that?! Finally, I could only think to answer “I appreciate that, and I’m sure you appreciate that my budget is tighter than yours.” That usually ended the conversation entirely.

So now, working inside one of these gleaming institutions, it gives me great, great pleasure to announce to you all that this month Open Space became W.A.G.E. Certified, meaning that from here on out we agree to pay our contributors on a fair wage scale calculated in relation to SFMOMA’s total operating costs. This is the FIRST time a department within a museum has become certified; as W.A.G.E. stated in its announcement (which you can read in full on the organization’s website, along with lots of other super important stuff): “The condition of Open Space’s certification defies the most common counterargument we hear anecdotally from museums about why W.A.G.E. Certification isn’t fair or possible at their scale: It is said that artist fees should not be determined in relation to an institution’s total operating budget because that number includes expenses that have nothing to do with its exhibitions or programs — such as maintaining a collection or operating a retail store. Instead, some argue, fees should be measured in relation to the budgets of the individual departments that contract artists’ work.”

W.A.G.E. disagrees. So do we. Below is my statement in full:

Open Space is a digital and live platform for creative and critical responses to art and culture. We’re very lucky to be supported by an institution that values our community-based, non-museum centric position. It’s imperative we use this support as an opportunity to do right — because it’s ethical, yes, but also because it fosters better work.

Those of us commissioning work must not operate from a sense of resource scarcity that, often, simply camouflages over-production. Arts organizations are ever-more involved in the role of content creation; this work fills a vacuum, especially as journalism has radically retreated from arts coverage. But too many of us refuse to acknowledge the labor behind these creations, instead treating them as add-ons and offering paltry sums of compensation.

Many of us makers and commissioners are guilty of the scarcity/over-production conflation, even while, as “consumers,” we’re deluged with more than we can possibly absorb. If individuals were paid more, they could afford to do less, and do it better. If institutions paid more, they would commission less, and do it better — have more time to research who they should be working with (to ensure consideration of all forms of diversity); spend more time helping to shape and frame the work, so that each piece gets the care and attention it deserves. As any editor will tell you, more typically doesn’t equal more: it’s better to pay a young writer $400 for 400 words, and work overtime meticulously guiding her through the editing process, rather than offering $500 for 2000 words and ending up with a half-baked project that we lack time to fully edit.

I know full-well the difficulties faced by independent artists, having spent almost my entire career as a freelancer. I decided to become editor-in-chief of Open Space in part because of its history of artist-centric behavior. In this sense, W.A.G.E. Certification is a crucial component of Community Engagement. Far from a special effort, it’s simply part of the job.