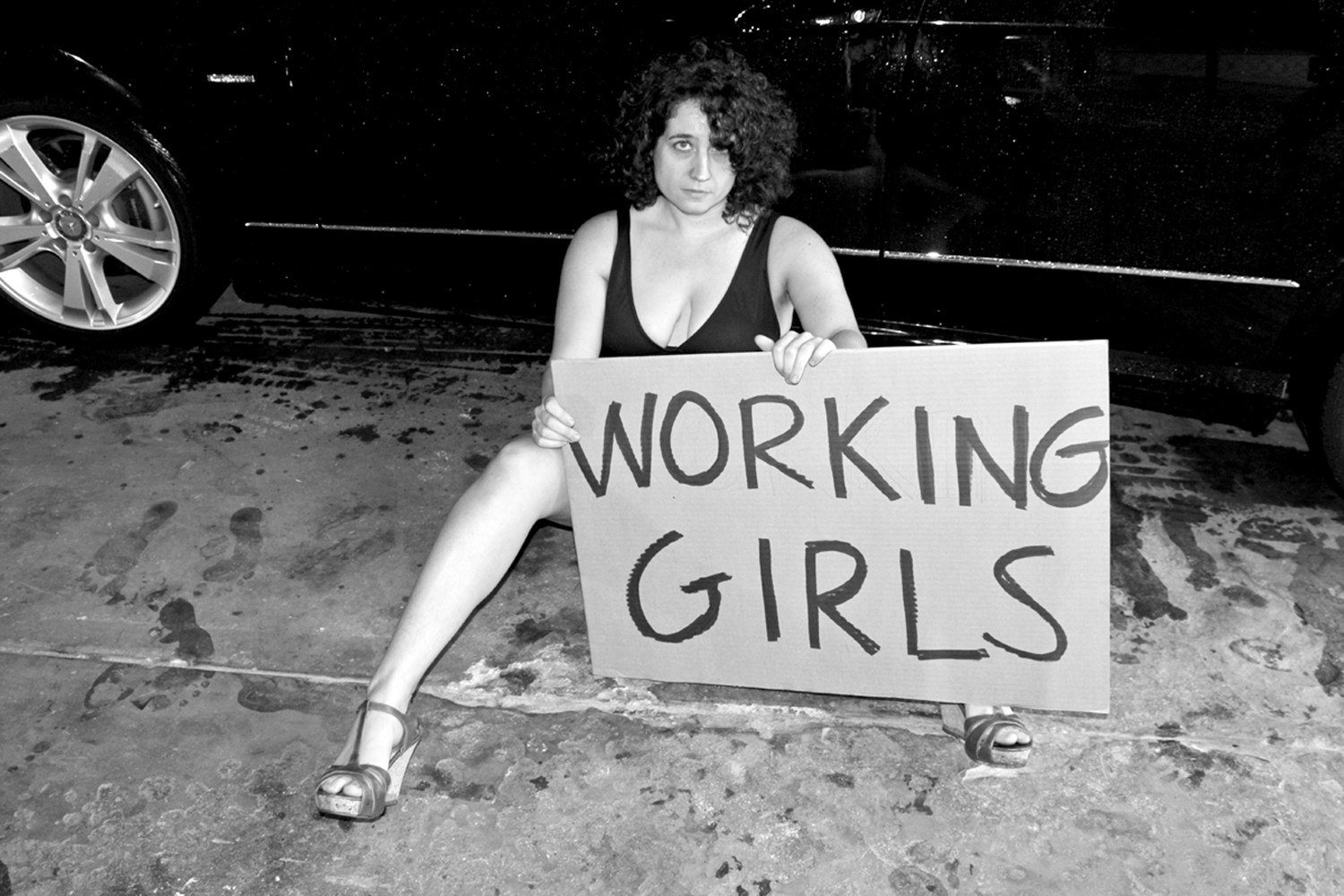 Claudia La Rocco in Taste, a site-specific performance and installation created by Rashaun Mitchell and Silas Riener in collaboration with La Rocco and Davison Scandrett. Presented at the BFI Gallery in Miami, as part of the O, Miami Poetry Festival.

“What am I going to say? Amount of work I do, me & my friends, support the writing habit — as poverty is outlaw writing is outlaw — computer — great — but no more money — I get off & I still have a body & I still have to eat…” — Kathy Acker, as quoted by Chris Kraus in her 2001 essay “Shit On My Sleepmask”

I’ve spent much of the past two weeks flat on my back, dealing with some sort of spinal neuralgia situation that makes it difficult for me to go to my office (i.e., my laptop). I’m otherwise healthy, it’s relatively mild, it will pass, etc. — but it’s a sobering reminder of what’s to come. So many of my writer friends know the drill of acupuncture visits, physical therapy, increasingly baroque ergonomic systems, all in the hopes of mitigating the insidious wrecking that comes with our work.

The sitting, the typing, the slouching, the endless hours at makeshift work stations that aren’t designed with bodies in mind, the inability to afford preventative health care and the predisposition, perhaps, to ignore physical information… 1

Meanwhile, it’s August, always a scary time for freelancers. The bills don’t stop coming, but the gigs do. When my health insurance payment ($469 for catastrophic coverage that will not cover this current nerve fiasco) is deducted from my account in the next few days, I will have $128 remaining in my checking account.

Meanwhile x2, I’m currently owed $6,700 from a variety of museums, theaters, arts organizations, art magazines and web sites, for work stretching as far back as January. 2 The check is always in the mail. 3 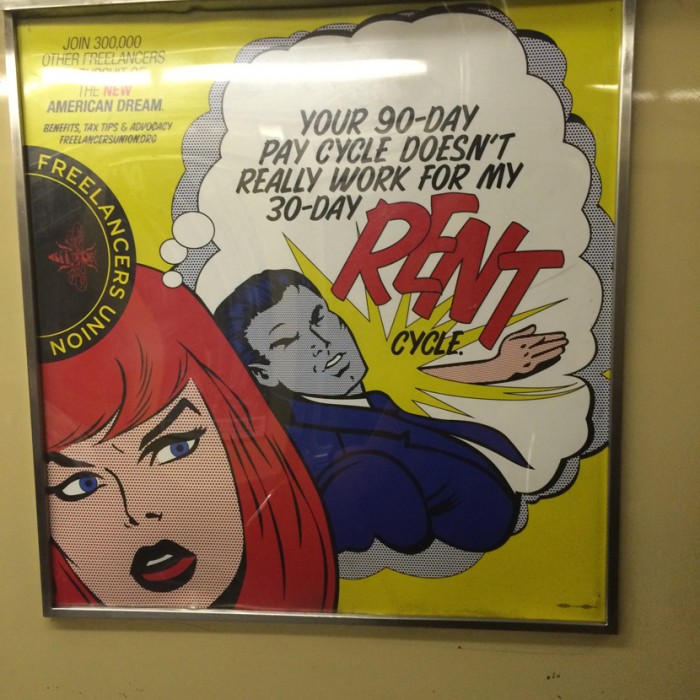 The author, who took this photograph on a C Train in Brooklyn, is not in fact a member of the Freelancers Union, though she does appreciate its subway advertisements.

In other words, now is a tricky 4 moment for me to be thinking about labor.

I remember the bulky, cyborg-like braces adorning the arms of one of my first editors at the New York Times. I was so young. I remember her saying, specifically about women, “When you turn fifty here, you disappear.” 5

I don’t have a day job, but rather a cobbled-together network of contract work and one-offs, which run the gamut from ridiculously pleasurable to mind-numbingly tedious. I’ve been at this long enough that I can ignore — or treat as pro bono if the task tickles me — insultingly low offers from highly designed publications to write lengthy essays. 6 I’ve graduated to the nonstop juggle, freelance hustle. I’m guessing many of you know the drill: pitching the next funder or institution while scurrying to finish the old project and diving into the current one. More and more and more. It’s “The Evangelism Game,” and we’re all expected to play in the arts: “Please explain, in 300 words, how your new XXX will meaningfully contribute to the field.” It’s advanced practice for how to never live in the present. 7

Kraus, again on Acker: 8 “…of course she’s completely aware — publishing a novel once every two years, giving interviews, writing articles, touring two weeks out of each four — that the only way she can possibly support herself as a writer is to maintain being a star.”

It’s easy with all of this to lose sight of the fact that I am paid, generally, to do a thing I love, within a wider culture that doesn’t care very much about that thing. This seems an important point to make, 9 though it can feel like sliding perilously close to that loathsome romanticization: “It’s my passion.”

As if there is heroism in want, or purity in giving it away. 10 “I do it for love.” At any rate, I find myself on the cusp of apologizing. Another way in which women disappear.

I am not a star. I am successful enough that I have the luxury of wondering how I can sustain the level of production that we have all, insanely, agreed is necessary — and which seems to me to be at the root of many of these problems. 11 It seems the Culture Wars really did turn us all into mercenary puritans. We have smartphones. We have student debt. We forget to be amateurs. This is how we “make it work.” 12

What am I going to say? I get off & I still have a body & I still have to eat…but I don’t see writing, nor poverty, as outlaw. 13 I don’t need to convince you of anything. 14 And please don’t forget, I’m being paid to write these words; 15 in this sense, at least, I know that they have value.