< Issue – 4 : The View from Here
The View from Here
Issue – 4
Edited by Claudia La Rocco + Gordon Faylor
These microhistories — all in and of the Bay, give or take — enumerate the local and the particular. They plumb the archive for the body and the body for the archive, unearthing tensions between the collected and recollected, included and excluded, participant and fugitive. They seek to celebrate, to complicate, to reconfigure. The narrator is unreliable, the spectator is emancipated, and the facts only side-eye the truth. 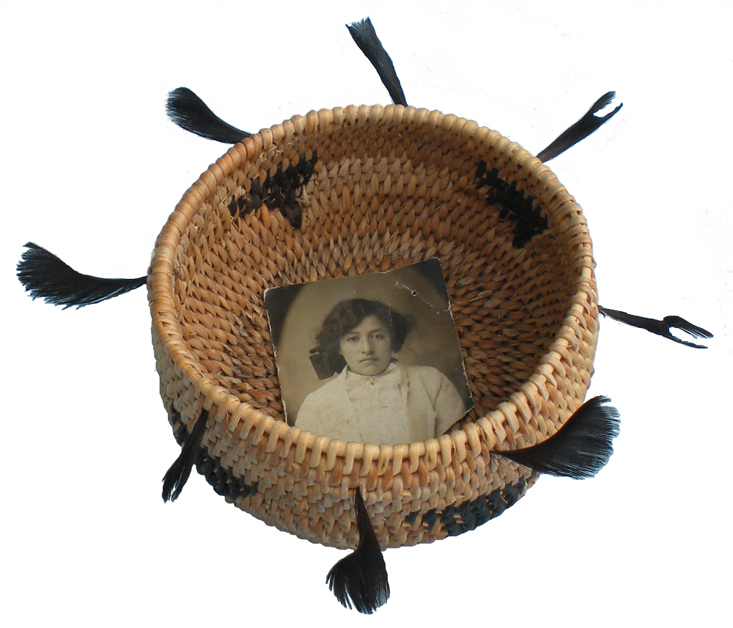 I always knew of my heritage that traces back through time to the Native people of the Monterey area. But I didn’t grow up with the songs, stories, or baskets of my Rumsen Ohlone ancestors. By the time I was born, in 1949, these things had essentially vanished, a result of the Spanish missions and the devastating cultural impacts that followed. Through the generations, many cultural traditions and technologies were abandoned, and by the mid-twentieth century were all but lost.

Our last Rumsen basket makers, born at Mission San Carlos in Carmel, died more than 100 years ago and the old baskets themselves mostly disappeared as well, with only a couple dozen remaining scattered across the world.

Looking back at my childhood, I realize I’ve always been an artist, have always made things with my hands. Family history, too, is important to me, having been brought to life at an early age by the vivid stories of my paternal grandmother. She still practiced the use of medicinal plants, but I began to wonder about the other ways of my ancestors, like language, songs, customs, and technologies of all sorts. The more I wanted to know, the greater the empty place in my heart grew, and the more obsessed I became with finding what was lost. 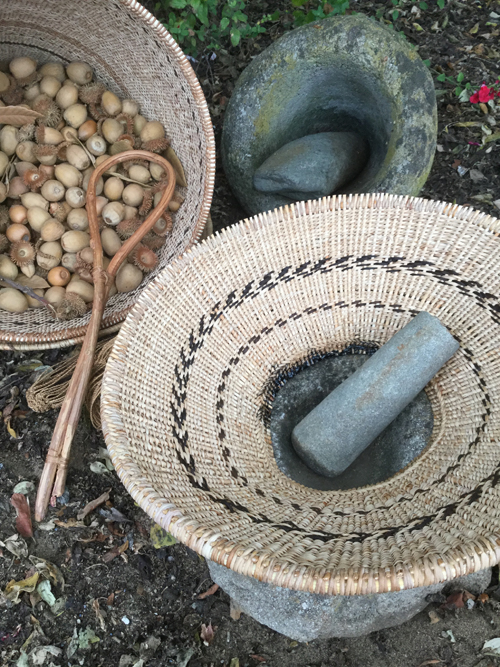 These two work baskets were created with the support of a second Creative Work Fund grant. The bottomless “Pechump Tiprin” or hopper basket, was adhered to a mortar’s rim with a thick ring of tar. The basket holding acorns is a “Shiiwen” or carrying basket. These were the first of their kind to be made in about 150 years. Photo by Linda Yamane.

In my twenties, I was a fiber artist and basket maker, creating contemporary forms and eventually earning a master’s degree in crafts from San José State University. In my thirties, I wondered what our traditional baskets were like, but read that all Ohlone baskets had “perished” and assumed I would never know. Then a random occurrence at an East Bay park gave me hope and a few clues to follow, changing the trajectory of my life and beginning the journey that led me to become a master Ohlone basketweaver. Though I didn’t realize it at the time, I had been in training my whole life for what was about to unfold.

I noticed a poster hanging in a park naturalist’s office, filled with illustrations of baskets. Upon closer inspection, I learned that these were thought to be Ohlone baskets, the subject of a lecture the poster had promoted some years earlier. The locations of these baskets were included, and I realized that this could be the beginning of a journey I had never dared to hope for. I asked to photocopy the poster, and immediately began writing letters to the various museums, requesting any information they could provide.

In the coming years, I visited most of these baskets, and many others, traveling to museums throughout California, to the Smithsonian and American Museum of Natural History on the east coast, and to London and Paris to study the baskets and photograph them. I also found bits of information in ethnographic and linguistic field notes, slowly piecing the puzzle together. I then spent years learning to locate, harvest, and prepare the native plant materials used in our basketry, mastering the painstaking weaving techniques, and making basket after basket. My mind sometimes wrestled with technical information, but my hands always seemed to know what to do. 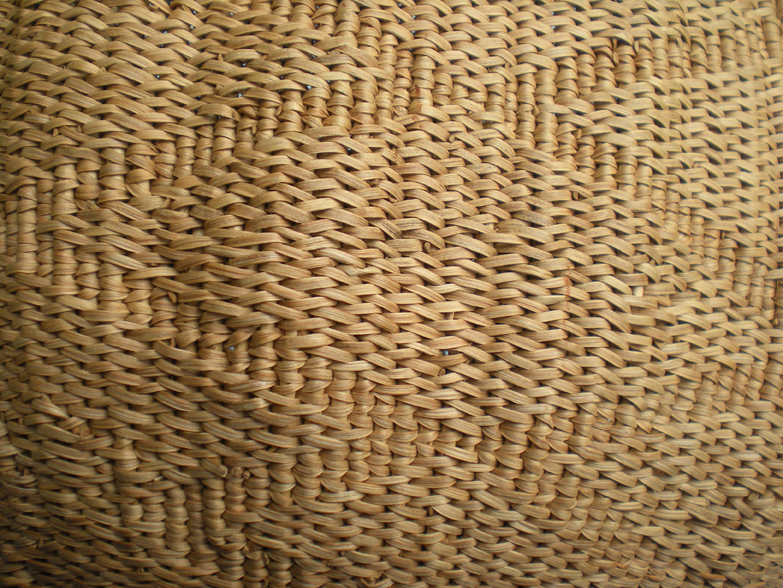 Utilitarian baskets were often made esthetically rich by subtle patterning, as in this seed-roasting basket created by the artist. Photo by Linda Yamane.

My first little basket may look a bit rough to me now, but it represents a major triumph over loss, for it was the first Ohlone basket to be made in probably 150 years. Though my grandma had already passed away, I dedicated it to her and placed her photo inside, where it still lives today. Next, I made a seed-roasting basket with subtle diamond patterns created through an ingenious stitch variation. After that came a small, feathered basket, which taught me the fine art of featherwork. Several years later, I found myself working on two large feathered ceremonial baskets, the first to be made in about 250 years. They were three years in the making, and one of them is now featured at the Oakland Museum of California. The San Francisco Presidio’s Officer’s Club also displays a feathered ceremonial basket commissioned for their newly renovated museum. I most recently completed two utilitarian work baskets, one of them inspired by a stone mortar found near my ancestral village. On its rim is a ring of tar that once held a bottomless basket, like my new one, firmly in place. 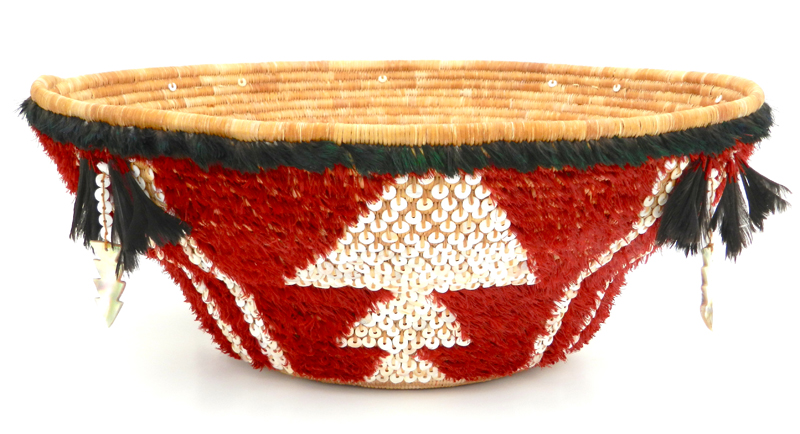 Commissioned by the Oakland Museum of California, this ceremonial feathered basket is now featured in their Gallery of California History. It contains more than 19,000 stitches, nearly 200 willow sticks, and 1200 handmade shell beads. If placed end-to-end, the weaving strands would stretch the length of four football fields. Photo by Linda Yamane.

The process of making a basket in the tradition of my Ohlone ancestors is complex and labor-intensive. I have to gather and peel hundreds of straight willow sticks, dig and process several hundred sedge rhizomes, and bracken fern rhizomes as well, then prepare them for weaving by refining and manicuring each one. The weaving itself is equally meticulous and repetitious, with the basket growing very slowly — stitch by stitch.

The process is painstaking, but perhaps that is why the result is so meaningful. Transforming ordinary native plants into objects of extraordinary beauty is a testament to the resourcefulness and creativity of the area’s indigenous peoples. I hope that my baskets, and the long human history they represent, will help bring honor and respect to my Rumsen ancestors, and to all of the region’s first peoples.