A few times a season, we like to reach out to a current or former Open Space contributor and find out what they’ve been up to. Writer and editor Matt Sussman is a columnist, and last published work here in 2015. 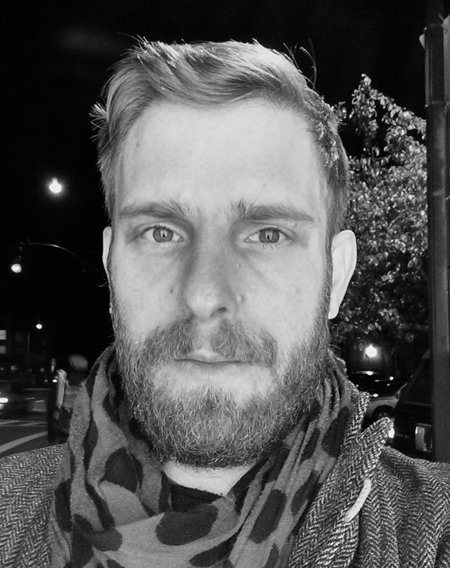 So, Matt, what have you been up to?

I just finished co-editing “Moving Target,” the latest thematic issue of Art Practical, with past Open Space contributor Brandon Brown. We set out to explore the resonances and dissonances between the Bay Area’s poetry and visual art communities through a series of commissioned collaborations between various local writers and artists. Even though we thought carefully about whom we might have work together, we didn’t necessarily have an idea of how things would turn out. The “blind date” aspect of this set-up resulted in many pleasant surprises (for instance, two separate groups of contributors wound up both creating new video pieces). Overall, I’m really happy with the issue — as a set of responses it ultimately pushes past our initial framing and offers an expanded view of what could be as opposed to merely a survey of what is.

I’ve also been writing the occasional review of local gallery and museum shows for Art in America.

I loved the American Gladiators-style gauntlet that Laura Owens’s current show at the Wattis Institute put my senses through. More paintings should talk back to you when you text them. What else? Kate Rhoades gave a surprisingly touching talk on the significance of Whoopi Goldberg’s computer terminal in the 1986 spy comedy Jumpin’ Jack Flash, as part of The Thing Quarterly’s “Things in Film” night at the San Francisco International Film Festival. And although it recently closed, I thought that Vanishing Point at Ratio 3 was one of the smartest and most beautiful installations I’ve seen in a long while. Walking in to the sunlit space, it was as if that lyre-like Fred Sandback piece had always been there, just waiting for the light to catch it at the right angle. I am going to be sad not to encounter it the next time I visit.

Your series “Nothing That Meets the Eye” thought through some specific instances of “our culture of copies, reproductions, and fakes.” Generally speaking, have you encountered any other clones, doubles, or stand-ins of note since then? Or anything that has augmented or expanded your thinking about them?

Certainly, the current presidential race has made me think about the question of false pretenses — in particular Trump’s trajectory from buffoonish novelty act to presumptive party nominee. With each coarse dismissal or outlandish proposal, the feedback loop of disbelief followed by continued attention and scrutiny only grows stronger. Stephen Colbert’s “interview” with an animated Trump avatar was funny because it literalizes Trump’s cartoonish-ness but it also betrays the tenacity of the wish that Trump simply “can’t be for real.” If anything, though, “How could this be?” is a question which Trump cannily seems to have anticipated being asked of him and which he resolutely refuses to acknowledge. To bring things back to “Nothing That Meets the Eye,” I was reading Patricia Lee’s recent book on Elaine Sturtevant’s Warhol Marilyn, and Lee discusses Sturtevant’s work in terms of art historian Carrie Lambert-Beatty’s notion of “parafictional art,” which is neither wholly fictional nor completely as it seems. This seems as good a read on Trump as any I’ve come across. The parafictional certainly describes the realms of reality television and professional wrestling — the hyper-mediated milieus within which Trump forged his persona — but also speaks to the dissimulation that is always at work in politics. Trump is so discomfiting and seductive because he baldly brings those worlds together, forcing a reckoning with their proximity. The results of being “taken in” — to quote Lee’s citation of Lambert-Beatty — by a “trap-laying artist” are not just epistemological destabilization but humiliation. I only hope things don’t progress to the point where our country suffers the latter, even though primary season has offered plenty of the former.

If it isn’t too much of a conflict of interest to state here, I am currently preparing a talk on Jess’s monumental Narkissos, to be delivered at SFMOMA toward the end of the month as part of the 50 Artists program. It’s a real honor, and also somewhat daunting, since it’s long been one of my favorite pieces in the permanent collection and so many amazing folks, from Michael Palmer to Kevin Killian, have already written about it so eloquently.

I can’t think of a better summer movie than Luca Guadagnino’s A Bigger Splash. It’s like if Godard’s Contempt and a Jackie Collins novel had a baby!