Nothing That Meets the Eye: Double Trouble

It is only fitting that I end this series back where it began, in the presence of Elaine Sturtevant’s work. This time I’m in Los Angeles, at LACMA’s installation of Double Trouble, the MOMA retrospective I first caught back in December of last year. 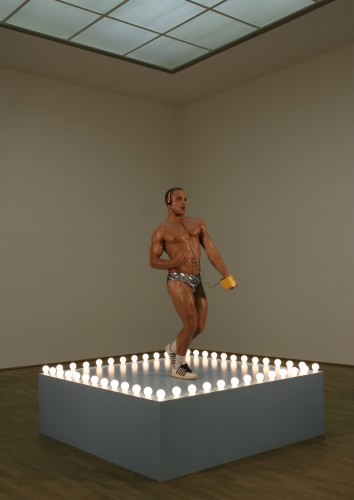 It is only fitting that I end this series back where it began, in the presence of Elaine Sturtevant’s work. This time I’m in Los Angeles, at LACMA’s installation of Double Trouble, the MOMA retrospective I first caught back in December of last year.  Both iterations of the exhibition oddly mirror the general architectural character of the cities in which they’re installed: whereas MOMA’s smaller galleries were chockablock with pieces, MOCA’s larger, white-walled rooms allow them to be more spread out. Walking into the MOMA installation felt like entering a funhouse, your attention diverted ten different ways as flashes of recognition (“Look, it’s a Warhol.” “Look, it’s Beuys.”) gave way to interference (“Look, it’s not-Warhol.” “Look, it’s not-Beuys.”). With only a few pieces to a room, the LACMA installation softens the immediate impact of encountering Sturtevant’s work in the aggregate while allowing the sharpness of particular pieces to become more pronounced.

The wall text next to an untitled 1987 painting after Keith Haring — its content non-figurative but its lines still energetic in a way that is immediately recognizable — notes that it’s one of the first works Sturtevant made after a near decade-long hiatus. (This was a detail I didn’t catch the first time around; I might have even overlooked the painting). The wall text states Sturtevant was weary of simplistic readings of her work that cast it as mere copies or limited their range to, in her words, “reviewing history.” It goes on to quote her as remarking: “People who look at art see it as a detail, a painting or a group of paintings by a specific artist. They rarely see art as part of a total phenomenon. They don’t use horizontal thinking.”

The museum retrospective of a single artist’s work, by its very format, necessarily encourages such a limited appraisal. At the same time, Sturtevant’s art plays off the ambivalence of her phrasing: “a certain artist” could just as well refer to her as to any of the artists whose work her own metabolized. Bruce Hainley (who might be Sturtevant’s greatest chronicler) makes the point in his meticulously researched exhibition catalog, Under the Sign of [Sic.] (2014), that Sturtevant was always thinking horizontally. Her canny insertion of her own practice alongside the practices of her contemporaries — some welcoming (Rauschenberg), others charmed (Warhol), others hostile (Oldenberg) — was not merely a process of imitation. Sturtevant created a destabilizing force field around their work, setting into motion all the elements that made up the “total phenomenon” within which the singular work of art was ensconced and enabled: not only the particularity of one artist’s materials and methods of production, but the larger mis-en-scène of interpersonal relationships, critical debate, and economic transactions within which their art was being made, reviewed, exhibited, and collected.

The challenge I set for myself in this series was to think through replication and its contemporary discontents horizontally, one segment at a time — to account for “what isn’t seen in what you see,” as Hainley puts it, when “what you see isn’t what you see at all” (Hainley, 84). Admittedly, my field of vision has been geographically and culturally limited to American artists and artifacts, many of whom have a particular resonance within the Bay Area. Curiously, I have overtly avoided writing about art on/and/against/after the Internet. I have also demurred from tackling the obvious: globalization, and the resulting circulation and recirculation of knocked-off goods, imitations-on-demand, and authorized copies through foreign and domestic markets. For example, Winnie Won Yin Wong, in Van Gogh on Demand: China and the Readymade (2013) — a book I dearly wish I had had the time to more properly engage with— notes that 90% of the reproduced masterpieces created in the Chinese city of Dafen for export are shipped to the U.S., the copied canvases installed in hotels, law firms, and planned communities or sold at box stores. Globalization too is a total phenomenon — perhaps, the total phenomenon insofar as it aspires toward totality — and from which contemporary art is inextricable, the ether into which the autonomous art object has dematerialized only to rematerialize as something like, but not quite, itself. [1] 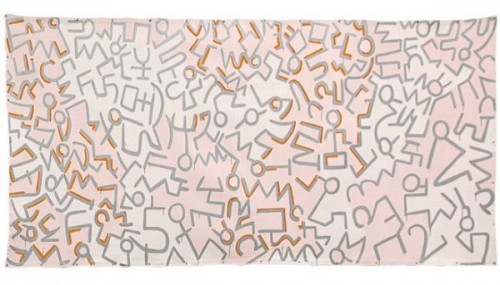 Sturtevant’s art practice can be read as a kind of sonar, used to track the fluctuating coordinates of the art object as it continues to reappear between substance and presence. As such, it is more interested in posing challenges to how we know what we see than it is in overtly drawing attention to the economic or ideological forces which condition ways of knowing or seeing (although it keeps tabs on them too, particularly in regards to the gendered politics of art making). Sturtevant’s signature move—could it even be said that she has one—is to pull the rug from beneath our feet, Looney Toons-style, to reveal the gray void we’ve been standing above all along, what Hainley calls “a rift and/or vantage” (40). Her choice of Haring as the artist who got her back into the game is interesting, then, because within her deceptively simple re-presentation of his work there is an accentuation that is, at least, incipiently political, to the extent that it is underwritten by a certain care.

As with her 1987 painting, Sturtevant’s other Harings are based on pieces devoid of the scenes of conflict, catastrophe or violence seen in much of his more “overtly political” work. More so than with her engagement of other artists, Sturtevant’s Harings are exercises in style which raise questions about the efficacy of encountering Haring’s work in an institutional setting at all, let alone on a refrigerator magnet or T-shirt. The “rift and/or vantage” provided by Sturtevant’s take on Haring reminds us that although his work unequivocally critiqued the ravages of capitalism, its very reproducibility and eventual commodification complicated the clarity of that critique’s broadcast and reception. Harings’s political and artistic commitments were, it turns out, increasingly in tension as he achieved greater success and renown, something which the recent hagiographic survey, Keith Haring: The Political Line, too easily glossed over. Striking a somewhat similar note, Sturtevant’s versions of readymade pieces by another gay male artist who has become inseparable from the AIDS crisis — Felix Gonzalez-Torres — places renewed emphasis on the expectancy and absence that swirled around the originals. Felix Gonzalez-Torres Untitled (Go-GO Dancing Platform) and Felix Gonzalez-Torres, AMERICA AMERICA (both from 2004) are no less poignant for not being attributable to Gonzalez-Torres, whose work often metonymically substituted people with things. Substitutes in their own right, Sturtevant’s versions still make their presence count; her light bulbs, like Gonzalez-Torres’s, also emit heat.

At the same time, Sturtevant’s versions also act as mirrors, reflecting back my personal investments in Gonzalez-Torres and Haring and making me self-conscious about my eagerness to ascribe a political dimension to the care that she clearly took in creating her likeness of their work (indeed, care is evident in all of her work, even when the results are more outwardly irreverent). Do I find Felix Gonzalez-Torres Untitled (Go-GO Dancing Platform) affecting because I find Untitled (Go-Go Dancing Platform) so affecting? Or is it all the more affecting because it serves as a tribute to a dead artist for whom, like Haring, death was political (and, like Haring, whose death was itself political), who strategically mobilized technologies of mass production and reproduction to stage new forms of personal and collective remembrance?

I want to say that the answer is “both”, but that would imply a certain closure that Sturtevant’s art forestalls. Rather, engaging with her work affords me a vantage from which to continually and critically think through why certain artists matter to me, in addition to the recognition, importance or canonization already conferred upon them by their presence in an institution or proliferation within culture at large. Her art throws out given metrics and demands a fresh reckoning with value that takes into account personal significance as well as cultural capital. Gauging the distance between the two becomes the challenge and reward of spending time with Sturtevant’s work, as it has been with writing these essays about the capacity of non-genuine things to elicit very real effects (not the least of which are something as readily mobilizable as emotions). In both instances, this feeling of productive disorientation is perhaps best summed up by John Cage’s remarks about his composition Cheap Imitation (1969), a cheekily titled takeoff of Erik Satie’s Socrate (1919) that doubles as a tribute: “In the rest of my work I’m in harmony with myself […] But Cheap Imitation clearly takes me away from all that. So if my ideas sink into confusion, I owe that confusion to love.”

I’d like to thank the editors and readers of Open Space for giving me the chance to fall out of harmony with my own inclinations and habits as a writer and for being willing to follow along as I sorted through a confusion born of deep affection. My inquiry may have periodically enthused over the fake, but my gratitude has remained genuine.

[1] This is not to overlook the salient differences between Sturtevant’s versions of other artists’ work and the copies produced by the painters of Dafen. It could be argued that however much Sturtevant’s work challenges many commonly held assumptions about modern art, it still issues that challenge from within a “high art” framework, whereas the paintings exported from Dafen are mass market knockoffs. Wong, however, ambitiously makes the case that the work of Dafen painters should be seen as no less than the product of individual artists (as opposed to “merely” workers) who have full agency over their creative production. Why, Wong asks, should these artists be disqualified as such for responding to market demands, when the same could be said of other blue chip businessmen such as Ai Weiwei or Jeff Koons (who also run their studios as factories), simply because there is no big name attached to their output or because they don’t outwardly justify the copying central to their practice by claiming lineage to a post-Duchampian conceptualism?