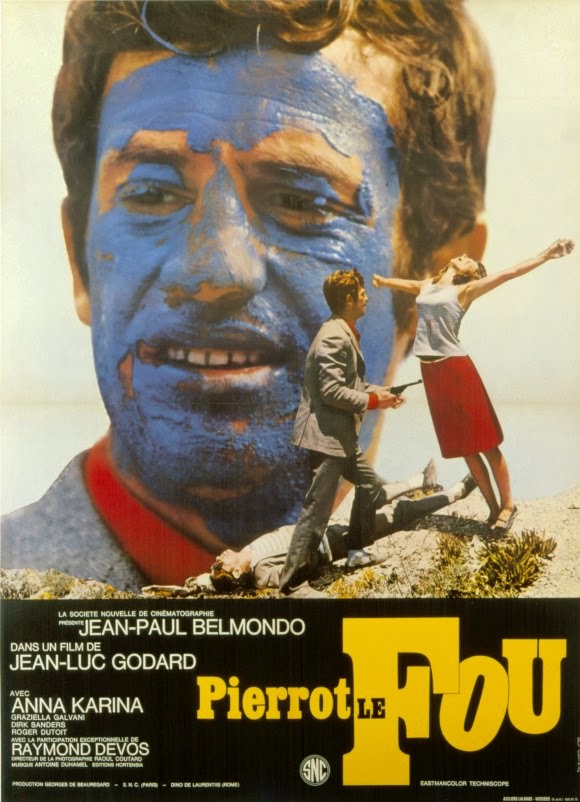 Finally fulfilled my long-held ambition to read Obsession, Lionel White‘s 1962 140-page noir-thriller, which provided the basis for Jean-Luc Godard’s still-astonishing Pierrot le fou a few years later. The only White I’d previously read (some years ago) was Clean Break, which became Kubrick’s The Killing. Remember liking that quite a bit. Have The Killing and Pierrot ever been programmed together as a White double-feature? The man could sure turn out a scenario, as well as modestly intoxicating prose. Another film adaptation of a White was Hubert Cornfield’s excellent The Night of the Following Day, with a still-gorgeous Brando and Rita Moreno. We could throw that into the mix for quite the triple-bill. 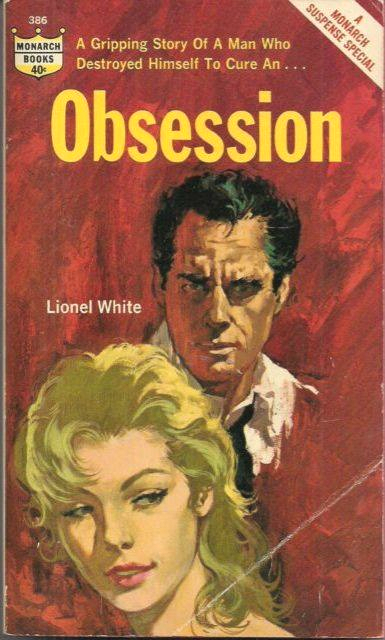 While Pierrot certainly derived its rudimentary narrative elements from Obsession, White’s dark thriller (published in France in 1963 as Série noire # 803, under the title Le Démon d’onze heures) is necessarily a different beast, with little of the whimsy, and semi-surreal Brechtian poetry, and absolutely no comédie musicale. Conrad Madden is a 38-year-old would-be writer who managed to peddle one script for a TV play a while back, but it’s been no dice since. Out of work for months, his relationship with his too-perfect wife dying on the vine, locked into a state of mutual antipathy with his pre-teen kids, he’s ripe for a breakdown, and one soon comes a-courtin’ when, after returning from a party of drunken bed-hopping upper middle-class bores, he drives home the 17-year-old babysitter, and she invites him up to her apartment for a nightcap. Already half-drunk, he’s soon swimming in whiskey and uncontrollable lust. Passion ensues, followed by more drinking, and then he falls and hits his head and passes out. When he comes to, he discovers his wife has come and gone — never to be seen again — and the married friend who’d provided the sitter (one Allie, by name) is making his way into the apartment with his own key, for the fellow has the strong impression that Allie is his girlfriend. This could be a big problem, for he could very well encounter Allie’s other now former boyfriend, who’s lying on the couch lifeless, a meat cleaver sticking from his gullet. Allie’s explained to Conrad she had to put this fellow in this condition when he’d made to slice Conrad up with a knife in his unconscious state. The dead man was a mobster’s bagman, and his personal effects are a small suitcase of cash. The hangover, the greenbacks, and the corpse had inspired a new bout of lust, now interrupted by the married friend, who has to be put to rights by Allie with a flatiron. Implicated in crimes he’s had little or no hand in, consumed with mad passion for Allie, what else can Conrad do but jump in a car with her and the money, and get the hell out of Dodge? 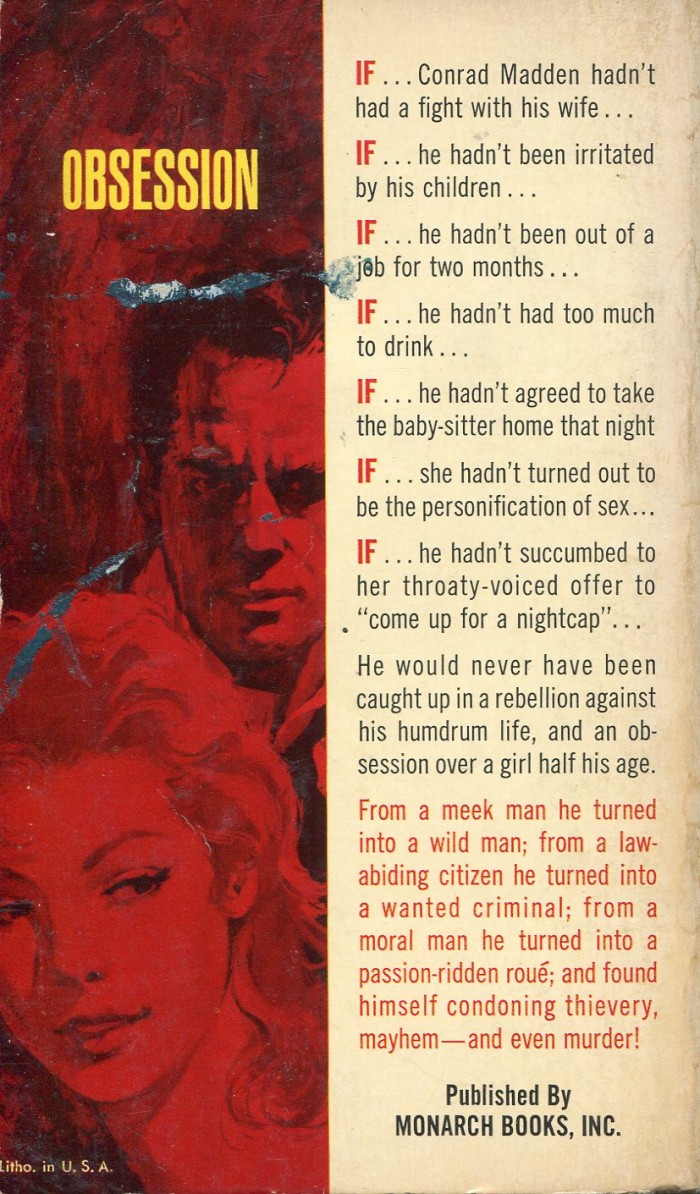 Back cover of Monarch Books’ 1963 paperback edition of OBSESSION.

Pierrot‘s many passionate fans will recognize pretty much all the above details, or variants thereof, deployed in the film’s opening, only tossed off lightly, with a deft, poeticized absurdism. The key differences, of course, are that Pierrot‘s Ferdinand/Pierrot and Marianne are much closer in age, and already have a history together: lovers in the past, they’d been torn apart for reasons undisclosed, which will no doubt feature in their tragic future. Love, not lust, is the important thing for Godard at this point, and his renderings of carnality are potent, but nonetheless tinged with a puritanical judgmentalism. But White’s barely tossing off fuel for tossing off, either: his sex scenes, if suggestive, are, at most, sketchy. His Conrad Madden is obsessed by the moment, for apparently for the first time in his life, he’s found himself matched with a long-lusted-for wanton. Allie’s desirous at virtually all times, and seemingly takes her pleasure with total abandon and ecstasy. She also takes endless delight in the joys of music, arcade games, gambling, and peanut butter sandwiches. A pathological liar, she might also be a bit of a simp; she’s definitely shielding some hidden horrible past which she refuses to divulge. In times of stress, she either reverts to the manner of a traumatized child in shock, or turns psychopath. What’s not for Conrad to love? Every man wants a woman to save. He alternately shields and pursues her from their starting point of Connecticut, through Baltimore, South Carolina, Miami Beach, Las Vegas, and finally into the Nevada desert. Marianne’s death at the hands of Ferdinand is painful, but poetic. Its origins lie in Obsession, in an ending rawer, and even a bit shocking, like a porny version of the climax of Otto Preminger’s Carmen Jones, if you know what I mean.

Godard by all means transcended his source novel, but throughout Pierrot, there are regular, if not constant references to it. Typical of JLG, he puts Obsession into his aesthetic blender along with his other assorted ingredients. Little tasty flakes of Obsession are distributed liberally through Pierrot, and I’ll detail some of them here: Marianne more than once mentions going to the likes of Miami Beach and Las Vegas, and there’s also mention of a “Las Végas bar at Toulon.” Allie talks of meeting up out west with a “brother” who’s most likely not a brother at all. Marianne also has a “brother” she wants to hook up with, and when we finally see him, he syncs up fairly well with the one in Obsession: “The man was thin-faced, dark, with long, beautifully combed hair. He had dark, intense eyes, a thin nose, and delicate, almost effeminate lips.” No, not exactly Marianne’s Fred, but close enough. (Interestingly, some names are changed to sound more typically American: “Mel” becomes “Frank,” and “Joel” “Fred.”) Anna Karina has claimed she came up with Marianne’s poodle-purse as a reference to Shirley MacLaine’s similar one in Vincente Minnelli’s Some Came Running, and this could be the case, on some level, at least. Karina understandably admired MacLaine’s performance, and Godard had previously made direct reference to Some Came Running in 1963’s Contempt. But the poodle-purse’s origins lie first in Obsession, in which Conrad buys Allie a miniature French poodle as part of the “classy” accoutrement with which he’s attempting to disguise her. But get this, Minnellians: they rename this male poodle “Gigi” (!!) to up the chic factor. The origins of all the many outsize walkie-talkies in Pierrot seem to lie in a deluxe custom ham radio outfit built by Allie’s “brother.” Allie makes with all manner of deadly weapons, with scissors being alluded to at least once.

The sequence in Pierrot in which Ferdinand is lured by Marianne via telephone to an apartment, only to find her absent, replaced by a reception committee of goons who make ready to waterboard our poor Pierrot, has its roots in a much more brutal one in the White, which even features waterboarding in between knuckle sandwiches! (No doubt my fellow Godardians assumed, like me, that this was just a reprise of the scene in Le petit soldat.) Pierrot‘s fractured semi-climactic heist, involving a motorcar chase, murder, and a valise jammed with currency, is based on a similar robbery of casino cash in Obsession, only Godard spoofs it up, rendering it both delightfully absurd and incomprehensible to all those who haven’t read White’s novel. Godard has laced Marianne’s character with shadowy right-wing politics involving gun-running, but her line, “I just want to live, but he’ll never understand that,” could’ve been spoken by the apolitical Allie. When Marianne upbraids Pierrot — “We’ve played Jules Verne long enough! Let’s go back to our gangster movie, with fast cars and guns and night clubs” — the world she yearns for is Obsession‘s. Obsession features a Cessna, transformed in Pierrot into all its many boats. The atmosphere of Pierrot‘s bowling alleys, auto garages, and the like, also seems to come from White, who, for example, has Allie picked up by a pimp at a roller-skating rink. A more direct transmutation is the whole Ferdinand/Marianne book/record dichotomy. Even at least one major Godardian maxim has its origin in White: “Leave a woman and she’ll claim you’re crazy,” comes from Conrad Madden observing: “A wife always apparently feels that when her husband finds some other woman attractive enough to sleep with, he must be suffering from some form of mental disorder.” Typically, Godard parodies, abstracts, and politicizes, but Marianne’s description of women’s violent potential could be an articulation of the semi-incoherent Allie’s ethos: “It’s easy for a girl to kill a lot of people. There’s no reason why soft breasts and thighs should keep her from killing everybody to stay free or defend herself. Just look at Cuba, or Viet Nam, or Israel.” 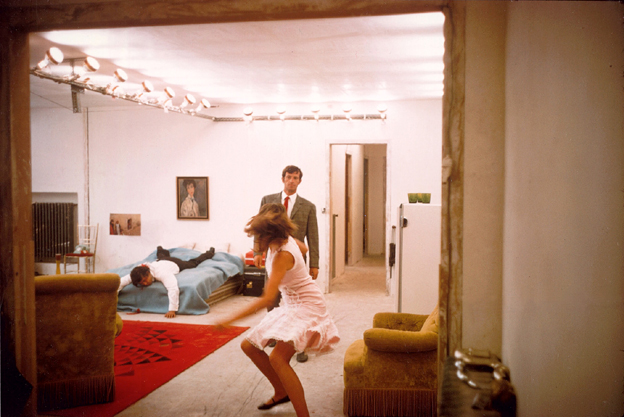 Godard gives White the tribute of naming the American astronaut who jams a Coca-Cola in the mouth of the man in the moon after him. Meanwhile, White has already laid groundwork for allusions, when, early on, his Conrad Madden says “I’m beginning to feel like a character in a Francoise Sagan novel.” Preminger’s adaptation of Sagan’s Bonjour Tristesse, starring Jean Seberg, lead to Godard casting Seberg in Breathless (as a character conceived on some level as a continuation of the one in Tristesse), and hence, in some sense, also leading to the beginning of Godard’s whole film career. The connections circle back into themselves endlessly. O, the wheels within wheels of this obsession fou….

This post has been helped by input from Joe McElhaney and Corey Creekmur.