A few times a season, we like to reach out to a current or former Open Space contributor and find out what they’ve been up to. Artist, curator, and teacher Taraneh Hemami is a columnist, and published work here in 2013.

So, Taraneh, what have you been up to lately?

I just published the first edition of Bulletin, an ongoing research project that traces a timeline of contemporary Iranian and international resistance histories from the printing of the first newspaper in Iran in 1846 to the Iran Deal in October 2015. Bulletin is a Theory of Survival project; Theory of Survival itself began almost a decade ago during my residency at the Center for Art and Public Life at California College of the Arts (CCA), when I first encountered a historical archive belonging to the library of the Iranian Students Association of Northern California (1964-1982). It’s also the culmination of my recent residency with Arts at CIIS (California Institute of Integral Studies). Bulletin is produced as a zine in homage to the many publications by ISANC in Berkeley during those critical years between the CIA coup and the aftermath of the Iranian revolution.

Recently, I had the privilege of watching the locally produced film Radio Dreams, a funny and profoundly touching portrayal of Iranian communities in diaspora, particularly in Northern California. The amazing musician Mohsen Namjoo portrays a frustrated and disillusioned director of programming at a fictional radio station in San Francisco, whose slogan is “Bay Area’s No. 1 Farsi-language broadcaster, Pars Radio.” He fights an everyday battle to create his cultural programming on a shoestring budget, while being constantly undermined by the entrepreneurial aspirations of the station’s resourceful owners. Butimar Productions‘ Marjaneh Moghimi weaves together a masterful and collaborative film, bringing together artists from across the Iranian Diaspora — including director Babak Jalali (London) and writer Aida Ahadiany (Toronto) — while showcasing many members of the Berkeley-based Darvag Theater Group. Radio Dreams won the Tiger Awards after its first screening at the International Film Festival in Rotterdam, and will have its US premiere at the SF International Film Festival this spring.

I was especially thrilled to visit the mythical 500 Capp Street, as well as David Ireland‘s exhibition at SFAI, which honored and will help preserve the influential works of this pioneering Bay Area artist. I look forward to seeing the inaugural exhibition of Border Cantos at San Jose Museum of Art (February 25-July 31), in which Guillermo Galindo creates musical scores for a number of handmade sculptural instruments made from discarded objects he collected over the past two years along the US-Mexico border with his collaborator, the photographer Richard Misrach. The project imagines complex immigration narratives as visual and musical compositions that utilize remnants of bones, shotgun shells, rusted aluminum cans, and decaying pieces of clothing, among other items.

The Bay Area is also celebrating its history of dissent this spring with Take This Hammer, curated by Christian L. Frock for the Yerba Buena Center for the Arts (March 11-August 14); and there’s the international Open Engagement conference Power, held this year at Oakland Museum of California, in conjunction with the exhibition All Power to the People: Black Panthers at 50.

Finally, Evidence of Things Not Seen by Hank Willis Thomas has just opened at Kadist Art Foundation. The first exhibition by the artist in the Bay Area in ten years, it is a powerful selection of recent works addressing the complex and layered topic of race and its reflections in American society today. The exhibition challenges audiences to interact and engage with the difficult subject in several photographic and video installations, exposing invisible truths, and using flash to photograph the otherwise mostly white-on-white images, obliterating symbols of hate like the South African neo-Nazi party Afrikaner Weerstandsbeweging’s flag (“Black Righteous Space: South African Edition,” 2014).

In 2011, you reported on protests and controversies surrounding art establishments and events in the UAE. In your own practice — via a project like Theory of Survival, to name one — you use materials and/or data from the Middle East to generate “creative exchanges” between artists and scholars, among others. Can you talk about how your work as an educator influences or affects your work as an artist, and vice versa? And, by extension: how do you think about activism functioning in the purview of art?

With the ongoing conflicts in the Middle East and the tension between the US and Iran over the past few decades, it has become important to me to use the platform of my artistic practice to try and unravel the complex histories of the region using a multiplicity of voices and collective processes. My research and collaborative projects are directly influenced by my work as an activist and educator. Over time, my different roles have increasingly merged into one large practice, adapting methodologies that are informed by one another.

For the next phase of Bulletin, I hope to create a multi-layered interactive digital archive of the collected data to allow for a wider reach across these contemporary histories and personal narratives. I will be inviting participation from a diverse group to contribute parallel histories and add missing stories to its ever-evolving archives — exploring ways they connect to and inform our complex present-day global society.

Fabrications, a pop-up bazaar drawing inspiration from a traditional Persian marketplace, continues to invite artists, scholars, and activists to engage with Iranian political, cultural, and historical moments. A Creative Capital project, the pilot phase of the project was exhibited at Southern Exposure in fall 2014, collaborating with California-based artists and scholars.

I am thrilled to be have Heroes Martyrs Legends exhibited as part of The Human Spirit at Richmond Art Center, which celebrates fifty years of Bay Area figurative traditions. 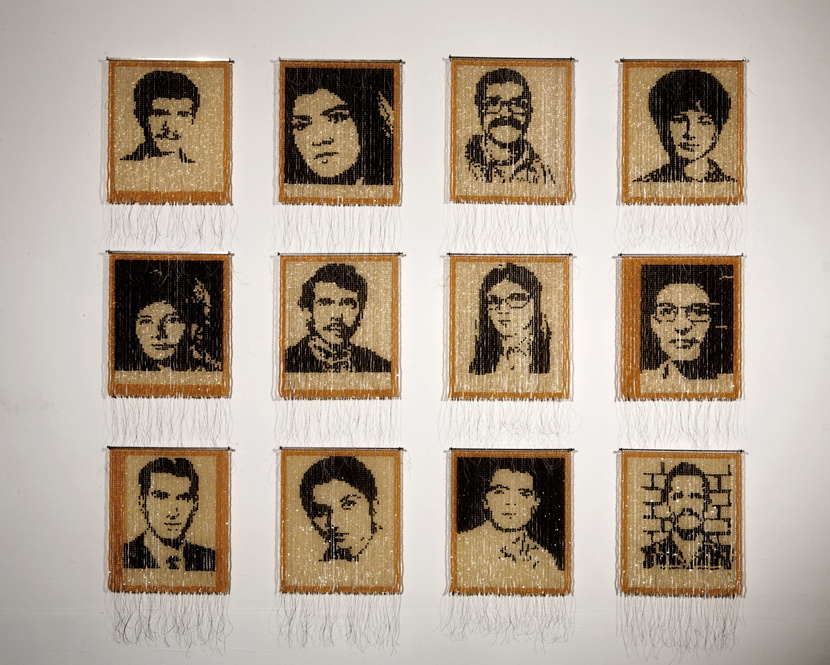 I will also be presenting Theory of Survival on the panel “Art as Archive, Artist as Archivist,” on March 25th, as part of Animating the Archives symposia on Iranian Cultural History at NYU.

And for my first solo exhibition in Tehran at AG Gallerie (May 13- June 3), I will be reinstalling Ruins: Hall of Reflections. The installation was initially created for the 6th Sharjah Biennial in spring 2003, as a response to the relentless bombing of Baghdad that began the war in Iraq and the displacement of millions that followed. 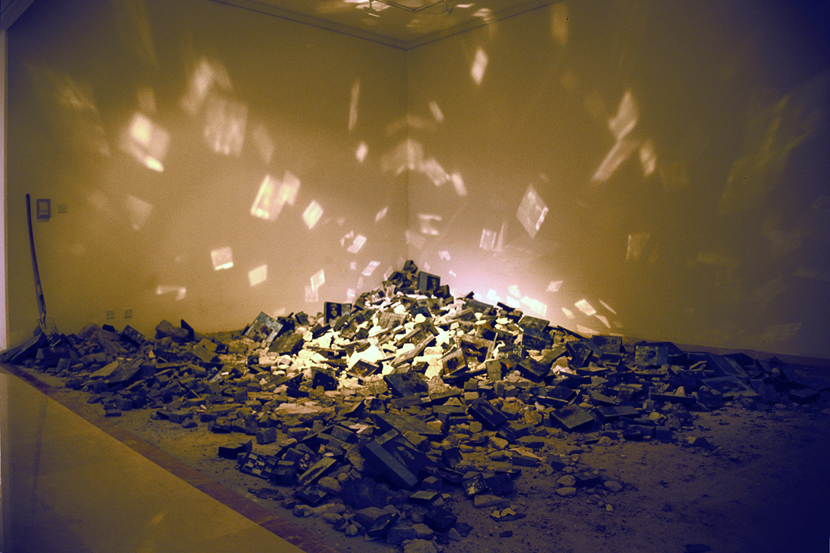 I have been working on a new series of photographic assemblages, Absence, which serves as a meditation on the spaces between “belonging,” whether from within or at a constant distance. Cutting out bodies — individually or in groups — from interiors, landscapes, and cityscapes of collected personal photographs, what remains are multi-layered fragments of place, intimate or public: a classroom, a backyard, a bridge, a brick road, a wall, the sea. It will be part of the exhibition Between Worlds at Arc Studios and Galleries in San Francisco from July 9 to August 13. 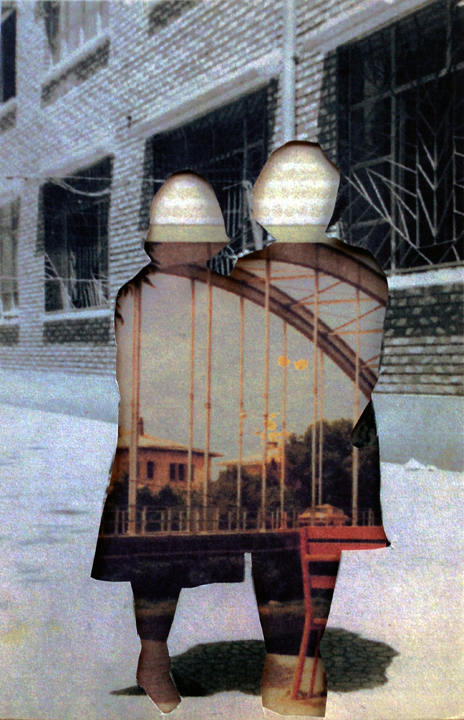