From UAE to USA 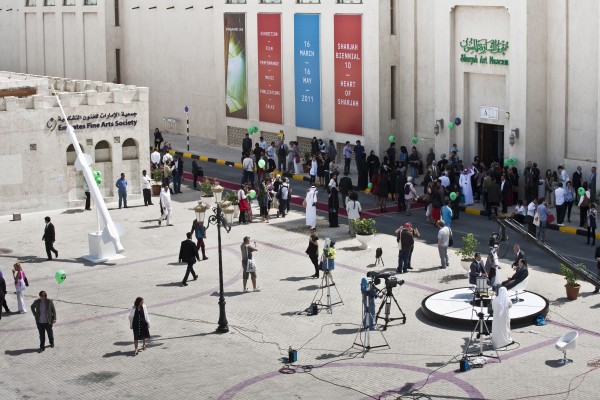 I am very excited to have the opportunity at Open Space to feature some of the artists I was introduced to in United Arab Emirates where I recently  presented my Theory of Survival project at the Sharjah March Meetings (March 13-15). Also organized by Sharjah Art Foundation, the 10th Sharjah Biennial, entitled Plot for a Biennial, opened on March 16th with 65 specially commissioned works on view till May 16 , while a short distance away in the Emirate of Dubai,  ArtDubai opened with over 80 participating galleries (March 16-19).  Victoria and Albert Museum’s  Jameel Prize shortlist of artists was announced, the Abraaj Commissions  and Delfina residencies at Al Bastakiya were unveiled, while the Global Art Forum and Bidoun curated ArtPark projects, created an active art playground for over 20,000 viewers.  I was inspired by many projects and publications presented that engage with the “region,” which everyone has a difficulty pinning down, MESANA region (Middle East, North Africa, South Asia) and soon to be added perhaps Central Asia; countries that are linked historically, and have become centers of conflict in the recent decade. There has been much written up about the exhibitions in the past few weeks and more will surely be published as many international curators and journalists were courted from Doha to Dubai, Sharjah to Abu Dhabi, to reflect on the developing art scene.
This was my third time in the Emirates, beginning with participation in the 6th Sharjah Biennial in 2003 (April 8–May 8), installing during the two weeks of the heavy bombardment of Baghdad to “shock and awe.” Last year participating in exhibitions at the Al Bastakiya Art Fair, and ArtDubai, the main conversation centered on the heavy hand of the Iranian regime in response to spontaneous uprisings after the 2009 presidential elections. Participating in the March Meetings this year organized by the Sharjah Arts Foundation, the main focus became the movement of dissent in the region, while the 10th Sharjah Biennial, also organized by the foundation, was dedicated to the spirit of change in the region. After three full days of presentations at the March Meetings, with the first invited opportunity for dialog about the unrest across the region, a few participants responded to the announcement of Saudi Arabia and United Arab Emirates on March 15 to sending armed forces to help with Bahrain’s king’s brutal crackdown of the demonstrators (Reuters). A simple act of remembrance, a list of names of the Bahrainis killed in the recent conflicts was printed to be distributed silently among the audiences at the opening of the biennial the next day. Although no more than a handful of papers were distributed, one of the artists was arrested and detained for questioning by authorities for several hours, while the curators and organizers of the biennial had to get involved for their release. Living outside the region it is easy to forget the repressive nature of the regimes where no act of dissent is tolerated, even (or perhaps especially) in an art context.

A larger protest was announced on March 18th, with a team of over 130 artists, curators, and writers, organized by Emily Jacir and Walid Raad in cooperation with the Human Rights Watch, boycotting the new Guggenheim Museum in Abu Dhabi over labor practices in the construction of the building. The 2009 Human Rights Watch report “The Island of Happiness” documents “a cycle of abuse that leaves migrant workers deeply indebted, badly paid, and unable to stand up for their rights or even quit their jobs.” The artists have been in conversation with the organizers at Guggenheim since 2010 with little actual affect, and felt they had to act now while the museum is building its collection, which would not be meaningful without well-known artists in the group like Shirin Neshat, Mona Hatoum, Akram Zaatari, Yto Barrada, Kader Attia, and others.
Politically charged, the exhibitions at Dubai and Sharjah become a collective response to the complexities of the times; the wars, the destruction, the boom, the continuous shifting landscape, the perplexing politics. And in spite of the limitations imposed by the ruling parties in the Emirates in the political discourse it allows, they are the only opportunities available for a much needed space for dialog, offering artists, scholars, and writers of the region and its diaspora a temporary space for creative exchange. The constant struggle for freedom of expression in the region is also evident in this year’s highly provocative “Plot for a Biennial,” where artists were invited to engage with charged concepts including “treason, necessity, insurrection, affiliation, corruption, devotion, disclosure, and translation”. The most recent casualty of the tight grip of censors over the biennial is Jack Persekian, director of Sharjah Art Foundation, who was dismissed by direct orders of Sheikh Sultan bin Mohammed, the Ruler of Sharjah, on April 7th, following controversy over Algerian artist Mustafa Benfodil’s use of  sexually explicit Arabic slogans and poetry as part of his installation at the Sharjah Heritage District. The installation has been removed from the biennial, which is on view through May 16th. 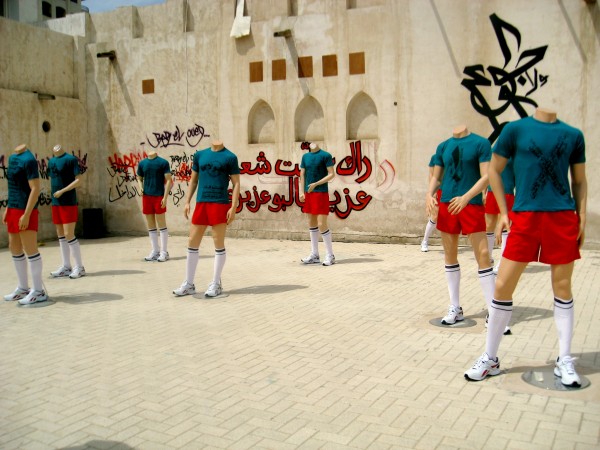