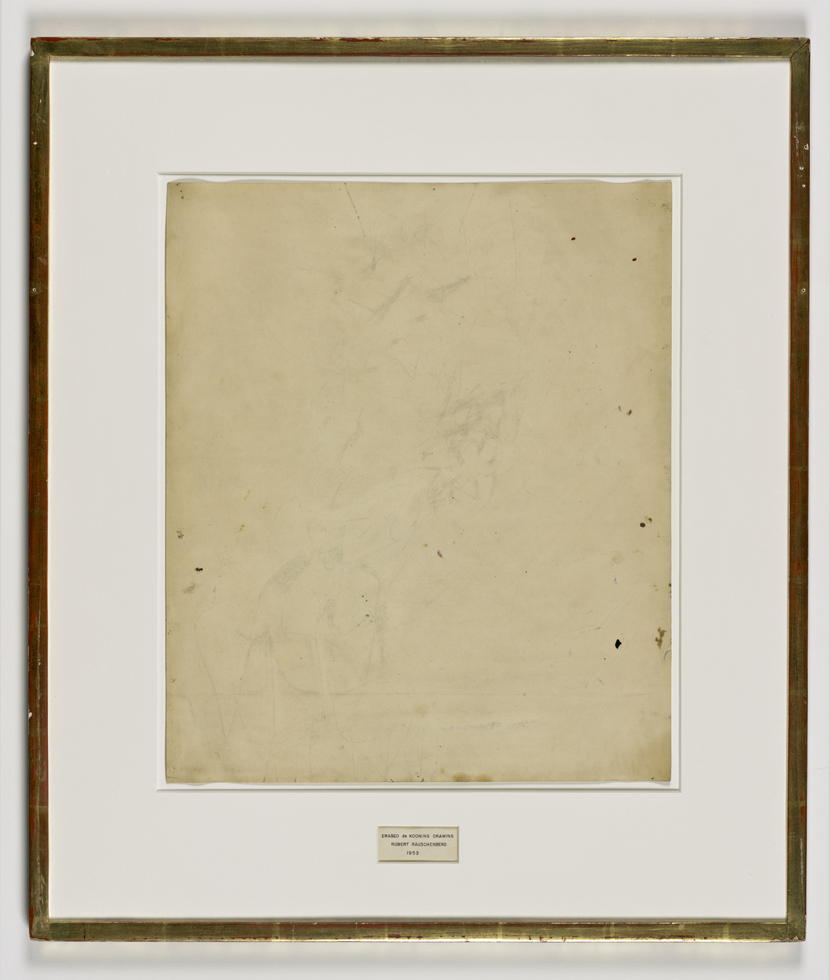 Erased de Kooning Drawing isn’t much to look at, but when we ship it to other museums for exhibitions, their staff members flock around with anticipation to see the fabled work emerge from its crate. Visitors to the museum who are familiar with its fascinating backstory look for it in the galleries with a similar eagerness. And then they get their first look. Oh. It really IS an erased drawing. You can almost hear the thud when the realization registers. All there is to see is a smudged piece of paper in a thin gold frame. 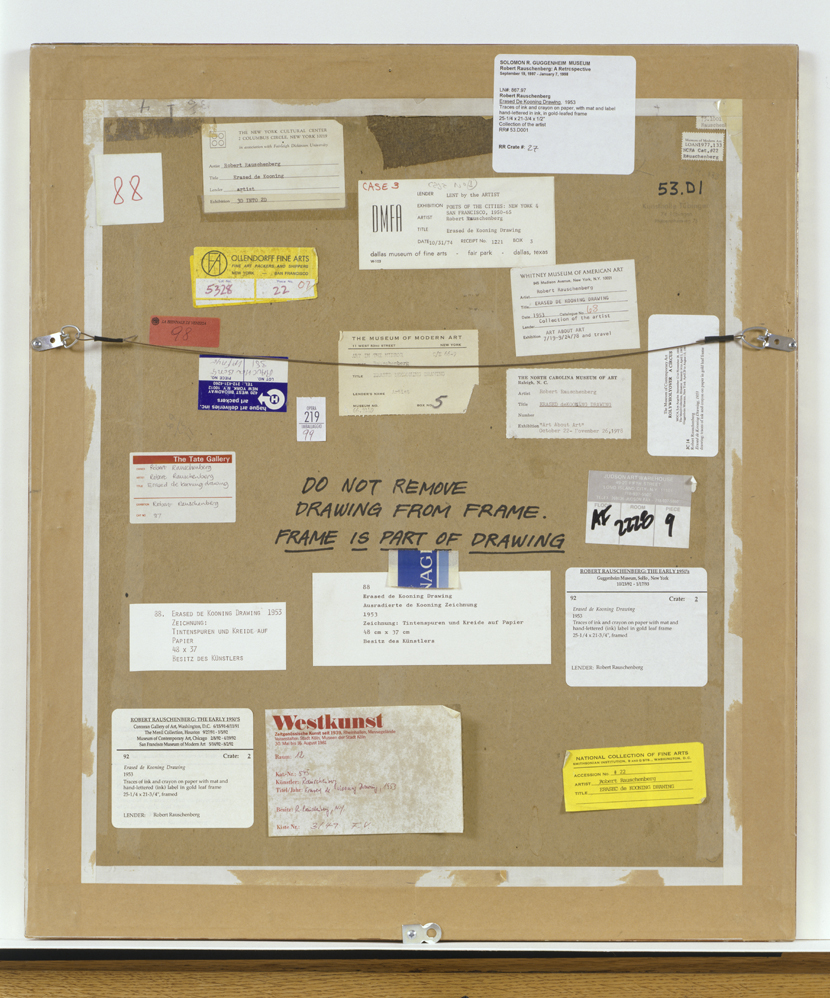 Flip the work around, though, and there is a lot to see–dozens of exhibition labels crowd the back of Erased de Kooning’s frame. And read its full exhibition and publication history: it’s clear that this unassuming object is much in demand. In fact, of all the 30,000-plus works in SFMOMA’s collection, it is easily the most requested for exhibition and reproduction. It has appeared in more than forty articles, essays, and books in print and online in the last five years alone, and it is typically requested for two to four outside exhibitions each year. As the current owners of the drawing, we at SFMOMA field those exhibition loan requests, assess their merits, and consider the proper balance of ensuring that this work continues to travel the globe while keeping its light-sensitive paper safe from too much exposure.

I hesitate to even use the word “owner.” Yes, the work has been acquired by this museum. But what exactly do we own? To my mind, a host of people can and should claim ownership of Erased de Kooning. First, and most obviously, it belongs to Bob Rauschenberg. It was his idea, audacity, and approach to making art that brought EdeK into this world. Jasper Johns, who helped label and frame it, owns a piece, too, in my book.

What about all the critics, curators, and art historians who have cumulatively bestowed upon Erased de Kooning Drawing its iconic status? In the sixty-odd years since its making, EdeK has been included in exhibitions and publications on the following subjects, among many others: the figure, minimalist aesthetics, the legacy of Marcel Duchamp, the demise of painting, Conceptual art, American drawings, and Beat poetry. With so little to see and such an important behind-the-scenes story, the drawing depends on these discussions and contexts for its meaning. So surely those who have written about and shown the drawing in the past own some part as well.

Now that EdeK lives at SFMOMA, the curators here (including me) continue to add layers of interpretation by showing it with a range other artworks and writing the texts that accompany it on our gallery walls. By approving or denying loan requests, we also exert a measure of control over the outside exhibition contexts in which it can be shown. On some level, then, what the museum “owns” is simply this moment in time with the physical object and a right to frame the stories that are told about it when it is on view at SFMOMA. We own the opportunity to pursue our curiosity, ponder the narratives we have inherited, and insert a few sentences in a dialogue that will continue long after we move on.

To be sure, having Erased de Kooning in SFMOMA’s collection affords us greater opportunities to show it and gives us responsibility for its physical well-being. But in the end, it’s a fairly narrow kind of ownership. As the exhibition labels suggest and a Google search proves, Erased de Kooning leads a much bigger and faster-paced life outside the museum than it does inside. It is out there, challenging old histories and generating new ones. It appears in newspapers, textbooks, blogs, essays, journals, and even commencement speeches.  It pops up on Flickr, Instagram, and Facebook in an endless stream of creative responses and repurposing. It inspires other works of art, poetry, music, and film. Like the best of art in any medium, Erased de Kooning belongs to everyone and no one.