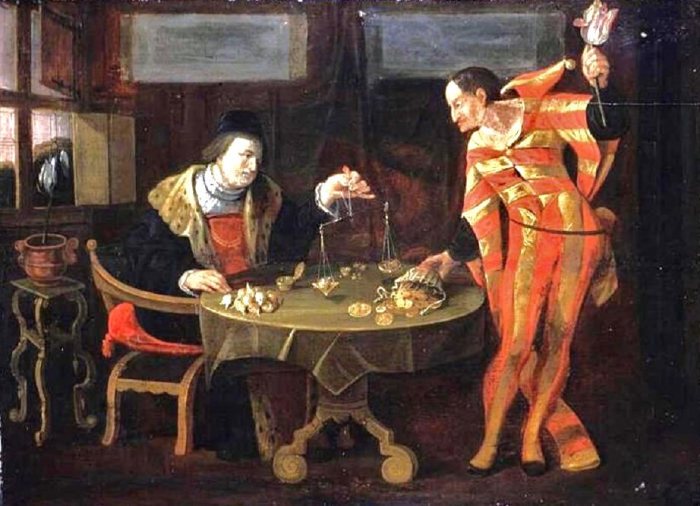 Something from Nothing—Creating Value: Shotgun Weddings of Art and Business

There has been a radical shift from the alternative origins of many decades-old and recently founded non-profit arts organizations toward more commercial methodologies and values. Auctioneering is one emblematic activity that embodies this larger shift, where bottom-line numbers prevail, causing works of art to get pegged to their (arbitrarily defined) monetary worth. Those same values have become significant enablers and defining characteristics for organizations that were once hailed as alternative, as they provided unconventional and unpredictable renovations and challenges to the homogeneous, conventional and pernicious aspects of an already established, dominant culture.

The proliferation of auctions on behalf of non-profits in recent years could be seen as a win-win-win, since organizations benefit from the largesse of patrons who support them by acquiring new works of art in exchange for their cash; the artists’ works get seen and (in some cases) purchased for (usually private) collections; and the world of culture can be said to expand by the sharing of these works of art exposed even to the view of mere “lookie-loo” attendees. But making it all about the numbers is not just peddling the same game that commercial enterprises undertake (thereby losing any claim to creating an alternative to an already brutally over-determined commercial system), it defines and measures value itself in terms of finance. Art obviously works well as a token in that game, but in being so deployed, it loses the cultural difference that can be generated by its… difference. The high-minded rhetoric of art as “innovation” or cultural “research and development” rings hollow then, and ultimately, at best, reflects the status quo culture of money. Moreover, the commercial orientation of art helps enable, perpetuate, and even accelerate some of the most self-serving and questionable aspects of the larger culture.

Sure, smaller organizations share the ”goods” with artists and audiences from the perhaps not at all ill-gotten gains of benefit auctions. But to do so they have to participate in a capitalist enterprise that way more often elevates a small number of star artists, the perceived value of whose work becomes artificially pumped up, and for whom attention becomes insistently channeled. This crowds out possible awareness of a wider field of artists and what their ideas of art might be. Such hyper-vetting happens both on the part of gallery spaces and in the various media channels that attend to such things. Auctions and sales, of course, account for a big proportion of that kind of attention. At least one online auction company now has a policy requiring an estimated minimum of six figures for an auction’s gross before they will promote auctions for small organizations — and they actively suggest to the would-be benefiting organization a list of likely artists to target for solicitation of work, based on already established sales. This is a cultural system feeding on itself and ever-narrowing its already-recognized collectibles in order to generate more cash.

My own experience with auctions includes not just the blurred, passive viewing of invitation after invitation to benefit auction events piling up in my inbox each season, but the direct participation in such schemes as an organizer soliciting the products of artists’ labor either directly from artists themselves or from their gallery representatives, while acting on behalf of multiple organizations over the years. Don’t get me wrong: artists and galleries have been extraordinarily generous, and so have collectors, including more casual collectors looking to share in the hits of pleasure that can strike every time they look up from their desk or dinner party to revisit an evocative image taken away as booty from a auction site and re-installed on their walls at home. Pride of ownership is obviously one thread of appreciation that co-mingles with even the most gregarious impulses for sharing the pleasure in works of art. But what can we seek beyond “possession” and an inflationary scheme related to particular works of art by a limited pool of already valued artists? 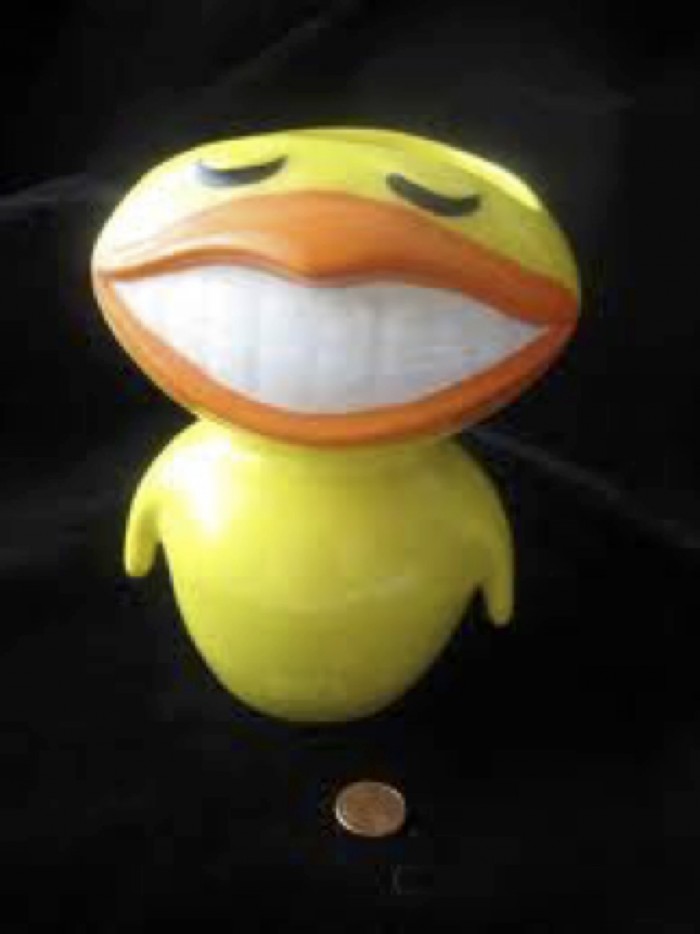 Interlude: Inflated Values of a Cultural Craze (or How Many Tulips Can You Buy with One Bitcoin?)

The inflation of value is, of course, part of the human species’ behavior for (over-)accumulating cultivated objects. Witness Dutch Tulip Mania, and this more recent project aimed at creating value in ordinary objects through storytelling (as illustrated through the smiling creature above from the Significant Objects show at MOMA). The fact that much of the capitalist system we humans have become so entirely captive to is based on this sort of irrational exuberance of speculative bubble-making — and never forget, always at the expense of others — should hasten us to consider all the more how value is created in these especially rarefied economies of art world gewgaws. 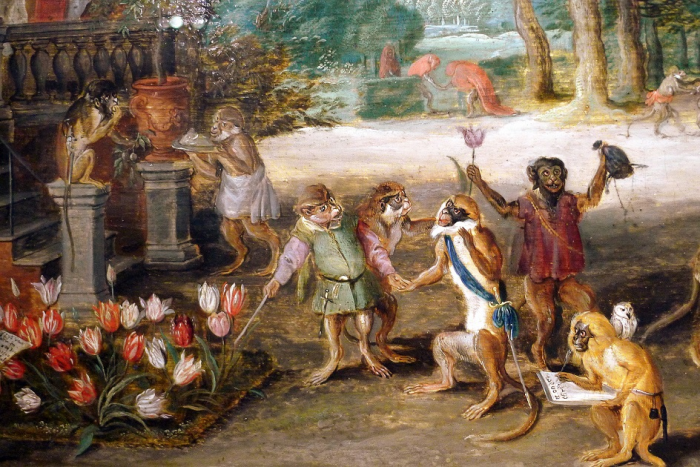 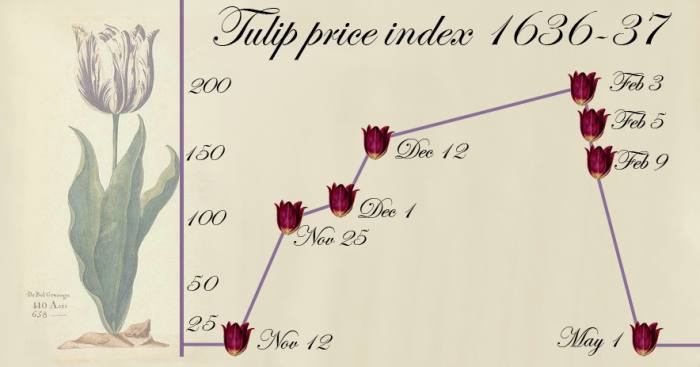 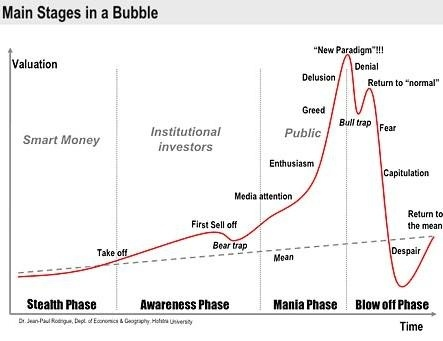 As one alternative, could we not convert the energies and attention that go into such singular moments of auctions themselves (usually a half-hour or so of actual live bidding, following weeks of online lurking and offers, and months of preparation on the part of the organization) by turning the individual purchase and possession of works of art into the collective enterprise of art clubs or subscription models? Where the same amounts of cash could be solicited and works of art distributed in endless circulation: monthly meetings where not only were works of art from a replenishing pool shared among individual members, but other kinds of exchange promoted in just such gatherings, like conversations about values other than the monetary. The work you took home last month becomes the conversational substance for this month, and then you pick up another work or works for another round of temporary cohabiting and contemplation, leading to further conversation and social exchange in the next round — an accumulation of knowledge-wealth and conviviality rather than mere property. And with each round of exchange, the artist could receive an additional percentage of the cash that is flowing as part of these larger currents of exchange. 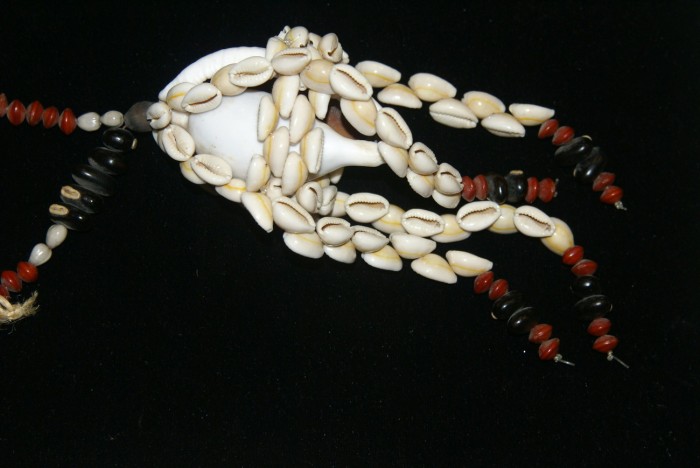 The Kula Ring, famously explicated by anthropologist Bronislaw Malinowski in the 1920s in the South Seas’ Trobriand Isles, traces a similar cultural pattern of keeping folks — in this case often separated by great distances of sea — in touch through just such a rotating exchange of objects. The objects are highly valued in and of themselves, and consist of seashells that have become transformed into armlets and necklaces not meant so much to be worn but adored (since some are actually too physically cumbersome to be borne by a human body). These exchanges take multiple seasons, years, or even decades to play out a single cycle of passing through all the hands of multiple, temporary “possessors.” Along with the other gifts, feasts, and bartering of goods that accompany such expeditions to re-distribute these objects of appreciation, social bonds in each encounter get forged and forged anew, providing moments for objects to bring together rather than isolate, and thereby the high value of both object and social prestige are shared. 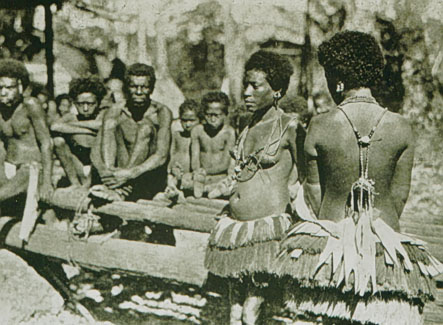 The cultural performance depicted above in the video of the bearded, hatted auctioneer “clucking” in an open barn, points to the utility of offering up items to the highest bidder in an instrumental realm of getting stuff done. It is a much different proposition when the inflation of value associated with objects and images of fine art get caught up in the hyper-prestige realms of connoisseurship that remains an elitist enterprise — arguably a zero-sum game in today’s social economy, where access to educational and cultural resources, such as money and material assets, can be so sorely limited that somebody’s gain really is somebody else’s loss (see the clip from Werner Herzog’s film below).

Coda: All You Need Is Love?

By contrast, I am reminded of “all this love,” an unusually bracing performance by Mica Sigourney as part of the “This is What I Want” Festival in 2012. In it, Sigourney confronted the contractual basis of both art and desire by offering himself up for hire sexually in the context of a series of revealing stories about him by his past lovers. To close the loop here, it’s worth pointing to what he made even more naked and explicit about value – by auctioning off to individuals who were willing to take the lowest bid of cash payment from him (drawing from the fee he received as a performing artist for the event) the opportunity to go on “a date” with him after the show.

Though some clumsy social intimacies hover around the edges of other, benefit events where the services of notable individuals are auctioned off to the highest bidder (dinner prepared by a noted chef, say, or just the dinner companionship of a desirable celebrity), nothing surfaces in such feel-good moments that comes close to the awkward implicated-ness for Sigourney’s attendees promoted by him putting his moves up front and center in a matter-of-fact way. Sigourney front-loaded the challenge of low-ball valuing his body and his company by inviting up on stage behind him at the outset anybody from the audience of strangers and familiars who might want to take him up on the offer of sex for free. Not likely that this uncomfortable-making transgression of the usual heightened social niceties would make its way into the realm of those auctions launched to benefit even the most would-be “alternative” art organizations operating these days. It did, however, serve as a brilliant example of what not only auctions but non-profit arts organizations might do to benefit human social relations and culture at large. 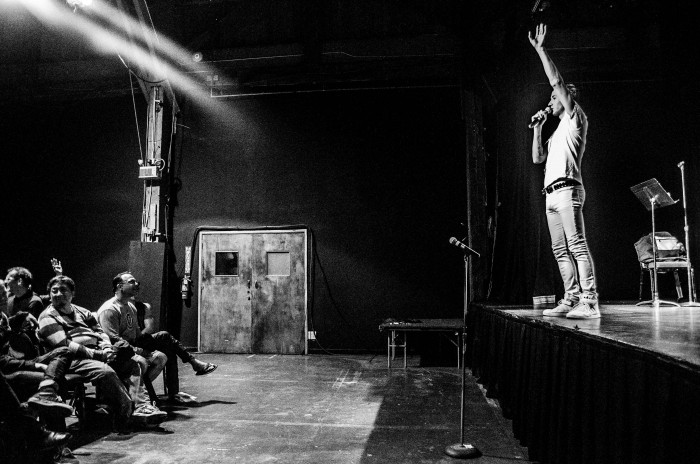 Some previous address to similar topics on Open Space by Anuradha Vikram.