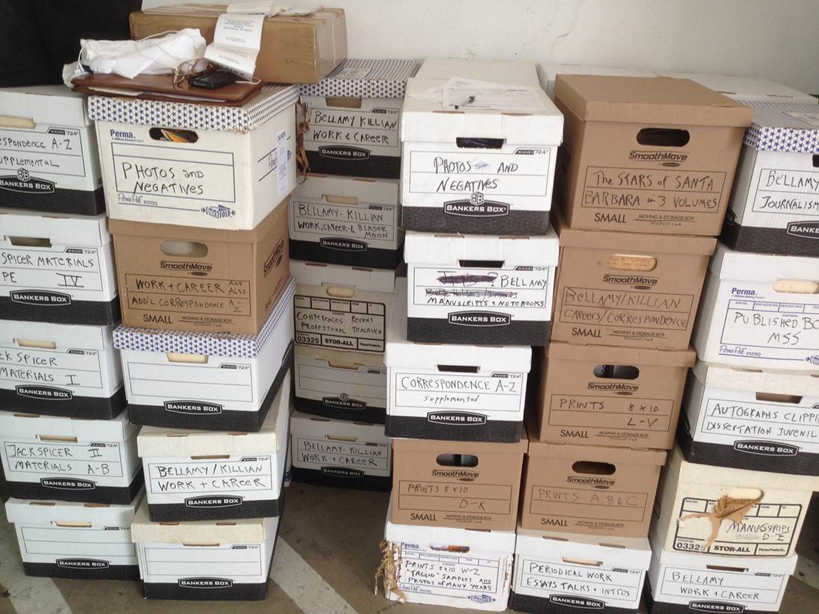 Last August Kevin Killian and I turned over fifty-five file boxes of ephemera to the Beinecke Rare Book & Manuscript Library at Yale.  Negotiations for the transfer, like those in a hostage situation, were long and drawn out, and we didn’t know until a month before it happened if the deal was going to go through. So for two years Kevin and I had this big secret we dared only to whisper to a couple of our closest friends — and we still have a big secret, because telling anybody how much money we received is considered beyond vulgar. This is painful for both of us. Though we spent thirty years of our literary life hoarding its dejecta, our writing has been committed to spewing all sorts of shit nobody else would dare reveal. Hoarders of information we have never been.

Kevin and I don’t have a lot of space. We live in a one bedroom apartment, with a small back porch we use for an office. We used to keep dozens of boxes of whatever in the basement, but one day our landlord made everybody clean out all their stuff, and it’s sort of ruined our lives. Even with a storage unit three blocks away, boxes are stacked everywhere. The storage unit was so full that in order to organize our archives, we rented a second unit for a year. Kota Ezawa also let us use his art studio when he was on an extended out-of-town gig. I feel abject and scattered when I take in the disorganized chaos that surrounds me. Books have overflown their shelves and are stacked in irregular, toppling piles on every available surface. We’re getting rid of half these books, we declare. The last time we did a book sweep we made $500, but the will to do another sweep never seems to arise. It’s both more and less than laziness; it’s the sheer intensity of decision-making that stops us. That book on surrealism I’ve had since high school — to remove it would be like tossing away a part of my DNA. Same with my two copies of Julia Kristeva’s Powers of Horror — even though the parts that matter most to me have long been scanned and stored in the PDF folder on my hard drive, which is backed up both locally and online. As long as there’s an internet and I have money to pay for it, Powers of Horror will never leave me. But when I touch the books, I’m flooded with memories of discovering the lack around which all my writing would henceforth revolve, my brain sparking, my hand scribbling in the margins, purple, red, black.  If I got rid of my two copies of Powers of Horror — even though I know I’ll never read either again — it would be as if I were rejecting my younger self, saying to my younger self I never really valued you.

Way back in the ’70s, my younger self read an interview with Jayne Anne Phillips — this was before Phillips started publishing with mainstream presses — and I remember her talking about the junk piled around the houses of poor people in the South, how by surrounding themselves with all this broken-down stuff, people who had nothing could feel the comfort of surplus. She somehow connected the lushness of Southern writing to those junkyard houses. I think of the stylistic opulence of my first novel, The Letters of Mina Harker —  all the sex, cultural references, quotes, puns, poetry, parody I crammed on top of one another — each convoluted sentence screams THESE WORDS MATTER DODIE MATTERS. If only I’d kept my copy of Jayne Anne Phillips’ first chapbook of stories, Sweethearts, printed in 1976 in an edition of 400. I bet it would be worth something now. That’s the problem with choosing — it cannot be trusted. Invariably, non-hoarding lets you down. 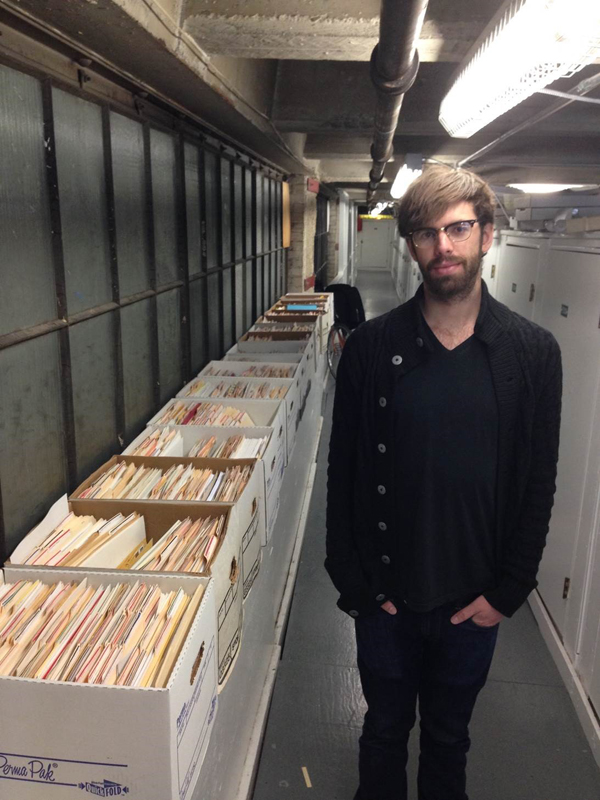 Archivists wine and dine and flatter you until they break through your defenses. It’s like the archivists are Mommy and you’re sitting on the toilet taking your first poo. They say, “Good Dodie!” and you give them whatever they want, even tender bits you know are better kept hidden. What archivists want are singular unique objects, the irreplaceable. All these letters, photos, contracts, yellowed news clippings, flyers, manuscripts — moving my hands across their object auras, the sadness of materiality strikes me, the inevitability of loss. I think of old people getting ready to die and giving away their stuff. I think of schizophrenics who get rid of everything they own, all their money, and set off. I unearth the first two pages of a letter that is so intense it verges on love letter, but the final page is missing and I can’t figure out who it possibly could have been from. A tinge of panic hits me, this sense of a vast past that has vaporized — all that love and anger and realization. My past. The more the papers are organized, I start to think of them as an exoskeleton protecting me from annihilation. The sense of exposure is unbearable. I feel like I’m attending my own wake; I feel like I’m being embalmed. But I bear it because I want the money, want to be remembered — even though the future the archive promises feels impossible. Impossible in that I won’t be here any longer, impossible in that anybody could possibly be interested in my life/stuff. And then there’s my apocalyptic pessimism — it’s hard to believe that human life won’t soon be extinct. Posterity, despite the Beinecke’s climate-controlled storage facilites, may end up being puny. I gave the archivists everything. Everything except my journals and wedding photos and anything to do with my deceased parents. I kept these tokens out of love and a conviction that I’m not finished yet.