Object Labels 101: What are the labels really telling you?

Is an art collection a possession? Is it an expression of taste and desire? Is it a force for progress and social welfare? Regardless of how it is viewed, collectible art is part of a market economy. And whether or not the world is enriched in some intellectual, spiritual, or ethical way by its existence, the art an individual or institution collects is invariably a multifaceted reflection of who they are. The evidence is everywhere, even in an artwork’s object label.

The label alongside an artwork in an exhibition, in its briefest iteration, presents to the visitor certain descriptive essentials like the artist’s name and nationality, the artwork’s title, its date of fabrication, and the materials from which it was made. As a museum convention, the label dates back to the 1830s and Gustav Friedrich Waagen, the first director of the Royal Museum in Berlin. According to Waagen, the label helped the unfamiliar viewer learn the difference between a painting by Jan Van Eyck, for example, and one by Peter Paul Rubens. The utility of Waagen’s label has evolved over two hundred years as a measure of the museum’s promise and a means to its sustainability. On the surface, the object label reflects the museum’s time-honored role as keeper and classifier of treasured objects and artifacts of history. Reading between the lines of the object label there is a legible trace of the social, fiscal, and educational forces underpinning the entire enterprise of museums.

Consider an artwork’s title, or its name. In Picture Titles, Ruth Bernard Yeazell observes that titles were not so common until the advent of an art market in the eighteenth century and the formation of public museums in Europe, where the visitors did not always know what they were looking at. Concurrent with the growth of general public literacy, the rise in print publishing, and the emergence of an academic discipline for interpreting paintings, naming works of art became both productive and essential. Titling was as much a practice of responding to art as of making it, and everyone from artists, dealers, and cataloguers to critics, scholars, and ordinary viewers was doing it.

Or, let’s think about what is typically the last piece of information on an object label, the credit line — the description of how a work comes to be on display or enter a collection. In this country, the credit line reflects a tradition of private-public partnership in ownership that is distinctively American.

When American art museums were established, they embodied the same Enlightenment ideals of their European counterparts but with a few fundamental differentiators. In contrast to European models, where ownership was vested in the state, the monarchy, or the church, in the United States it was upwardly mobile entrepreneurs living the American dream who typically bought and collected art. American art museums have been founded and fortified by enterprising individuals with a passion for art, the wherewithal to collect and own it, and a commitment to public service. Today, the philanthropic covenant is written in the United States tax code.

An artwork’s credit line acknowledges the donor when there is one and describes the transaction using terms like “purchase,” “bequest,” “gift,” or “loan.” Museums purchase art in a variety of ways including from dealers, at auction, or directly from individuals. A bequest comes to the museum under the terms of a person’s will. Outright gifts are straightforward and, in the U.S., individuals receive tax exemptions when they give their personal artworks to museum collections for the benefit of the public. Donors can even allocate a percentage of an artwork as a gift; this is the “fractional gift.” In return, they receive a tax benefit proportional to the fraction given, and retain possession of the artwork corresponding to their remaining ownership interest. With purchases, bequests, and gifts, title is formally transferred to the institution. The term loan covers a variety of ways museums borrow works of art for the purpose of study and exhibition. Loans are made between museums or between museums and private individuals. There is no transfer of title with any form of loan — the works are not possessions of the museum. When an individual pledges a work of art, it is called “promised” gift and it is viewed as a loan until the gift is realized. A credit line remains with the work of art throughout its life at the museum, with the donor’s generosity acknowledged permanently and publicly via the object label.

Everyone who visits a museum knows the experience, even the rhythm, of viewing an artwork, reading its label, and moving on to view the next work of art. Reading the label orients the visitor in the gallery, it situates the artwork in its time and place of creation, and it also sheds light on the historical trail of ownership that is called the work’s provenance. On one level, provenance substantiates the transfer of title. On another, it confers a work’s illustrious ownership pedigree, adding a dimension of significance to the art the museum collects, exhibits, values, and talks about. Behind that small label lies the museum’s complex, interconnected system of art collection, display, and education, fueled by the dual incentives of civic duty and financial return. 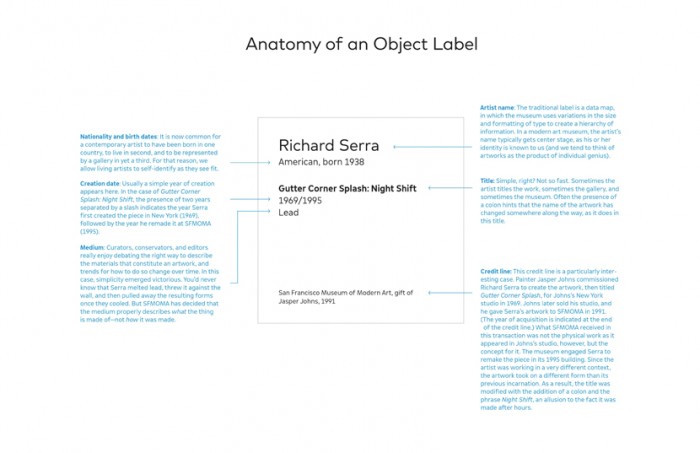