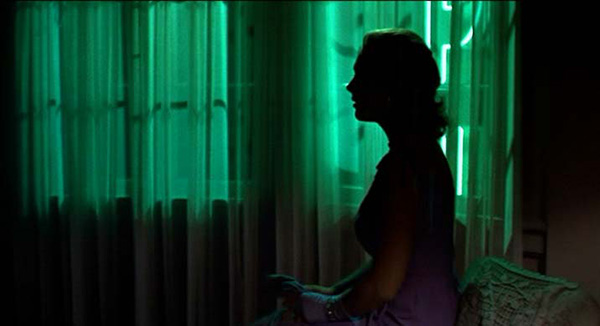 Forgive me, readers, for I have sinned. My last post was over two years ago. You find me still obsessed over the subject of that post, the art work Vertigo, by Alfred Hitchcock, which in recent years has come to be considered the Greatest Film Ever Made. “Stand in line,” you say? Yes, there are all too many of us gaga for Madeleine and Judy, and their tragic saga with Scottie. I can’t claim any special status, except for being just a tad extra unhinged in my reverence. Last time, we found me achieving the Valhalla moment of experiencing a super-rare screening of an original IB Tech 35mm print of Hitchcock’s Masterpiece at the Pacific Film Archive. At the time, I felt this to be the ultimate payoff of a fascination beginning at the age of seventeen, when I got my first movie theater job at the Aquarius Theatre in Palo Alto. I’d just seen Vertigo there for the first time during its long-in-coming re-release in 1984, and it still played the Aquarius for some weeks after I got hired. Between bouts of hawking Coke and popcorn, I’d go in to catch little bits of Hitchcock sorcery. While I’d been moved by that initial screening, now I found myself captivated and entranced by AH’s legendary Mastery. And falling just a bit in love, for in Madeleine and Judy we had two — and, hence, all — women in one.

Cut to decades later. It’s July 5th (Independence Hangover Day) of this present month and year. I get out of a Sunday afternoon screening at the PFA, and power on my phone. Two increasingly desperate messages greet me from my landlords: the apartment below the one I share with my wife and eight-year-old daughter has water gushing from every pore of its ceiling. Maybe we left the faucet in the tub on? I rush back to San Francisco to find firemen have used a ladder to enter our kitchen, and have discovered the source of the problem: a burst pipe in the apartment above ours. Our apartment is thoroughly flooded, and due to various issues, our kitchen and bathroom will have to be redone. Our landlords generously offer to house us for the interim in a hotel of our choosing. Where to go? It’s the height of tourist season, and insurance companies might take issue with the Fairmont or Mark Hopkins. Finally, we settle on the Hotel Vertigo. I’d long been fascinated by this site, built, as I understand it, in the 20s as the Hotel Empire, and appearing under that name as Judy’s residential hotel in Hitchcock’s film. Working one block over at Kayo Books for ten years, I’d inevitably find myself venturing up the hill to check it out under its later incarnation as the York. When it morphed into the Hotel Vertigo in 2009, I have to admit to being a little disturbed: Judy’s Hotel Empire was being Disney-theme-park-icized. I even tended to avoid that block of Sutter St. for a spell. But now, after the levee broke, it was time to reconsider. 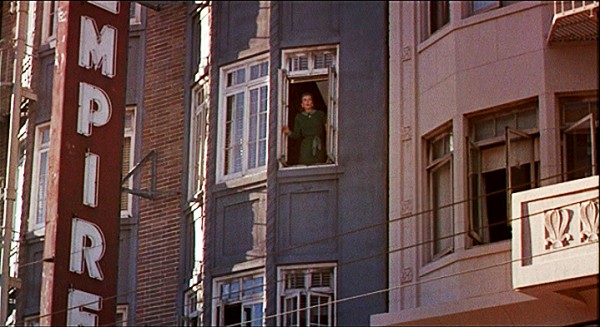 Installed in a back corner room on the sixth floor, we couldn’t have been happier: it was very quiet, and the bay windows opened onto a Rear Window-type backyard-scape, only without visibly enticing or murderous neighbors. Then my girls went out of town for a few days, and I began to feel lonely, even a bit Jack Torrence-y. I began scouting out the hotel in search of mysteries… The elevator’s wallpaper was somewhat in the style of Ernie’s, the restaurant in which Scottie first spots Madeleine, and to which he later takes Judy. (Ernie’s was still open as of when I first brought my wife to San Francisco, but, alas, we never made it inside — back then we were among the vast army of youth which knows not how to properly fear the ravages of time.) The hotel is bedecked with many statues and statuettes (including ones fashioned into lamps) of various animals, especially horses. These seem to reference the plaster horse in Vertigo‘s Mission San Jaun Bautista‘s stable. Each room features a graphic spiral/swirl design rendered onto glass, and mounted on the wall, as painting/sculpture installations. These were some of the obvious features, accessible to all. Then I noticed the room next to the elevator on my floor was named “The Madeleine.” On the floor above, and immediately above “The Madeleine,” I found “The Scottie”. Immediately below these was “The Gavin,” and below them all was “The Carlotta”. Notice something missing? Yep, no “Judy”. How could this be? This bizarre situation led me to two thoughts: 1) 70s Halloween costumes: when I was a kid growing up in the 70s, if you wanted to be Batman or Spider-Man, say,  you couldn’t get a mini replica of the real thing. All that was available was some kind of “artist’s abstraction.” As a kid, I hated this, and wanted only the real thing. Now, far from those days, I love those costumes, and only wish I could go back home again to get at them… Hotel Vertigo is a lot like 70s Halloween costumes, and of course I mean this in a good way. 2) I had to find the real “Judy room.” With help from the gracious staff, I figured out which room it was, and a couple days later, we were able to move in. 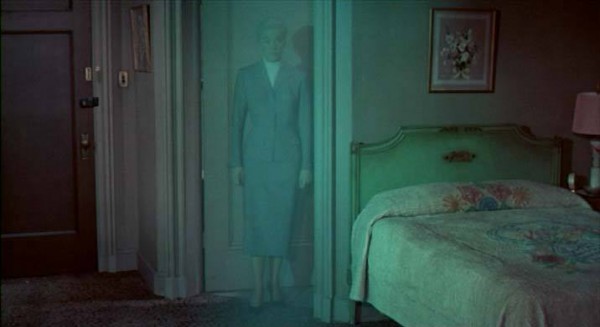 The first moments were a bit like those when Judy steps out of her bathroom costumed as Madeleine, with her hair up: this was THE room, the real room, Hitchcock and his art directing team had scouted, and were at least partially trying to recreate on the studio stage. The green neon “Hotel Empire” sign is long gone, but the room features gauzy curtains over the bay windows framing the view the filmmakers did a superb job of realistically recreating. How can I express what it meant to be here, after these past decades in cultic thrall to the most potently twisted moments in moviedom? I’ve had psychogeographic thrills and chills galore before — especially in my adventures with Brian Darr for Open Space, in which we tracked down the many locations of the most undervalued masterpiece of all time, Christopher Maclaine’s The End. But now I was inhabiting a room in which Judy/Kim Novak once stood, with Mr. Hitchcock standing nearby to give direction. (Kim Novak is said to have later stayed in this room during her occasional visits to SF.) A friend aptly describes it as the “Tristan and Isolde room.” That evening, I watched my daughter play solitaire, sitting in a position very similar to Judy’s at the top of this post.

Was it perhaps at this point I decided it might be time to share Vertigo with her? The hotel provides a player, and a DVD with the essential original mono soundtrack as an added feature. I’ve done my best to foster a reputation as at least a semi-film-purist, and I was holding out hope to share it with her in the form of a future IB Tech screening. But how could we not watch it with her in the Judy room? It was kind of a touch-and-go situation, though. After hearing the adults prattle on about it for so long, she thought it would be too scary, or “too adult and boring.” Finally, she was won over by having it described as a “long, non-scary Twilight Zone episode, but with gorgeous color.” As it turns out, she was involved the whole two hours and eight minutes, and afterwards, though saddened by the denouement, declared it “surprisingly good.” (It of course helped that she’d been to so many of its locations, including the room in which we were watching it.) After we’d talked about it for a little while, I inevitably succumbed to the temptation to attempt the eloquent waxing: “You see, what Vertigo‘s about is the tragedy of…” I trailed off, daunted at the task I’d set myself. How to explain my Jung-derived ideas to an eight-year-old? I was thinking along the lines of how internal images of the soul for men (the anima) are projected onto real women, none of whom can live up to them, if, that is, they can be procured in the flesh. In Vertigo, a man is the victim of a fraud in which a woman who seems to embody all aspects of his anima is set before him, then yanked away, seemingly into death. The woman involved in this plot is meanwhile falling in love with her victim. How could she have known beforehand that Scottie would embody her animus, the contrasexual masculine image of her soul, in person before her? I was musing on the horrific sadness of all this, and how it corresponds symbolically on such a profound level with human life as it’s experienced from day to day, but how to express it to a little girl? And hence my “It’s about the tragedy of…” went dangling. “…Of living and loving?” my daughter suggested. First time out of the gate, and the eight-year-old hit the nail square on the head. 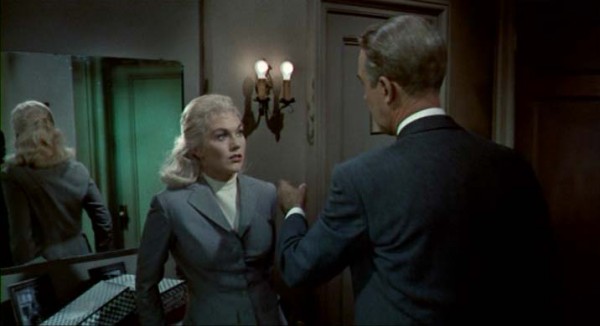 These are scary, vertiginous times in San Francisco. The identity of the city seems to be in flux, yet there is much still to be cherished, loved as it really is. Like many others, I and my family are swooning with the uncertainty, but, despite all, we’re making the most of an unfortunate situation, and are also swooning in thrall to a cultic experience. For the time being, if wishing to reach us, send all mail to the Hotel Vertigo, attn.: The Judy Room.