Judy Must Live! Notes Before and After Seeing VERTIGO in IB Technicolor

Since I first saw Vertigo at the age of 17 at the Aquarius Theatre in Palo Alto, it’s been a fantasy of mine to see it in its original imbibition Technicolor format. Unquestionably the greatest 35mm color motion-picture format ever created — due to its dye-transfer process, which produced prints known for their fantastically beautiful color pallette, and that are highly resistant to fading — IB Tech was tragically discontinued in 1974. Prints featuring its glorious color continue to circulate, however (I’ve projected a number of them myself), so I had high hopes of partaking in a contemporary version of one of the elusive IB Tech screenings of Vertigo that kept the legend of this great work alive during the period the film was withdrawn from distribution in the 70s. As IB Tech prints — unlike all other color film prints, aside from those made in 16mm Kodachrome (which were discontinued roughly around the same time) — show minimal signs of fading through the decades, and as Vertigo is among the most highly prized titles by film collectors, such a screening seemed possible, but as the years progressed, became the ultimate Holy Grail, a cinephiliac craving that seemed unlikely to ever be fulfilled. When I found out, therefore, that as part of its current Hitchcock season, the Pacific Film Archive slipped such a screening in practically unannounced, you can imagine my response. I bought an advance ticket, then lay low. What if something fell through, and my Madeleine of a movie were snatched away? Come the day, tho, and the show clearly not canceled, I made a post on the social media site of note regarding the screening, and then later that night dashed off some impressions, and posted these also. The response to these being positive, I’m posting a version here, as follows: 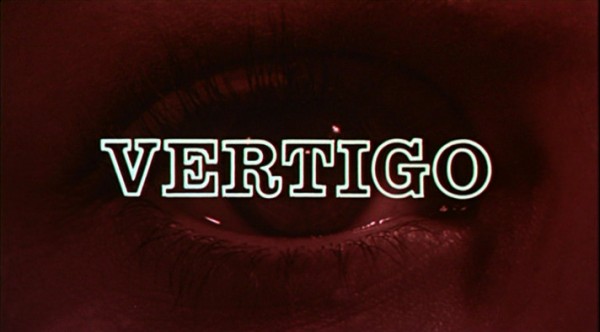 Cannot believe that within a few short hours I’ll be seeing Vertigo, the greatest film ever made, for the first time… How can that be, you ask? The first movie theater to employ me was playing the surprise revival of Hitch’s masterpiece when I started in 1984, and I saw the film then in its unitary form repeatedly, and even more frequently in fragments glimpsed while I was working, amid screenings. Many video and theatrical viewings followed. The sound was fine for these, but the image always dull, a sad stand-in for the original IB Technicolor. Then, in the 90s, came that monstrosity, the souped-up Harris & Katz version, which provided a beautiful (tho non-Technicolor) image with a soundtrack tricked-out to compete with James Bond and Schwarzenegger, complete with additional surround-sound effects the film’s script specifically rejected (“No birds sing,” in a scene where H&K give us a prehear for The Birds). But now — Tonight — the real thing, a true-blue original IB Technicolor print at the PFA… I’d heard of it playing recently in Chicago, and wondered why, WHY could we not have it here in its home of SF, or at least somewhere in the Bay Area? Berkeley will have to do, that’s fine. Berkeley is my birthplace, therefore an appropriate site (at least for me) for this matrix of modern cinema, and the PFA features the best projection this projectionist has ever seen. So excited, it feels like Madeleine is taking a nap in my bedroom… Can’t wait… Where to begin? My in-a-sense “first” viewing — via its original IB Technicolor form — of Vertigo, one of my three or four favorite films, was certainly an experience. Perhaps it was due to the years I worked at Kayo Books, riffling through the pages of ’50s magazines, and their exquisitely evocative color ads, but the indexicality — my physical connection to the images of Vertigo — was never so intense as seeing it in IB Tech. Perhaps this was also due to not having seen it for some time, and having my visceral connection to San Francisco amplified by the many months spent in the pounding-the-streets type research that went into my and Brian Darr’s project to document the locations of Christopher Maclaine’s Great work The End (1953) in the intervening years. At any rate, while I’ve always felt deeply connected to Hitchcock’s film, I’ve never had a viewing more intense… When a friend saw the film in IB Tech some months ago in Chicago, he gave the impression of being struck by its garishness, almost vulgarity. Was it this that led me to experience the opposite response? It was like most other IB Tech prints I’ve seen; wherein the color is more intense, but darker, and the blacks are especially rich… Comparisons with the complex flavors of deeply colored fruits, such as the slightly bitter but fantastically sweet pomegranate come to mind… All the colors & rich textures felt of the period, but paradoxically, all the more vivid, and sprung to life out of its time and into ours… A film, therefore less “in quotes,” in evoking its period, than a bit of that period alive, and less easily digestible, within current time. One image in particular squared with my Chicago friend’s description: the shot of Judy in her fuchsia dress against the lime green neon light of her hotel’s sign bathing her thru her window… Did this contribute to my tearing up throughout this portion of the film? Or my feeling ever more intensely the tragic implications of Scottie in love with Madeleine/Judy in love with Scottie, & their horrific equation/conundrum from which there will be no way out? You bet… And maybe part of the intensity of my response 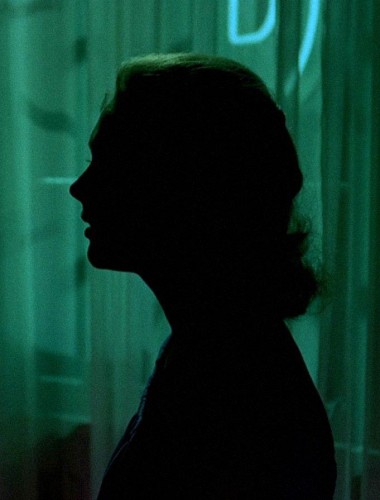 was the growing realization that an Eastman print of this film would now just be an interim step between the “reality” of the film as I was coming to know it, and whatever horrific digital version we’ll be presented with in the future,  but which won’t be Vertigo anymore than Judy can be Madeleine, or Madeleine, as alluring as she is, can have the warmth and humanity of Judy, and which Scottie, often judged harshly for his failure to appreciate it, experienced too late to value properly. This is a long, convoluted train of thought, I know… but my experience of Vertigo in IB Tech has led me to wonder (not for the first time, I admit): will humanity only appreciate cinema (that is, projected celluloid film) after it’s gone? We are a fickle species. There are those of us, however, who will not let it die, despite the predations of pop/industrial culture. Work akin to the real IB Tech Vertigo — in spirit, if not ultimate value — must continue to exist. My own personal tragedy may be the rejection of a “perfect” Madeleine (sterile digital video) for the organic richness of a celluloid Judy. But I embrace my fate, for I embrace love.

Although almost entirely discontinued in the Western world in 1974, the IB Technicolor dye transfer process continued to be used in China until the early 90s, and was revived in the US from 1997-2002. I hope to discuss in future posts why I believe celluloid filmmaking will continue in various forms into the foreseeable future, despite the deluge of mass-media obituaries.