Nothing That Meets the Eye: An Introduction

Patricia Highsmith’s short story “The Great Cardhouse” (1963) centers on Lucien Montelhuc, a wealthy art collector whose passion is hunting down only the most expertly done forgeries of Old Masters, finding “bona fide masterpieces […] too natural, too easy, too boring” … 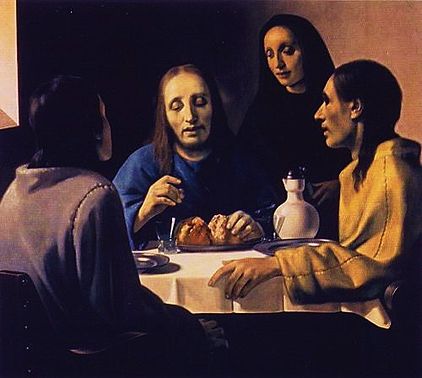 The Supper at Emmaus by Han van Meegeren (1936) which he passed off as a Vermeer.

Patricia Highsmith’s short story “The Great Cardhouse” (1963) centers on Lucien Montelhuc, a wealthy art collector whose passion is hunting down only the most expertly done forgeries of Old Masters, finding “bona fide masterpieces […] too natural, too easy, too boring” (114). Montelhuc’s reputation precedes him in the art world and, like any good pervert, he takes pleasure in the disruption he causes, whether loaning out a forgery to an exhibition under the name of the individual who owns the original or calling into question the provenance and value of whatever has caught his attention at auction.

Montelhuc’s self-satisfaction is rooted in a deeper conviction: that his ability to sniff out only the most convincing fakes puts him in possession of a more discerning eye, a more finely tuned aesthetic sensibility, than those of the experts and dealers on whose “authority” and faith in the sanctity of the genuine article the entire edifice of the market rests. It takes a different kind of sensitivity, he suggests, to truly appreciate the hours of labor and level of craftsmanship that can go into producing verisimilitude, a commitment of time and skill that can even surpass what is evinced in the original.

Montelhuc eventually receives his comeuppance, grossly overpaying for a supposed Giotto that turns out to be authentic. “It will be the one original that will spoil the purities of my forgeries,” he says, reflecting on his humiliation. “Nothing in life is pure. Nothing is one thing and nothing more. Nothing is absolute” (127). It is odd for Montelhuc to speak of his defeat in such terms, given that in the scene prior, he has spectacularly revealed himself to a newfound confidant as being precisely not “one thing.” From his false leg to his prosthetic hand, his grafted ear to his bespoke toupee, Montelhuc, it turns out, is an assemblage of masterful copies, the greatest forgery of all.

These two climactic moments can be read as presenting something of a draw. On the one hand, with the genuineness of the Giotto confirmed, the house – that is to say, the market – appears to have won. On the other hand, Montelhuc’s routine pranking of collectors and dealers calls out the market for what it’s been all along: a house of cards, just as Montelhuc dramatically reveals himself to be. What Highsmith’s story drives home, then, is the chiasmic relationship between the original and the copy, described by Hillel Schwartz in The Culture of the Copy (1996) thusly: “An object uncopied is under perpetual siege, valued less for itself than for the constant struggle to prevent its being copied. It is within an exuberant world of the copied that we arrive at our experience of originality” (125). Schwartz’s counterintuitive formulation reverses the polarity by which originality functions as true north in determining an object’s value, sending the compass needle spinning and necessitating reorientation by other means. 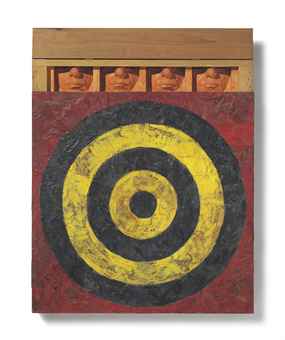 It’s December of last year and I’m at the Museum of Modern Art, standing in front of Elaine Sturtevant’s Johns Target with Four Faces (Study) (1986), having spent the previous hour revisiting Jasper John’s Target with Four Faces (1955)— on which Sturtevant’s piece is based—in a gallery one floor up. I chuckle, partly to reassure myself that I’m in on the joke hanging in front of me, but also as a preemptive defense in case I’m not getting the joke. But as I keep on looking, it dawns on me that what I’m looking at might not be a joke at all. Likewise, the phrase “on which Sturtevant’s piece is based” doesn’t quite summarize the complicated mimetic relationship between Sturtevant—who, tellingly, made work under only her last name—and Johns. As she did with her versions of pieces by Warhol, Haring, Rauschenberg and Oldenburg—which are also on view—Sturtevant created Target from memory, studying the Johns’s original closely, along with catalogs (but, critically, not photographic reproductions) of his work, to note its materials, physicality and dimensions. Neither solely a replica nor an attempted forgery, Johns Target with Four Faces (Study) is a something else which asks viewers to confront what it is that we see in the original—what she has called a piece’s “characteristic force”—that allows us to say “that’s a Johns.” As Bruce Hainley puts it, writing on Sturtevant: “[She] discerned a way to present what you cannot see as what is seen” (77).

Rather than reifying the original’s status as such, the attempted fidelity of Sturtevant’s versions estrange us from the criteria by which we would claim to know an art work for what it is. In a reversal of the famous juridical definition of porn, we no longer know by what we see. Something akin to a renewed awareness of this foreclosure crept up on me in the time I spent with the Sturtevants, which also serves as a reminder that Schwartz’s world of the copied has been ours for some time now (the least surprising thing about Sturtevant’s art is that she started making it in the sixties). Indeed, after Benjamin, after Warhol, after Postmodernism, after the Internet, Schwartz’s characteristic “exuberance” might as well be swapped out for “ubiquity.” That nothing is one thing and nothing more is itself nothing new. At the same time, Sturtevant’s project dares us to go further than Montelhuc and his valorization of artifice.

I’d like to use my time here on Open Space to respond to the challenge I see put forth by Sturtevant and articulated by Hainley’s writings on her. That is, to consciously uncouple looking from knowing while treating the persistence of the multiple as a given, rather than as something that necessarily need be championed or decried. To this end I’ll be thinking through the aesthetic and affective fallout from some of the more curious, banal and recalcitrant byproducts of our culture of copies: the replicas of artworks created for biopics of famous artists; the dilution of particular artistic sensibilities into readily consumable styles; and the efficacy of iconoclasm in a time of rampant and strategic image manipulation. To paraphrase Montelhuc’s dismissal of the real McCoy, I anticipate that making a case for why such remainders are worthy of our attention won’t come naturally or easily, but it is my hope that, at the very least, the results will be far from boring.