James Franco: To Barf or Not to Barf, That Is the Question 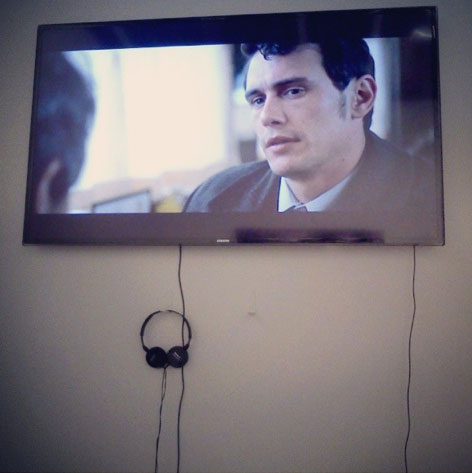 As the saying goes,  if everybody hates you, you must be doing something right, right? So what happens when both of the top art critics in New York slam your work on two different days, delivering a one-two knockout punch? It’s enough to drive most artists to suicide!

The question is, do you go down for the count or do you to get back up and try to keep fighting? Jerry Saltz went so far as to say that George Bush is a better artist than James Franco. Roberta Smith pleaded for someone  to get him to stop making art.

Sure, maybe Franco is guilty of overexposure. But so what? Isn’t getting attention the goal of countless BFA and MFA grads across the country?

While it’s true that he is not rocking the art establishment with iconic masterpieces (yet), he is, however, revealing just how small the art word really is. Like him or hate him, his work is just another reminder that people with a lot of money and fame can always find an open door waiting for them in the art world. That might explain the enmity in part, as critics may feel obligated to pretend it just isn’t so. But it is and always has been.

Besides, the famous use art for all kinds of things. Bush uses his “art” to help soften his image and rebuild his brand. Sylvester Stallone used painting (yes, he paints) to soften his tough guy, mass-killer persona and to seem more intellectual. James Franco, he makes art because he can, and maybe because he likes to do it. What’s the harm in that?

But if you really want to blame someone, blame the artist Carter for making the art film Erased James Franco (2008). That film may well have been the catalyst that encouraged him to pursue art making at a higher level. On one hand the film is an obscenely narcissistic exercise that has the actor reenact every film and television role he’s ever had up to that point, but on the other hand it’s really good art and it stands out even in New York, where there is a lot of good art.

Who knows — if one took the time and actually made the effort to watch Erased James Franco and Carter’s newer film, Maladies (also with Franco), the New Film Stills pictures might actually make sense. Or consider that just last year Franco was also exploring some issues of identity in drag, but in a whole installation called Psycho Nacirema, which had him portraying/reimagining the role of Janet Leigh in Hitchcock’s Psycho. In that body of work it was clear he was an actor riffing on issues of cinema.

Cindy Sherman, though, is not known as a filmmaker, and so she is coming from a very different artistic tradition, if we understand that still photography is wholly distinct from cinema with a capital “C.” Maybe it’s for this reason that Franco’s New Film Stills gets people all riled up. He’s mixing traditions. As a result, New Film Stills is left vulnerable to all kinds of attacks. But still, it’s hardly the worst show ever exhibited in a Chelsea gallery.

Dump on him all you want, but here is a guy who is working all the time, night and day. He travels and constantly contributes to all kinds of projects. He even starred in Bay Area author Stephen Elliot‘s indie film The Adderall Diaries, despite very low pay and uncertain scheduling. Elliot recounts the story in the Believer. Franco also contributed an artwork to Jonn Herschend and Will Rogan‘s THE THING Quarterly. He played one of Harvey Milk’s boyfriends in Gus Van Sant’s MILK.

So as an actor it’s no wonder he would gravitate to Sherman’s work for inspiration.

However, when asked, Cindy Sherman told Gallerist, “I can only be flattered. I don’t know that I can say it’s art, but I think it’s weirder that Pace would show them than that he would make them.”

While I get the criticism, I’m just saying it could be worse — far worse. He could be trying to imitate Mark Kostabi (double barf), Andy Warhol, or Joseph Beuys. But hey— he’s not. Instead, he’s exploring issues of identity and personhood as well as authorship and cinematic tropes in exactly the way one might expect an actor to do.

Here’s an interesting question: why is it art when Carter or Stephen Elliot or THE THING Quarterly work with Franco, but when he makes his own work it’s trash?

It’s something to consider.